“The future has arrived … historical event,” the chorus sings, quoting an ad that appeared some years ago promoting the latest new hand-held Apple computer.

The subject could just as easily have been the future of opera, a future that blazed brightly on the big outdoor stage of the Santa Fe Opera last weekend as a capacity crowd cheered the premiere of a dazzling high-tech production of an imaginative new work about an unlikely subject, “The (R)evolution of Steve Jobs.”

Jobs, the college dropout who teamed up with Steve Wozniac in 1976 to sell personal computers in Jobs’ garage, eventually revolutionizing the computing industry and becoming one of the most influential figures of our time, emerges in this narrative much as the world came to know him – or at least as thought they knew him — a quirky, complicated, driven perfectionist, “all loose wires” and “broken parts,” in the words of Jobs’ Buddhist teacher Kobun, “a genius or a psycho” in the estimation of his girlfriend Chrisann, whom he eventually jilts.

Minnesotans, as it turns out — or let’s say adopted Minnesotans — made this impressive project happen. Mark Campbell, a New Yorker who has written five acclaimed librettos for Minnesota Opera, including the Pulitzer Prize-winning “Silent Night,” crafted the witty, insightful libretto for “Steve Jobs.” The director of the production, Kevin Newbury, has also worked extensively with Minnesota Opera, having staged traditional works here as well as two new operas, “Doubt” (2013) and “The Manchurian Candidate” (2015).

Michael Christie, Minnesota Opera’s music director and chief conductor, presided in the pit last Saturday night, giving careful guidance to the pulsating yet delicate electro-acoustic score by 40-year-old Mason Bates, recently named the most-performed composer of his generation. Completing the list was Daniel Zillmann, former director of public relations for Minnesota Opera, now the “guru of social media” at Santa Fe Opera, as company manager Charles MacKay, describes him. Zillmann was credited with devising ways to attract the unusually large number of young people to the opening-night performance, most of whom clutched their smartphones as they entered the theater. 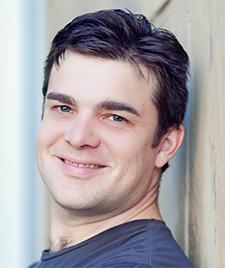 The opera begins in 2007 at a crucial time in Jobs’ life: his unveiling of the “one device” (the unnamed iPhone). He is seriously ill but won’t admit it. (Jobs died of pancreatic cancer in 2011.) The story then circles back to depict the people and experiences that shaped him: his father’s encouragement, his relationships, his rise and fall as an entrepreneur and, ultimately, his marriage to Laurene Jobs, who shows him the importance of human connection as well as connection to the universe.

The opera’s title suggests Jobs’ personal evolution but also revolution not in the sense of overthrow but of revolving – a return to the beginning, in other words, which in turn reflects the Buddhist notion of life moving not forward but in a circle, endlessly repeating.

The ending is solemn and ethereal. But much of Campbell’s libretto is witty and playful. Jobs gives a lecture in San Francisco in 2007, recalling a quote from a 1948 issue of Popular Mechanics: “Computers in the future may perhaps weigh only one-and-a-half tons.”

In 1986, during one of his frequent in-office battles, an Apple board member suggests that the company, with profits dropping, should seek the advice of focus groups. Jobs sneers “What the hell for? Henry Ford said, ‘If I asked people what they want, they’d ask for a faster horse.’ ”

Bates’ score has equally playful moments. Powerful brassy passages alternate with the gentle sound of acoustic guitar. For each of the main characters there is a specific sound world: Tibetan prayer bowls and soft Chinese gongs for the Buddhist temple scenes; a bustling mix of orchestra and electronics for Jobs; a grounded sense of calm for Laurene.

“Mason is changing what opera sounds like,” said Campbell. 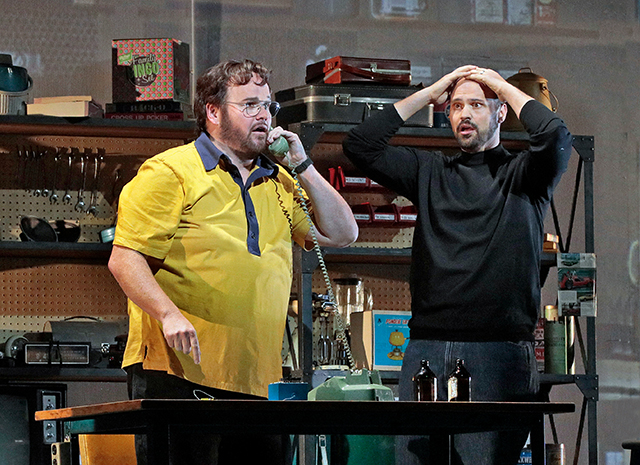 Ken Howard For Santa Fe Opera, 2017
Garrett Sorenson as Steve Wozniak and Edward Parks as Steve Jobs in “The (R)evolution of Steve Jobs.”

And also what it looks like, one would have to say having seen Newbury’s eye-filling staging, a collaboration with designer Victoria “Vita” Tzykun that makes use of ever-shifting screens and projections (by 59 Productions) that seemed to take us into Jobs’ mind and memory. The uniformly strong cast was headed by baritone Edward Parks, who on his first appearance on stage got big applause from the audience, presumably because he looks so much like Jobs. Sasha Cooke was the sensitive Laurene and Wei Wu the droll Kobun, who tells Jobs on their first meeting, “I’m your spiritual mentor. I’m always around. Lucky you.”

“The (R)evolution of Steve Jobs,” an important, often thrilling new work, continues at the Santa Fe Opera through Aug. 25. A commercial audio recording will be released next summer. The production will move on to Seattle and San Francisco next season. Perhaps Minnesota Opera, with its sterling history of presenting new works, will stage it one day.