“Without a doubt, there are some absolutely wonderful things about being a man, but at the same time, there’s some stuff that’s just straight-up twisted,” A Call To Men’s CEO Tony Porter said in a TED Talk in 2010. Seven years later, A Call To Men’s mission to bring attention to the dark side of masculinity and manhood is more vital than ever. The United States has elected a president whose sexism has been regularly countered by the likes of the worldwide Women’s March movement, and, locally, by the ongoing work of the 34-year-old Women’s Foundation of Minnesota.

The Women’s Foundation is the oldest and largest statewide women’s foundation in the nation, a force for gender equity, and the lead sponsor of A Call To Men’s national conference Sept. 14-15 at the Hilton Minneapolis in Bloomington.

For over 20 years, A Call To Men has been challenging men to think more deeply about themselves and about their own anger, insecurity, jealousy, and vulnerability, the stew of which too often leads to domestic violence, cases of which Porter said are “at epidemic proportions” in America. According to its website, A Call To Men “partners with schools, universities, corporations, government, social service agencies, military installations, and communities to end all forms of violence and discrimination against women and girls.”

To preview the September conference (theme: “The Many Faces of Manhood”), MinnPost chatted with Porter by phone from his home in Charlotte, North Carolina.

MinnPost: A Call To Men’s annual conference is in Minneapolis in September, with the theme “The Many Faces Of Manhood.” What is the state of manhood in 2017, and what are those faces?

Tony Porter: What we’re trying to do is to get men to look at their authentic self, and that authenticity will create the many faces of manhood. Far too often, men are contained in what we call the ‘man box,’ and that man box pretty much requires men to look at manhood in one specific way: We’ve got to act tough, we’ve got to act strong, we’ve got to show no fear, no pain, no weakness; we don’t ask for help, we’re taught not to express emotion — with the exception of anger.

So much of what we’re taught as men distances us from what we perceive to be the experience of women and girls, so collectively speaking, from a place of socialization, we’ve created this somewhat robotic experience of defining what it means to be a man. A big part of A Call To Men is for men to release themselves from these rigid notions of manhood, to step outside the man box and be your authentic self.

MP: Knowing what you know from your work and studies, in the last 24 hours, is there a news story that gets you thinking about the man box and how it’s manifested? You must see it every minute of every day. What’s the most recent example?

TP: You’re 100 percent right. Once your cultural lens is enhanced in this respect, you see it everywhere. Just this last hour, CNN was doing a story about a man who killed his wife on a cruise ship and dragged her across this ship. He killed her supposedly because she was laughing at him, and men have this strong sense of pride and she’s laughing at him. Men have this thing about being vulnerable, and we’re afraid to be vulnerable and she’s laughing at him, so in his mind she’s demeaning him, in his mind she’s saying he’s of less value so, ‘How dare you do that to me?’ In his mind, she’s part of his property, so he can do with her what he chooses. So not only did he kill her, but I read that people watched as he dragged her across the ship. I want to know, what did those people do? And that’s another socialization of men, that silence around what other men do.

MP: I can’t help but think that it’s connected to the messages we get from the fact that there are a lot of angry white men running the country. In that respect, it seems that men, and gentlemen, have taken several steps backward to the point where sexism and bullydom and narcissism are acceptable, thanks to this presidency.

TP: I’m not sure I’d say men have taken several steps backward, as much as I would say that manhood has become comfortable saying and showing its full face. I think that what we’re experiencing with the political climate has always been there, it’s just that there’s a comfort level with saying [sexist remarks or actions], ‘Yeah, so what?’ Political correctness isn’t as recognized as it was a few years ago, but more so than that, everything is on the table now. For people who do the kind of work I do, as challenging as these times are right now, they’re also exciting because everything is on the table that has been under the rug. We’re being given the opportunity right now to really address men being comfortable in their whole self rather than just their role self.

MP: What strides have you made in your work with A Call To Men that points to progress in manhood? What tangible changes in manhood have you seen? What gives you hope in terms of seeing examples of good men out there who are not bound by these historically specified roles?

TP: Sports and the military has been a big focus of A Call To Men, because those are men’s clubs, places with hyper-masculinity. We’ve also gone into barbershops, where people feel comfortable saying everything, but in the last 20 years, the barbershop has changed a lot.  Now in barbershops, along with everything else, there are conversations going on about equality and equity and authenticity. We go into high schools and talk to boys about all this. And with law enforcement, it used to be if a man beat his wife and the police were called, 20 years ago the policeman would’ve taken the man for a walk around the block and chastise … That’s changed a lot.

We’ve also seen great strides in talking with boys about gender norms, and gender equality. We see a lot of folks who are standing side by side with the LBGT community — that’s not something that took place 10 years ago. We have folks now who identify themselves as gender nonconforming, and young people have been given more permission than ever before by society to question gender norms, and that’s something very new in the last 15 years. We’ve made huge, huge strides. 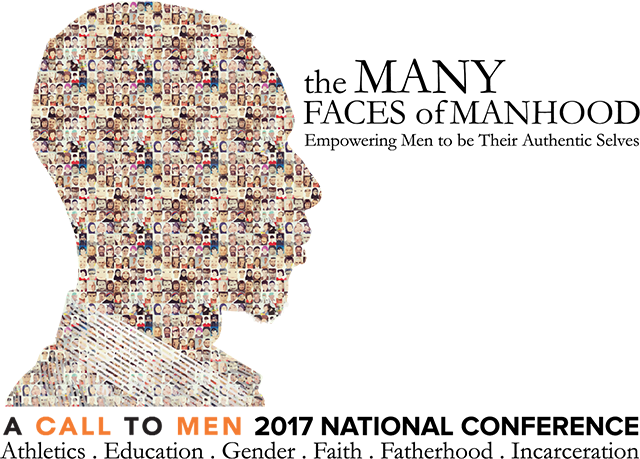 MP: That’s got to be gratifying, knowing that A Call To Men has been part of the change.

TP: I do have that gratitude, but at the same time we live in a society where one of the leading causes of injury to women in the United States of America is men. Men’s violence against women is at epidemic proportions. We know that one in five women will be sexually assaulted during their first year of college. We know that every six seconds a woman is a victim of domestic violence. We know that one third of all women killed in this country are killed by men that lived in the home. We know that with the work that is being done, we have so much more work to be done.

MP: Where does that message come from — that it’s OK to hit or abuse or kill women? Is it media, culture, family — where does it start?

TP: It starts with the socialization of men that teaches men to have less value for women and girls. We don’t say, ‘Go hit women,’ but what we do teach boys is that the way to become men is that men are more important than girls. That’s why a coach will say to a boy, ‘You play like a girl.’ Well, we teach that women are weaker, and are property of men, and through the entertainment industry we’re taught that women are physical objects, and when you put that all together it [adds up to] violence against women. We’re all part of this dehumanizing of women.

MP: How did you grow up, and, to use the word, get ‘woke’ to the idea of working with men and working against domestic violence? Personally, how have you defined your own manhood?

TP: I grew up like most boys. I grew up in the inner city in New York, between Harlem and the Bronx. I received all the messages that we all receive, but my transformative moment came when I worked as a social worker and director of an alcohol and drug treatment program. Most of the men and women experienced domestic violence, and women speakers would come in to talk. … I became aware of the socialization of men, and I began looking at it from the social justice aspect. They asked me questions about being a man, and about the need to dominate, and my own sexism, and you know what? From my place of privilege, I had never paid attention to that. So they began to work with me, school me, teach me, educate me.

MP: Like most human beings on this chaotic planet, we men need some guidance. What will happen at the conference in Minneapolis and what are your goals for A Call To Men going forward?

TP: You’re 100 percent right about guidance, because you’ve obviously been paying attention. I want to say here that it’s really important to mention that we would not be able to hold this conference without the help of the Women’s Foundation of Minnesota under the leadership of Lee Roper-Batker.

They have supported this conference, along with other women’s foundations across the country, and leaders like Lee are pioneers in this work and in our moving forward. So much of our work and opportunity to do this work, to tell you the truth, is women giving us the opportunity to communicate our message around healthy manhood. We’ll be looking at manhood through the lens of fatherhood, issues around black men and white supremacy, parenting, gang violence, spirituality, activism, and trafficking, which is a big issue for the Women’s Foundation of Minnesota.

A Call To Men: Stepping outside the ‘man box’