Men are creeps who get away with being creepy, and one need only look at the “locker room talk” that didn’t keep Donald Trump from reaching the White House and influencing others to conclude as much.

But not all men. For one, Ramsey County Attorney and Women’s Foundation of Minnesota trustee John Choi has been known to tell a story that epitomizes how men belittle women, and what men can do about it. He told MinnPost the story before taking the stage Friday morning to address the 300 attendees of the anti-domestic violence and pro-men’s sensitivity training nonprofit group A Call To Men’s national conference at the Hilton hotel at the Mall Of America.

“I play hockey, and after the games we always go out for a beer,” said Choi. “Just a bunch of guys eating chicken wings and watching football or whatever’s on TV. And there’s always this one particular guy who’s always commenting on the waitress. He’s married, etc., and it just starts bugging you a little bit, and you’re just, ‘I wish he’d stop saying that,’ and he doesn’t stop saying that and one day I just said something to interrupt it. I can’t even remember what it was I said, something like, ‘She’s only half your age.’

“To interrupt something like that is the approach, right? And, yeah, the whole table kind of went silent. After a while, it just got grating, like, ‘I don’t want to hear this anymore.’ For men, it’s that easy — stepping outside of that. Our culture is to not do that. Our social structures and the ways we’ve been raised, you’re supposed to laugh at that, right? We’re allowed to have this. And so what you’re doing is you’re stepping outside and saying [‘enough, already’]. So that’s the hard part. That wasn’t an easy thing, even though who I am, I advocate on these kinds of issues, but you’re also in a different social environment so you’re thinking, ‘I don’t want to be a jerk about this’ in a Minnesota way, but then after a while it just becomes ‘This is really bad, I don’t want to be a part of this anymore.’ But it takes a little bit of courage to say ‘Hey, knock it off.’ “ 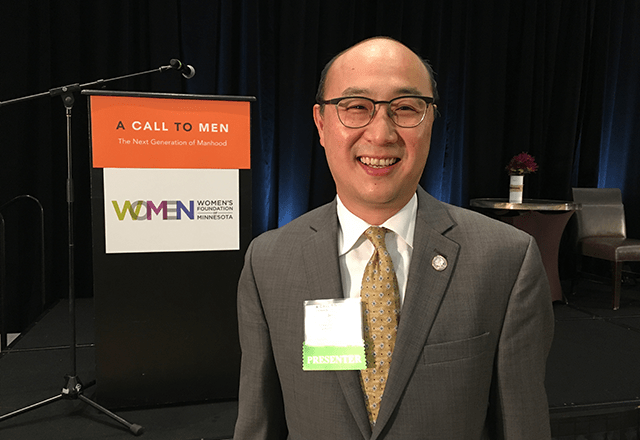 MinnPost photo by Jim Walsh
Ramsey County Attorney and Women’s Foundation of Minnesota trustee John Choi: “It takes a little bit of courage to say ‘Hey, knock it off.’ “

This writer recently lost a friend who made a sexist comment that couldn’t be ignored, and Choi and A Call To Men’s work was on my mind during that short, heated exchange. The fact is, men taking a stand against seemingly small everyday expressions of sexism – and thereby redefining masculinity and manhood – has never been more important – especially at a time when the current president of the United States thinks it’s OK to grab women by the genitals and talk about it like it’s sport.

In an America turned upside down, the group gathered at the A Call To Men conference (theme: “The Many Faces of Manhood”) Thursday and Friday in Bloomington offered a refreshing polar opposite to the version of manhood being proffered in Washington, D.C.

“That message that our president said about sexually objectifying women happened because there’s a culture that allows it,” said Ted Bunch, A Call To Men’s co-founder and chief development officer. “He was able to say it, he was able to get away with it, he was even able to be voted in as president with it existing because there’s a culture, even with the excuse of ‘locker room talk.’ That’s a way of dismissing it. It’s a way of letting men off the hook.

“So we have a culture that is really constructed in a way that women are devalued, women are seen as property, women are seen as objects. Unfortunately, his comments are not unusual. That’s what we’re working against, that’s what this work here at the conference is all about — that most men don’t connect that there’s a problem unless we’re talking about the women and girls in our lives. We try to raise the awareness that we have to accept some responsibility as men for what other men do. We have to start shifting the narrative, because these rigid notions of manhood are not only harmful to women and girls, but they’re harmful to ourselves as well.

“Even with the president’s comments, or men who make comments like that, if we start steering the boat this way, they’ll come along, because they’ll want our respect, the respect of other men. So if we can redefine manhood by not saying things like that, then they’ll stop saying them. But we say them because that’s one of the ways we bond with men — at the expense of women. So it’s really about a cultural thing, it’s not just one individual.” 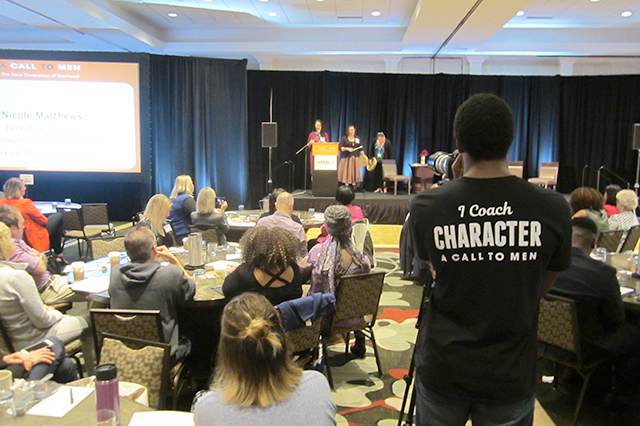 MinnPost photo by Jim Walsh
The two main elements that panelists and speakers returned to often were love and learning.

Given that sexism has received a new stamp of approval in America, the conference provided an oasis of high-level thought and well-meaning cheerleading for a long overdue rethinking of masculinity, and addressing problems of men behaving badly.

Over the course of the two-day conference, attendees took in performances by spoken word artist Guante, dance troupes, and a jazz group; speakers held forth on topics ranging from men embracing their authentic selves to changing sports cultures, and panels and break-out groups tackling topics such as “Healthy Manhood: Addressing The Challenges and Experiences of Men of Color,” “Fatherhood and Filling the Gap of Fatherlessness,” “Addressing Male Domination in Whiteness and White Supremacy,” “Black Lives Matter Includes Black Women and Girls,” “Hazing and Other Male Rituals,” “Men’s Work: Addressing Commercial Sexual Exploitation,” and “Trauma and Healing for Men.”

For all concerned, the two main elements that panelists and speakers returned to often were love and learning. Love was mentioned as often as it is in any church, and learning, growing, and understanding others was the collective point of the heady two days. To be sure, even when some of the presentations were too academic or prosaic, the intentions on making the world a better place, and the information on what makes men tick and trigger were big-picture edifying. 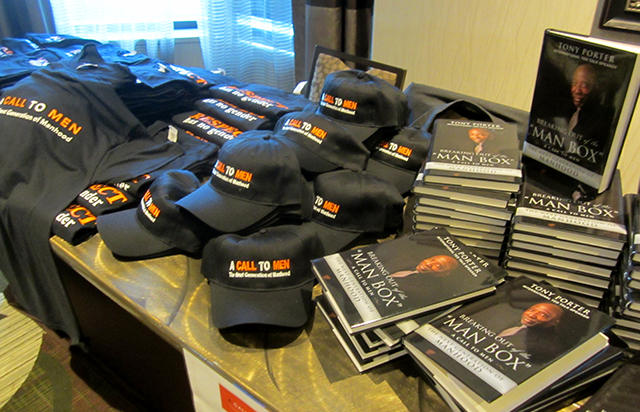 MinnPost photo by Jim Walsh
A Call To Men T-shirts and books on display at the conference. 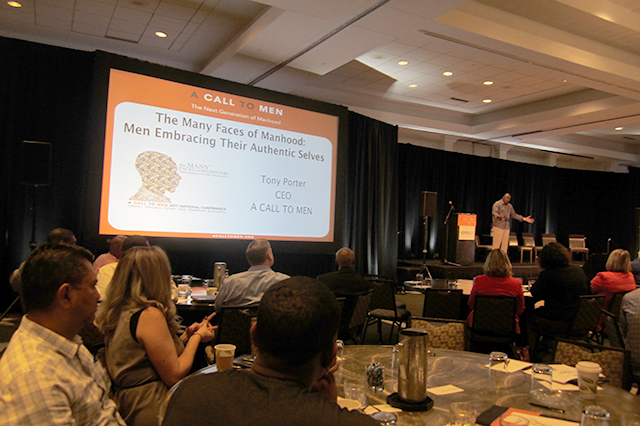 “Just given the climate we’re in, we need to be intentional,” A Call To Men CEO Tony Porter told the conference Thursday morning. “At A Call To Men, we hold out hope for men who foster violence on women and girls, but we can’t count on them. I believe the men in this room can help. We believe that the more we promote healthy, responsible manhood, the more we decrease violence against women and girls. To do that, we need to create healthy spaces for men to be their authentic selves, and that’s what we’re here for.”

Silence is violence: A Call To Men conference encourages men to speak out against sexist behavior