When people fantasize about making it in the music business, they probably don’t picture themselves sitting alone in a windowless office. But somebody has to count the merchandise money and organize things. At Doomtree Records, that person is CEO and beatmaker Aaron Mader, better known as Lazerbeak — ‘Beak for short.

“It always felt so make believe for so long,” says Lazerbeak of his music career. Having a business card that says CEO still seems “kind of ridiculous,” he admits.

Lazerbeak is part of the Doomtree collective, whose members include Dessa and P.O.S. Though the collective’s membership has ebbed and flowed over the years, Lazerbeak has been a stabilizing presence from the beginning. “I was asked to join Doomtree before I even knew how to make a rap beat,” he says.

But these days, while the rest of the Doomtree crew makes music or tour, Lazerbeak works 9-5, toiling away at his never ending to-do list.

From beats to beanies

Lazerbeak wasn’t always the guy who tapped away at his laptop in a spartan office surrounded by half-opened cardboard boxes. Most Doomtree members met back in high school, and in their early years the members divvied up tasks. Lazerbeak started out as the group’s archivist. Translation: He photocopied press clippings and kept them in a filing cabinet. It was that long ago.

As Doomtree Records grew, Lazerbeak stepped up and eventually became CEO. That might sound like a glamorous title, but in reality, Lazerbeak spends most of his time toggling between Google docs and solving mundane problems.

Case in point: Lazerbeak’s iPhone lights up with a call from Doomtree member P.O.S, who’s touring a new solo album.

“I was just calling you about the merch for your tour, like pins and beanies,” explains Lazerbeak.

The conversation gets granular. Should the beanies have an embroidered patch? Should the pins be sold in packs of five or four? Lazerbeak taps away at his laptop. By the end of the call, his to-do has grown longer.

Lazerbeak has learned how to keep that list in check, but a few years ago, he became so overwhelmed by his CEO responsibilities that his physical and mental health took a major nosedive. 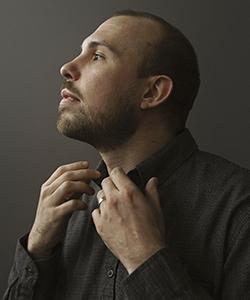 It was 2015, and Doomtree had decided to host a daylong music festival called the Doomtree Zoo to kick off their second decade together. It was up to Lazerbeak to deal with all the details of this mammoth event at CHS Field in St. Paul, including catering, insurance and security. He managed to get it all done, but his efforts came at a high personal cost.

“Every day I think I sunk down further into this rut to the point where I think I lost 30 to 40 pounds by the end of it,” he remembers. At night, he’d stare straight ahead like a zombie at the dinner table. He says he couldn’t really take care of his three kids. He was hardly sleeping.

Lazerbeak’s bandmates noticed that he was struggling. “We knew he was short tempered and maxed out and that daily activities like eating and sleeping were interrupted,” remembers Dessa. “He had this sense of anxiety that just wouldn’t quit.”

After the festival ended, Lazerbeak went to see a doctor and got on low-dose anti-anxiety medication. He’s feeling better now, and to keep things balanced, he meditates using an app on his phone.

On the day I visited, just as Lazerbeak was settling in to meditate, an email landed in his inbox. A graphic wasn’t rendering correctly on Doomtree’s website. Could Lazerbeak fix it? Lazerbeak replaced the image. A few minutes later, he closed his eyes and eased back into meditation mode with some deep inhales and exhales.

“If you’d told me five years ago I’d be into meditating, I would have not believed you,” he confesses. Now he keeps three post-its on the wall above his desk: BE CLEAR. BE AWARE. BE PRESENT.

Ten minutes later, with meditation crossed off his to-do list, he returns to his steady tide of tasks.

“Everybody on Doomtree benefits from the hours that Lazerbeak spends typing,” Dessa says. “Every moment that ‘Beak spends making sure that Doomtree is running and functional is another moment that every artist can spend on their art.”

Doing the dumb stuff in order to do the cool stuff

Before Lazerbeak became a dad, he supported himself by delivering pizzas while making music on the side. But as he prepared to start a family, he faced the looming pressure of how to make what he calls “a valid living” beyond pulling in about $15,000 a year. So he made the decision to “hustle hard” and pursue other facets of the music industry beyond being an artist. These days, the financial stability he gets from being Doomtree’s full-time CEO makes it possible to work in music and still pay his mortgage.

Still, in a perfect world, Lazerbeak would spend most of his time making beats.

“I wanna make more beats. I would love to eliminate all the things on my to-do list. Because I don’t love doing a lot of those things. But when I’m doing the really dumb stuff, I am still recognizing that it’s allowing me to do the really cool stuff.”

‘Kind of ridiculous’: a day in the life of Doomtree’s CEO