After much budgetary and climatic drama, a St. Paul ice palace rises again. With the annual Winter Carnival open now, the icy structure stands ready to showcase the winter-loving spirit that sometimes thrives in the hearts of urban Minnesotans.

To me, the palace is a delightful sight because, though St. Paul ice palaces have been around for over a century, it was always in an intermittent way. Their mercurial nature gives them an untethered place within civic memory.

My personal sense of ice palaces comes from a mishmash of childhood memories. For example, as a child I always imagined that ice palaces ought to look like Lego castles, of which I also had quite a few. I wanted the city’s palaces to bear typical castlelike features: walls, towers, battlements, staircases, arrow slits, and, ideally, a structural keep with something akin to floors and ceilings.

Another ice palace archetype comes from F. Scott Fitzgerald’s 1920 short story, “The Ice Palace,” which I read in my early teenage years, receiving a thin volume of Fitzgerald stories for Christmas. The story isn’t a great work of fiction, but does feature a rare literary depiction of a St. Paul ice palace, which, in the tale, serves as a blunt metaphor for Midwestern inhospitality.

After another ten minutes they turned a corner and came in sight of their destination. On a tall hill outlined in vivid glaring green against the wintry sky stood the ice palace. It was three stories in the air, with battlements and embrasures and narrow icicled windows, and the innumerable electric lights inside made a gorgeous transparency of the great central hall. Sally Carrol clutched Harry’s hand under the fur robe.

“It’s beautiful!” he cried excitedly. “My golly, it’s beautiful, isn’t it! They haven’t had one here since eighty-five!”

Somehow the notion of there not having been one since eighty-five oppressed her. Ice was a ghost, and this mansion of it was surely peopled by those shades of the eighties, with pale faces and blurred snow-filled hair.

The denouement comes a bit later, when the main character, a young bride named Sally Carrol, gets lost and trapped inside the labyrinthine palace. It does not end well for her, and she retreats from the mysteries of the carnival to the balmy South, defeated by the fundamental coldness of Minnesotan culture.

“Fitzgerald was referring to the 1888 ice palace,” Bob Olsen, the unofficial Winter Carnival Ice Palace historian, explained to me. “It had a labyrinth in it, and people could go into it and up onto internal stairways.”

(Note that Fitzgerald was not born until 1896, so had taken some liberties with his palace timelines.) 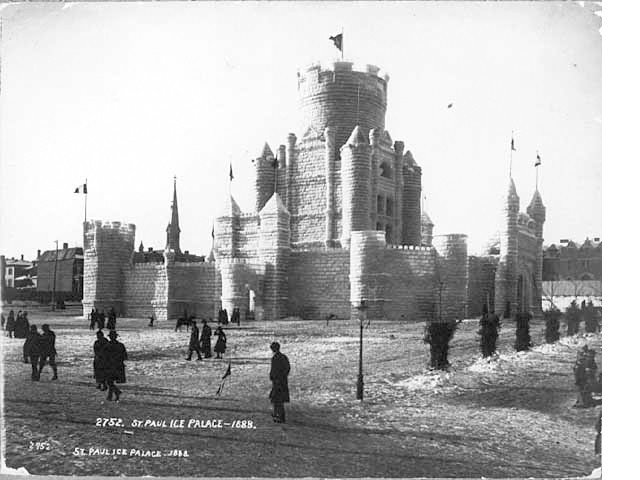 According to Olsen, the experience of actually entering an ice palace was a Carnival rarity. The majority of ice palaces were not actual physical buildings, but more like icy structures best viewed from a relative distance. One of the key reasons for the caution is that ice is a slippery structural medium, unlike bricks or concrete — what Olsen calls a “capricious material.”

“Ice is definitely a stone under 32 degrees,” Olsen explained. “But unlike most other rocks, as you load the blocks and stack it up, the compression stretches the ice. Rather than breaking the ice at the bottom, it tends to do a wedding cake-type squish. It’s called ‘creep,’ and it’s a very unique ice feature that needs to be considered in engineering.”

In addition to ice creep, an ice palace engineer’s other great concern is the weather. Not only do warm days cause problems with melting, but the sun can cause ice to decay internally, and wind can blow out the mortar between the ice blocks. All this makes for a great deal of mental and physical stress, and so many previously planned palaces were never built due to weather. A list of aborted palace attempts includes the never-built palaces of 1889, 1938, 1947, and others.

In the past, the unusual qualities of ice construction led Carnival architects to get creative about stability. For example, St. Paul’s African-American municipal architect, Clarence Wigington, designed four palaces during the ’40s, using design tricks involving lots of corners, to increase stability.

“[Wigington’s] undulating walls fit the zigzag modern he was working through stylistically at that point,” Olsen explained. “That was a direct ‘form follows function’ feature, a big façade where you build it up tall and give it strength.”

Likewise, according to Olsen, to construct the famous centennial 1986 ice palace by Lake Phalen, the builders employed a brilliant engineer, a Russian immigrant, who single-handedly calculated the structural properties of ice construction using military specifications.

Demolition of 1986 Ice Palace at the St. Paul Winter Carnival

The two other key features of Carnival palaces were that many of them served not as buildings, but primarily as walls. For example, the 1916 palace was little more than a large ice rink enclosure for a then-famous figure skating star. And the 1896 palace was primarily a massive wall enclosing a 600-foot toboggan run.

St. Paul’s ice palaces have also varied a great deal in size and mass. At the large end, you had the record-breaking (and Carnival bankrupting) 1992 ice palace of 20,000 massive ice blocks stacked 166 feet high, and the only slightly smaller 1986 palace. In many other years, the “palaces” were more like throne rooms. The 1949 ice palace consisted of just a couple hundred blocks that formed a stage in a vacant lot downtown, and the most recent attempt was the similarly diminutive Rice Park “ice wall” in 2011. 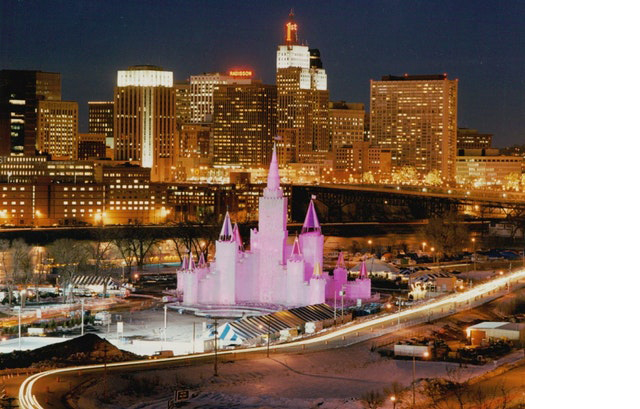 Despite all of its funding and climactic hurdles, the size and scope of this year’s ice palace falls squarely in the middle register of Carnival battlements.

“This palace is really a modern iconic interpretation of past palaces,” explained John Culligan, who designed this year’s palace for The Cuningham Group. “It is more of a modern reflection of a palace. It has the towers, the slotted windows, some corbeling like on the tops of palaces, but it’s done in a clean and modern way this time.”

Undeniably, with this year’s palace and the sprawling 2004 building, there’s been a turn toward ice modernism. Traditional details like corbels, merlons, tourelles, and parapets have tended to vanish in favor of clean lines and edges. No doubt this is due both to fashion and logistical constraints, but the last few palaces have been more gestural than structural.

According to Culligan, this year’s design centers on six towers arranged in an L-shape to frame a pair of ice thrones, for the Palace royalty. Following Carnival protocol, the towers will represent the king and queen along with the four princes of the various ordinal winds. 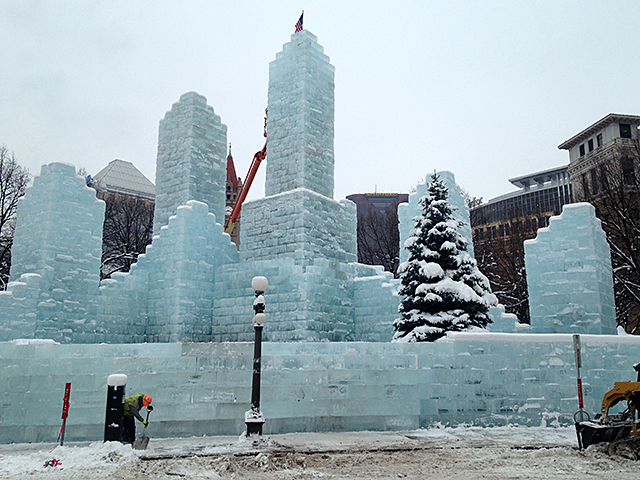 MinnPost photo by Bill Lindeke
With this year’s palace and the sprawling 2004 building, there’s been a turn toward ice modernism.

The other key facet of ice palace design revolves around lighting and transparency. It’s hardly a new phenomenon – after all, the 1886 ice palace was one of the first “buildings” in the city to receive electric lights – but most palaces have to walk a fine line between the opaque and the transparent.

“You have to take into consideration what it looks like in the daytime and at night,” explained Bob Olsen, who himself designed the 1975 palace. “The nighttime is the more interesting, with the lighting. In the daytime you have to figure out how to make a building interesting without shade and shadow.”

The need for dramatic nighttime palace lighting leads to many other facets of ice palace architecture, such as more transparent ice blocks, or the need for thin walls.

For people like me, people who still dream of losing themselves in a maze of icy walls, this year’s tower-centric construction might be disappointing. But given the increasing difficulties of ice construction in an age of climate change, this year’s palace looks wonderful.

“The people will be able to get within 10 to 15 feet of place, but general public won’t be allowed in the palace,” architect Culligan said.

“But enjoy it, because they don’t come around very often,” he added. “The ice always melts, but memories of ice palaces are frozen in time.”