Ye Old Mill was built at the Minnesota State Fair in 1915 by John H. Keenan of Oklahoma City, and for more than a century was operated by Keenans of one generation or the next (and the next and the next).

But this year, the third generation of Old Millers — John and Marna Keenan, who are in their 70s —  enjoyed their first truly relaxing summer ever, after the family sold the historic ride in January to the State Fair. Renovations and infrastructure improvements are complete and it’s ready to go for the 102nd time when the fair opens Thursday.

Summer’s end had always been the busiest time of the year for the Keenan family — scraping and painting, building boats and greasing gears, and filling the concrete moat with 60,000 gallons of water. After weeks or more of preparation in July and August, they’d always felt an air of excitement and relief when the gates finally opened and the crowds came rushing toward the gurgling waters inside freshly painted walls.

This summer, they relaxed.

And although no longer owners, the Keenans will still enjoy that first-day rush Thursday morning when they show up with children and grandchildren to take the first four-minute official ride on the newly non-Keenan Mill.

And then, after sampling the ride for the first time as customers (and, I’m betting, granting their official seal of approval in front of TV cameras on hand to mark the occasion), the Keenans plan to actually stroll around the fair. And enjoy it.

“We’ve never really ‘gone’ to the fair, so we’ll wander around, like regular folks, and see what’s there,” Marna Keenan said. They’re thinking maybe two leisurely trips this year, instead of the usual all-day, every day for the entire 12-day run.

“I didn’t wander far from our little area all those years,” John Keenan said. “My dad always said this was our business, so we had to stick around and keep an eye on it. The furthest I usually got was across the street to get a couple hot dogs, and then right back again. They were 10 cent hot dogs when I started.” 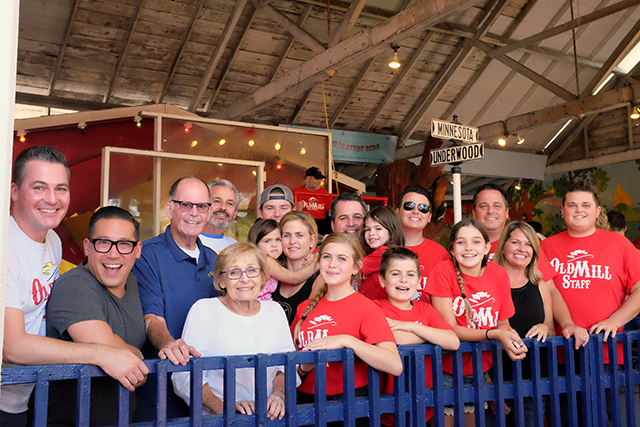 As the John Keenan family grew, with the boys and then grandchildren, they tended to cook and eat in the green space behind the mill, where the public doesn’t delve — in and around the covered channels. They also opened that space to many law enforcement officials at the fairgrounds. “We’d let them take their breaks, offer some cold water so they could cool off and get away from the crowds,” Marna Keenan said.

The decision to sell the family landmark after so many decades wasn’t hard, said John Keenan, who turned 76 this week. His grandfather from Oklahoma had built and run the Mill at the Minnesota fair (and operated other attractions, including a mill at the Iowa State Fair that was sold in 1972) until his death in 1935, when John’s father took over. John was 14 when he started coming north each summer to help his dad. And when his father grew ill, John took over for good and eventually moved his family to the Twin Cities in 1967. And when their own four sons were old enough, they began helping, too.

The boys were a great help to their parents over the years, but are now grown, and all but one live outside Minnesota. They returned home for at least parts of recent fairs to help, but that was becoming more difficult as their own families grew. And they couldn’t take the summer off for the prefair prep.

“So it really was time to sell,” John Keenan said.

And fair officials said they were delighted to buy out the Keenans and keep the mill operating as it had been for generations of Minnesotans.

Fair General Manager Jerry Hammer told the Star Tribune: “It’s such an important part of the fair. Everybody has a fair story about the Ye Old Mill. It’s still in the same spot and other than rerouting one of the canals a bit, it’s the same ride that your great-grandparents went on. That’s pretty cool.”

“Some of the updates have included: a new motor and boats, paint touchups, updated mechanics, updating of the vignettes on display through the tunnel and a new ticket booth. Ye Old Mill is a living connection to the fair’s past and will continue creating memories for future generations.”

John Keenan said there were always maintenance and repairs needed to keep the aging attraction in running order.

“When it was first built, the channels were lined with railroad ties and tar,” he said. “Over the years, my grandfather put in concrete walls. In my time, there were three times when concrete walls had to be replaced.” 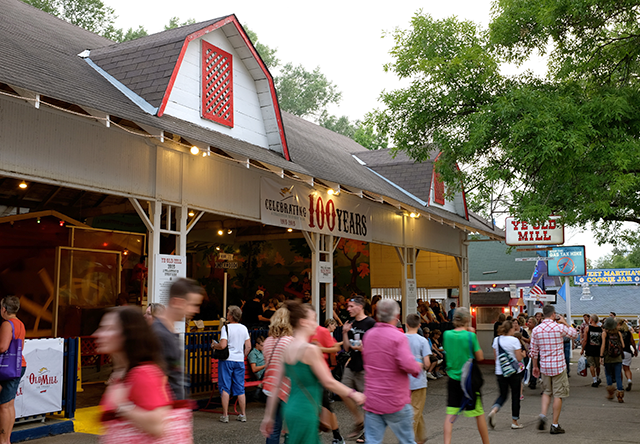 Minnesota State Fair archives
The decision to sell the family landmark after so many decades wasn’t hard, said John Keenan.

But John and Marna don’t have to worry about any of that this year. And they weren’t even at the fairgrounds at all this summer. No painting or pounding or patching.

So, what did they do this carefree summer?

“We had a lot of fun doing nothing. And only when we wanted to do it,” John Keenan said.

Marna Keenan said: “It was really a lot of nothing. And it was wonderful.”