There’s been so much fuss again this year about the new foods at the State Fair (see MinnPost’s review of the reviews) that it’s easy to forget — to paraphrase the classical music station motto — All State Fair Foods Were Once New.

Vendors at the fair heartily agree that having one of the heavily marketed new foods on the fair’s official list — released each summer two months before the fair starts —  provides a huge bump in sales, and many vie each year to come up with a new idea that will make the list.

Usually, though, they notice a fall-off the second year of a new food. And so they must decide: How long to stick with it?

Regular fair-goers will note that some of those vaunted new foods from previous years do have legs and stay on the menu and continue to be big favorites.

Others won’t. Sizzlers and fizzlers.

Dennis Larson, the fair’s food and beverage manager for the past 17 years, has seen many one-hit wonders. Ostrich meat on a stick is long gone, as are the thinly sliced pigs’ ears.

And he’s been surprised at some of those that have prevailed, despite his initial predictions — alligator meat has been here since 1997. And deep-fried candy bars opened 17 years ago and are still going strong. 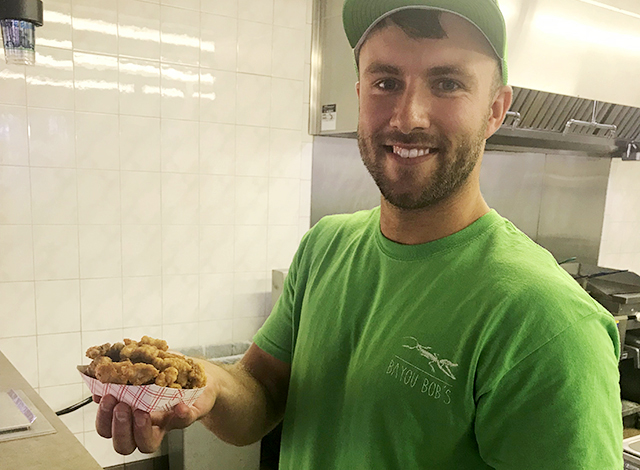 MinnPost photo by Joe Kimball
There was lots of buzz about the Deep-Fried Alligator when it came to the fair in 1997, though many thought it wouldn’t last. It has.

Even when sales of hot, new foods fall off, many vendors keep an oldie-but-goodie on the menu, thanks to “a small, but loyal audience,” Larson said.

We checked in this week with some of the fair vendors who’ve had big hits and kept on selling, or, in some cases, sent those recipes to the compost pile.

Risotto Poppers were on the list in 2012 when the French Meadow Bakery introduced the gluten-free item. And it’s still a perennial big seller, said Manager Kaitlyn Moreland.

“I think people would be mad if we took it off the menu,” she said.

Some of their new foods haven’t lasted as long, like the sausage gravy breakfast scone. But they’re always on the lookout for the next big thing and this year introduced Earth Wings, deep-fried cauliflower pieces. 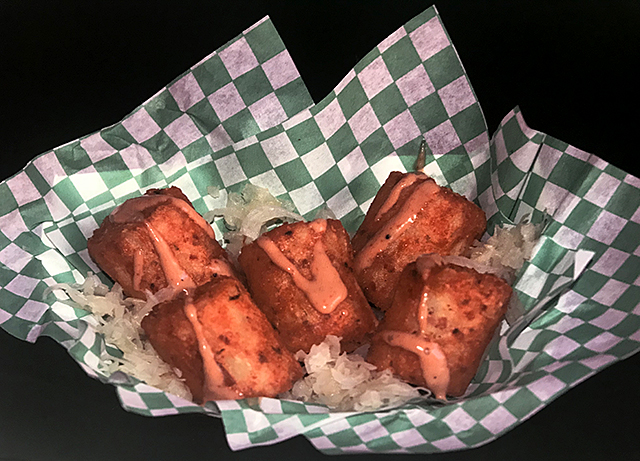 “We weeded out the green beans,” said owner Kris O’Gara. “We have to be creative every year to get publicity, because people want to try new things (which is amazing to me, because I like to eat what I know),” she said.

“The green beans were great the first year, but we only have room for so many deep fryers,” she said.

Alligator: Debuted in ’97, and still here

Deep-Fried Alligator came to the fair with some fanfare in 1997, and while the fair’s Dennis Larson had some doubts, booth owner Dallas Simonette was confident. “It’s obviously a quality product,” he said.

“I’d wanted to have a booth at the fair since I was 12 years old, growing up in New Prague,” Simonette said. “When I came up with this idea I knew it would be a fair tradition.” 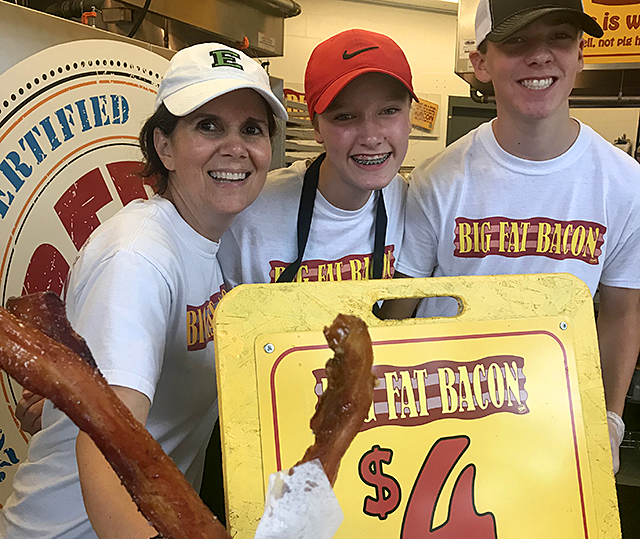 MinnPost photo by Joe Kimball
Manager Tina Jordan, here with some booth workers, said the price for Big Fat Bacon has only increased 50 cents over the years.

Big Fat Bacon started with much fanfare 11 years ago in a tiny shack across from the Star Tribune booth and now has its own building on Dan Patch Avenue. A quarter pound of bacon with maple glaze on a stick — of course it’s still around.

“We had a big first year, with all the publicity,’ said Manager Tina Jordan. “We knew bacon was going to be big, so we crossed our fingers and now we have a big group of regulars.” 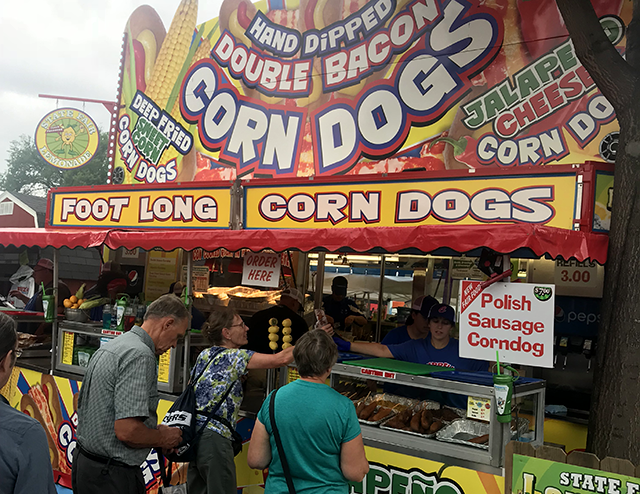 MinnPost photo by Joe Kimball
Eric Campbell introduced Double-Bacon Corn Dogs to the fair in 2013 as an alternative to the ubiquitous Pronto Pups/corn dogs.

Double-Bacon Corn Dog was introduced in 2013 at a stand run by Eric Campbell, who also has concessions at the Iowa State Fair. The variation of the omnipresent corn dog/pronto pup continues to have lots of loyal fans, he said. A jalapeno version, though, doesn’t sell as well here as it does in Iowa. “Must be that Scandinavian palate,” Dennis Larson said.

Pronto Pups favorites since the ’40s

The original Pronto Pups have been fair favorites since the 1940s, Larson said.

Corn Pizza and Corn Ice Cream both opened strong in past years for the Blue Moon Dine-In Theater, and are still on the menu. 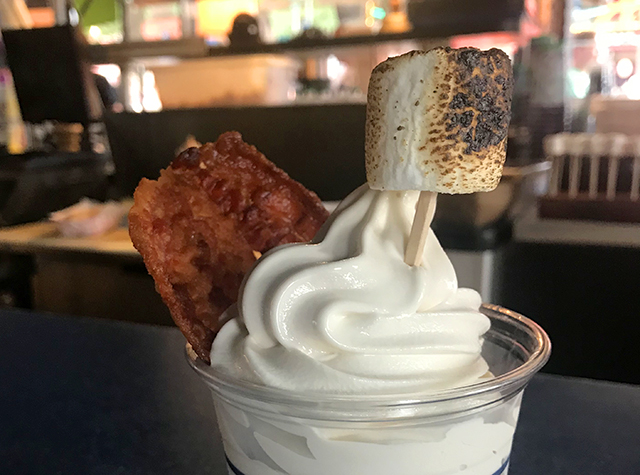 MinnPost photo by Joe Kimball
This year, Blue Moon is hoping for a winner with Smoked Soft Serve Ice Cream.

This year, the owners hope Smoked Soft Serve Ice Cream will continue the winning streak. But not all Blue Moon hot new foods continue to thrive. Chilled bread pudding was on the 2015 list, but has been dropped. Blue Moon is a regular on the new foods list and often has to pare some items to make way for the new, a booth worker said. “Less is more,” he said.

Fudge Puppies — Belgian waffles covered with chocolate — came to the fair in 1996 and, with the help of local and national media, generated lines out into the street, says owner Pat Braun. The original still has its “superfans,” she says. But she rotates other varieties onto the menu every couple of years, including turtle, strawberry, Reese’s. “We keep them for two years, then rotate them out,” she said. This year’s new model is cookies and cream. 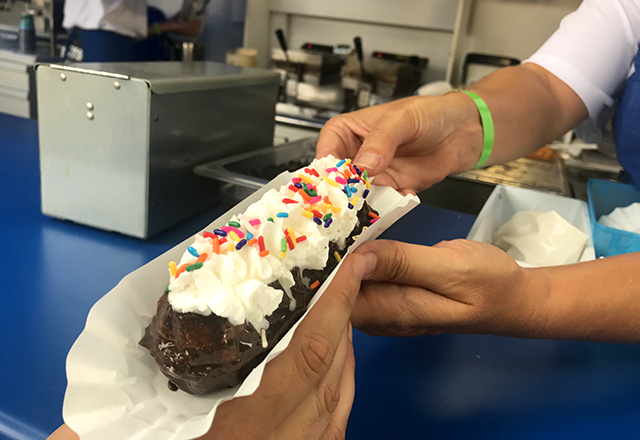 MinnPost photo by Joe Kimball
Pat Brown brought her Fudge Puppies to the fair in 1996 and had an instant success.

“The first year, the new ones do really great; the next year, it seems they all want to try the new one.”

As popular as ever: Deep-Fried Candy Bars

Deep-Fried Candy Bars on a stick may be the quintessential junk food of the fair. I remember when they came to our fair 17 years ago — after success in other states, particularly in the South — and I predicted they were too much of a parody and would be exiting the fair scene as quickly as the ill-fated Rocky Mountain Oysters and Camel-on-a-Stick. 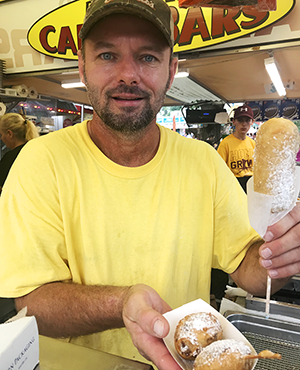 Donald Waddell, who spends the summer working in the booth as it travels the national fair circuit, said the Snickers, covered in battered and deep-fried, are as popular as ever.

And their Deep-Fried Oreos are becoming a new favorite. “Not as sweet,” he said.

The booth has tried, and dropped, other varieties over the years. S’mores, Nut Goodies and Moon Pies are no longer on the menu. And they don’t deep-fry cookie dough here in Minnesota, because they’re located directly across from Sweet Martha’s cookies.

That first year here, they weren’t prepared for the crowds, and didn’t bring enough supplies, Waddell said. “We were running around town buying candy.”

Next year, with the fair’s permission, they hope to introduce their next new variety: deep-fried pumpkin pie.

By the way, the fair’s Larson says that more and more, the new foods tend toward smaller portions; they’re more diverse and, possibly, healthier. Fewer deep-fried and on-a-stick items are showing up, as fair goers opt for smaller tastes of interesting new foods, he said.

State Fair sizzlers and fizzlers: What new food becomes a classic — and what doesn’t?