In all the marketing, press coverage, and local discussions, the Minnesota Orchestra’s and Minnesota Chorale’s excursion to South Africa has been called a “tour.” On the one hand, this is both logical and understandable — yes of course, the musicians are traveling to South Africa and performing concerts in South African cities.

But in watching this grand event unfold, it is clear that “tour” is completely inadequate to describe what is going on. What’s happening is a true and glorious exchange.

Ellen Dinwiddie Smith, who plays French horn with the Minnesota Orchestra, notes that “bad tours are truly terrible … those top-down, drive-by kind of things where we show up and perform our music at you, and you simply receive it. And when we’re done performing we go home, and everyone goes on with their lives. From the very beginning we were determined that this experience would be much deeper. The whole purpose of coming over here is rolling up our sleeves, digging in with the incredible South African musicians and to share music together. To learn what this music is, what it means, how its woven into lives here. I want to share my experiences, but I want to learn from them.”

That commitment has been tightly woven into every aspect of this exchange. Rather than just performing in concert halls, the musicians are getting out into the community. Over 12 days in South Africa, the musicians of the Minnesota Orchestra and Minnesota Chorale will work with 750-800 local musicians and 20 music ensembles. At least 11 South African composers will have their works performed. Together, these engagement opportunities will reach across an entire generation of South Africans.

One of the South Africans whose life has been changed by this exchange is Ethan Adams.

In fact, Ethan is getting a double helping of exchanges. As an instrumentalist, he joined with members of the Minnesota Orchestra at the Cape Music Institute. Plus, as a singer in the group 29:11, he will be joining the Minnesota Chorale and Gauteng Choristers onstage singing Beethoven’s Ninth Symphony in Soweto and Johannesburg.

He goes on to explain: “I loved tech, and went to university for IT. I always assumed that would be where I ended up, and music would just fade into the background. I never thought of myself as a musician or having a place in music … that was for others more talented than me. But this has shown me that I do have a place. I have a voice. They showed me that music isn’t something just out there, but for me. And there are all kinds of ways I could make a living in music, if I choose. … I could be a studio musician, work as a freelancer, or with a church or other institution. Or I can work at any of a variety of connected roles, in production, recording, and more. They gave me tips, they gave me networks, and a place at the table. I still love tech, but music has to be part of my life now — not just as recreation, but as a profession.”

Ethan’s story is not unique — this same story has played out in many ways, in many moments along the way. I noted how hungry the students were for interaction with the musicians, asking questions about performances but also about what life was like as a player in a professional orchestra … and what they needed to do to reach that level. Cellist Marcia Peck said, “We’ve been blown away by the caliber of the students we’ve worked with, but also their professionalism. The musicians are getting bombarded with questions about our lives. It’s not just about improving their playing but moving forward in their careers. And we’re hear to break down the mystery. To show them that they deserve to be on that stage, and help their dreams to get there.”

The Minnesota Chorale has experienced those exact same questions in our own engagement opportunities. A planned master class with the University of Pretoria (TUKS) Camerata led to the Chorale performing as a surprise guest at the UP Music Festival. After the festival performance, one of the Camerata singers approached Jerry Rubino, a noted music director, arranger, and pianist who sings with the Chorale. Rubino had just finished conducting the Chorale from the keyboard in his own arrangement of “It’s a Grand Night for Singing.” As Rubino described, “This student rushed forward before we exited the stage. He gushed about the performance, and peppered me with questions about playing piano. We ended up having a fascinating conversation about music, and how much it means in our lives. Curiously, he was studying medicine — not a music student at all — which is what made the conversation so rich. He’s looking for ways to keep engaging in music through all parts of his life, after graduation.” 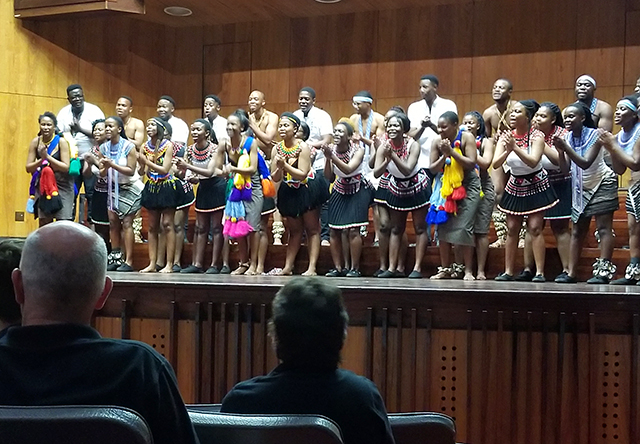 MinnPost photo by Scott Chamberlain
As part of the cultural exchange with the University of Pretoria, the UP Ovuwa Cultural Ensemble and Minnesota Chorale performed for each other.

The best part of an exchange is that it engages both sides. And that has certainly been happening here in South Africa, as the Minnesotan musicians end up being just as enriched as those of their counterparts. As Minnesota Orchestra trumpet player Chuck Lazarus remarked, “These musicians are showing up with their A-game. Again and again we’ve been blown away at their musical level … not just technically, but in the passion and utter commitment they bring to their playing. They are giving it their all, which makes us dig deeper to keep up with them. We’ve all been saying they are forcing us to up our game, and that’s when truly incredible music gets made.”

Minnesota Chorale singer Debbie Richman shared similar sentiments about working with the Gauteng Choristers. “Their sound production is so rich, so grounded, so powerful that it’s overwhelming. From that first chord together, the sound they brought was completely intimidating, if not terrifying. But it’s not just a trick of the voice or some strange technique … there is this incredible musical wisdom that draws from deep, deep places. We can never replicate this tone ourselves, but only hope to blend our voices into their sound and become part of it. And when we do, our joint performances are going to be beyond anything our audiences back home can imagine.”

It is perhaps best to give the final word to Ethan about the impact this exchange has had: “I’m so grateful — delighted and grateful — that these incredible musicians would reach out to us as equals, as one musician to another. They didn’t just give us praise and go on, they gave us criticism — the best kind of criticism. They gave honest advice and suggestions, but it was clear that they were really listening to us and wanted us to reach farther than we knew we could. They respected us for that. And I’m so grateful they did.”