“Sports, sports, sports!” chanted the big TV-watching crowd at the Black Hart of St. Paul Saturday night, after Minnesota United FC scored it’s first goal of the night against San Jose in California. As the chant rose, David Zeller hoisted his 7-week-old son in the air, and repeated the ritual when MU scored again to appreciative jigs and whoops all around, in as jubilant and hilarious a pub scene as they come.

Open since August, the Black Hart bills itself on Twitter as “queer soccer bar in Midway neighborhood of St. Paul,” in homage to the spot’s former occupant at 1415 University, the Town House bar,  and in cahoots with the current soccermania gripping the fast-reinventing Midway.

“Obviously it seems extremely niche, but there’s a lot of gay, lesbian, and trans fans, so there’s years of big overlap,” said Black Hart owner/manager Wes Burdine. “Soccer fans are largely very progressive and open and a lot of times for the straight community — you know, I’m a straight cis man — there’s kind of this need to feel like we’re not invading a space like, it’s a gay bar. It’s their bar. So the idea is to have a place where it’s for everyone, but it’s extremely important to maintain a safe place for particularly the trans community at the bar.”

Saturday night was a busy bar hopping night on University Avenue in the Midway, as down the street from the Black Hart, alt-roots-rock fans packed the Turf Club for a sold-out Flesh Eaters show, and the “official watch party” for the Minnesota United FC-San Jose game packed out the Dubliner Pub. At the Black Hart, MU fans celebrated the 3-0 win over the Earthquakes with their traditional game-ending singalong of Oasis’  “Wonderwall,” and goofy St. Paul Saints fans-worthy cheers of “Here we go, here we go,” “We’re on top of the table” (sung to the tune of Twisted Sister‘s “We’re Not Gonna Take It”), and spontaneous all-in cries of, “Paul your pizza’s ready at the bar, Paul your pizza’s ready at the bar,” and “We should have a podcast! We should have two podcasts!”

The passion — and fun — for all things Minnesota United FC, soccer, and LGBTQ was off the charts all Saturday night. MinnPost took in the game, in words and photos:

Maria Delondro, Sarah Waterworth, Scott Armendariz, Brett Frayseth, Jeremy Steil: “We’re on the board of TC Jack’s, the LGBTQ soccer club,” said Frayseth. “We’re 13 years old. Currently our only out player, Colin Martin, plays for Minnesota United, so that definitely … because Minnesota has been so supportive of the LGBTQ community, it really meant a lot when Colin Martin came out last year.

As an LGBTQ soccer club, we’ve found a lot of acceptance in Minnesota.”

“I think soccer is your most integrated sport,” said Waterworth. “It’s something everybody — rich, poor, black, white, male, female — can get into. And this bar is super approachable. It’s very easy to get here by public transit, it’s right across from the stadium (Allianz Field),  and the drinks are cheap.”

“The mission of our organization is really to create a safe place on the field for LGBT players to play, so we field teams locally and internationally and nationally,” said Steil. “So this is just a great add-on to have a safe space off the field, to come and congregate with soccer fans — gay, straight, and allied.”

Maggie Heyer: “I love the atmosphere here. I’m a member of the LGBT community, and I love having a bar that has soccer, which is my huge love, and I feel welcome. Soccer is the world’s game and we make an effort, especially in Minnesota with our supporter groups, to be inclusive to everyone. We are just really open and welcoming and everyone can bring themselves to our section and cheer for our team in one voice. I’m the match day lead for Dark Clouds, which is our big supporters group. I get up in front of everybody and get everybody going, and it doesn’t matter that I’m female and that I’m queer; they like me anyway. And nothing gives me goose bumps like 20,000 people singing ‘Wonderwall.’”

Wes Burdine, owner/manager: “I purchased the [former Town House] from Holly Monnett. We took over August 31st, and rebranded it the Black Hart. A couple years ago, I set out to figure out a place that we could put together a soccer Midway bar. As I approached the different bars, it was clear Town House was the best option, and I initially was really nervous because Town House is an institution and I didn’t want that to go away. Soon we realized we could add soccer into what already existed, and keep doing what Town House was doing, like the drag shows.

“Last week was the first game, and it was packed to the gills. It was so wonderful to watch, and people were excited — for the stadium and the new season, but also just having a place where soccer is … you don’t have to feel bad about asking to have the soccer game be put on [the TV], and where we can kind of develop a soccer culture. Tonight we will pivot from the soccer [crowd], which is a lot of straight dudes, to a drag show at 10.

Burdine (in make-up chair): “We have [the drag show] Sparkle tonight, and it’s my birthday tomorrow, so I decided I’d perform in drag tonight, which I’ve never done before. The name I’m going under is Tucker Bone, which is actually the name of a soccer player who was drafted this year by Seattle, and I thought, “That’s the perfect drag name.”

David Zeller and Ragnar Zellburg: “I’ve been a Dark Cloud for six or seven years. I live in the neighborhood. He was born seven weeks ago, and he’s been here more times than my wife has been here, because we live so close. It’s not just a soccer bar, it’s not just a LGBTQ bar, it’s a community bar, it’s a neighborhood bar. So I can come in here on a Wednesday afternoon to watch some soccer and give my wife some sleep for a couple hours, and me and him can come hang out for a little while.”

David Zeller hoists his seven-week old son Ragnar to the Black Hart rafters after Minnesota United scored its first goal of the game.

Jack Cushing and Anna Charles (far back, against the wall): “We’re season ticket holders, we actually just bought a house in the neighborhood to be close to the stadium, primarily, and this will be our home for the away games,” said Cushing. “I think it’s great that they’ve honored what the bar was before while still bringing this new thing in to kind of maybe reflect where the neighborhood’s going, so it’s exciting, and the train’s right here.”

“We’re super fans,” said Charles. “We’re loving seeing the turnover of the Midway neighborhood, and the continued outreach towards different parts of the community and the focus on inclusion. We moved from downtown Minneapolis and we live just a half-mile from here. We love it.”

Fallon Moore: “I’m with the Dark Clouds, the main supporters group for Minnesota United. The Black Hart is just a natural choice. What Wes has done with this bar in such a short amount of time really speaks to how excited and ready we are to have a permanent home and set up shop in the Midway neighborhood. Wes actually just went around and counted, and there’s 93 people here in a blizzard. It was probably triple that last weekend for the season opener. It’s electric. You come in and you feel like you’re part of something, and that something doesn’t care who you are, and that’s powerful.”

Bruce McGuire: “I didn’t think I’d ever come to this neighborhood to watch soccer. I’ve been here half a dozen times; we know the owner, Wes, and that first night was a blast because how often do your friends take over an establishment?” 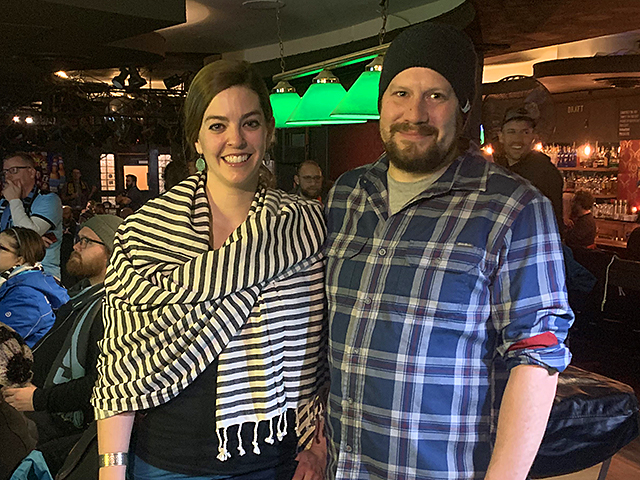 Amber Glawe and Tim Martin: “He plays soccer; this is my first time here,” said Glawe. “Walking in here and seeing rainbow stuff on the wall and a drag queen poster on the wall, it’s exciting. I live pretty close by, I’m not into sports, but I do like going to gay bars. They’re just inclusive spaces, and they’re more fun. I don’t feel like I’m getting hit on by random guys, it’s more of a community vibe, and that appeals. The bar is doing some good work to get Midway residents to come here, discount deals for people who live in the surrounding area. I like it.”

Betty Bang (left) and Allota Shots prepared for the post-soccer game drag show. “I’ve been performing at this bar for three years, and we’ve had nothing but positivity in my entire experience. It’s only gotten more positive with the inclusion of the soccer bar and reinventing of everything, and I’m excited to see where it takes us,” said Bang. “The bar has such a rich history in St. Paul and it’s so cool that it’s been able to get a revamp and provide more of an inclusive area for so many people in our community. Tonight is going to be a hootenanny!”

Dina Delicious: “This bar feels like a home outside of my own home. It’s very comfortable to come out here. It’s a very welcoming community. Tonight I’ll be doing an Ariana Grande mix. I’m known for doing a lot of her music and I impersonate her a lot. Her ‘Break Free’ is a song that I like to do because it describes who you are as a person, and it’s about breaking free into the person that you are, and feeling comfortable with yourself.”