The following is excerpted from the new book “Secondhand: Travels in the New Global Garage Sale,” by journalist Adam Minter, the son of a Minneapolis scrap dealer and the author of “Junkyard Planet.” Bloomsbury Publishing describes “Secondhand” as “an unexpected adventure into the often-hidden, multibillion-dollar industry of reuse: from thrift stores in the American Southwest to vintage shops in Tokyo, flea markets in Southeast Asia to used-goods enterprises in Ghana, and more.” Minter will be in town for a Citizen’s League Policy on Tap event on Dec. 2 and in Northfield for an event at Content Bookstore on Dec. 5.

Highway 169 runs north-south through the affluent western suburbs of Minneapolis. High brown walls that serve as sound barriers block views of most of the neighborhoods, but here and there a mini-storage business appears along the way. Beige seems to be the preferred color, and during the dry Minnesota fall, when the highway scrub turns tan, they’re all but camouflaged.

Everyone knows they’re available and the purpose for which they’re erected. To meet the ever-growing demand from Americans for space to store their stuff, hundreds, sometimes thousands, are erected across the United States every year. As of 2017, there were at least fifty-four thousand mini-storage sites in the United States, with enough rentable space to cover all of Palm Springs, California, golf courses included. In recent years, the industry’s annual profits are triple those of Hollywood.

Those profits won’t be threatened for many years. At a time when personal identity is wrapped up in brands, Americans are prone to keep things longer, and sometimes value them more than they value themselves. At Ace Mini Storage [recently rebranded as a Storage Mart], located along Highway 169 in Plymouth, the cost for a square foot of unheated storage space exceeds the cost per square foot of many studio apartments in the surrounding area.

On a brisk fall day I stop into the Ace Mini Storage office to ask about price and availability. The balding clerk picks up a piece of paper with a grid printed across it and squints. Outside, a pickup pulls into the parking lot with furniture piled into the bed; a lamp hangs off the side. “We might have something available later in the week,” the clerk declares and pushes a business card across the desk. “A ten-by-forty unit.” 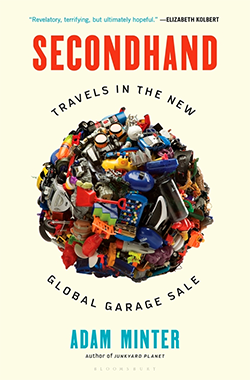 It turns out that particular unit is the reason Sharon Kadet is now pulling up in her car. She’s the account manager of Empty the Nest, an eight-year-old local business that empties homes of their property.

The reasons for these cleanouts vary, but they typically revolve around downsizing and death. Business is booming: by 2030 senior citizens will account for one fifth of the U.S. population. Some of those seniors want to remain in their large single-family homes packed with stuff. But many others downsize, either by their own or someone else’s choice. And some will pass on, leaving the heavy responsibility of cleaning out a life’s accumulations to somebody else.

Plenty of companies and individuals will clean out homes and drive the stuff to the dump after skimming the easily marketable objects. But Empty the Nest is unique in its commitment to finding reuse and resale markets before giving up on an object. Empty the Nest has a thrift store, and what can’t be sold there is donated to organizations that might have better luck.

As Sharon steps out of her car, a cold breeze whips past, ruffling her black windbreaker and shoulder-length hair. “The deal is that we’re cleaning out two units for this man whose mother filled it up with all kinds of collectibles,” she tells me as we walk toward a large truck parked at one end of the facility. “It’s pretty incredible how much she left. I think she might’ve had a store.”

Sharon, with hundreds of cleanouts in her background, has watched the difficulty that clients have in letting go. “Yesterday we cleaned out a place, and later the sister called and said he [the client] died at four a.m.” She throws up her hands. “I don’t know . . . but coincidence?”

Historically, personal identity revolved around religion, civic participation, and pride of (oftentimes small) place. But as those traditional bonds disintegrate in the face of industrialization, urbanization, and secularization, brands and objects become a means to curate and project who we are. Users of iPhones “think different” than users of Android-enabled phones do. A Volvo station wagon, a brand and model favored by liberal residents of academic communities, isn’t likely to be found in the drive-through at Chick-fil-A, a fast-food chain favored by conservatives. Small acts of consumption add up to a picture of who we are—just ask Google or Facebook, companies that keenly track consumer identities online. And for many Americans, objects packed into a home present the complete curated package.

I wander up the stairs and into a first-floor bedroom off the living room [in a home in north Minneapolis]. Inside, Kristy Dueffert, a four-year packing veteran, is sorting through clothes. Three vacuum cleaners are perched in a corner.

“People hold on to a lot of stuff. If they have one piece of paper,” she tells me, “they have a thousand.” She’s younger—and breezier—than her colleagues. “I have two kids, and I used to keep a lot more stuff,” she explains. “Then they grew up, and I realized it didn’t mean as much to them.” She folds undershirts into a bag for the Salvation Army. “You should take a look in the attic.”

It’s reached via a set of stairs that ends at a tight landing further constrained by the angle of the roof. The overly warm space is cramped, and made more so by the wild assortment of stuff that’s spread across the floor, a bed, tables, and a dresser. I open a large black garbage bag and find a sparkly paper Santa Claus staring back; beneath him, ornaments. I close the bag and scan the piles. There’s another vacuum cleaner in a corner.

Downstairs, I mention the Christmas stuff to Kristy. “It’s still summer, nobody wants it,” she tells me. “If you try to donate it to the Salvation Army, they’ll say no. Nowhere to store it.” She shrugs. “Things accumulate. Working with Empty the Nest, you learn ‘you bring something in, you take something out.’ ”

Prior to World War II, little that Kristy just said would’ve made sense. The United States, like the rest of the world, was still an agrarian society, families were large and localized, and property of any kind was scarce, oftentimes homemade, and valuable. Nineteenth- and early twentieth-century practical housekeeping manuals (a genre that’s largely disappeared) were, in many respects, repair manuals. Some included basic cement recipes to aid in the repair of broken dishes. Others offered advice on basic strategies to prolong the usable lifespan of pottery, ironware, and glass. What little a parent or grandparent owned and left behind was bequeathed to the next generation for uninterrupted use.

As the industrial revolution drew families into cities and mass-production jobs, society’s relationship to stuff began to change, and modern notions of “waste” emerged. For example, in traditional farming communities, food scraps are fertilizer. But the nineteenth-century urban tenements into which rural families relocated provided little space or opportunity to “recycle” food. In the absence of waste collection, food scraps often literally went out of the window, into the streets. In 1842 the New York Daily News estimated that ten thousand pigs were roaming the streets of New York, consuming mostly organic garbage. Modern trash collection and disposal had yet to be invented.

Likewise, before mass production rendered clothing cheap and large wardrobes a middle-class entitlement, garments were homemade and expensive. A shirt could require days of labor; bed linens and blankets were heirlooms. When they wore out or tore, they were mended, reused in other garments, or—ultimately—reduced to rags for cleaning.

Industrialization and urbanization changed everything. Busy days spent in a sweatshop provided little time to mend a shirt, repurpose it into a new garment, or reduce it to rags. As a result, store-bought alternatives emerged, and families used the money earned from hourly or daily wages to buy them. They were still expensive—it would be decades before middle-class Americans could afford multiple changes of store-bought clothes. But the idea that a garment or other object was a resource that should be renewed at home was eroding. In the process, the sentimental value associated with clothing declined as quickly as the material value. After all, it’s easier to discard a store-bought shirt than one made at home by a mother, a wife, or a sister.

Of course, a preindustrial agrarian lifestyle is more environmentally sustainable than a modern one. But so too is the brutish nomadic life that preceded the development of agriculture. Nobody is clamoring for either, and it bears repeating that neither is worth romanticizing: sanitation and nutrition were poorer, and the average lifespan was considerably shorter and less interesting. No doubt, there are downsides to an economy built on mass production and consumption. Factory production, in particular, can take a significant toll on air and water quality. But even in places where that toll is most tangible, such as contemporary China, consumers understandably embrace mass production and urbanization over the alternatives.

That’s worth celebrating. But spend a few hours at an average American home cleanout, and there will be moments when you doubt that you’re celebrating the upward arrow of human progress.

These “Secondhand” excerpts are republished with the permission of Bloomsbury Publishing.

Inside the multibillion-dollar reuse industry: What happens to all your discarded stuff?