This weekend, Minnesota anglers will be packing tackle, towing boats and heading up highways 35 and 169 toward the state’s premiere fishing lakes for the walleye opener.

As they pile into fishing boats and push off for this rite of spring, some of them will likely be singing the opening bars to the same song, “Walleye,” which starts,  “Trollin’, trollin’, trollin’.”

The song is a parody of “Rawhide,” the theme song for the television western of the same name. But instead of being about a cattle drive, the lyrics of “Walleye” tell of trying to land Minnesota’s elusive and feisty state fish.

The song was released in 1986 in the Twin Cities by the Hula-Poppers, a one-hit, two-performance band named after a fishing lure.

“The song was so popular that every juke box in every bar in the Midwest had a vinyl 45 set up for play,” Tim Lesmeister wrote in Outdoor News last year. “You could rarely get through a burger and fries without hearing it a couple of times no matter what time of year. It is a song that gets a laugh every time it’s played and one you never tire of hearing.”

Today, issues with the rights to the original song mean you won’t find “Walleye” on Spotify or Apple Music (although someone has uploaded it to YouTube). But reminiscences about the song are all over internet fishing forums — and it still gets occasional radio play, plus the a capella treatment in fishing boats, this time of year.

‘We had a lot of laughs’

“Walleye” came out of conversations around the campfire between Charlie Campbell and friends.

“We just plugged in the lyrics and kind of fooled around with it for quite a while,” Campbell said. Ultimately, Campbell thought it was too funny not to record.

Rich Lewis, a Twin Cities musician and the owner of Lewis Pipe and Tobacco, in downtown Minneapolis, remembers getting a call from Campbell asking him to come in and sing the song.

“Why me? For some reason — I don’t know,” he said. He remembers the recording session: On one side of the studio, a metal band was rehearsing. “[They] had a drummer that sat in one of these rings and it spun upside down,” Lewis said.

On the other side, separated by glass, it was a different vibe: Charlie, Larry Hayes, who had been in the Lamont Cranston Band and helped write the “Walleye” lyrics, Rich and a few others, with their instruments — plus fishing rods they used to make casting sounds on the recording.

“We had a lot of laughs. And there was a fair amount of beer consumed there,” Campbell said.

‘We don’t know any other songs’

Campbell had vinyl 45s of “Walleye” made. On the B-side of the disc was a song by Lewis’ band, the Sweaterz. Campbell gave maybe a couple hundred copies of the 45 to a record promoter he knew, who passed them out to radio stations, just in time for fishing opener.

Before the Hula-Poppers knew it, radio stations, including WCCO, had picked up the song and started playing it for fishing opener. “Then, of course, all the other radio stations started playing it. And then the jukebox people started going well, people are asking for this up at the lakeside tavern,” Campbell said. Soon, many jukeboxes had copies, too.

Dr. Demento, the nationally-syndicated novelty radio DJ who helped to launch the career of “Weird Al” Yankovic, started playing “Walleye” in 1987. The show is now streamed online and continues to play the song.

The Hula-Poppers weren’t exactly a band, in the sense that they were just a group of guys who recorded a funny song together. But they did play live, twice.

Lewis recalls getting a call from Campbell shortly after “Walleye” came out about playing First Avenue — decked out in fishing gear — during a radio programming convention.

“I’m like, ‘Are we just going to do one song? We don’t know any other songs,’” Lewis said. “So we learned, ‘Saturday Night Fish Fry,’ I think. It was by Louis Jordan.”

The band also performed once at the Cabooze, where Campbell worked doing talent buying and promotion. 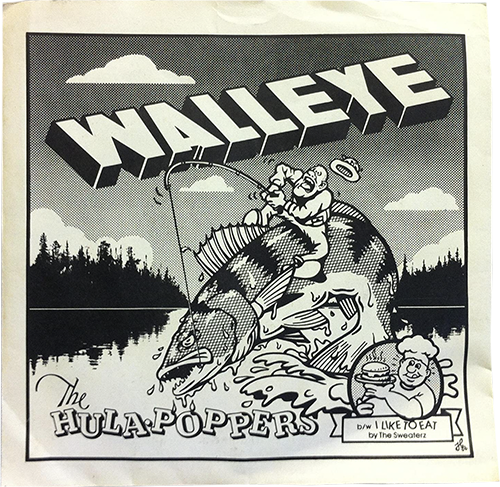 Ultimately, that’s about as far as the Hula-Poppers went with things. As he was about to get records pressed, Campbell said he tried to get permission from the publishing company that owned “Rawhide.”

“We got a lawyer and we wrote a letter. We didn’t think anything of it,” he said, figuring the publishing company might like to have whatever extra income the song brought in. By the time they got a letter back saying they were rejected, “the cows were out of the barn,” Campbell said.

Instead of facing a potential legal issues, Campbell said they pulled back on “Walleye,” and hoped to let the whole thing simmer out on its own.

“The fact that we really didn’t follow the rules in the beginning and get the permission and all of that other stuff prevented us from really turning it into some sort of you know, financial windfall, but in a way that’s kind of kind of been the charm of this over the years,” Campbell said. “It’s never been sold out.”

Still, Campbell said over the years people have approached him to ask to use the song; once on a fishing show, and a couple decades ago, to potentially manufacture a Big Mouth Billy Bass-esque walleye that sang it.

But the issue of the rights to the song remains an obstacle for any potential distribution of “Walleye” (Campbell said technical and manufacturing issues stymied the singing walleye, but the rights could have been an issue down the line). Still, Campbell said he would still love to see something worked out with the publishers of “Rawhide” so that “Walleye” could be distributed.

While ambitions to capitalize on the song have mostly quieted down, the song hasn’t — not entirely. Russell Nelson, of Twin Cities Walleyes Unlimited said he’s still singing it in the boat to this day.

“The preparation and getting ready for fishing opener — you tend to get a little energized and jazzed up and then that song comes up,” Nelson said. “Everyone’s singing it, even in the boat, you’re trolling along singing it. Catch a walleye, now you’re really singing it.”

And while “Walleye” isn’t as popular as it once was, the earworm is still in the catalogs of some Minnesota radio stations. Once in a while, it still gets played — particularly around fishing opener.

Lewis said he thinks the song’s popularity speaks to its distillation of the fishing experience, with lyrics about freezing fingers and the thrill of waiting for a bite, “six pack, lures and leeches by our side.”

“It really talks to the basics of when guys go up for fishing opener and drink ’em up and tell big stories,” Lewis said.

These days, Lewis, who plays in the Rich Lewis Band, doesn’t exactly promote the song, but it still comes up sometimes. He half-joked that it could be on the setlist for his band’s Lake Harriet gig in August.

“I was just talking to my drummer today about it,” he said. “And he said, ‘we should learn that and, and play it.’ So maybe we’ll do that at Lake Harriet.’”

The story behind ‘Walleye,’ the Minnesota fishing opener hit tune