“Growing up, I was a big Minnesota sports fan, so for me it was always Kevin Garnett and Randy Moss as a kid, but I got curious, wondering why there wasn’t anybody on the TV screen who looks like me,” said Wenell, sitting in a St. Paul coffee shop earlier this month. “So when I got curious, I started doing some research in my school library and they happen to have some information on the computers and some books, and I found out about this Sac and Fox Nation athlete named Jim Thorpe. He’s also Potawatomi. That’s when I dug in and kind of got to know who he was a little bit.”

Wenell, now 35 and going by his hip-hop moniker Tall Paul, knows his hero’s tale well and can recite Thorpe’s accomplishments and bio off the top of his head, from standing up for Native representation in film as well as Native athletes as the first president of the early National Football League; the first coach/player of the only all-Native football team, the Oorang Indians, and more: “He was a 1912 Olympic gold medalist; ballroom dance champion, pretty random; he played basketball, played Major League Baseball. He was a very talented, gifted, amazing athlete.”

Thorpe dominated the 1912 Olympics, winning gold medals in the decathlon and pentathlon, which were initially stripped due to the fact that he’d been paid for playing minor league baseball, and only reinstated recently.

“He was the GOAT (greatest of all time), but his footage from the 1912 Olympics mysteriously disappeared from the Olympic archives. Also afterwards, they stripped him of his gold medals based on amateurism stipulation [rules] that he supposedly broke,” said Tall Paul.

“I mean, he wasn’t even technically an American citizen, which is crazy to think, you know, being one of the first Americans being a Native American and not being an American citizen is kind of crazy. But he wasn’t aware of all the hierarchical rules and all that kind of stuff, the bureaucracy of sports.

“After they took his gold medals, of course, they went as far as removing him from the record books in the 1960s and ‘70s. His family and some other people got him back in the record books, though, just recently, and he was reestablished as the sole gold medalist of the 1912 Olympics decathlon and pentathlon. So basically, there’s still parallels from his time to this time, with the racism, the experience of being stripped of his gold medals disingenuously, they just wanted to tear him down.

“So just learning about all that inspired me as a young Native athlete myself. … You know, there’s just so much you could say about him.”

And so Tall Paul has, with his new recording “The Story of Jim Thorpe,” released digitally Nov. 18 and lit by the first single and Thorpe-homage video, “Someone Great Who Looked Like Me.”

As a young kid playing football, discovering Thorpe was “a matter of representation,” Tall Paul said.

“There definitely is that ancestral energy that’s so strong, even though he’s not my literal ancestor, but like in Native ways, he’s like somebody who inspires you. You consider them family. We derive power from our ancestors, especially in the Native community; we see power in our ancestors. Everything that they went through to get us to this point where we’re at now, to the point where we have our own TV shows and movies and some Native politicians like [United States Secretary of the Interior] Deb Haaland, our ancestors made that possible.”

Born in Oklahoma, Thorpe’s athletic career began in earnest with the Carlisle Indians college football team. (A forthcoming biopic, “Thorpe” will focus on the Carlisle chapter of his career.)

Founded in 1879 in Carlisle, Pennsylvania, by an American cavalry officer, the Carlisle Indian Industrial School was created to force the assimilation of Native people into white Christian society. During Thorpe’s time there, Carlisle was a college football powerhouse. What does he represent to a Native athlete and rapper in 2022 Minnesota?

“Just that Indigenous Excellence, you know?” said Tall Paul. “He didn’t stand down to nobody, he wasn’t afraid, he went and did his thing. He felt like he was the best and he proved he was the best in his time. He was sports’ first superstar. He was like today’s LeBron James. 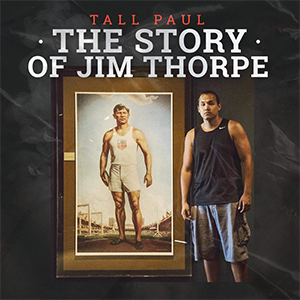 “So when I saw that as a young kid, I’m like, ‘Alright, you know, I’m not less capable as a Native youth or anything like that.’ Because there’s so much in the media, where we only see ourselves portrayed as Indians in cowboys and Indians movies, and when you only see yourself on the TV screen dying all the time to cowboys, it gives you this inferiority complex in a way that’s subconscious, especially as a kid when we’re impressionable, and that’s what happened for me.”

Thorpe remains forever in the American zeitgeist and at the moment, with America undergoing a new reckoning for its colonial past, his success-in-the-face-of-blatant-discrimination story is a history lesson always worth revisiting. Or rapping along to.

“I was inspired to make this record now just because of everything he did for me as a kid and just as a person and Native men in general,” said Tall Paul of the 10-track release that also features Twin Cities hip-hop talents Gunner Jules, Tanaya Winder, Twin City Tone, Darren Sipity and Sten Joddi. “The motivation and inspiration I drew from his story, and I felt like I owe his legacy to tell his story. I think now is as good a time as any. I’ve been working off and on this record for a few years now, and it just felt like it’s time to finally get it out there.

“I just see all the representation happening right now and I kind of wanted to coincide with that, too. Like with TV shows like ‘Reservation Dogs,’ Natives are getting a lot more spotlight now and I want to kind of fit his story in with that, with hip-hop.”

“The Story of Jim Thorpe” can also be heard as an extension of Tall Paul’s ongoing work to elevate his Native Ojibwe language, which he studied and taught at the University of Minnesota, and culminated with his track, “Prayers In A Song,” a bilingual Ojibwe-English song “aimed at helping my tribe’s language revitalization efforts,” Tall Paul said.

Along with his music career, Tall Paul is a father and five-day-a-week gym rat, and he recently joined the board of the Mni Sota Fund Community Development Financial Institution (CDFI), a Native CDFI that’s working towards financial literacy and investment knowledge for the Native community. At the heart of it all for him is Thorpe, a legendary figure who reminds all concerned that the past is not the past and who resonates anew in this truth-telling present.

In the end, what stands out most about Thorpe for Tall Paul is not the athlete, but the man.

“Beyond all the accolades, people don’t know as much about his childhood and his personal story. He was a kid living in boarding school, where Native kids were basically taken from their families and put in boarding schools to be so-called assimilated, civilized, and then his brother passed away from pneumonia. He had to deal with that as a young kid and a few years later, he had to deal with the passing of his mom and shortly after that, the passing of his dad. You hear about all of that, and it’s like no wonder why he became such a powerful person.”