Although we the people tossed George III more than two centuries ago, we can’t get over our fascination with the British royals. We follow their lives, devour their scandals and stay up all night to watch their weddings. And we love looking at their stuff: castles, jewels, carriages and clothes.

Starting Saturday, Feb. 4, we can get up close and personal with some of Princess Di‘s belongings at an exhibition called “Diana: A Celebration” at the Mall of America. (MOA web page here. Official Diana exhibit site here.) The wedding dress and its 25-foot train arrived earlier this week. Covering nine galleries, the exhibit also includes 28 of Diana’s designer dresses plus family heirlooms, personal mementos, home movies and photos. Advance VIP tickets ($23.50) are available at MOA guest service desks. General admission tickets ($21.50, less for children and seniors) go on sale Saturday. Or buy tickets online through T*****m*****, a name I can no longer bring myself to say out loud or type in full, due to its outrageous fees. Through June 10.

Where’s “The Garden of the Finzi-Continis,” promised for 2008, workshopped in 2010, rescheduled for 2013? Graydon Royce reports that Minnesota Opera no longer has plans to produce it, period.

The finalists for the 2012 Minnesota Book Awards were announced on Sunday. Winners will be named at the annual gala on Saturday, April 14. Tickets here.

Last October, a film sneaked into the ShowPlace ICON theater in St. Louis Park. One night, one showing of “Wynton Marsalis and Eric Clapton Play the Blues,” which was about to be released on DVD. A handful of people were there. While live music is best IMHO, really good concert films in HD are a close second, especially in the cushy comfort of the ICON, with popcorn. The best of both worlds: live broadcasts of concerts to movie theaters.

Tonight you can see Yo-Yo Ma‘s new project, “The Goat Rodeo Sessions,“ broadcast live from the House of Blues in Boston to the ICON and select other theaters in the metro area. While “Goat Rodeo” reminds me of the Rolling Stones’ ickily named album “Goats Head Soup,” this should be excellent: Ma with bluegrass fiddler Stuart Duncan, bassist Edgar Meyer, and mandolinist Chris Thile. How cross-genre is that? Showtime 6:30 p.m. Get tickets here to the ICON and other theaters in the metro area.

And Wednesday, Feb. 1: “The Chemical Brothers: Don’t Think.” The Chemical Bros. (England’s Tom Rowlands and Ed Simons) are a dance/electronic duo whose live concerts (they fill arenas) are heart-pounding sensory overloads of music, images, strobe lights, and lasers. They recently won the Los Angeles Film Critics Association Best Score award for their work on the “Hanna” soundtrack; they are also heard on the “Black Swan” soundtrack (remember the club scene?). Filmed at the Fuji Rock Festival in Japan before 50,000 fans, “Don‘t Think“”jolts you from the cinema deep into the violently psychedelic heart of a Japanese rave” (Rolling Stone). The trailer gave me goosebumps. 6:30 p.m., tickets here.

At MPR, Marianne Combs is co-hosting a whole week of arts programs on “Midday.” Yesterday (Monday) she and Sam Bergman of the Minnesota Orchestra talked about ways classical music is finding new audiences; guests included cellists Laura Sewell and Matt Haimovitz (more about him in a minute). Today (Tuesday): What to do with abandoned strip malls and empty parking lots? Leaders in design see great potential for finding new and creative uses for these “surplus spaces.” Co-host Larry Millett, architectural historian. Wednesday: The Art of Songwriting with Jeremy Messersmith (more about him in a minute, too). Thursday: The Sundance Film Festival with NPR’s arts reporter Neda Ulaby. Friday: The legacy of the Black Arts Movement, with performer, arts educator, and genuine good guy T. Mychael Rambo. “Midday” starts at 11.

The Strib‘s Graydon Royce loves “Ragtime: The Musical“ at the Park Square Theatre. Based on the novel by E.L.Doctorow, it’s the biggest production in the theater’s 36-year history. Here’s a video. Through Feb. 19. 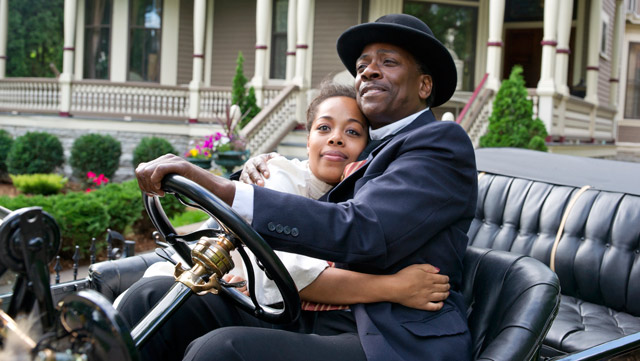 Tonight through March 3 at Intermedia Arts: “Not About Bombs,“ a collection of contemporary works by eminent female Iraqi artists curated by Tricia Khutoretsky of the Iraqi and American Reconciliation Project (IARP). Reception Friday, Feb. 3, at 7 p.m.

Opening Thursday, Feb. 2, in the CVA Gallery at the College of Visual Arts: “Illo Minn: Volume Three,“ featuring the work of 25 Minnesota illustrators including Nancy Carlson, Charles Griak, Eric Hanson, LK Hanson, Lindsay Nohl and Brent Schoonover. Each is showing a printed illustration, its original artwork, another original work, and a Moleskin notebook with a hand-decorated cover. The Moleskines will be sold in a silent auction during the opening reception. As a Moleskine junkie, reading this made my pencil-lead-stained fingers itch. Reception at 6 p.m. Through March 3.

Cellist Matt Haimovitz will play a solo cello concert, “Beyond Bach,” at the Weyerhaeuser Memorial Chapel on Friday, Feb. 3, in St. Paul. Haimovitz is known for thinking outside the concert hall box, playing nontraditional venues for classical music like jazz clubs, rock clubs, and bars. (That’s why Marianne Combs featured him on her “Midday” program yesterday.) Locally, he has performed at the Dakota and the Artists’ Quarter. The Weyerhaeuser concert is part of Macalester’s New Music Series, and it’s free. 8 p.m.

On Friday, Feb. 3 and Sunday, Feb. 5, the gentlemen of Keys Please! will return for their 11th annual concert, now a midwinter tradition for Twin Cities new music fans. Featuring pianist-composers Carei Thomas, Todd Harper and Paul Cantrell, “The Axiom of Keys Please” promises music of diverse genres, “poemmetry,” Brahms, Messiaen, “weather permitting” compositions (based on the weather — this year, these should be balmy tunes), and improvisations. Versatile, musical bassist Brian Roessler of the Fantastic Merlins is the special guest, and that’s always a good thing. Thomas, a revered musician, composer, and elder in our music community, called me Monday to put a bug in my ear about Keys Please! “It’s a nice neighborhood mix of people,” he said. Friday at 8 p.m., Sunday at 3:30 p.m. at Studio Z in Lowertown. Tickets ($10) at the door.

The chamber über-group Accordo launches its third season on Monday, Feb. 6, with romantic string sextets by Strauss, Schoenberg, and Tchaikovsky. Featuring top musicians from the SPCO and the Minnesota Orchestra, Accordo won raves for its first two seasons at the Southern. Now presented by an über-consortium — The Schubert Club, Northrop Concerts and Lectures, and Kate Nordstrum Projects — the season takes places at Christ Church Lutheran in Minneapolis, an Eliel Saarinen/Eero Saarinen-designed National Historic Landmark. Tickets here.

Jeremy Messersmith, whose CD “The Reluctant Graveyard” was named a Top 10 Album of 2010 by NPR, brings his beautifully crafted melodies and sweet harmonies to the Hopkins Center for the Arts on Tuesday, Feb. 7. Social hour at 6 p.m., concert at 7. Tickets here.

Heads up, jazzers: Chamber Music America has released the guidelines, applications, and FAQs for the 2012 New Jazz Works grants — serious ka-ching. Past recipients who have come through the Twin Cities include Chris Lightcap, Martin Bejerano, Taylor Ho Bynum, John Hollenbeck, Rudresh Mahanthappa, and Jean-Michel Pilc. Grant application workshops are scheduled for Wednesday, Feb. 8, at 3 p.m. and Wednesday, Feb. 22, at 3 p.m. To attend via teleconference, RSVP to program director Jeanette Vuocolo.