The Minnesota Orchestra has announced its 2012-13 classical and pops seasons. Highlights in a moment. But first, a bit of anxiety alleviation.

By now, most orchestra regulars know that Orchestra Hall closes in June and reopens in summer 2013 after a massive renovation. In the interim, the Minneapolis Convention Center will be the orchestra’s home away from home.

Change is good, but not when it messes with our routines. Thinking as an Orchestra Hall patron coming in from, say, Bloomington or White Bear Lake, I wondered — the Convention Center? Really? Isn’t that for auto shows and home-and-garden shows? What about parking? What if I get lost downtown? (I’m not saying that people from Bloomington or White Bear Lake don’t know their way around Minneapolis. But some people who live outside the city come into the city only for special events, like performances at Orchestra Hall. Stay with me, please.)

Turns out the Convention Center has a 2,150-seat, state-of-the-art concert hall. According to David Sailer, the orchestra’s director of marketing, subscription sales, and audience services, “This space is going to blow people away.

“We looked at multiple venues all over,” Sailer says, “and we landed right back home because we felt this was the location that would be best for our guests and our orchestra and least disruptive. It’s a gorgeous space with great amenities, no bad seats, and close to Orchestra Hall, so there’s not a lot of change.”

What about the sound? A new acoustical shell is being built for the classical concerts.

In short: Big whew. Up now on the orchestra’s website: a Plan Your Visit page with a Convention Center preview, interactive seating chart, and driving/parking directions. Subscribers will soon receive informational packages in the mail. And there’s always the money-back guarantee.

If you’d like to see the Convention Center hall before the seasons begin (and check out the acoustical shell), you can attend a “Home Away From Home” preview concert on Saturday, Feb. 18, at 8 p.m. or Wednesday, Feb. 22, at 7:30 p.m. Go here for more information and to buy tickets.

The Strib published Graydon Royce’s highlights for both the classical and pops seasons on Friday. I’m personally pumped about the Clarinet Festival (Nov. 9-17), a two-week pops/classical series featuring jazz clarinetist Anat Cohen, New Orleans clarinetist Evan Christopher, the Grammy-winning Klezmatics, the Duke Ellington Orchestra (with Christopher), and our own Maestro Vänskä, no slouch on the licorice stick. Also the complete Bach Brandenburgs in December.

The Convention Center isn’t the orchestra’s only venue during the renovation. A few concerts (like the Brandenburgs) will be held at Central Lutheran Church, which is also conveniently nearby. Sommerfest (which starts July 13) moves to the Ted Mann Concert Hall at the University of Minnesota. I’ve spent many evenings at the Ted Mann, former home of the Northrop Jazz concerts, and I like it a lot. One reason that venue was chosen: the terrace to the north, between the hall and the river, where Sommerfest’s usual outdoor shenanigans (food, beverage, live music) will continue.

One more bit of news about the orchestra. A three-concert series called “Minnesota Orchestra Chamber Music at MacPhail” begins Sunday, Feb. 12. Musicians from the orchestra will perform rarely heard works by Mozart and Ravel (Feb. 12), Schubert and Aho (March 18), and Brahms and Villa-Lobos (May 6) in MacPhail’s Antonello Hall, a jewel box of a venue. FMI and tickets.

And now for something completely different.

MinnPost went to the VIP preview on Friday for the Princess Diana exhibit at the Mall of America.

At the start: free drinks, pastries, and an actor dressed as a Beefeater, waiting to escort us inside. At the end: a Princess Di swag bag. In between: An exhibit that could easily have been cheesy but isn’t. Curated with care, nicely paced and respectfully presented, it manages to be both tasteful and blingy. It tugs at your heartstrings, but in a good way. 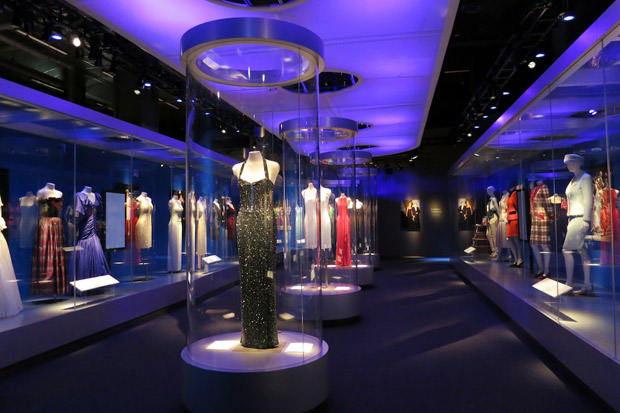 MinnPost photo by Pamela Espeland
The Princess Diana exhibit at the Mall of America manages to be both tasteful and blingy.

On Thursday, Feb. 9, a panel of local scholars of African-American literature will discuss the work of best-selling author Walter Mosley, the 2012 Givens Foundation Black Books Author. Participants include storyteller and educator Nothando Zulu; Arleta Little, executive director of the Givens Foundation; and Ezra Hyland of the African American Read-In and Black Men Reading programs. The discussion will be facilitated by Davu Seru, a Ph.D. candidate in African-American literature at the University of Minnesota, a Givens Foundation board member, and jazz drummer who will perform, as it happens, tonight at the Black Dog in St. Paul’s Lowertown with guitarist Dean Magraw and special guest Anthony Cox. The music starts at 7-ish, no cover.

Two musts at the Walker are fast approaching. First, the return of the Bill T. Jones/Arnie Zane Dance Company. Jones is a Kennedy Center honoree, MacArthur “Genius,” and two-time Tony winner. If you haven’t seen him, perhaps those creds will spark your curiosity. If you have seen him, you probably already have tickets to one of the most riveting, accomplished, compelling performers in America today. I could not take my eyes off him when I saw him during the opening of the new Walker in 2005.

Second, pianist Vijay Iyer plays a two-day mini-festival called “The Sound of Surprise.” This must have been booked ages ago, but the Walker’s performing arts curator Philip Bither knows how to pick them. Iyer is today’s “it” jazz pianist and composer, with a series of acclaimed recordings, commissions, grants, awards, Grammy nominations and critics’ poll wins and a recent appointment as director of the prestigious Banff International Workshop in Jazz and Creative Music. In the current cover story, JazzTimes magazine described Iyer’s skyrocketing career as “brimming with projects that balance new and old, brains and brawn, and East and West.” Over two nights at the Walker, March 1-3, he’ll play six sets: two solo, one with Wadada Leo Smith, one with his trio, one with Mike Ladd, and one with his newest group, Tirtha. FMI and tickets.

The Film Society of Minneapolis-St. Paul teased us on Facebook by announcing the dates of this year’s International Film Festival (April 12 to May 3), promising “some 250 documentary, narrative, and short films from more than 60 countries, visits from numerous international filmmakers and celebrities, and a host of gala events, parties, and receptions,” and providing zero specifics. Eager film beavers will want to buy their Gold or Platinum passes now and save.

At the Bell Museum of Natural History and Institute on the Environment, the second annual Sustainability Film Series continues with “Up the Yangtze,” an award-winning film that explores the profound impacts of the Three Gorges Dam, the world’s largest mega-dam. Go early and see “Chased by the Light: Jim Brandenburg’s 90-Day Journey,” which chronicles National Geographic photographer Brandenburg’s personal search for new challenge and spiritual renewal.

From 2008-11, ArtsLab worked with 16 smaller arts organizations in Minnesota. All reported significant growth in their budgets, stronger boards and strategic focus, and more engagement with their communities. Uri Sands of TU Dance reports that the experience had a “significant, transforming effect” on his company. In 2012, ArtsLab will form two peer learning communities of nonprofit arts organizations for an intensive two-year training and leadership program. Participating organizations will have the chance to apply for a grant of up to $20,000 to fund a new idea. ArtsLab is also developing a Leadership Idea Exchange. Applications available March 1 on the ArtsLab website.