If you enjoy the arts and you live in or near the Twin Cities, you quickly figure out that you can’t be everywhere and see everything, and you can only hope to choose wisely when events collide. I’m mostly pleased with the past several days, and here’s why.

On Thursday and Friday, the Walker made us feel we had all the time in the world to spend with the important and fascinating jazz pianist/composer Vijay Iyer. Performing arts curator Philip Bither brought Iyer in for two nights at the intimate McGuire Theater, one of my favorite listening rooms, then let him play what he wanted with the people he chose: trumpeter Wadada Leo Smith, his own exceptional piano trio (Stephan Crump on bass, Marcus Gilmore on drums), spoken word artist Mark Ladd, and a second trio, Tirtha, with Prasanna on guitar and Nitin Mitta on tabla. Each night also included a solo piano set.

In total, Iyer played for five hours, and hundreds of people experienced his music live. This was an event for the record books. David Cazares reviewed Thursday for MPR, and I covered both nights on my blog. P.S. On Friday, Prasanna, founder and president of Swarnabhoomi Academy of Music in India, announced a new partnership/student exchange with our own McNally Smith College of Music. So we’ll be seeing more of him. 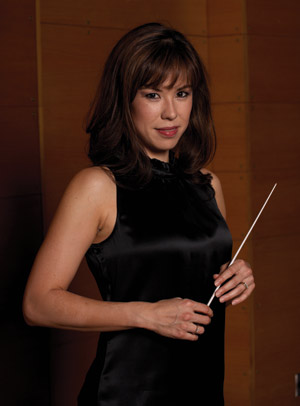 On Saturday, the Minnesota Orchestra took a sold-out crowd to Paris, romanced us, entertained us, made us laugh and made us cry. (If you can listen to an orchestra play the theme from “Umbrellas of Cherbourg” without tearing up, you have a spine of steel.) Produced by conductor Sarah Hicks and pops programmer Lilly Schwartz, “Springtime in Paris” was a near-perfect blend of music, pacing, seriousness and lightness that flew by. Featuring singers Robb Asklof and Kersten Rodau (most recently Emma Goldman in the Park Square’s smash hit “Ragtime”), guitarist Gil Gutiérrez, gifted Minneapolis-based accordionist Patrick Harison (in his Minnesota Orchestra debut), and dancers, it was both pops show and classics concert, with the Orchestra turning in marvelous performances of Gershwin’s complete “An American in Paris” and Debussy’s “Clair de Lune.” In short, satisfying and delightful.

On Wednesday, I found “The Birds” at the Guthrie disappointing. Instead of being brought to the edge of my seat, I felt battered by a too-loud soundtrack (was that a freight train, the tide coming in, or a flock of birds?) and, in time, indifferent to the story or the fates of the unappealing characters. Conor McPherson based his play on Daphne du Maurier’s short story, the same source Hitchcock consulted for his movie. I can see why Hitch skipped the heavy narrative and got down to the business of scaring the bejesus out of us. The “Angry Birds” cocktail napkins at the bar in the Dowling’s lobby were a witty touch.

In the March issue of Minnesota Monthly, Tim Gihring talks with Gülgün Kayim, Minneapolis’ director of arts, culture, and the creative economy, a new position at City Hall. Kayim’s job: to attract more artists, creative industries, and tourists to the city and make it a more attractive place to live. Kayim’s background includes Skewed Visions, an assistant directorship at the Bush Foundation, a year as a Walker Art Center resident artist, and four years as a program coordinator at the Weisman. She is an affiliate faculty member of the U of M’s Theater Arts & Dance program.

Twin Cities recording engineer, producer, and teacher Tom Tucker died unexpectedly on Thursday. The Strib’s Jon Bream remembers him here. On Facebook, Chris Riemenschneider notes that Tucker was “a real gentleman who worked well with others (including quite a few who are not so easy to work with).” Services are pending. Obituary here.

Mixed Blood has announced that “On the Spectrum,” a play by Ken LaZebnik commissioned by the theatre, is one of six finalists for the Harold and Mimi Steinberg/American Theatre Critics Association New Play Award. “On the Spectrum,” which questions whether autism is a disability or a difference, had its world premiere at Mixed Blood on Nov. 12, 20011. The $25,000 award will be presented March 31 at Actors Theater of Louisville during the Humana Festival of New American Plays.

Now through the end of March, you can help decide which Minnesota author will win the Readers’ Choice award at this year’s Minnesota Book Awards. To vote, ‘like’ this Facebook page. The winner will be announced alongside the eight book category winners at the gala on Saturday, April 4. Need help deciding? Head to the Readers’ Choice Event on Friday, March 16, where several finalists will give short presentations about their books. Meanwhile, Allan Kornblum, founder and senior editor of Coffee House Press, has been named this year’s Kay Sexton Award Winner, given in recognition of outstanding work in fostering reading and literary activity in Minnesota.

Do you have a spare oboe, bassoon, or French horn? Consider donating it to Minnesota State Arts Board grant recipient and Richfield resident Elizabeth Prielozny Barnes, who is collecting instruments and supplies for young music students in Paraguay. Prielozny Barnes will travel there later this month; she and her husband, Jim, hope to take with them donated instruments and other supplies (strings, reeds, mutes, valve oil, and so on). Cash is also welcome. FMI, email elizabeth@voxcorda.org or call 612-869-0186 today or tomorrow.

Last Friday in MinnPost, travel writer Catherine Watson mused about Camino de Santiago, Spain’s legendary 500-year-pilgrims’ path, and announced an upcoming event in St. Paul: a gathering of Camino veterans and the curious, with a sneak peak at a new PBS documentary that follows five pilgrims on their journeys. The event is free, but director/producer Lydia B. Smith needs help finishing the project, so expect a fundraising pitch. Wednesday, March 7, at Unity Unitarian Church in St. Paul. FMI and trailer here. At least three other Minnesotans have walked the Camino: Tom Bartel and Kristin Henning, former publishers of the Rake, and jewelry artist Duke Klassen. I would have asked them for comments, but Tom and Kris are currently in Vietnam and Duke is in Australia.

Also on Wednesday, saxophonist, composer and NEA Jazz Master Benny Golson brings his quartet to the Dakota for two sets. Jazz greatness, with Mike LeDonne on piano, Ray Drummond on bass, Jason Marsalis on drums, and the elegant Nnenna Freelon as guest vocalist. 7 and 9 p.m. FMI and tickets.

For you, artists and would-be artists: Hopkins Center for the Arts hosts a midwinter Festival of Artists on Friday, March 9, from 4-7. Well-known artists including photographer Craig Blacklock will give demonstrations on watercolor, acrylic, photography, and mystery writing. Free, with refreshments and door prizes.

You have until March 15 to see “Mni Sota: Reflections of Time and Place” at the U’s Katherine E. Nash Gallery. This group exhibition features contemporary pieces by Native American artists of the Minnesota region including beadwork, birch bark, fiber art, jewelry, painting, sculpture, textiles, and quillwork. From here, “Mni Sota” moves to the Mille Lacs Indian Museum in Onamia (April 1-May 18) and UMD’s Tweed Museum in Duluth (May 28-June 30)

Tickets are on sale now for:

Tickets go on sale Saturday at 10 a.m. for the Red Hot Chili Peppers at Target Center on Tuesday, Oct. 30.