The winners of this year’s prestigious Sally Ordway Irvine Awards are Rick Jacobson, Ross Sutter, Kevin Smith, Ta-Coumba T. Aiken, and TU Dance. The awards were presented last night at the Ordway, the St. Paul performing arts center Irvine inspired with her advocacy and her generosity.

Jacobson won in the Arts Access category. His voice is the one that blind and visually impaired people often hear through their headsets at the Guthrie, the Penumbra, and other theaters. Since 1994, he has offered audio descriptions for more than 850 theater productions. He accepted his Sally by saying, “With a grateful smile on his face, Rick picks up his award and leaves the stage.”

Sutter (Education) nurtures a passion for the arts in schools and cultural organizations with his engaging performances and long-term residencies.

Smith (Commitment) served as president and CEO of Minnesota Opera from 1986 to 2011, during which the Opera expanded its season, doubled its attendance and grew its annual budget from $1.5 million to $9 million. He created the Minnesota Opera Center and helped to establish the Arts Partnership, a collaboration among Minnesota Opera, the SPCO, the Schubert Club and the Ordway. 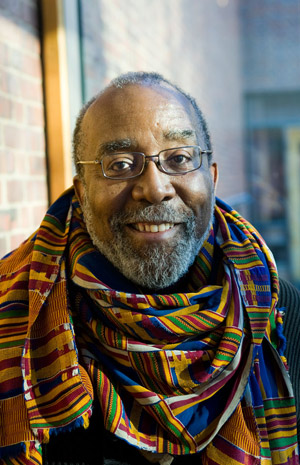 Aiken (Vision) says of his vibrant, colorful paintings, “I create art to heal the hearts and souls of people.” He is the force behind some of Minnesota’s most acclaimed public artworks, working in collaboration with schools, neighborhood organizations and city planning and development departments.

Founded in 2004 by Alvin Ailey alums Toni Pierce-Sands and Uri Sands, TU Dance (Initiative) has become a leading voice on the Minnesota dance scene. In 2011, the organization opened TU Dance Center, a hub for dance education, training, and practice in St. Paul.

The evening was hosted by MPR’s Alison Young. Sen. Al Franken gave a videotaped welcome in which he called the Sally Awards “a tribute to the people who make Minnesota’s arts community one of the most vibrant in the world.” Winners received a crystal sculpture and $2,500. Since the inaugural awards in 1992, more than 70 Minnesota artists, administrators, and organizations have been honored.

Moving on to a few of the many arts opportunities that await us this week:

What is it like to be a farmer today? How do you feel about urban farms? In light of Minneapolis’ new Urban Agriculture Policy Plan, approved last week by the city council’s zoning and planning committee, tonight’s showing of “The Greenhorns” is perfectly timed. The 50-minute documentary film focuses on America’s young farming community: their lives, practices, stories and needs. Stay for a panel discussion on urban farming and gardening in Minneapolis. Doors open at 7 p.m., screening at 7:30 at the Casket Cinema, Studio #145 in the Casket Arts Building at 681 17th Ave. NE in Minneapolis.  FMI and trailer here. Free (donations accepted).

Not that there’s anything wrong with art as entertainment, but if you feel that art should also, on occasion, slap you silly, don’t miss Dutch avant-garde sound poet Jaap Blonk. Combining words (his own, others’ and invented), vocalizations, breath, shouts, screams, electronics and effects, he creates a unique sonic world. You can’t help but be affected, one way or another. Here’s a clip. “Free Verse: Jaap Blonk” is co-sponsored by the Rain Taxi Review of Books, the Walker and the University of Minnesota’s Institute for Advanced Study and Imagine Fund. Thursday at 7 p.m., Walker Art Center Cinema. Free, but tickets are required; pick up tix at the Walker’s Bazinet Lobby Desk starting at 6. (Someone should do an exit poll. This being Minnesota, the most frequent post-performance comment would likely be “That was … different.”) FMI.

An audience favorite of the 2010 Fringe, Glen Berger’s “Underneath the Lintel” is the tale of a reclusive librarian who finds a book 123 years overdue and decides to track down the borrower. The New York Times called it a “curiously funny drama of life’s most curious stuff … not to be missed.” Pat O’Brien stars. At Camp Cabaret in St. Paul’ Camp Bar, March 29-April 1. FMI and tickets.

Jazz trumpeter/composer John Raymond grew up in Golden Valley, where his teachers recognized his talents early. While in Minnesota, he performed regularly with Nachito Herrera. He moved to New York City in 2009 and recently recorded his first full-length CD, “Strength & Song.” Raymond comes home this week for a CD release at the Dakota on Thursday night starting at 7 p.m. Next Monday, he’ll be at Jazz Central for a series of events: workshop (5 p.m.), interactive open rehearsal (7:30 p.m.), performance (8:30 p.m.), and open jam session (10 p.m.), all free (donations accepted) except the workshop ($30). To reserve a place in the workshop, email strengthandsongrecords@gmail.com. Read my interview with Raymond here.

Something I totally forgot to mention earlier (sorry about that) was “Kickstarter for Creatives,” a how-to presentation held at the Soap Factory last Sunday. Kickstarter has become the world’s largest funding platform for all kinds of creative projects, from music to film, theater, books, crafts, dance and almost anything else you can name. In 2012, it is expected that Kickstarter will distribute more money to the arts than the NEA. John Raymond’s “Strength & Song” was a Kickstarter project. The Soap Factory has its own Kickstarter page. 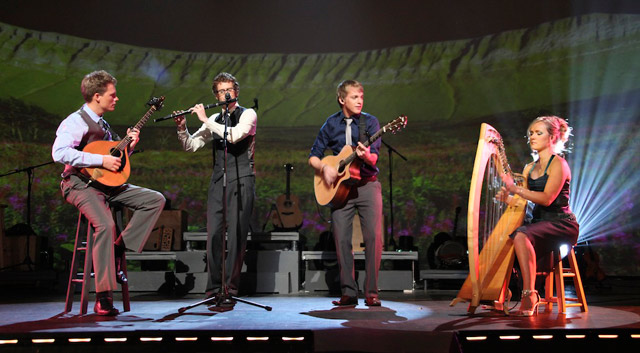 Also on Thursday (a big night for the arts this week): Celtic Crossroads returns to the Burnsville Performing Arts Center. The new World Fusion Tour features traditional Irish music, bluegrass, gypsy, jazz and percussive Irish dance. It wasn’t too long ago that “Riverdance” was everywhere and I for one got sick of it, but an all-out monster of an Irish music show can be tremendously exciting. Here’s a trailer from the Celtic Crossroads PBS special. FMI and tickets.

This Thursday through Saturday, the SPCO performs the U.S. premiere of “Feldman’s Sixpenny Editions,” composed by Gerald Barry and co-commissioned by the SPCO and the London Sinfonietta. You can stream the Sinfonietta’s March 2011 performance here, then see and hear the new piece live as the SPCO brings it to Trinity Lutheran Church in Stillwater (Thursday), Wooddale Church in Eden Prairie (Friday), and St. Paul’s United Church of Christ (Saturday). One critic praised Barry’s work for its “exuberant wit” and “infectious life.” Also on the program: Schubert’s Rondo in A for Violin and Strings and Schubert’s Symphony No. 4 in C minor, the “Tragic.” Thomas Zehetmair conducts. The Saturday and Sunday performances include pre-concert lectures. FMI and tickets.

On Thursday (stop already!) and Friday, powerful, passionate singer/songwriter/multi-instrumentalist Claudia Schmidt releases her latest CD, “Bend in the River,” at the Open Eye Figure Theatre in Minneapolis. Featuring 16 songs from her five Red House recordings, “Bend in the River” is both a retrospective and a reminder of why Schmidt matters so much to music. The Open Eye is a perfect place to see her; warm and intimate, it’s one of my favorite spaces in the Twin Cities. With Dean Magraw and Marc Anderson. 7:30 p.m. FMI and tickets.

Park Square Theatre’s excellent “American Family” continues through April 7. I’ve thought often about the play since seeing it earlier this month. I reviewed it briefly last week; the Strib’s Graydon Royce called it a “complex and aching story.” Watch a brief video here. FMI and tickets.

Aerosmith is coming to the Target Center on June 16, the first date of their Global Warming Tour. Now that 64-year-old lead singer Stephen Tyler is a judge on “American Idol,” the kids might want to see what their parents have been going on about for lo these many years. Cheap Trick opens. Tickets go on sale to the general public on Saturday at 10 a.m.

The Houston Ballet took my breath away on Friday night at the Orpheum. I confess to sort of avoiding ballet since my last attempt to sit through a classical ballet became a fight to stay awake. (It took forever for the corps de ballet to come on stage, in single file: step, step, arabesque; step, step, arabesque; step, step, zzzzz.) By combining classical and contemporary moves, strength and speed, gorgeousness and wit, the Houston surprised and delighted. Friday’s program included “ONE/end/ONE” by Finnish choreographer (and former hockey player) Jormal Elo, recipient of the first Rudolph Nureyev Prize for New Dance, set to Mozart’s Violin Concerto No. 4 (with moments danced in silence); “Indigo,” a love story choreographed by artistic director Stanton Welch in 1999, set to cello concertos by Vivaldi; and “Rush,” a work for many dancers (sometimes up to 16) choreographed by Christopher Wheeldon, set to music by Czech composer Bohuslav Martinu. Here’s a clip from “Indigo.”

The Houston was part of the 2011-12 Northrop Dance Season, being held at the Orpheum during Northrop’s reno. The season continues with France’s Ballet Preljocaj (‘rezh-oh-kahzh) on April 13-14 and ends with the Alvin Ailey American Dance Theater on May 1-2. FMI and tickets here and here. The 2012-13 season will be announced in early April.

A visit to Jax Café in Northeast Minneapolis is always a step back in time, and on Sunday night the year was 1967. Jax is the scene of the annual “Mad Men” new-season premiere party hosted by DJ Jake Rudh. Tickets to this year’s event sold out almost as soon as they were announced, Hundreds of fans in retro attire gathered for cocktails, dinner, a screening and an after party with live music by Vic Volare. The crowd looked fabulous. I scrounged a few things from the closet in our basement and tried unsuccessfully to fake it. I’m saving the list of vintage shops that vita.mn published last Wednesday for when I get serious about next year.