Fans of fine craft know that the annual American Craft Council Show is a high-end juried show with work by hundreds of artists from across the U.S. and Canada. They might not know the ACC is a national nonprofit educational organization, or that it moved its headquarters to Minneapolis in 2010 after almost 70 years in New York City.

This year’s ACC Show starts Friday at the Saint Paul RiverCentre and runs through Sunday. More than 10,000 people are expected to attend.

We asked Executive Director Chris Amundsen how the council is enjoying the Twin Cities. “We could not have picked a better location,” Amundsen said. “This is a thriving arts community, with people who understand and value craft, and we have been welcomed with open arms.” Amundsen, a former COO of the Greater Twin Cities United Way, was named executive director in May 2010.

The ACC advocates for craft, publishes a bimonthly magazine, presents conferences, workshops and seminars, and maintains a large research library. The annual shows — which also take place in Baltimore, Atlanta, and San Francisco — are major draws, and the council works to keep them fresh. This year’s St. Paul show offers five new categories: Foodieware, Men’s Department, Bride-to-Be, Local, and Blue Chip Club — pieces valued at $10,000 and up. In this economy? “A lot of expensive items have sold this year,” Amundsen says. “If people have the means, they want something unique and beautiful.” Not ready for Blue Chip? Look for the Handmade Under $100 category, which still guarantees high-quality, one-of-a-kind pieces.

The ACC has identified several Twin Cities “style makers” who are passionate about craft and will be featured at the show. A stage will host live demonstrations by local organizations including the Textile Center, Northern Clay Center, and Minnesota Woodturners. “Anytime you come to the show,” promises marketing/communication director Pamela Diamond, “you’re going to see something being made.” Good reading: Dylan Thomas’s Southwest Journal article on Minneapolis artists Judith Kinghorn and Julie Timm. Friday, 10 a.m. to 8 p.m. Saturday: 10 a.m. to 6 p.m. Sunday: 10 a.m. to 5 p.m. Tickets at the door or online. For once, buying from Ticketmaster will not gouge a hole in your wallet.

The Loft has announced the 2012 McKnight Artist Fellowships for Writers. This year’s winners include four Minnesota poets and one children’s author. Each will receive $25,000. The poets are Mark Conway, whose collections include “Dreaming Man, Face Down”; Amy McCann, who teaches creative writing at Northwestern College; Jude Nutter, two-time winner of the Minnesota Book Award; and Matt Rasmussen, who teaches at Gustavus Adolphus. The winning children’s author is Lauren Stringer, an artist, author, and theatrical designer for Circus Juventas. 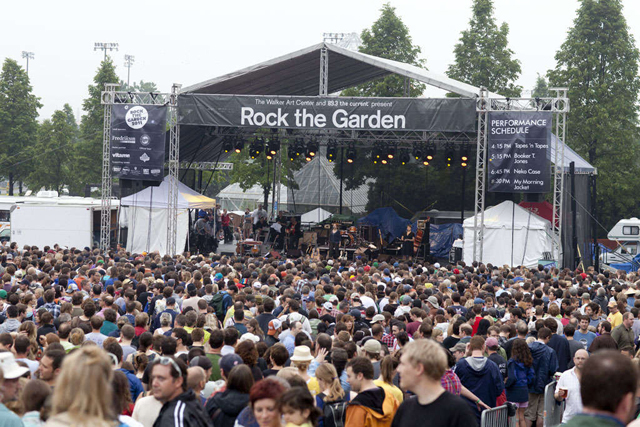 Courtesy of the Walker Art CenterRock the Garden has once again sold out.

At a live event at the Fitz late Wednesday afternoon, the Walker and the Current announced this year’s Rock the Garden lineup: local upstarts Howler, art rockers Tune-Yards, local supergroup Doomtree (the first hip-hop collective to play the annual blowout), Duluth’s favorite sons, Trampled by Turtles, and hometown heroes (by way of Brooklyn) The Hold Steady. Tickets went on sale that afternoon to Walker and MPR members and quickly sold out. Call the Walker’s box office at 612-375-7600 to get waitlisted.

Who’s playing this year’s Basilica Block Party? Find out later today (Friday) at the Crooked Pint, where Cities 97 host Jason Nagel will announce the lineup. He’ll reveal a different band every 15 minutes starting at 3 p.m. Show up or listen live on the ray-dee-oh. Tickets go on sale at 10 a.m. on May 5. 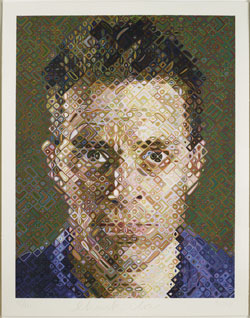 Want a Rembrandt? How about a Rauschenberg? This weekend, serious art collectors and the curious will flock to the Minneapolis Institute of Arts for the 19th annual Minneapolis Print & Drawing Fair. Twelve prominent dealers from the U.S. and Europe will offer a wide selection of museum-quality prints, drawings, watercolors, pastels, monotypes, and artists’ books in a variety of styles, periods, and prices. Browse works on paper from Old Masters to emerging artists. MIA curators will be on hand to help. Formerly a paid show, admission is now free. Saturday and Sunday, Apr. 21-22, 11 a.m. to 5 p.m.

High-school art teachers in the 5th Congressional District: Rep. Keith Ellison is hosting the annual Congressional Art Competition, which recognizes and encourages students’ talent in the visual arts. Work by first-prize winners nationwide will be displayed in the U.S. Capitol. Work by second- and third-place winners from Minnesota will be displayed in Ellison’s offices in Washington and Minneapolis. Student release forms and one-paragraph artist statements are due to Aya.Johnson@mail.house.gov by 4 p.m. on Monday, Apr. 23. Artwork will be collected Apr. 27 from 3-6 p.m. at the Minneapolis Park & Recreation Board.

The Park & Recreation Board has issued a Call for Artists to Minnesota artists and artist teams for design, fabrication and installation of a veterans memorial in Sheridan Park on the banks of the Mississippi River. The memorial will consist of a sculpture and 10  markers. We learned about this from mnartists.org. All working Minnesota artists should habitually, compulsively check the site’s Current News and Opportunities page.

As Homer Simpson says, “Mmmm, beer.” On Saturday, Harriet Brewing welcomes spring and summer selections like Sol Bock and West Side Belgian with a daylong festival featuring local art, food vendors, live music, the grand opening of the tap room, and beer, beer, beer. If you haven’t yet caught this, beer in the Twin Cities these days is all about microbrews. And are they ever tasty. The music includes trumpeter Zack Lozier’s Super Jazz Band Combo starting at 4. FMI and tickets.

Courtesy of the Minnesota OrchestraSweet Honey in the Rock comes to town this weekend.

Sweet Honey in the Rock, the Grammy-winning African-American female a cappella ensemble, has a big Twin Cities fan base. They’ll turn out in force on Saturday night at Orchestra Hall, when Sweet Honey, the Minnesota Orchestra, and the VocalEssence Ensemble Singers perform Bill Banfield’s Symphony No. 10, “Affirmations for a New World.” Co-commissioned by the Minnesota Orchestra, the Kennedy Center and the National Symphony Orchestra, and the Harris Theater for Music and Dance in Chicago, “Affirmations” had its world premiere at the Kennedy Center last weekend. The second half of the program will feature Sweet Honey in concert. 8 p.m. Saturday. FMI and tickets.

Composer, author and recording artist Banfield, now a professor at Berklee College of Music, has strong Minnesota connections. He was the Endowed Chair of Humanities and Culture at the University of St. Thomas, where he founded the American Cultural Studies program and served as professor of music from 1997-2005. He was composer-in-residence with the Minnesota Orchestra and the Minnesota Opera, is a member of the Minnesota Composers Forum, and was commissioned by the state to write the music for the opening of the Wabasha Bridge. Banfield will be in the house on Saturday.

Also on Saturday, the great trumpeter Terell Stafford (who directs the jazz studies program at Temple University) joins our own JazzMN Orchestra for the final concert of its 2011-12 season. That night, the orchestra will announce its 2012-13 season. (We’ll tell you about that next week.) 7:30 p.m. Saturday at the Hopkins High School Performing Arts Center. Tickets here or at the door.

Saturday is Record Store Day. Record stores all over the Twin Cities and the U.S. (some are still standing) will have titles released exclusively for the occasion and available only at brick-and-mortar stores, most on vinyl. Here’s a shopping list. Here’s a list of participating stores in Minnesota. And here’s what I want: “American Buffalo,” Noiseland Industries’ vinyl LP featuring songs by Poliça, Trampled by Turtles, Pert Near Sandstone, Halloween, Alaska, and more. And Branford Marsalis’ “Four MFs Playin’ Tunes.” Leave home early, drive around like a maniac, and if you don’t have a turntable, the Needle Doctor does.

Still pumped about our Pulitzers? Poet Tracy K. Smith discusses her prize-winning book, “Life on Mars,” with the Loft’s Chris Jones here. Smith keynotes the Loft Poetry Conference (May 18-20) with National Book Award winner Mark Doty and reads at the Loft on Friday, May 18.

Thanks to MinnPost reader Susan Herridge for calling our attention to a second Pulitzer finalist with Minnesota connections. Mara Hvistendahl, a nominee for the General Nonfiction prize for her book “Unnatural Selection: Choosing Boys Over Girls, and the Consequences of a World Full of Men” was born in Northfield and raised in the Twin Cities.

Actually, at home in front of my TV with a dachshund in my lap, I saw a screener of “The Girls in the Band,” an award-winning documentary you can view this weekend at the Minneapolis St. Paul International Film Festival. Judy Chaikin’s film chronicles the struggle of women trying to make it as jazz musicians, traditionally as much a man’s world as professional football. Featuring trailblazers from the International Sweethearts of Rhythm, an interracial all-female band that braved the South during Jim Crow, to Maria Schneider, Geri Allen, Terri Lyne Carrington and Esperanza Spalding, it’s an eye-opener. Watch for the look on then-young pianist Marian McPartland’s face when a TV host asks her if being a woman is a handicap, then comments gallantly, “Now that I consider it myself, I think it’s a great advantage since you’re so decorative.” For jazz fans, music lovers, and musicians of all genders. Trailer here. Saturday at 5:15 and Sunday at 6:30 p.m. FMI and tickets. Chaikin will be present.

Also at the film fest (I haven’t yet seen this): “King for Two Days,” which documents drummer Dave King’s two-night residency at the Walker in 2010. Monday at 7 p.m. FMI and tickets. Afterparty at the Aster with the Dave King Trucking Company.

Music in the Zoo season packages. New concerts have been added, with more to come.

An Evening with Vince Gill at the State. Someday, we hope very far in the future, Aaron Neville will stand on one side of the pearly gates, Vince Gill on the other, and everyone will be good just so they can hear those two sing them in. Gill has won more Grammys than any male country artist and sold 26 million albums. I heart Vince Gill. Saturday, Oct. 13, 8 p.m. Tickets here or at the State Theatre box office (no fees).