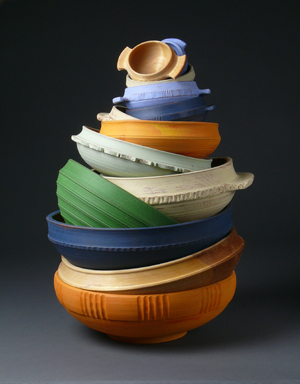 Hundreds of doors will open this weekend in historic buildings around St. Paul, and thousands of people will walk through. Many will leave with something: a painting, photograph, print or pot, jewelry, stained glass, fiber art, sculpture. From tonight through Sunday, spring’s Saint Paul Art Crawl will turn much of the city into a combined gallery hop, music festival, and community celebration — even, on Friday, an eclectic and colorful parade.

Begun sometime around 1991 by artists living in the Lowertown Lofts Artists Cooperative — “nobody’s really sure” when the first official crawl took place, according to Robyn Priestley, executive director of the nonprofit St. Paul Art Collective, sponsor and organizer — the twice-yearly festival (this is the 35th) has grown from a few studio open houses to an event almost too large to cover in a single weekend. This year’s includes some 300 artists’ studios and galleries in more than 25 buildings, most in Lowertown but now spreading to University Avenue/Raymond Avenue, Landmark Center, Grand Avenue, Harriet Island, Midway, the Eastside and Cathedral Hill. Many locations will feature live performances: fire dancing, ballet rehearsals, music, a stick bomb detonation.

To kick things off properly, the McNally Smith SoundCrawl/Art Crawl Hybrid Marching Band Parade will wind through the city for two hours on Friday starting at 6:30. Confirmed participating bands and groups include Kill the Vultures, the McNasty Brass, jugglers, the Art Cars, and humans on sticks (Segways).

“We’re still here, and we survived the construction,” Priestley says. “There are a lot of new people in the neighborhood — new young people and others returning to their art. There’s a whole new energy in the area.” 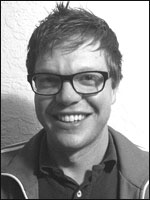 Matt Rasmussen, Gustavus Adolphus alum and current Visiting Assistant Professor of English, has won the 2012 Walt Whitman Award, one of the nation’s most prestigious first-book prizes. Given annually to an American poet who has yet to publish a book, it includes a $5,000 cash prize, a one-month residency at the Vermont Studio Center, and publication of his book, “Black Aperture,” by Louisiana State University Press, publisher of Whitman winners since 1992.

I’m expecting an email any minute from David Enyeart announcing a Rasmussen reading at Common Good Books in St. Paul. Enyeart, formerly at Magers & Quinn in Minneapolis, is a super-booker of literary events. Now that Common Good has moved from its previous location (a basement on the corner of Selby and Dale) to its new digs (a big, tin-ceilinged, sunlit street-level room at the corner of Grand and Snelling), Enyeart is filling the calendar with readings and other special events. We went to the first reading held there, by novelist Bart Schneider (“Nameless Dame”) on April 11. The books were barely on the shelves and staff looked a bit frantic, but it’s a sweet space, very inviting, that deserves to be a destination. Readings are free.

The 29th annual Art in Bloom is under way at the Minneapolis Institute of Arts. Presented each spring by the Friends of the Institute, AIB is a four-day celebration of arts and flowers. Wander through the galleries and enjoy more than 150 floral arrangements inspired by paintings in the museum’s collection.

This year’s theme is “Art in the Garden,” which suggests that whole gardens can be seen as works of art. It’s all about beauty, and taking time to smell the flowers. AIB also includes lectures, demonstrations, workshops, guided tours, a scavenger hunt, and other special events. Ends Sunday, Apr. 29. Schedule and tickets here. BTW: MIA’s popular “Sports Show” ends soon: May 13. Catch it while you can. Coming in June: “Rembrandt in America,” the largest selection of Rembrandt works assembled in the U.S. in a generation. Wow.

Artists, how would you like to design the Cedar’s new T-shirt? The rules: Deadline Friday, May 18. One- or two-color design (the shirts will be darker colors). Must incorporate the words “Minneapolis” AND “The Cedar” or “The Cedar Cultural Center.” Send all designs in JPG format with your contact info to Michael at mrossetto@thecedar.org. The prizes: Finalists receive a pair of tickets to a upcoming Cedar concert. The winner receives $200, a pair of tickets, a free T-shirt, and glory.

Graphic designers, the Walker has issued a Call for Applicants for the Walker Design Fellowship 2012-13. Take the online ART TEST to see if you’re a good match. Answer all 18 questions correctly and see a special message. I would tell you what it says if I had passed the test, but I didn’t, and I’m trying very hard not to take it personally, although I might just have ruined my own weekend. Fellows are employed full-time by the Walker for one year.

Filmmakers, IMS Films (IMS = Intermational Market Square) is accepting applications for its 2012 Films Showcase. Five directors will have the chance to create films inspired by design. What you get, if you’re chosen: a $2000 grant to produce a 5-7 minute short film on the theme “Live Exceptionally,” a $2000 credit toward Pixel Farm post and finishing services, access to film equipment and production facilities, and (if you win) a $1000 Best of Show cash award. But first, you’ll have to complete the application and slog through language like this: “Directors will have the opportunity to create content inspired by IMS’s brand platform.” Gaaah. And you’ll have to join the Minnesota Center for Media Arts, which you probably should belong to anyway, if you’re a filmmaker. FMI and application. 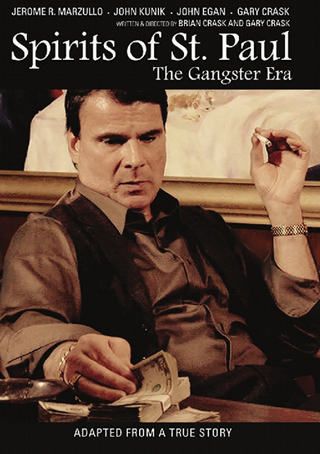 “Spirits of St. Paul,” Brian and Gary Crask’s film about St. Paul’s gangster days (the 1920s and ’30s), screened at the St. Anthony Main Theatre at the end of March. It opens tonight (Friday) at the considerably cushier Showplace Icon in St. Louis Park. Through Thursday, May 3. Trailer here. Tickets here (reserve seats in advance) or at the door.

What’s being called “the guitar event of the year” comes to Hamline’s Sundin Music Hall tonight. Brazilian guitarist, composer, and arranger Yamandu Costa is a master of the Brazilian seven-stringed nylon guitar (violão de 7 cordas). Video here. The Minnesota Guitar Society is sponsoring his performance. Costa’s name, by the way, means “the precursor of the waters of the world.” For tickets, call 612-677-1151.

Legendary hip-hop trio De La Soul plays the Cabooze tonight. That’s De La Soul of “3 Feet High and Rising” and “De La Soul Is Dead” (hint: wilting daisies). Writing for Insight Culture Weekly, Nate Patrin notes, “What once seemed like a torch-passing contrast between eras now feels like a flashback to a late ’80s when hardcore hip-hop and boho party rap weren’t always at odds, and that balance has been one of the things that’s made De La one of the most enduring hip-hop acts going.” Here’s “Saturdays” from “3 Feet High.” At work? Turn it up. Tickets here. 18+.

The Minnesota Orchestra’s principal oboe, Basil Reeve, plays the final solos of his 41-year tenure with the Orchestra this weekend at Orchestra Hall. Mark Wigglesworth conducts Ravel’s “Daphnis and Chloe” (with the Minnesota Chorale) and Michael Berkeley’s “Oboe Concerto” tonight (Friday) and tomorrow at 8 p.m. FMI and tickets.

What else is goin’ on? On Saturday, vocalist Bruce Henry presents a tribute to Marvin Gaye at the Hopkins Center for the Arts. Henry, who spent many years in Minneapolis before moving back home to Chicago four years ago, has a three-octave range and enormous charisma. I’ve heard him sing many times and have always left happy. He’ll be backed by a nine-piece band and joined by Twin Cities vocalists Yolande Bruce, Aaron Keith Stewart, and Debbie Duncan. 8 p.m. FMI and tickets. Here’s Henry singing “Red Clay” (not a Gaye tune, but listen to that voice.)

Michael Lewis may be the only Twin Cities musician featured in two films at the Minneapolis St. Paul International Film Festival. He appeared in Monday night’s “King for Two Days,” the documentary about drummer Dave King, and can be seen again in “Andrew Bird: Fever Year,” screening Saturday at 7 p.m. and Sunday at 1 p.m. Also in the Bird film: Martin Dosh and Jeremy Ylvisaker. FMI and tickets. Saturday’s after party at the Aster features Ghostband, Jake Hanson, and Neil Weir.

Another film with local connections screens Sunday at the festival: Philip Montgomery’s award-winning documentary “#ReGENERATION,” about the state of social activism among today’s youth, the genesis of the Occupy movement, and the impact of technology and the media. Produced and narrated by Ryan Gosling, the film also features Noam Chomsky, the late Howard Zinn, Adbusters’ Kalle Lasn, Mos Def, and Talib Kweli. Writer/director Montgomery grew up in Eagan and graduated from Eagan High School; its teachers and students figure prominently in his film. Sunday, Apr. 29, 7 p.m. Montgomery will be present. FMI and tickets. Trailer here.

Monday is the first annual International Jazz Day. (Didn’t we just have National Jazz Day? Yes, but this is different.) A collaboration among UNESCO, jazz great Herbie Hancock (UNESCO Goodwill Ambassador), and the Thelonious Monk Institute of Jazz, it starts early in Paris (today) with a daylong series of programs and performances, then moves to the U.S. with a sunrise concert in New Orleans’ Congo Square and a sunset concert in New York at the United Nations General Assembly Hall. For Hancock and other featured luminaries, the frequent flyer miles will add up fast. FMI and live video broadcasts.

Out and about: Capsule review 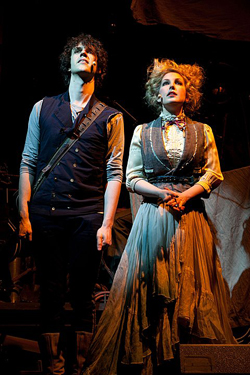 I went to “Futurity: A Musical by the Lisps” at the Walker last night expecting a hipster steampunk sci-fi story set to indie rock. What I saw was a serious show about war, the longing for peace, and the hope that technology will solve all of our problems. The set — in part a large “Steam Brain” made of things found in junkyards, alleyways, thrift stores and flea markets — reminded me of guitarist Pat Metheny’s Orchestrion, a giant mechanical orchestra; the Steam Brain is, in fact, an oversized percussion instrument, with Lisps drummer Eric Farber, bassist/sousaphonist Lorenzo Wolff and organist Ben Simon seated within. The story takes place in the battlefields of the American Civil War, where Julian Munro is a Union soldier, and the English study of Ada Lovelace, a mathematician regarded as the world’s first computer programmer. Munro (Lisps singer and guitarist César Alvarez) is fictional; Lovelace (Lisps singer Sammy Tunis) is not. The two correspond but never meet. Some of the lyrics are multisyllabic and chewy; the music seems too simple to carry the weight of these words, for example, sung by Lovelace: “What’s the animating force from which intelligence emerges?/Is it material in nature, or a spiritual conversion?” (At which point my husband borrowed my notebook and wrote, “She blinded me with science.”) “Futurity” is a bit slow in parts, and the music is on the folky/old-timey edges of indie rock, but it’s absorbing and very different from most musicals you’ll ever see. A Walker commission; continues tonight (Friday) and Saturday in the McGuire Theater. FMI and tickets.