The 2012 Tony nominations, announced Tuesday, have more than a few Minnesota connections. Burnsville native Laura Osnes is up for her performance as Bonnie in the short-lived musical “Bonnie & Clyde.” Osnes made her Broadway debut as Sandy in “Grease” in 2007 after winning the role on a reality show that aired on NBC. Moorhead State alum Jan Maxwell is nominated for Stephen Sondheim’s “Follies.” (Chris Hewitt of the Pi Press points out that “both actresses are likely to lose to frontrunner Audra McDonald in “Porgy and Bess.”)

Tracie Bennet was nominated for her tour-de-force performance as Judy Garland in “End of the Rainbow,” which made its U.S. debut at the Guthrie before moving to Broadway. Guthrie actor Frank Langella has been nominated for his fourth Tony, for “Man and Boy.” And two plays on the Guthrie’s 2012-13 season have each received several Tony nods: “Other Desert Cities” by Jon Robin Baltz and “Clybourne Park” by Bruce Norris.

A new documentary about Paul Simon’s groundbreaking, Grammy-winning “Graceland” album has been making the rounds of film festivals this spring. Directed by Emmy and Peabody winner Joe Berlinger, it has won awards at SXSW, the Cleveland International Film Festival, and the Nashville Film Festival. “Under African Skies” has its Minnesota premiere next Thursday, May 9, at the Trylon microcinema as part of Sound Unseen’s program of monthly film screenings. I’m telling you now because the Trylon really is a microcinema — just 50 seats — and if you care about Paul Simon, world music and music history, you’ll want to see it. 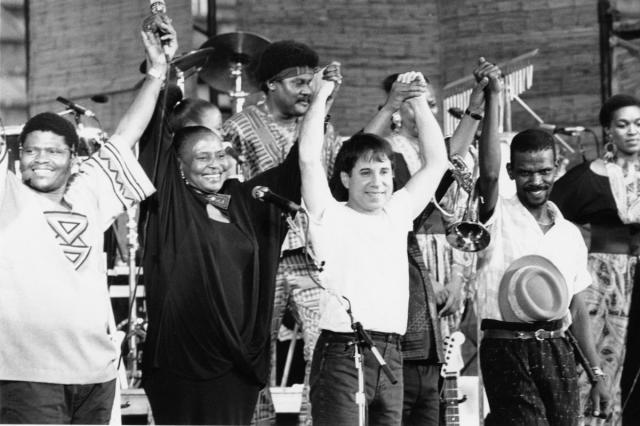 The film follows Simon as he returns to South Africa 25 years after “Graceland” and meets again with many of the musicians heard on the album, some of whom (Ladysmith Black Mambazo) went on to international careers because of it. Today these kinds of cultural exchanges are common. We can see world music as often as we want at the Cedar (provided visiting artists are granted visas, and that’s another topic). But when Simon first traveled to South Africa to record with black musicians, it was still a white-run apartheid state. Simon violated a United Nations’ cultural boycott, ignored the advice of Harry Belafonte, sidestepped the African National Congress and infuriated South Africa’s Artists Against Apartheid. When the album was released in 1986, the protests and debates began. Was Simon in the wrong, or does art trump politics? Should politics dictate what artists do? What is the obligation of the artist, to make art or take sides? It’s a fascinating film, the questions are still relevant, and the music hasn’t aged a bit. Includes interviews with Oprah Winfrey, Paul McCartney, Belafonte, David Byrne, Philip Glass, and others. Watch the trailer here. Tickets here. Congrats to Sound Unseen’s Jim Brunzell for snapping this up.

The Metropolitan Regional Arts Council (MRAC) has awarded Creative Intersections grants to Bedlam Theatre, Footprints Collective, Lyndale Neighborhood Association, Obsidian Arts, the Rev. Martin Luther King Jr. Park Legacy Council, Rainbow Rumpus, One Voice Mixed Chorus, and Rosetown Playhouse. Creative Intersection grants fund projects that build and enrich communities through an engagement in the arts. Grant amounts range from $4,240 to $15,000. I’m especially interested in Lyndale’s plan to create “box wraps” — public art around the big metal utility boxes that usually serve as graffiti magnets. In 2010, the Kingfield neighborhood wrapped many of its boxes with local photography. Lyndale’s plan is for imagery “reflecting the needs, hopes and dreams of those who live closest to each box.” Too bad we can’t simply cover these unsightly boxes with cloaks of invisibility. Talk about uglifying our neighborhoods.

The Saint Paul Chamber Orchestra, which continues to confound by making top-notch classical music both affordable and widely accessible, performs four free community concerts in May. Featuring music by Beethoven, Puccini, Rossini and Haydn, the concerts are scheduled for Thursday, May 17 (7:30 p.m.) at Saint Andrew’s Lutheran Church in Mahtomedi; Friday, May 18 (7 p.m.) at Saint Philip the Deacon Lutheran Church in Plymouth; Saturday, May 19 (8 p.m.) at Colonial Church in Edina; and Sunday, May 20 (3 p.m.) at First Lutheran Church in Columbia Heights. Seating is general admission but tickets are required. Make reservations here.

Minnesota’s museums are economic powerhouses, according to a new U of M study. In 2011, the state’s 562 documented museums contributed $674 in economic impact, including $250 million in wages paid to some 5,300 employees, $157 million in capital improvements, and $53 million in tourist dollars. An estimated 1.7 million people visited museums outside their home regions in 2011, spending an average of $24.35 each. Last week, American Association of Museums president Ford W. Bell told the Strib’s Christy DeSmith, “There are 850 million visits in the United States every year, which is six times the attendance for professional sporting events. But museums are still viewed as amenities.” Even when they say “ka-ching.”

The 38th Annual May Day Parade begins at 1 p.m. Sunday at the corner of 25th St. E. and Bloomington Ave. in Minneapolis, travels south on Bloomington to 34th St. E. and turns west toward Powderhorn Park, where the May Day Ceremony and Festival commence around 3 p.m. The parade is a thrilling spectacle. Giant puppets, floats, bands, dancers, storytellers, and costumed community members march in a moving theatrical performance. Tens of thousands of watchers line the streets. This year’s theme is “The End of the World as We Know It, The Beginning as We Live It Now,” a meditation on consumerism, community, and the need for new beginnings. The ceremony retells the story of the parade and ends in a Tree of Life Ceremony with beating drums and a Sun Flotilla. The festival features music, dancing, poetry, food, and canoe rides. FMI. Update: MayDay Festival and Ceremony postponed until Sunday, May 13 due to weather and standing water in Powderhorn Park.

Among the truly great things about living in the Twin Cities are the free outdoor summer concerts in our parks. Starting in May, the Minneapolis Park & Recreation Board and Saint Paul Parks and Recreation present literally hundreds of live music performances — all kinds of music for all kinds of tastes in parks all over both cities. Minneapolis offers music 7 days/week from May 28 to Sept. 3 and movies Monday-Saturday starting June 9. FMI and schedules here. St. Paul gives us band concerts, dance and choral performances, plays and musicals from May 13 to Sept. 2. All performances are free except for theater-style musicals at Como Lakeside Pavilion in July and August. Calendar here. Big Band Fans, here’s an offer just for you. Drop me an email and I’ll send you a current schedule of all 85 Big Band concerts compiled by Jerry Swanberg, host of KBEM’s “Big Band Scene.”

The Live on the Drive summer concert series begins June 14 with Regina Marie Williams, an Ivey-winning actor (currently in Park Square’s “Doubt”) and vocalist who released her latest CD, “When a Woman Loves a Man,” at the Dakota earlier this spring. Joining her are Thom West on piano, Dave Karr on saxophone, Kevin Washington on drums and Jay Young on bass. On June 12, it’s Tim Mahoney, who appeared last year on NBC’s “The Voice” and is finalizing a new EP due out in June. On Aug. 9, the Minneapolis-based, seven-piece band Ipso Factor plays its unique brand of reggae, funk and jazz. This is the fifth year of the free evening series held at Victory Memorial and 34th Ave. in Minneapolis. 6 p.m.-8 p.m. 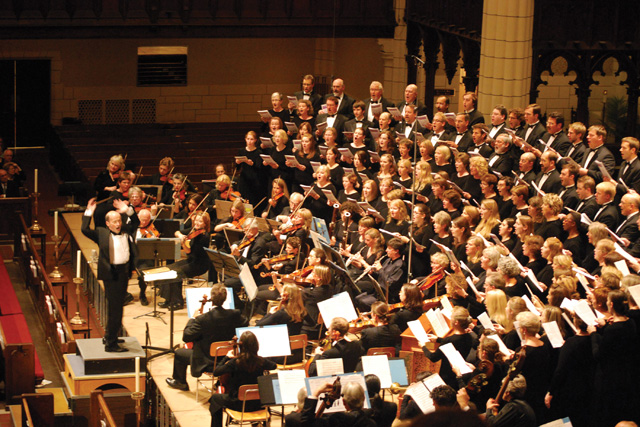 Classical MPR joins the free summer music movement with Harmony in the Park featuring VocalEssence, Minnesota Boychoir and One Voice Mixed Chorus. Choral music fans, mark this a must-see. Thursday, June 7 at Minnehaha Falls Park Bandshell. The concert is part of Classical MPR’s new choral initiative, a series of on-air, online and onstage programs that includes a newly-launched 24/7 stream dedicated to choral music. All choral music, all the time, the stream is focusing now on Minnesota choirs (VocalEssence, Cantus, St. Olaf Choir and others) and will broaden to include more Minnesota groups and ensembles from elsewhere. Classical MPR will present three renowned choirs in concert during 2013: King’s College Choir, the Mormon Tabernacle Choir (in a rare visit to Minnesota), and the Estonian Philharmonic Chamber Choir.

Monday: Red Green’s “Wit & Wisdom Tour” at the O’Shaughnessy. Homespun handyman humor in plaid shirts. I confess: I don’t really get Red Green. But maybe I’m not supposed to. A lot of Minnesotans love him, even though he’s Canadian. 7 p.m. FMI and tickets.

On sale Saturday at 10 a.m.: Tickets to this year’s Basilica Block Party, set for July 6-7. Train, the Avett Brothers, Cake and OAR headline the annual bash on the Basilica’s campus in downtown Minneapolis. Prices go up after June 25. Tickets online and at all Ticketmaster and Barrio locations. Will this event get the same response as Rock the Garden, which sold out in 90 minutes? Maybe Cities 97 and the Block Party organizers could take a hint from the Walker and MPR and sell tickets at the same time the bands are announced. Otherwise all that excitement and momentum seem wasted.