Classical ballet in Burnsville? “The Wizard of Oz” as a ballet? Both true. Starting Friday, “Wizard of Oz — The Ballet” returns to the main stage of the Burnsville Performing Arts Center (BPAC), where it had its world premiere in 2011. Conceived by Denise Vogt, artistic director of the Twin Cities Ballet, a resident company of BPAC, the production tells the familiar story through dance (ballet, modern, and jazz) and classical music by Tchaikovsky, Debussy, Strauss, Saint-Saëns, Khachaturian and other composers. No words, no “Over the Rainbow” or “Ding-Dong! The Witch Is Dead.”

The cast of 100 includes 80 students, some as young as 7. “One of the things we excel at is incorporating students and kids into a professional production,” says Rick Vogt, associate artistic director. In this family-friendly version, the story begins in a schoolhouse and the monkeys are not scary. Friday-Sunday, May 11-13. Tickets here. “BPAC is closer to the Twin Cities than you think,” Vogt notes.

Fishing opener? Forget it. Mother’s Day? Whatever. Pottery lovers, clear your weekend for the 20th Annual Pottery Studio Tour & Sale by the Minnesota Potters of the Upper St. Croix River, a.k.a. The Tour. Seven Minnesota potters open their studios to 41 distinguished guest artists from 16 states. Come away with a mug, a pitcher, a serving platter or bowl, or an entire set of dishes. Speaking as a person with way too many teapots, I find handmade pottery a pleasure to use. Friday-Sunday, May 11-13. Friday and Saturday, 10-6; Sunday, 10-5. Watch for the yellow signs with the red pitchers. 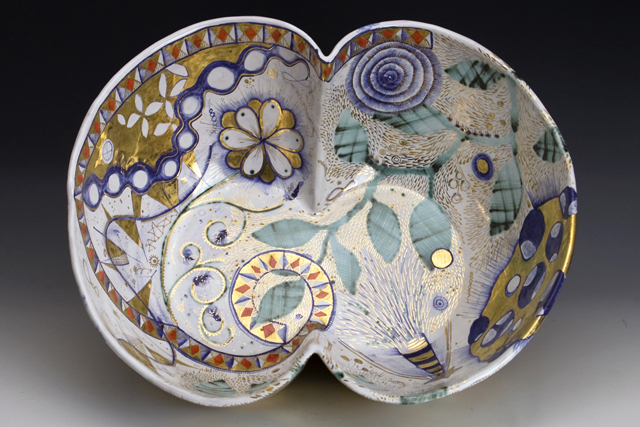 Now online: the redesigned and relaunched Northeast Minneapolis Arts Association (NEMAA) website, packed with Art-A-Whirl information including an Artist Directory and downloadable map. Go there on your smart phone and it’s mobile-friendly. But you’ll probably still want to pick up a copy of the paper directory and guide, since the site is all-inclusive. Next year, an app? This year’s Art-A-Whirl starts Friday, May 18, at 5 p.m. and ends Sunday, May 20, at 5 p.m.

Chanhassen Dinner Theatres has announced an educational and professional alliance with the University of Minnesota-Duluth. CDT will provide internships, apprenticeships, mentorships and fellowships for students in UMD’s Department of Theatre, including paid and unpaid learning opportunities that will qualify for college credit. Visiting artists from CDT will travel to UMD to review student portfolios, hold workshops, and offer feedback. Both CDT and UMD will enter into a joint scholarship agreement with the University of Minnesota Foundation to help fund an annual scholarship award for a UMD theater student. Possible future projects include production collaborations, commissions, and sharing of resources.

Park Square Theatre is nearing the $4.2 million it needs to build a second stage in the Hamm Building in St. Paul. It has already completed a $500,000 remodeling of its proscenium auditorium. With the new stage, which everyone hopes will be ready by the fall of 2013, Park Square will be able to increase its artistic programming from 10 to 18 shows per season.

Mary Abbe reports that Frank Gehry’s Winton Guest House is now open for tours. Formerly overlooking Lake Minnetonka, the house was moved to rural Owatonna when developer Kirt Woodhouse (who bought the property from the original owners) donated it to the University of St. Thomas in 2008. Tours are offered the second weekend of each month from May-September. The Winton Guest House is the only Gehry-designed residence open to the public. (Yes, this is the same Gehry who designed our own Weisman Art Museum.) Learn more about the house here. Tour information here.

Orchestra Hall will soon undergo a major renovation, and the Minnesota Orchestra will move to the auditorium at the Minneapolis  Convention Center for most of 2012-13. Before the doors close, the current season ends with a series of bangs. On Saturday, May 26, the Preservation Hall Jazz Band and New Orleans Jazz Orchestra hold a traditional New Orleans funeral. Tickets (the few that remain) here. From June 7-10, soprano Deborah Voigt sings the final scene from Richard Strauss’s “Salome.” With or without the severed head of John the Baptist? The program also includes Mahler’s final symphony, the Tenth. Fittingly, these are the final classical subscription concerts of 2011-12. The Season Finale on Thursday-Friday, June 14-15, will rattle a few ceiling cubes with music by Copland, Orff, Beethoven and other composers and an A-list of guests including Stanislaw Skrowaczewski, Doc Severinsen, Irvin Mayfield, Kantorei, the Minnesota Boychoir, and Black Label Movement. MPR’s Brian Newhouse hosts. Tickets (also scarce) here and here.

Caponi Art Park and Learning Center in Eagan has announced its summer performance series, a colorful lineup that ranges from bluegrass (Monroe Crossing) to Japanese drumming (Mu Daiko), Shakespeare (Cromulent Shakespeare Company’s “The Merry Wives of Windsor”) to Sousa (the 45-piece First John Philip Sousa Memorial Band). Most events are held on Sundays at 6:30 p.m. in the Theater in the Woods outdoor amphitheater. Free and open to the public; $5 suggested donation. FMI. Also at Caponi: a photography program with digital photography workshops, a contest, and an exhibition. FMI.

Ever since learning that Kate Nordstrum was hired by the SPCO to create a new music series, I’ve been nibbling my nails in anticipation. We now know the name of her series, Liquid Music, and the first event: a co-presentation with the Walker of Laurie Anderson’s “Dirtday.” Anderson is a creative force and a wearer of many hats: visual artist, composer, author, photographer, poet, filmmaker, vocalist, instrumentalist. “Dirtday,” a collection of songs and stories told in Anderson’s hallucinatory language, deals with Darwinism, feminism, the Tibetan Book of the Dead, Willie Nelson, and alien popes, among other topics. Tickets are on sale now to SPCO subscribers and Walker members by phone only (612-375-7600). They go on sale to the general public on Thursday, May 17.

A rare opportunity to hear Claudia Schmidt in the intimate Bryant Lake Bowl Theater, where you can also drink beer and eat pad thai. Schmidt and Jim May will share stories, poems, songs and conversaion as part of the BLB’s “Two Chairs Telling” series. FMI and tickets. 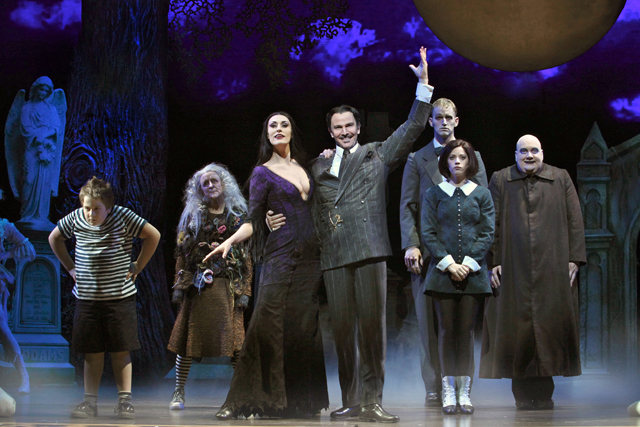 “The Addams Family: The Broadway Musical” opens at the Ordway. Truth be told, reviews for the Broadway production were not great, and the show closed on Dec. 31, 2011. But it’s been a touring juggernaut, crisscrossing the U.S. and about to go international. The musical is based on the original Charles Addams cartoons, not the TV series or the movie. The video preview (“freak peek”) looks silly but also irresistible. Through May 20. FMI and tickets.

Colin Stetson performs in the Walker’s Perlman Gallery at 6, 7, and 8 p.m. Born and raised in Michigan, now based in Montreal, the multi-instrumentalist (saxophones, clarinets, cornet, French horn, flute) has played and recorded with Arcade Fire, Bon Iver, and Laurie Anderson. I like a man whose last name is a cowboy hat. Part of the “Sound Horizon” series. A co-presentation of the Walker and the American Composers Forum. Free.

Dylan Hicks reads at the Loft. Apparently not content with being a songwriter/musician (four albums including the brand-new “Dylan Hicks Sings Bolling Greene”) and writer (Village Voice, New York Times, Star Tribune, City Pages, Rain Taxi), Hicks is now a novelist as well. “Boarded Windows” has just been published by Coffee House Press, which recently had a finalist in this year’s Pulitzers. “Sings Bolling Greene” is a companion/soundtrack to the novel, an interesting concept. Do you read and listen, or read, then listen? Or listen, then read? 7 p.m. Free and open to the public. If you miss Hicks this Thursday, you can catch him next Thursday with poet Dobby Gibson as part of the Friends of the Northeast Library Author series. 6:30 p.m. at the Northeast Library on Central Ave. NE.

To George Clinton & Parliament Funkadelic at the Brick on Saturday, May 19. (The Mothership is now in the collection of the Smithsonian’s National Museum of African American History and Culture, which opens in 2015.) Will the Brick’s renovations solve its problems (overselling, overcrowding, poor sightlines)? Tickets here.

To Frankie Valli and the Four Seasons at the State on Saturday, Sept. 22. Sherry, baby, won’t you come out tonight? (Was it really 1962 when that song was #1?) Tickets here or at the State Theatre box office.