The SPCO has released the full line-up for Kate Nordstrum’s new Liquid Music series. It’s as imaginative, provocative and alluring as we hoped — and expected. Nordstrum has a history of programming artists worth hearing, even if you’ve never heard of them before. Like the Walker’s Philip Bither, she’s a teacher and a preacher, passionate about music, a person of catholic tastes. Announced earlier, a sort of sneak peek: Laurie Anderson’s “Dirtday,” a co-presentation with the Walker on Nov. 2-3.

On Dec. 14-15 at SPCO Center in St. Paul’s Hamm Building: the premiere of the first evening-length work by Reid Anderson of The Bad Plus. He’ll be on electronics, not double bass, joined by SPCO principal violinists Steven Copes and Ruggero Allifranchini (both of the chamber group Accordo), SPCO cellist David Huckaby and percussionist Jeff Ballard (of the Brad Mehldau Trio, which performed at the Walker with the SPCO in 2010). Laurie Anderson was a score, but now we’re rolling.

Feb. 9, 2013, at the Amsterdam: Ben Frost, Australian-born, Iceland-based composer, electronic music producer, and collaborator with people like Björk, Brian Eno and Nico Muhly. Wire magazine described him as “Arvo Pärt as arranged by Trent Reznor.” Feb. 26-27 at SPCO Center: the Midwest premiere of Sarah Kirkland Snider’s “Penelope” (excerpts; inspired by Homer’s “Odyssey”) and new work from My Brightest Diamond and yMusic, with Shara Worden (My Brightest Diamond, The Decemberists). On March 27-28 at SPCO Center: the world premiere of a work by Nika Danilova of Zola Jesus, arranged by former SPCO artistic partner Stephen Prutsman. The evening opens with a set by Twin Cities-based percussionist Ian Ding and Ashley Bathgate, cellist with Bang on a Can All-Stars. April 25-26 at SPCO Center: “Julius Eastman Memorial Dinner,” a performance piece featuring music by African-American composer Eastman. With Jace Clayton (DJ/rupture), Sharifa Rhodes-Pitts, deVon Gray (dVRG of Heiruspecs), Ensemble 61, and other artists TBA.

Liquid Music sounds as if it should be expensive, but all events except Laurie Anderson are priced at $10. FMI and tickets (single and series).

So much music was announced recently that we might as well lay it out.

The 331 Club in Northeast Minneapolis is programming three days of music (May 18, 19, 20) for Art-A-Whirl, indoors and out. A sampling: Vicious Vicious, Birthday Suits, No Bird Sing, Small Cities, Alpha Consumer, Bethany Larson and the Bee’s Knees. Complete schedule here. You’ll find live music all over Art-A-Whirl.

On Sunday, May 20, the 4th Annual Lyn Lake Street Festival occupies the two-block stretch of Lyndale between 28th and Lake. There’s music on two stages from noon until 7 p.m. Highlights: Kid Dakota, Omar Bliss, Mayda, and Halloween, Alaska. Free and open to everyone. FMI. 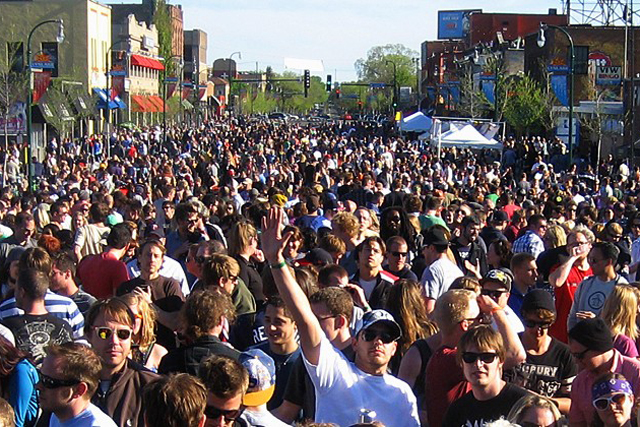 The latest additions to the State Fair Grandstand Concert Series are Anita Baker (Sunday, Aug. 26), Journey with special guests Pat Benatar and Loverboy (Saturday, Sept. 1), and rappers Wiz Khalifa and Mac Miller, who will close out the Great Minnesota Get-Together on Labor Day, Sept. 3. I haven’t heard Khalifa and Miller, but the Strib called them “raunchy rappers.” Well then. All three concerts go on sale Saturday, May 19, at 10 a.m. Check the rest of the lineup and buy tickets here.

From the Dept. of Not-So-Good News: On Tuesday, the Minnesota Orchestra laid off nine full-time and seven part-time members of its administrative staff. The shakeup was not unexpected. The orchestra is running a big deficit as it prepares to move out of Orchestra Hall during major renovations. The 2011-12 season ends in early June, and the musicians are currently in negotiations for a new contract. Graydon Royce has more details on the layoffs. Last month, Royce took a close look at the challenges facing the orchestra. It’s worth a read as we wait to see what other shoes will drop.

From the Dept. of Whack-a-Mole: Earlier this week, Rep. Steve Drazkowski, R-Mazeppa, offered a floor amendment to divert Legacy dollars to pay for debt service for some of the state’s building projects. This attempt to substitute Legacy dollars for an existing funding source is not allowed by the Constitution, and enough legislators knew that to vote it down. Advocacy and watchdog organization Minnesota Citizens for the Arts (MCA) notes that 14 bills (so far) have been introduced this year to divert Legacy funds to other things. Whack, whack, whack.

From the Dept. of Crossed Fingers: Last Sunday’s MayDay Parade & Festival were rained out and have been rescheduled for this Sunday, May 13.

The MovingCompany’s “The War Within – All’s Fair” at the Southern. Their description: “A theatrical mayhem inspired by the theme of ‘war’ – not the war we typically think of, far away in some other country, but the war within ourselves.”  An opening night party with the actors will be held on the Southern stage following the performance. Through June 10. Tickets here. 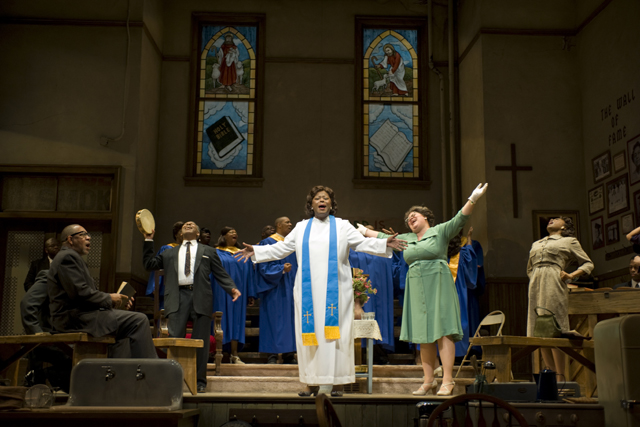 “The Amen Corner” at the Guthrie. James Baldwin’s play with music stars Ivey winner Greta Oglesby (“Caroline, or Change”) as Sister Margaret Alexander, leader of a Harlem congregation, whose life changes when her son unexpectedly reunites her with her estranged husband, a jazz musician. Produced by Penumbra Theatre Company, directed by Lou Bellamy, with music by a 10-member gospel choir from Minneapolis’ Fellowship Missionary Baptist Church. Through June 17 on the thrust stage. FMI and tickets.

“Self-[contained]” and “Regis Master: Richard Shaw” at Northern Clay Center. The former includes freestanding ceramic sculptures and large-scale vessels depicting the human face or figure. The latter celebrates the life and work of Shaw, a California ceramic artist, UC Berkeley professor and trompe l’oeil ceramics master. Opening reception tonight, 6 p.m. to 9 p.m. Shaw won’t be at Northern Clay, but he will be at the Minneapolis Institute of Arts on Saturday, May 26, to deliver his Regis Masters lecture at 2 p.m. The lecture is free. FMI.

David Zambrono’s “Soul Project” at the Walker. Dancers from Mozambique, Slovenia, Greece, Slovakia, the U.S. and Venezuela perform to soul music recordings by Aretha Franklin, James Brown, Bettye LaVette and others. You won’t be sitting and watching; you’ll be on stage, with the show happening around you and beside you. Tonight and tomorrow, 8 p.m. in the McGuire Theater. FMI and tickets.

Herman Jones My Funk Brother dance band at Mainstreet Bar and Grill in Hopkins. R&B, soul, funk and funk fusion, blues and jazz from the 1970s and ’80s. Saturday, May 12, 9:30 p.m. A press release fell into my email box last month, I clicked on some links, and they made me happy. So do the $8 burgers at the Mainstreet, and the onion rings. Funk is fun.

Do something special for Mom on Sunday (that’s Mother’s Day, clueless ones). Skip the overcrowded brunches and take her to Macalester’s Weyerhaeuser Chapel for “Honor Thy Mother,” a tribute to moms hosted by Garrison Keillor, with authors Patricia Hampl, Shannon Olson, and Julie Schumacher. An afternoon of stories and songs. Admission is free, but a donation for the Jeremiah Program for single mothers is appreciated. 3 p.m.

Tickets go on sale Monday for the debut season of the Mill City Summer Opera. See “Pagliacci” under the stars at the Mill City Museum starting July 12. The staging, sets, and costumes will reflect the era of the fire at the Minneapolis mill in 1878. People are pretty excited about this.

Capsule review: “Are You Now or Have You Ever Been…”

From the moment he walks on stage and sits down behind a typewriter, you can’t take your eyes off Gavin Lawrence. And not just because he’s the only person you see for the first half of “Are You Now or Have You Ever Been…,” the new play by Carlyle Brown at the Guthrie’s Dowling Studio. As the poet Langston Hughes, Lawrence shifts from anxious to confident, fearful to passionate, from a man who dreads the next day to a man through whom the Muse passes like a lightning bolt.

Set in 1953 on the night before Hughes is scheduled to testify before the House Un-American Activities Committee led by Sen. Joseph McCarthy, and the day of his testimony, “Are You Now…” is framed as a poet writing a poem, but within that frame lie questions (and answers) about what it means to be an artist, to be a black artist in a white world, to live in your head, to make a living, to face your enemies and defend yourself without losing yourself. The second half, during which Hughes faces his accusers — four white men seated at a high table, asking trick questions — is chilling. Brown plays the role of Hughes’ attorney, mostly silent except for a brief outburst for which he is chided. At a relatively short 1:45, the play clips along, powered by strong acting, smart staging, Noël Raymond’s sensitive direction, and Brown’s literate, graceful writing. Closes May 20. FMI and tickets.