Park Square Theatre is producing its first-ever Neil Simon play, “Laughter on the 23rd Floor,” a behind-the-scenes romp at a fictional 1950s TV comedy show. The characters were inspired by Mel Brooks, Selma Diamond, Carl Reiner, Larry Gelbart, Jackie Gleason, Sid Caesar and Simon himself, who got his first big break when he was hired as a writer for Caesar’s “Your Show of Shows.” Ari Hoptman, Craig Johnson, Michael Paul Levin and John Catron are among the cast; Zach Curtis directs. I can hardly wait to see this. It sounds like the perfect summertime entertainment. Previews June 1-7, regular run June 8-July 8. FMI and tickets.

There’s so much buzz around Park Square’s 2012-13 production of “Sherlock Holmes and the Suicide Club” (a regional premiere written by Jeffrey Hatcher) that the theater has expanded its audition hours; more than 180 actors have signed up. Park Square fave Steve Hendrickson has already been tapped for Holmes (the role he played in 2010’s “The Case of the Jersey Lily”) but nine parts remain. 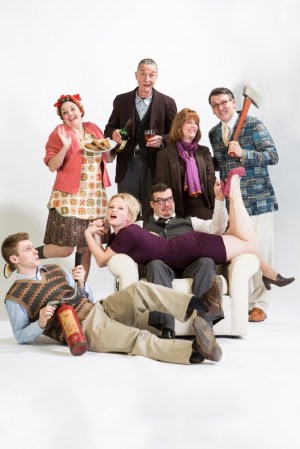 Courtesy of the Jungle Theater“Noises Off!’ at the Jungle

The Jungle means to tickle us with “Noises Off!” — Michael Frayn’s Tony-nominated play about a troupe of terrible actors in a dreadful British sex comedy. Director Joel Sass promises “a perfectly calibrated ensemble.” The play was partly inspired by Frayn’s own experiences with one of his earlier farces. (Is this the summer of self-referential hilarity?) With Bradley Greenwald, Kirby Bennet, Stephen D’Ambrose and Cheryl Willis. June 8-July 29. FMI and tickets.

The Guthrie has released more details about its 2012-13 season. The original announcement in mid-April sparked debate about the lack of diversity in the theater’s 50th anniversary lineup. Starting in February, the Dowling Studio will host “Buzzer” by Tracey Scott Wilson, directed by Marion McClinton. A co-commission between the Guthrie and Pillsbury House Theatre, “Buzzer” ran at Pillsbury House earlier this year. (You may wish you’d seen it there, where tickets were pay-what-you-can.) Also at the Dowling beginning in March: Mu Performing Arts’ production of R.A. Shiomi’s “Yellow Fever,” directed by Shiomi.

The Guthrie’s production of “Clybourne Park” on the proscenium stage (June 1-Aug. 4) will be directed by Lisa Peterson. Plus there’s “As You Like It,” presented by New York’s The Acting Company in association with the Guthrie (Jan. 12-Feb. 3), and “An Iliad,” a one-performer interpretation of Homer’s epic (in the Robert Fagles translation, for you classical Greek geeks) starring Stephen Yoakam (May 4-26).

For active-duty military personnel and their families: admission to the Walker is free from Memorial Day through Labor Day. The Walker is participating in the Blue Star Museums program, a collaboration among the National Endowment for the Arts, Blue Star Families, the U.S. Department of Defense, and more than 1,500 museums across America. Go here and click on Minnesota for a list of participating museums in our state. More in the Twin Cities: the American Swedish Institute, the Bell Museum of Natural History, the Weisman, the Hennepin History Museum, and the Minneapolis Institute. Note to all other museums in the state: Why not end the first Minnesota Museums Month by becoming a Blue Star Museum? Send an email or call Wendy Clark at 202-682-5451. It’s a holiday weekend, so it’s ok if you do this on Tuesday.

James H. Billington has a great job. As the Librarian of Congress, he presides over one of the world’s most important cultural institutions. Earlier this week, he added 25 sound recordings that are “culturally, historically or aesthetically significant” to the Library’s National Recording Registry. Among them: a compilation of interviews with former slaves, Leonard Bernstein’s debut performance with the New York Philharmonic, “Green Onions” by Booker T. & The M.G.’s, Donna Summer’s “I Feel Love,” and (last but not least, since the listing is chronological) the “Purple Rain” soundtrack by Prince and the Revolution. Would you like to nominate a recording for next year’s registry? Go right ahead.

The Loft has received a $150,000 grant to support its spoken-word poetry programming, overseen by Bao Phi. The grant will fund the next two years of Phi’s renowned showcase, Equilibrium (known as EQ). Eight shows are planned, two per year. The next will be in September.

Innova Recordings, the label of the American Composers Forum, has made available an astonishing 30 years of music by McKnight composer fellows on a playlist you can stream for free. The ACF has administered the composer fellowships from the start, and Innova’s Philip Blackburn has compiled a fascinating sampler of tracks by the Doug Little Quartet, Neal & Leandra, Carei Thomas, George Cartwright, Mary Ellen Childs, the Lark Quartet, Ruth MacKenzie, Zeitgeist and many more. You’ll need the Spotify app (also free). Once you have that, here’s the playlist.

Things to do this Memorial Day weekend

See Sam Fischer’s military family-drama “Memorial Day.” Winner of the Top Audience Award for Best Narrative at this year’s Minneapolis-St. Paul International Film Festival, it stars James Cromwell (“The Artist”), Jonathan Bennett and Jackson Bond. Briefly, 13-year-old Kyle discovers his grandfather’s WWII footlocker, and the two strike a deal: Kyle can pick any three objects inside, and Grandpa Bud will tell him the stories behind each one. Here’s the trailer. At the St. Anthony Main Theatre starting today (Friday, May 25). FMI and tickets.

Make a video about an everyday hero or heroine in your life, using the song “Unsung” by the Minnesota R&B band Mint Condition as your soundtrack. Then enter your video in a contest. If you win, you’ll receive a $500 cash prize and a $1,000 Giving Card you can use to make a donation to any organization you choose that’s listed on GiveMN.org. If your video gets the most online views, you’ll win a guitar autographed by Mint Condition. By the way, GiveMN.org is about the easiest way there is to donate money when you get the urge.

Watch “Under African Skies” at home on TV. The award-winning film about the making of Paul Simon’s historic “Graceland” album screened at the Trylon earlier this month; it airs on A&E tonight and early Saturday morning. (Thanks to reader Gary Gardner for the tip.)

Hear live music. Already under way at the Lab Theater, the experimental music festival Heliotrope Nine continues through Sunday, loud and proud. Erik Thompson tells you all about it in City Pages. Today through Sunday, Austrian conductor Hans Graf leads the SPCO in works by Mozart and Varése, with award-winning pianist (and Los Angeles Chamber Orchestra music director) Jeffrey Kahane on the bench. FMI and tickets. On Saturday, young jazz lions gather for the final concert of the Jazz at Studio Z season. Trumpeter Adam Meckler and his quintet, drummer Miguel Hurtado’s group, and saxophonist Max Corcoran’s project perform in the intimate room in Lowertown. FMI and tickets.

For hip-hop, head to Soundset on Sunday. Now in its fifth year, the nationally recognized festival is hosted by Brother Ali, MaLLy and J Pratt. At Canterbury Park in Shakopee. FMI and tickets. Listen to a Soundset 2012 mix here. Not for the kiddies.

The great American writer James Baldwin wrote only two plays. “The Amen Corner” was first, published (in 1954) after the novel “Go Tell It on the Mountain.” Now on the Guthrie’s thrust stage in a Penumbra production directed by Lou Bellamy, it’s a must-see for many reasons. The play is not perfect; it’s long (even though Bellamy squeezed Baldwin’s original three acts into two) and wordy, with too many plot lines. But the staging, the cast and the performances are superb.

Greta Oglesby is a mighty force as Sister Margaret Alexander, pastor of a small church in Harlem, struggling to hold onto her congregation as her personal life unravels. Austene Van is deliciously bitchy as the two-faced, virginal Sister Moore; Dennis Spears is meaner than I’ve ever seen him as Brother Boxer; as Sister Boxer, Thomasina Petrus sings and struts and shines. The main action takes place in the church and the basement apartment where Sister Margaret lives; on either side swirls the street life of Harlem, where children play hand-games, sailors pick up girls, drunks sleep on steps and crooks snatch purses.

There’s a lot happening all the time, and you sometimes wish you could take hold of just one plot thread and pull it out. But it’s remarkable, although it shouldn’t be, that most of the leads are black women who are not shown scrubbing floors or minding white children. Through June 17. FMI and tickets.