Four Twin Cities arts groups have been awarded a total of $1.3 million in grants from ArtPlace “to accelerate creative placemaking.” Announced Tuesday, grants go to Intermedia Arts ($325,000), the Native American Community Development Institute ($435,000), Pillsbury House Theatre ($250,000), and Public Art St. Paul ($300,000). Fifteen Minnesota finalists were named in January; these four emerged as winners. There were 127 finalists nationally. Fifteen out of 127 is not too shabby, Minnesota.

Let’s pause to define “creative placemaking,” a term that’s being tossed around a lot lately, kind of like “paradigm shift” was in the late 1990s. Here’s a jargon-free description from the NEA’s Jason Schupbach: “When you strategically involve arts, culture and creative industries in community development and economic development, that’s creative placemaking. … It might mean creating an arts district to help revitalize a downtown. It might mean adapting older structures to create places where artists can live, work and play. It might mean helping the community engage with public art. It might mean film festivals, media centers, design industry centers. It’s basically about growing the creative economy of a place. It’s also about providing more opportunities for people to have art experiences in their everyday lives.”

Intermedia Arts will use its grant to place four artists-in-residence in the City of Minneapolis Planning Division. (Here’s more on that from Marlys Harris.) The Native American Community Development Institute will turn the Franklin Avenue Light Rail Station into the Anpetu Was’te Cultural Arts Market, with a pedestrian plaza, marketplace for arts and food, and four public art pieces. Similar to Intermedia Arts, Public Art St. Paul will embed artists in the City of St. Paul’s Department of Public Works, Planning, and Parks, where they will help to shape and program public space. (And more on that from Joe Kimball.)

Pillsbury House Theater will work with neighborhood partners to further the development of “Arts on Chicago,” an arts district stretching from 34th Street to 42nd Street. “I’ve loved this neighborhood for the past 17 years,” says Pillsbury House co-director Noel Raymond. “Unfortunately, the true character of the neighborhood is not always reflected in media portrayals or, sometimes, in the physical landscape on Chicago Avenue. ArtPlace will help us bring awareness and transform the physical space, so that the energy and strengths of these neighborhoods are really recognized.” 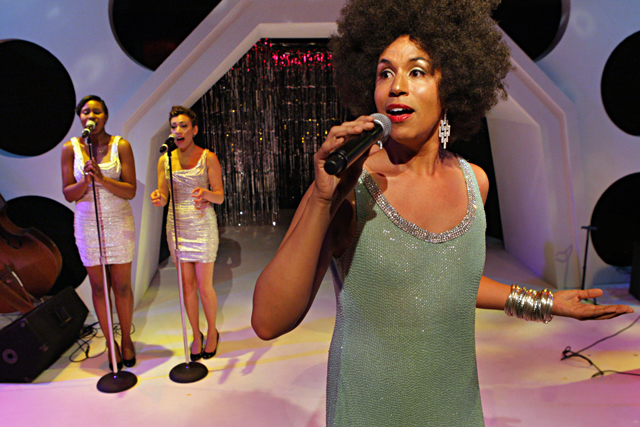 Pillsbury House was already in the news when the ArtPlace grants went public. Its current production, “Jomama Jones: Radiate,” has earned praise from the New Yorker (“great show . . . Just go”) and the New York Times (“ ‘Radiate’ glows”). Created by performance artist Daniel Alexander Jones, “Jomama” is the story of an expat soul singer’s comeback. The show was born on the Pillsbury House stage, moved to Joe’s Pub and Soho Rep in New York City, and has returned for a limited engagement. I happen to know that the exciting young trumpeter John Raymond is here from New York to play in the band. (He’ll be back next month for a weekend at the Artists’ Quarter.) “Jomama Jones: Radiate Live!” continues through Sunday, June 24. FMI and tickets.

The Twin Cities offers a steady supply of professional, polished performances, but it’s enjoyable and illuminating to attend open rehearsals (like the one Zenon Dance held earlier this month) and other behind-the-scenes events. On Saturday evening, Penumbra will host a staged reading of “In Search of Assata” by Ed Bullins, one of America’s most significant playwrights. Bullins’ awards include the Obie, New York Drama Critics Circle Award, Guggenheim Fellowship, and two NEA grants; among his plays are “Clara’s Old Man,” “In the Wine Time,” and “Storyville.”

“In Search of Assata” looks at the life of Assata Shakur, a member of the Black Panther Party who was accused, convicted and imprisoned for the death of a state trooper in 1973. After serving two years, she escaped to Cuba. The reading will be followed by a conversation with the playwright. 7:30 p.m., Penumbra Theater. FMI and tickets. On Sunday at 5 p.m., the Southern Theater presents a free public showing of “Basic North,” the new production by the Ivey-winning, genre-bending troupe Live Action Set that opens June 30. See the work in progress and give feedback after; you may help to shape the show. FMI. Free.

Two very different musicals open tonight (Friday, June 15). At the Guthrie: “Roman Holiday,” a new musical based on the movie starring Audrey Hepburn and Gregory Peck, with music by Cole Porter. A beautiful princess (Stephanie Rothenberg) and a handsome American newspaper reporter (Edward Watts) meet and play in the Eternal City. With 26 singers and dancers and a live orchestra, this is a big production that promises to be fabulously romantic. FMI and tickets. On the Minnesota Centennial Showboat at Harriet Island: “The Vampire!” Two lovers battle ghoulish desire on the windswept moors of Scotland, threatened by shadows of darkness and mysterious powers! Thrilling, haunting, and tuneful! Also family-friendly. Peter Moore directs; Minnesota Opera alum Vern Sutton leads the “olios,” musical interludes from the golden days of vaudeville. Matinees and evening shows through Aug. 25. FMI and tickets. 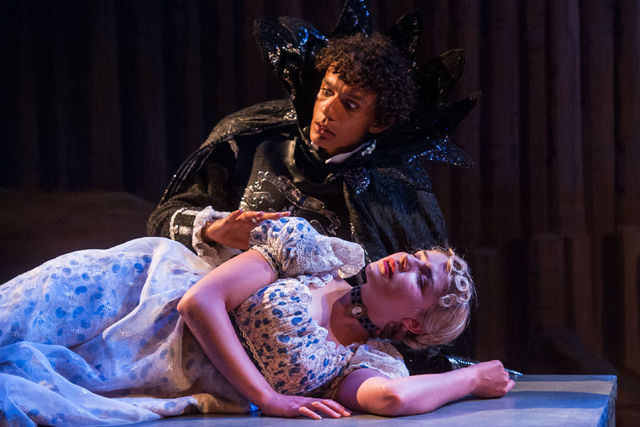 Photo by Mark VancleaveLord Ruthven ( Ryan Colbert) is about to cast his spell over sleeping Lady Margaret (Charlotte Calvert) in Minnesota Centennial Showboat’s THE VAMPIRE! now through August 25.

A weekend of art and music on the Minneapolis riverfront, the 18th annual Stone Arch Bridge Festival starts tonight with a concert featuring Poetry in Motion Dance Company, Romantica, and The Evening Rig and ends Sunday at 7 p.m. With 250 artists and crafters, local bands on three stages, a family art park, a Father’s Day car show, and a food market, it’s a fine tradition in a beautiful location. And free. We wondered if it would continue after the death of founder Ira Heilicher; thanks to new owner Matt Mithun (Somerset Amphitheater, SoundTown music festival) for stepping up and keeping a good thing going.

Sound Unseen, the continuing films-about-music festival, moves to First Ave tonight for the Minnesota premiere of “Girl Walk // All Day,” an interactive screening and dance party. A feature-length dance music video by filmmaker Jacob Krupnick, “Girl Walk” follows three dancers across New York City. Shot entirely in public spaces, funded through Kickstarter, set to the music of “All Day,” the 2010 album by mash-up DJ Gregg Gillis (aka Girl Talk), it was a hit at SXSW earlier this year. Here’s the trailer. I saw a screener and it’s joyous. Amazing young dancers (the rebellious Girl, the elegant Gentleman, the Creep in skeleton sweats) and high-energy dancing in streets, subways, parks, Bloomie’s and Yankee Stadium, on escalators, sidewalks, and the Staten Island ferry. The crowd reactions (which range from NYC indifference to joining in) are interesting to watch, and the language is colorful, so 18+. The film screens twice. The first screening is followed by a dance performance by Mathew Janczewski’s Arena Dances, the second is accompanied by a TBA DJ spinning over it. Doors at 8, show at 9. FMI and tickets.

Filmmakers, the MNTV 2012 Call for Entries is on now. Deadline for submission is next Wednesday, June 20. Curated by the Minnesota Center for Media Arts (IFP MN) and the Walker, MNTV showcases the finest films and videos produced in the state over the past two years. The winners are featured in three one-hour broadcasts on TPT. FMI.

Father’s Day is Sunday and tickets are still available to “Tying the Knot: Songs for Our Fathers” at the Fitz. Curated and hosted by award-winning actor, vocalist and arts educator T. Mychael Rambo, funded in part by legacy money, it’s a celebration of fatherhood in songs, images, stories and dance, with a focus on African-American culture and the voices of black men. Performers include Marion McClinton, Jearlyn Steele, Bruce Henry, Julius Collins, Alexs Pate, Carlyle Brown, Shá Cage, Aimee Bryant, Tonia Hughes-Kendrick and M.anifest. 8 p.m. FMI. Tickets at the Fitzgerald box office until 5 p.m. today (no fees) or Ticketmaster. Earlier on Sunday, a Father’s Day festival and photography exhibit at the Wilder Center includes a performance stage, activities, and an arts-and-crafts workshop with Tacoumba Aiken. Free and open to the public, 11 a.m. – 2 p.m.

Also on Sunday, the vocal ensemble Cantus gives a free concert at the Lake Harriet Band Shell starting at 2 p.m. On the off chance you haven’t heard this local treasure, you can listen to audio tracks and watch videos on their website.

The Line is looking for a publisher. Each Wednesday, this online publication tells the story of the new economy in the Twin Cities in original stories, video and photography. Recent features covered the final Talk-It Hennepin forum, the Grassroots and Groundwork anti-poverty conference, and Project Sweetie Pie, which involves local youth in urban farming in North Minneapolis. The Line is a MinnPost partner; articles from there often appear here.

The SPCO may go part-time, according to an article by Graydon Royce published earlier this week in the Strib. Management seeks to trim annual expenses by $1.5 million, which may mean reducing the number of guaranteed workweeks for most musicians to 20/year. Salaries would shrink. The musicians’ current contract expires June 30; negotiations are underway. Meanwhile, the Minnesota Orchestra is negotiating its new contract, which also calls for cuts. Let’s cross our fingers as we keep in mind that the Philadelphia Orchestra spent the past 14 months haggling over new contracts after filing for Chapter 11 bankruptcy protection in April 2011; the Honolulu and Syracuse symphonies shut down; and Detroit went on strike, returning in mid-2011 after the players agreed to large salary reductions. These days, it’s tough to run an orchestra or belong to one. It seems the art class, like the middle class, may be collapsing – and then a group like ArtPlace decides “Not today.”