Nationally, the MacArthur Fellowships and the Doris Duke Artists Awards are the big guns — MacArthur fellows receive $500,000; Duke artists $225,000 — but here in Minnesota, we love the McKnight Artist Fellowships. Each year, this visionary program founded in 1981 awards $25,000 stipends to individual artists to study, reflect, experiment, explore, and work on new projects.

The 2012-13 McKnight Artist Fellowships for Photographers were announced today by mnartists.org. This year’s fellows are Jenn Ackerman, Teri Fullerton, Jason Pearson and Katherine Turczan. Ackerman takes a documentary approach to her work, getting as close as she can to her subjects, creating raw, intimate and emotional images. Fullerton works primarily in photography and video. Pearson’s photographs have been shown nationally and internationally. Turczan’s work is in the Metropolitan Museum of Art, the Museum of Modern Art and other prominent collections; she earlier received Guggenheim and Fulbright fellowships and teaches at MCAD. Work created during the one-year fellowship period will be presented in public presentation, publication and web portfolio.

Six Minnesota dance artists were named McKnight Fellows last week by Northrop Concerts and Lectures. Winning choreographers are Ananya Chatterjea of Ananya Dance Theatre, Carl Flink of Black Label Movement, and Aparna Ramaswamy and Ranee Ramaswamy of Ragamala Dance. Winning dancers are Taryn Griggs, Ashwini Ramaswamy (daughter of Ranee, sister to Aparna) and Stephen Schroeder. Dancer fellows receive additional funds to commission a choreographer to create a new solo dance to be premiered in fall 2014 at the annual “Solo” event. Also announced: the 2012 and 2013 McKnight International Fellowship, a new residency funding one international choreographer each year to collaborate with Twin Cities dance artists and showcase works-in-progress. For 2012, the $10,000 fellowship goes to Paris-based choreographer John Amselem. For 2013, the award will be shared by Cambodia’s Sophiline Cheam Shapiro and Montreal’s George Stamos. 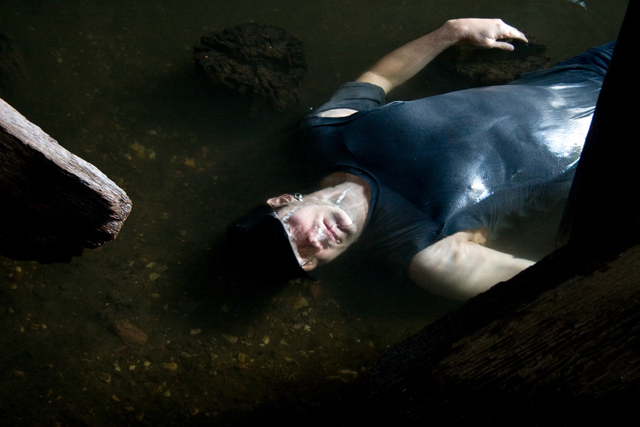 The Minnesota African American Museum and Cultural Center held its first public preview on Saturday, giving people a look at what’s to come when it opens in early fall. Housed in the historic Coe Mansion, a stately brick Queen Anne just south of downtown Minneapolis, MAAM is the first African-American history museum in Minnesota. The mansion, which is listed on the National Register of Historic Places, is currently undergoing renovations. Plans are to restore it for display galleries and build a new cultural center next door. The museum’s first exhibit will be “Bring It Home: Black Baseball in Minnesota.”

The much-buzzed-about opening of Icehouse happens this Thursday, when two of Adam Levy’s bands will perform during dinner and after: Liminal Phase from 7 – 8:30 p.m., Hookers and Blow starting at 10. (A tune by another Levy band, the Honeydogs, was NPR’s Song of the Day on Monday of this week.) Icehouse is in a 100-year-old building at 2528 Nicollet Ave. that has undergone extensive renovations including the addition of a stage. Owners Matthew Bickford and Mike Ryan are serious about presenting live music. Drummer JT Bates is curating a Monday-night jazz series reminiscent of the late lamented Clown Lounge in the basement of the Turf Club. Here’s what we know about that so far: Monday, June 11: the Dave King Trucking Company. June 18: Red Planet. June 25: Fat Kid Wednesdays, the Clown’s former house band. Sets at 9:30 and 11:30. 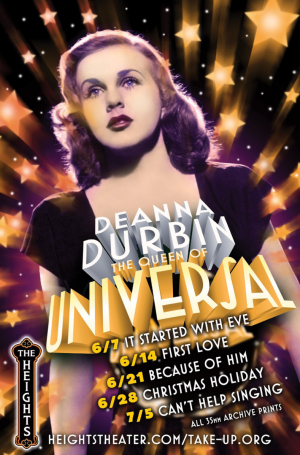 The Heights is hosting a Deanna Durbin Film Festival that begins Thursday with “It Started with Eve” and continues Thursdays through July 5 with “First Love” (June 14), “Because of Him” (June 21), “Christmas Holiday” (June 28), and “Can’t Help Singing” (July 5). Known as “The Queen of Universal,” Durbin was one of the few child stars who made a seamless transition to successful adult actress. In 1948, at the ripe old age of 27, she married French director Charles David, retired from performing and moved to the south of France, where she still lives today (she turned 90 last December). FMI and advance tickets here.

Also on Thursday: MPR hosts “Harmony in the Park,” a free concert featuring VocalEssence, Minnesota Boychoir and One Voice Mixed Chorus. 7 p.m., Minnehaha Falls Park Bandshell. For lovers of choral music, this should be heaven.

MPR’s Marianne Combs shares a poem by St. Paul poet Katrina Vandenberg, who reads from her latest book tonight at Micawber’s Books. “The Alphabet Not Unlike the World” was recently published by Milkweed Editions in Minneapolis. Find another poem by Vandenberg on Micawber’s blog. Vandenberg will read with fiction writer Michael Downs. 7 p.m., free.

Go behind the scenes at the James J. Hill House tonight, when a costumed interpreter from the Minnesota Historical Society leads a 90-minute “Nooks and Crannies” tour. See the back staircases, dust chutes, silver vault, top-floor attic (with theater), coal storage area, and gatehouse overlooking Summit Avenue. I’ve been to the Hill House several times and have always yearned to open another door and peek into another room. 6 p.m., 6:30 p.m and 7 p.m. $8 – $12. Reservations recommended; call 651-297-2555. Group size is limited. If tonight is full, the tour repeats on Tuesdays through Aug. 28.

Another MHS tour worth taking, especially on a sweet summer weekend: the Summit Avenue Walking Tour. Lined with Gilded Age mansions, St. Paul’s Summit Ave. was named one of America’s Great Streets in 2008 by the American Planning Association. Guides talk about the architecture, social history and current preservation issues of the historic neighborhood. Tours start at the James H. Hill House, proceed west on Summit, return via side streets and alleyways, and end outside the Cathedral of St. Paul (right across from the Hill House). 11 a.m. and 2 p.m. Saturdays, 2 p.m. Sundays through Sept. 30. $7-$10. Reservations recommended; call 651-297-2555.

If you’re downtown Minneapolis at noon on Thursday, you’re invited to an open rehearsal of a new work by New York choreographer Faye Driscoll that Zenon Dance Company will premiere during its 30th anniversary season. Driscoll will be present for a brief Q&A. 12 – 1 p.m., Studio 4A, Hennepin Center for the Arts. Free. Be polite and RSVP to danielle@zenondance.org if you plan to go. 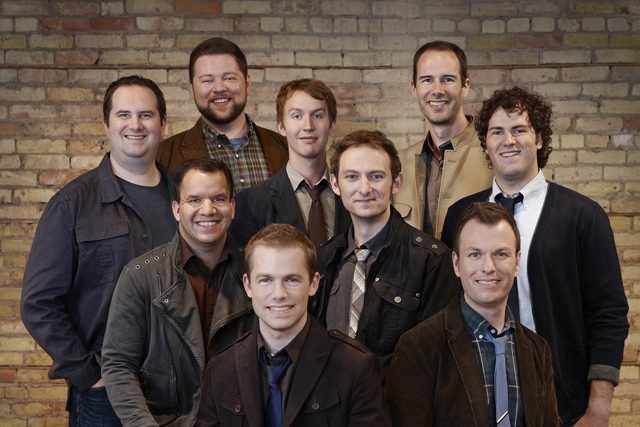 The two final Talk-It Hennepin events take place this Thursday and Saturday at the New Century Theatre. Talk-It Hennepin is a series of conversations aimed at creating and managing a shared, multi-ethnic urban space on Hennepin Ave. If you haven’t noticed, Hennepin Ave. has undergone a transformation over the past several years. Theaters long shuttered have been renovated and reopened for Broadway shows and touring concerts. The traffic is two-way after 30 years of one-way flow that turned the theater district into a pass-through. Rooftop restaurants are open. And yet, parts of Hennepin remain dumpy, discouraging and intimidating, especially for out-of-towners. On Thursday, three creative speakers — cultural geographer and MacArthur Fellow Don Mitchell, Thai Community Development Center founder Chancee Martorell and St. Paul artist Seitu Jones — will bring their ideas and experience to the table. On Saturday, area artists Ta-coumba Aiken, Mankwe Ndosi, Leah Nelson and Harry Waters Jr. will pull the series together by placing concepts generated during previous workshops on a 42-foot model of Hennepin Ave. and defining steps for implementation. Thursday, 7 – 9 p.m.; Saturday, 9:30 a.m. – 12:30 p.m. Both at the New Century Theater, free with RSVP.

For artists and crafters who want to be part of Minneapolis Craft’za on Nov. 17 at the Soap Factory (new from the creators of Craftstravzganza): Vendor applications are due June 16. More precisely: 11:59 p.m. June 16. Go here FMI and a link to download the application.

For songwriters itching to write a Christmas carol: VocalEssence and the American Composers Forum are holding their 15th annual Welcome Christmas Carol Contest – the chance to compose a modern-day carol and, if you win, hear it performed live by the excellent VocalEssence Chorus & Ensemble Singers and broadcast nationally by American Public Media. Two winners each receive a cash prize of $1,000. This year’s mission, if you choose to accept it: a carol for SATB chorus accompanied by concert C flute. Application and guidelines here. Postmark deadline: Aug. 3, 2012. In case you’re wondering (I was), all rights remain with the composers.

Tickets go on sale Friday to “An Evening with Hugh Laurie and the Copper Bottom Band.” Formerly the dim Bertie Wooster in “Jeeves and Wooster,” most recently the cranky Dr. Gregory House in “House,” Laurie is a serious devotee of R&B and the music of New Orleans. We’ve seen him at the keyboard in “House,” but who knew he was such an accomplished pianist and vocalist? Unlike other actors who attempt to cross over into music with humiliating results, Laurie has been well-received. The title of his 2010 release, “Let Them Talk,” hints that he doesn’t really care one way or another; very House-ish. Saturday, Aug. 18, 8 p.m. at the Pantages. FMI and tickets.

Speaking of screen stars making music: Tickets go on sale tomorrow to Kevin Costner and his rock/country band Modern West at the Guthrie. Yes, the devilishly handsome Kevin Costner of “Dances With Wolves,” “Field of Dreams,” “Bull Durham,” “The Bodyguard,” et cetera, and also of the apocalyptic (in more ways than one) “Waterworld.” Here’s a video of the band in live performance. Monday, July 7, 7:30 p.m. FMI and tickets.

Last Wednesday’s Real-Phonic Radio Hour was a perfect example of where music seems to be headed. This live monthly show at the James J. Hill Reference Library in downtown St. Paul isn’t really a radio show, and it lasts longer than an hour, but it is recorded for later listening by anyone who wants to hear it. Thom Middlebrook is the genial host, telling jokes and holding up an APPALLED sign when he wants the audience to applaud. Poets recite poetry and bands play music, a crazy quilt of sounds and styles. The program changes from month to month, but here’s what we heard. First, the Real-Phonic Band led by Erik Koskinen, a kind of country-meets-Dire-Straits ensemble of guitars and drums and cowboy hats. Then hip-hop/spoken word artist Desdamona joined them; for part of her set, Molly Maher sang along. After that, the Honeydogs, masterful crafters of hook-filled songs that blend folk, rock, pop and psychedelic prog. The evening closed with more guitars on stage than I’ve seen since the Grammys. Next up: Pieta Brown.

Katha Dance Theatre’s “In Retrospect: Twenty-Five Years” was both celebration and education. Performed at the O’Shaughnessy last weekend, the program celebrated the company’s quarter-century in the Twin Cities in film clips and selections from its extensive repertoire. It taught us about Kathak dance, an ancient art of North India, and the capacity of dance to span centuries and cultures, no matter how exotic or specific a particular form might seem. Katha has a history of working with other dance companies and artists; we saw that in the clips (Katha with Cambodian dancers, Native American dancers, Japanese dancers) and in the live performances with members of Zoro Flamenco, Ethnic Dance Theater, and the great gospel singer Robert Robinson. We saw how Kathak and Flamenco share poses and gestures; we heard songs about Lord Krishna and traditional spirituals and there was no conflict between them. We became accustomed to the sound of ghunghru — small bells tied around the dancers’ ankles — and the sight of silk skirts flaring like flowers. The colors of the costumes were extraordinarily vivid. I mentioned this to a woman I spoke with after the show. “Go to India,” she said, and laughed.