The Minnesota Opera expects to finish its 2012 fiscal year in the black – for the ninth year in a row. The news was announced by managing director Kevin Ramach at last week’s annual meeting. Ticket revenue reached an all-time high, subscriptions a 10-year high. More than half of the Opera’s performances sold out. Meanwhile, the company appointed its first-ever music director, Michael Christie, and composer Kevin Puts won the Pulitzer for “Silent Night,” a Minnesota Opera commission and world premiere. A welcome contrast to the gloom and doom of many arts orgs’ financial woes.

Ten reasons to see the new Rembrandt show at the Minneapolis Institute of Arts: 1. Because it’s a Rembrandt show. 2. Because it’s the largest collection of Rembrandt paintings ever seen in America. 3. Because it juxtaposes authenticated Rembrandts with non-Rembrandts, and it’s fun and illuminating to decide which are which. (Study the paintings, then read the labels.) 4. Because the labels were written by curator Tom Rassieur, a Rembrandt expert whose descriptions are informative, interesting, and 99.9 percent jargon-free. (Rassieur led last week’s media preview. He promised at the start to take half an hour, then took three times that long, and I followed him around like a happy puppy.) 5. Because people will be talking about this exhibit for years. 6. Because the MIA’s last major Rembrandt show was in 1960 and who knows when we’ll see another. 7. Because many of the paintings are from private collections, including the exquisite “Portrait of a Girl Wearing a Gold-trimmed Cloak,” the show’s “cover girl.” 8. Because one painting is actually for sale. “Portrait of a Man with Arms Akimbo” (Rassieur calls it “John Belushi”) is currently on the market for $47 million. 9. Because a satellite exhibit features 39 Rembrandt prints from the MIA’s collection, and if you’re not arted out after viewing five rooms of paintings, it’s worth a look. 10. Because we always knew our Rembrandt, “Lucretia,” was special, and within the context of so many other Rembrandts, we see how special she really is. Rassieur described her as “one of the great pictures in America regardless of the artist.” Closes Sunday, Sept. 16, which seems like a long time from now but isn’t.

We’re crying over The Onion’s decision to chop The A.V. Club, Twin Cities, its informative, entertaining and irreverent coverage of local entertainment. There’s a lot happening here and we need more coverage, not less, because no one can cover it all no matter how hard we try. 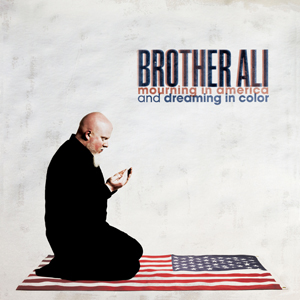 Amid the word of Brother Ali’s arrest at an Occupy Homes demonstration, let’s not forget he’s releasing his fourth studio album on Aug. 21. Created during his self-imposed two-month exile in Seattle, inspired by his first trip to Mecca, the 2011 uprisings in the Middle East, and the worldwide Occupy movements, “Mourning in America and Dreaming in Color” critiques America and its flaws while looking hopefully at its possibilities. Stream “Stop the Press!” here.

Americans for the Arts reports that the U.S. House of Representatives’ initial Fiscal Year 2013 funding legislation calls for a $14 million cut for the National Endowment for the Arts. (Earlier this year, President Obama proposed an increase of $8 million over the current appropriation.) In 2011, a floor amendment that weakened the NEA was defeated by grassroots advocacy. If NEA funding is important to you, here’s a quick and easy to communicate with your members of Congress.

Is the American Swedish Institute at risk of becoming hip and cool? It certainly seems that way. A few days out from the grand opening on Saturday of its new Carl and Leslie Nelson Cultural Center, Stephen Colbert has been invited to tweet for them. (As reported by the Strib’s Kim Ode, the country of Sweden turned down Colbert’s offer to occupy its Twitter account for a week. So ASI president Bruce Karstadt thought Colbert might like to tweet for ASI – for a day.) Minnesota songwriter Jeremy Messersmith was seen on Twitter asking about doing a photo shoot there. A faux goat is touring the new building, and pictures are appearing on Facebook. (ASI is all over social media.) They’re spelling Grand Opening with an umlaut – Öpening – like a heavy metal band. Saturday’s festivities will include ABBA impersonators and an ABBA sing-along. What’s next, parties with DJ Jake Rüdh? Let’s hope so.

The Capri Theater on West Broadway is one of the good guys, a venue that benefits its North Minneapolis neighborhood and consistently presents programming that celebrates black Americans. Owned and operated by the Plymouth Christian Youth Center (PCYC), a nonprofit human services organization, it offers a youth apprentice program that trains students in operating and managing a theater. If you go to a performance at the Capri, some of those students will greet you at the door and welcome you from the stage. First on the list of the theater’s guiding principals: “Youth development with a heavy emphasis on youth engagement.” The campaign to transform the Capri into a beacon for North Minneapolis began five years ago. On Saturday, that milestone will be celebrated with an all-star benefit concert featuring many artists who have performed on its stage in recent years: Dennis Spears, Regina Marie Williams, Thomasina Petrus, Debbie Duncan, Charmin Michelle, the Wolverines Jazz Trio, and Rick Carlson. The concert will be followed by a post-show party. Tickets are $75, of which $50 is tax-deductible. Available here or call 866-811-4111.

See the Constitution before it’s gone. “We the People: The First Official Printing of the U.S. Constitution” closes at the History Center on July 4. The exhibit includes a rare version of the Constitution dated 1789, an even rarer draft of the Bill of Rights (printed in an unbound edition for the exclusive use of Congress, dated Aug. 24, 1789), and the original editions of the two state of Minnesota Constitutions.

Starting June 26 at the History Center: “Minnesota’s Greatest Generation Short Plays,” four plays based on materials from the collections of the Minnesota Historical Society. Themes are popular culture and daily life in the Great Depression, World War II, the life of Stuart Lindman, and television in the 1950s. Plays rotate throughout the week. Tuesdays through Fridays, 4x daily; ends Aug. 17. FMI.

The Whittier Artists in Storefronts will have a second run of exhibits in neighborhood storefront spaces starting July 21. The application deadline for artists is 4 p.m. Monday, July 9. FMI and application.