Were you blue when Heidi Klum bid “Auf Wiedersehen” to Katherine Gerdes, Christopher Straub, Ra’mon-Lawrence Coleman and Danielle Everine? Good news, “Project Runway” fans: there’s another Minnesota designer on season 10. According to Nancy Ngo of the Pi Press, Raul Osorio “is known for his attention to tailoring and striking a balance between feminine and masculine designs. On the local fashion scene, where he has become a fixture, it’s not uncommon to spot him wearing hats, rolled-up pants and ankle boots.” His style icon is Johnny Cash and/but his favorite fabrics are lace and chiffon. Season 10 started last night on Lifetime at 8 p.m. If you missed the first episode, you can catch it next Thursday at 7 p.m.

Opening Friday (July 20) at the Textile Center: “Underneath It All: Desire, power, memory and lingerie.” What is underwear all about? Or, perhaps a better question: What isn’t it about? Curated by Diane Bronstein, featuring work by Bronstein, Ingrid Goldbloom Bloch, Joanne Kaliontzis, Lisa Knox, Amanda N. Simons, and other artists, this new show features edgy interpretations that invite us to ponder gender, body image, sexuality, history, and technology. Opening reception tonight, 7 – 9 p.m. Through Aug. 25. 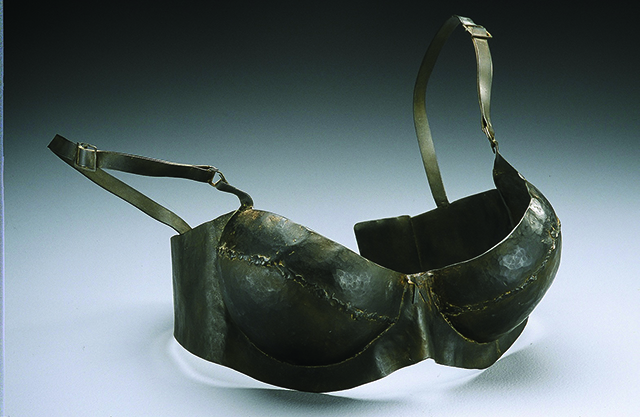 Closing next Saturday (July 28) at the Weinstein Gallery: “Gordon Parks: At 100,” a moving and powerful exhibit of 40 photographs by the internationally acclaimed artist. Many of his best-known images are here: portraits of Muhammad Ali, Duke Ellington, Leonard Bernstein, fashion photographs, Harlem photographs, his “American Gothic” (a cleaning woman with mop and broom before an American flag), Ingrid Bergman in Italy. Born in Kansas, Parks got his first break in St. Paul. This is a rare opportunity to see a cherry-picked, smartly hung selection of indelible images in an intimate south Minneapolis neighborhood setting.

Included in the Library of Congress’ list of “Books That Shaped America,” released earlier this month: St. Paul native F. Scott Fitzgerald’s “The Great Gatsby.” This list would make a fine starting point for a series of discussions/arguments/fistfights in your book group. Although Librarian of Congress James H. Billington says quite clearly that “this list is a starting point” and “not a register of the ‘best’ American books,” it is already raising the ire of those whose favorites were left out. If you’re planning a trip to Washington, D.C., you can see the exhibition.

The Red Stag has announced the line-up for its annual block party: Jack Klatt & The Cat Swingers with Dakota Dave Hull, Chastity Brown, Mayda, The Honeydogs, Kill the Vultures, Rogue Valley, All Tomorrow’s Petty, MC Foxy Tann, and Heart of the Beast Puppet & Mask Theater. This being the Red Stag, it’s a zero-waste event, with organic foods and Schells beer. Sunday, Aug. 5, 3:30 p.m., rain or shine. 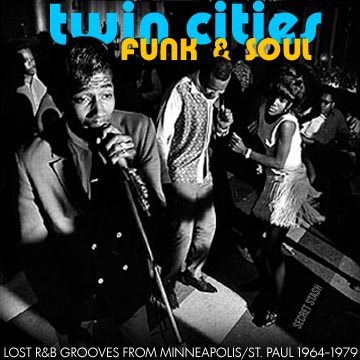 Even before Prince, Minnesota’s music scene was funky. In September, local label Secret Stash Records releases “Twin Cities Funk & Soul: Lost R&B Grooves from Minneapolis/St. Paul 1964-1979,” with historic cuts by Maurice McKinnies, Wanda Davis and Jackie Harris, Prophets of Peace, Willie and the Bees, Wee Willie Walker, the Valdons, and more. This lucky writer is listening right now to an advance copy. ’Scuse me while I dance on my desk. On Sunday, Sept. 22, the Cedar hosts an album release party featuring many of the performers heard on the recording. Because it’s the Cedar, because it’s live, because it’s Minneapolis, I doubt this will be anything like those creaky PBS nostalgia-music pledge-drive specials. FMI and tickets.

The Cowles Center has unveiled its October menu of events. The Minnesota Dance Theatre launches its next half-century with “The Enchantment: 12 Dancing Princesses,” based on the fairy tale by the brothers Grimm (Oct. 5-7, 12-13). The SAGE Awards for Dance celebrate Minnesota’s dance community (Oct. 17). Internationally renowned Alarmél Valli, the greatest living master of Bharatanatyam, the classical dance form of south India, performs on one night only (Oct. 20). The men’s vocal ensemble Cantus presents “When Twilight Falls” (Oct. 25), and the James Sewell Ballet closes out the month (Oct. 26-28).

In 2005, Nancy Harms was teaching elementary school in Milaca. In 2006, she arrived in the Twin Cities, determined to be a jazz singer. In 2009, she recorded and released her debut CD, “In the Indigo.” In 2010, she moved to New York, where she has been carving out a career: singing in clubs, meeting the right people, trying new things, polishing her remarkable instrument. She returns often to visit and perform, most recently in May with her “Double Bass, Double Voice” project (with vocalist Emily Braden and bassist Steve Whipple). She’s back this weekend with something brand-new: the Minnesota release of pianist/composer Jeremy Siskind’s latest CD, “Finger-Songwriter,” a collection of personal, confessional, emotional songs with words by Jack Kerouac, Henry Wadsworth Longfellow, Jorge Luis Borges, Seamus Heaney, Wallace Stevens, and others. With Siskind on piano, Harms on voice, and Lucas Pino on saxophones, it’s one of the most remarkable recordings I’ve heard in a very long time. The trio performs on Saturday at Jazz Central. 8:30 p.m.

When composer/pianist George Maurer was a college freshman pondering life’s big questions, his German professor gave him a copy of Rainer Maria Rilke’s “Letters to a Young Poet.” Maurer has since set 13 of Rilke’s poems to music and traveled to Prague, Rilke’s birthplace, for atmosphere and inspiration. Recently he learned that Tennessee Williams also discovered Rilke in college and later worked some of the poet’s themes into his plays. In collaboration with director Jef Hall-Flavin, Maurer has created a new theatrical production that imagines a conversation between Rilke and Williams. Featuring vocalists Dieter Bierbrauer and Jared Oxborough, “Autumn Song” includes selections from Maurer’s ever-expanding Rilke cycle and new compositions based on poems by Williams. On Monday, it has its world premiere at St. Joan of Arc Church. In September, it travels to the annual Tennessee Williams Fest in Provincetown. Doors at 6:45 p.m., performance at 7:30. FMI and tickets. 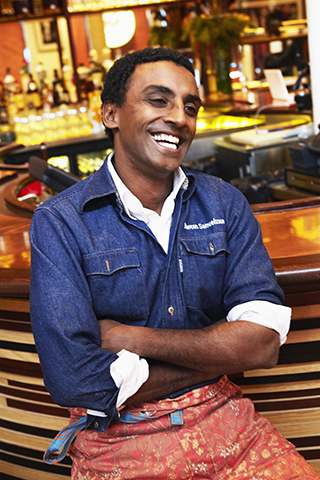 Remember Aquavit, the early-2000s upscale Swedish restaurant in the IDS center that introduced Minnesotans to foam? (Back then, we didn’t like it one bit.) Wunderkind chef Marcus Samuelsson went on to bigger and better things including a James Beard Award, “Top Chef,” the “Today Show,” and the famous Red Rooster in Harlem, NY. He’ll be back in the Twin Cities on Tuesday, giving a brief presentation and signing copies of his new memoir, “Yes, Chef,” in the new Nelson Center at the American Swedish Institute starting at 2 p.m. Later that day he travels to Cooks of Crocus Hill in St. Paul for a 5:30 book signing and a cooking demonstration. Sorry, all that’s left for the demo is the wait list. Here’s Lee Svitak Dean’s interview for the Strib.

Single tickets go on sale at 11 a.m. Monday to all Schubert Club concerts, including the International Artist Series, including the 130th Anniversary concert with Jessye Norman on April 30. Online or by phone at 651-292-3268.

At first, I was dubious about the Guthrie’s “Roman Holiday.” Why turn a flawless, iconic 1953 movie into a musical? Five minutes in, I was won over. 1. Someone came up with the ingenious plan to borrow songs by Cole Porter instead of penning new tunes, thereby guaranteeing well-crafted melodies and witty lyrics that (mostly) fit the (tweaked) story. 2. As Princess Anne, Stephanie Rothenberg has a gorgeous voice and is cute as a button, especially when she gets her Hepburnesque haircut. 3. As Joe Bradley, handsome baritone Edward Watts is every inch a leading man, with bonus inches; he stands at least a head taller than anyone else in the cast. 4. As Francesca, the Italian nightclub singer, Christina Baldwin is steamy and funny; her performance of “Just One of Those Things” is a high point. 5. Todd Rosenthal’s sets are a seamless, shifting blend of film and structures that slide, glide, rise and fall. Especially dazzling: the moment when an image of the Trevi Fountain is replaced by a three-dimensional fountain. 6. The large ensemble cast of singers and dancers fills the stage with high energy and precision movements. 7. It’s an effervescent entertainment with a beating heart, and so romantic. I knew going in how the story ends but I still teared up a little. “Roman Holiday” is a Guthrie premiere. Will it move from here to even brighter Broadway lights? It could use a trim, like Princess Anne’s hair. The second act is just right, but the first is at least 15 minutes too long. Through Aug. 19 on the proscenium stage. FMI and tickets.