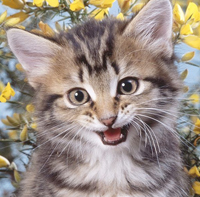 Forget Rock the Garden and River’s Edge. Never mind Kenny Chesney and Tim McGraw at Target Field. Summer’s biggest event may turn out to be an hour’s worth of cat videos on the Walker’s Open Field. Posted on the Walker’s blog in late May, news of the Internet Cat Video Film Festival planned for late August has gone viral, leaving virtual cat hair all over Gawker.com, the L.A. Times, NPR and the BBC. Between now and July 30, you can nominate your favorite cat videos for consideration. Here’s mine. 9 p.m. Thursday, Aug. 30. Say cheezburger.

Has this summer already seen too many music festivals? On Tuesday, the Minnesota Orchestra’s “Big Gig,” slated for this Sunday, was canceled. On Wednesday, so was SoundTown, scheduled for July 26-28. Lilly Schwartz, the Orchestra’s director of pops and special projects, cites “low ticket sales . . . due to an oversaturation of similar festivals in the market this summer” as the reason for Big Gig’s demise. But she vows to “still pursue this kind of project in future, especially since the expansion of Orchestra Hall will offer new opportunities.” Big Gig had other problems, including high ticket prices ($35/$40) and location, location: the Ted Mann, which seems out of the way to people used to the hall on the Mall. SoundTown’s Matt Mithun also blamed low ticket sales.

No worries about Barbette’s annual Bastille Day Block Party on Sunday. Now in its tenth year, this free and festive all-ages event features live music by Astronautalis, A. Wolf and Her Claws, the Brass Messengers, Patty and the Buttons, MC Foxy Tann, Sleep Study, Prissy Clerks, and Peter Wolf Crier, plus giant puppets, skateboarders, dancers, jugglers, a fire circus, beer, and a wine-spitting contest. Some 2,500 fans of liberté, égalité, and a good time outdoors are expected. Proceeds benefit People Serving People, the emergency shelter for homeless families. Starts at 3 p.m. rain or shine.

The Minnesota Museum of American Art is on a roll. Having recently found a home in the Pioneer-Endicott Building in downtown St. Paul, it just won a $150,000 National Endowment for the Arts grant to support the planning and pre-design phase of the new space, the NEA announced yesterday. MMAA is one of 80 recipients of the 2012 “Our Town” grants, which support creative placemaking projects nationally. Side note: “Our Town” funding for 2011 totaled $6.575 million; for 2012, it’s $4.995 million. 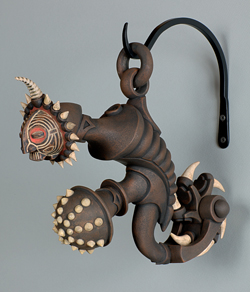 Opening tonight at the Guthrie: Neil Simon’s “The Sunshine Boys” starring Raye Birk and Peter Michael Goetz. The lights on the LED masts should shine especially brightly for these two, who have appeared in more than 100 Guthrie productions (combined), numerous television programs and movies. This will be their first time on stage together. Birk and Goetz are Al Lewis and Willie Clark, a famous (and famously argumentative) vaudeville act persuaded to reunite for a CBS comedy special. Greta Oglesby has a supporting role as Registered Nurse; Gary Gisselman directs. On the thrust stage. FMI and tickets. 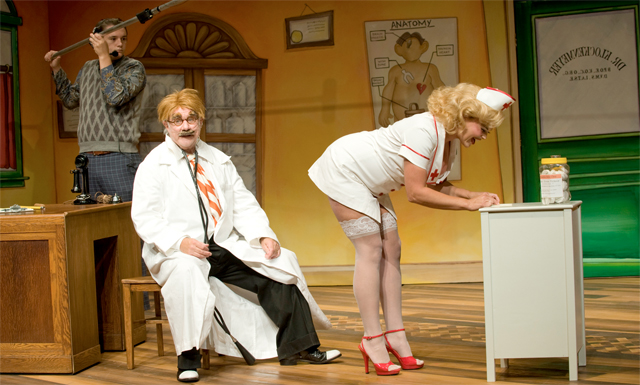 Photo by Michael BrosilowPeter Michael Goetz as Willie Clark and Jennifer Maren as Sketch Nurse in the Guthrie Theater’s production of “The Sunshine Boys.”

Art at St. Kate’s, a juried local art fair, returns to St. Paul this Saturday from 10 a.m. until 5 p.m. Spread out on the green triangle lawn of St. Catherine University, it’s a lovely way to spend a few hours. Check out the arts and crafts, chat with the artists, maybe pick up something for yourself or shop for gifts. The quality of the work is high and the number of artists (100) is not overwhelming.

Can you sing, dance, juggle, and/or play an instrument really, really well? The State Fair Amateur Talent Contest is celebrating 40 years of showcasing brave and gifted Minnesotans. This year’s competition dangles an especially fat prize: a $10,000 cash award for the big winner, plus a year’s worth of Jack Link’s Jerky and a golden Sasquatch trophy. Auditions run Monday, July 23 through Sunday, July 29 at the Leinie Lodge Bandshell on the fairgrounds, starting at 5:30 p.m. on weekdays and 11 a.m. on weekends; the public is invited to attend. FMI and application.

For more than 40 years, a group of Plymouth Church women calling themselves the Needlers have gathered to patiently stitch, stitch, stitch a series of four large (16 x 25 foot) embroideries for the church’s Guild Hall. Designed by the late Pauline Baynes, an English illustrator best known for her work on C.S. Lewis’ “Chronicles of Narnia,” the embroideries have seasonal and historical themes. The fourth and final work, “Summer of the First Amendment,” will be unveiled and dedicated this Sunday after the morning worship service (with James Gertmenian preaching). The ceremony will feature a newly commissioned work of music by Minneapolis-based composer David Evan Thomas, a McKnight fellow and former composer-in-residence for the Schubert Club. Thomas’ inspiration and text was FDR’s famous “Four Freedoms” speech, the 1941 State of the Union address. “Since it’s a speech with gravitas,” Thomas told MinnPost, “the challenge was to find a tone that conveyed that as well as sang.” Performed by soprano, alto, tenor and bass with piano accompaniment, the four-minute piece is “noble, festive – not rousing, exactly, but stirring. One hopes, anyway.” Worship at 10:30 a.m., dedication/unveiling around 11:45 a.m. 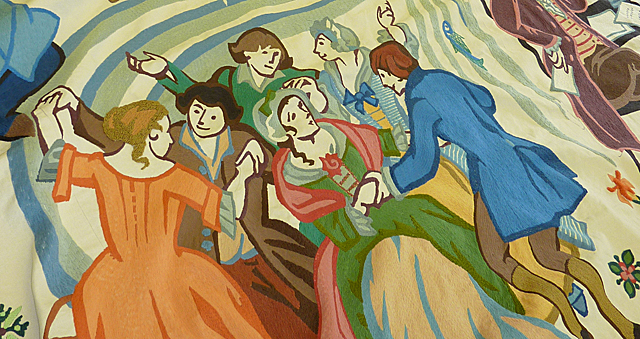 Photo by Allison Campbell JensenDetail of “Summer of the First Amendment”

Over at MPR, Bob Collins is wondering out loud if John Moe is “the next Garrison Keillor.” With Keillor hinting at retiring, David Brancaccio taking over for Moe at “Marketplace Tech Report,” and Moe having two years of MPR’s popular “Wits” under his belt, it’s a reasonable speculation. After Collins posted his article, one 30-something sustaining member commented, “Wits instead of PHC? That would be awesome.” On Wednesday morning, American Public Media senior VP and general manager Judy McAlpine seemed to nix the idea. But Keillor won’t be around forever, and he probably can’t be replaced; Noah Adams’ “Good Evening” didn’t last a year. I suppose that means we should all stay tuned but go on about our lives.

Earlier this week we spoke with John Raymond, a young jazz trumpeter formerly of the Twin Cities who is seeking and finding his fortune in New York City. His first full-length studio CD, “Strength and Song,” came out in February to thumbs-up reviews. Nate Chinen, a respected and influential jazz writer for the New York Times, has given him a couple of nods in his column. Raymond has played at Smalls, the 55 Bar, and the Cornelia Street Café; in September he’s booked for a week of after-hours gigs at Dizzy’s Club Coca Cola, part of Jazz at Lincoln Center; the following week he’ll perform at the prestigious Festival of New Trumpet Music led by Dave Douglas. But he’s especially pleased to be at the Artists’ Quarter in St. Paul this Friday and Saturday. “I’ve been trying to get in there for a long time,” Raymond says, “and it feels really good to be doing a weekend. I get how much of an honor it is. It’s the only real jazz club in the Twin Cities now, and that means a lot. I’d love that to be a new home base for me.” Joining Raymond at the AQ are Vinnie Rose on guitar, Bryan Nichols on piano, Jeremy Boettcher on bass, and Miguel Hurtado on drums. 9 p.m. both nights.

More than a few jazz and music fans will likely head back to the AQ on Sunday, when friends, former students, and family gather to honor drummer’s drummer Elliot Fine, who died on May 4 at the age of 86. Fine spent 41 years with the Minnesota Orchestra and made many lasting contributions to the art of drumming. There will be music, tributes, and ample evidence of Fine’s powerful influence as a teacher and mentor. Here’s a remembrance of Fine by McNally Smith faculty member David Stanoch. 7 p.m.