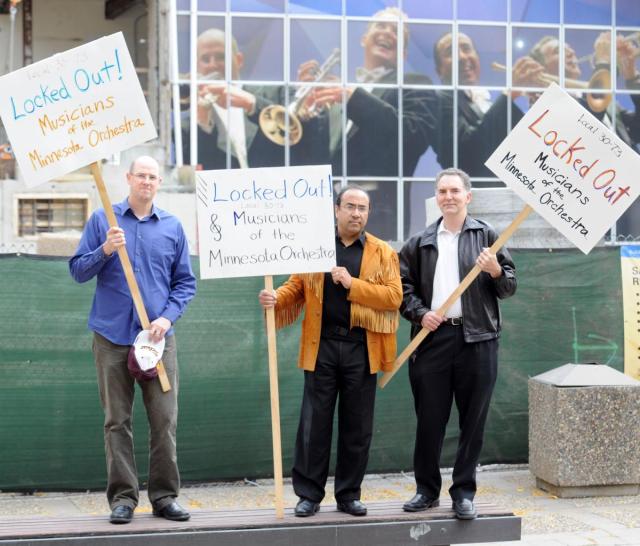 MinnPost photo by Craig LassigAs pressure mounts to resolve the Twin Cities’ twin orchestra lockouts, musicians of both orchestras keep playing under their own power.

Conversation is heating up around the lockout of the Minnesota Orchestra’s musicians. On the Wednesday before Thanksgiving, MinnPost published a Community Voices piece titled “We’re locked out, too: Questions for MN Orchestra management” by prominent Minnesota Orchestra donors Paula and Cy DeCosse. In Monday’s Strib, Graydon Royce reported on the “tightrope” the orchestra’s board has walked for four years “between managing public perceptions about its financial health and making its case to cut musicians’ salaries. … The board chose to cover operating deficits in 2009 and 2010 [during its capital campaign to remodel Orchestra Hall] with major withdrawals from its investments. Then, in 2011 – on the cusp of labor negotiations with musicians – it ‘drew down’ less money and declared a $2.9 million deficit.” At a press conference on Monday, the musicians questioned management’s financial decisions.

UPDATE: On Tuesday the musicians of the Minnesota Orchestra issued a unanimous “no confidence” vote in Minnesota Orchestral Association President and CEO Michael Henson. Stating that “Henson is the major obstacle between the Musicians and the Board of Directors working out a new contract,” the musicians characterized their relationship with Henson as “dysfunctional and adversarial.” They claimed that Henson misled the Minnesota Legislature about the orchestra’s finances; that he changed the orchestra’s mission statement without including musicians in the process; that he has not acted in the transparent manner expected of Minnesota cultural and civic institutions; that he failed to take advantage of the artistic recognition of music director Osmo Vänskä and the musicians to grow the local audience; that the endowment fund has not grown since Henson’s tenure began; and that Henson has jeopardized future recording and international tours by locking out the musicians when the orchestra’s artistic reputation is at its highest point. The musicians also pointed to Monday’s Star Tribune story about management’s strategy to show balanced budgets when requesting bonding funds and deficits during labor negotiations.

An editorial in Sunday’s Strib urged both sides in the dispute to heed the recent letter from Vänskä to sit down and talk together. “The increasingly bitter labor dispute has reached a critical point. … Clearly, one of Minneapolis-St. Paul’s most treasured cultural assets is at risk.” The Strib called for the players to make a counteroffer and ended with this question: “How long can our own city [sic] afford to support and operate two separate classical orchestras while maintaining the excellence of each?” This is not the first time we’ve heard the suggestion, veiled or otherwise, that the Minnesota Orchestra and the SPCO be combined.

The locked-out musicians of both orchestras keep playing under their own power. The holiday concerts by the Musicians of the Minnesota Orchestra scheduled for Saturday and Sunday, Dec. 15 and 16, led by Edo de Waart and featuring Jorja Fleezanis, have sold out; standing room may still be available. Call 612-624-2345. In addition to the previously announced all-Mozart benefit concert (Sunday, Dec. 2), the Musicians of the Saint Paul Chamber Orchestra and the Minnesota Chorale will perform Handel’s ‘Messiah’ on Dec. 20 and 21 at Minneapolis’ Central Lutheran Church. Hugh Wolff, the SPCO’s principal conductor and music director from 1988-2000, will return to conduct the concert. Guests soloists are Karin Wolverton, Victoria Vargas, Brad Benoit and Richard Ollarsaba. Tickets to the SPCO concerts here and here. Courtesy of the Minnesota Historical Society
Moon rock and Minnesota flag from the Apollo 17 mission.

We sent men to the moon, for Pete’s sake. Can’t we resolve our own orchestra crises? Probably not by Wednesday, when moon rocks from the 1969 Apollo 11 mission (small fragments encased in acrylic) will be transferred from the Minnesota National Guard to the Minnesota Historical Society. Found in a storage area at the Veterans Service Building in St. Paul, the Apollo 11 rocks will be displayed next year in a New Acquisitions exhibit at the James J. Hill House. The Historical Society already has a rock from the 1972 Apollo 17 mission. Interestingly, most of the moon rocks brought back to Earth by both missions are currently unaccounted for. Hundreds were given to foreign countries by the Nixon administration; many have since been lost or stolen.

The History Center held its first-ever Black Friday promotion this year, and while it wasn’t Wal-Mart (thank goodness), it was a big hit. Early birds started lining up just after 4 a.m. Doors opened at 6, and by 6:30 a.m., more than 600 people were inside the museum enjoying coffee, donuts, and the new, very kid-friendly “Then Now Wow” exhibit. By 9 a.m., there were 1,700 visitors.

It’s a stellar time for dance in the Twin Cities. TU Dance earned raves for its ninth season, seen at the O’Shaughnessy earlier this month. The visiting company Hofesh Schechter, part of the Northrop Moves dance season, gave an exhilarating and disturbing performance at the Orpheum the week before. (Some images from that night are permanently seared onto my brain.) Celebrating its 30th year, Zenon presented two weekends of premieres and favorites from its repertory at the Cowles. Mariusz Olszewski’s new “Tango” is deliciously sexy, as are the costumes, designed by the choreographer.

On the Saturday after Thanksgiving, the Walker hosted the 40th anniversary of the Choreographers’ Evening, an annual celebration of area dance. Curators Aparna Ramaswamy and Patrick Scully programmed an evening that spanned four decades of movement and creativity, beginning with Voice of Culture’s homage to African Drum and Dance in the Twin Cities and ending with hip-hop dancers from Christ UP Dance Crew. In between, Luke Olson-Elm’s “Without these Qualities (all will be lost)” was a profoundly moving call for kindness and gentleness; Rosy Simas’ “I want it to be raining and the window to be open” paired dancers Dustin Haug and Timmy Wagner in a powerful male pas de deux of contact improvisation. Keeping up with dance in our towns is a full-time job. Here’s a resource we’ve found helpful: the weekly “Dance Community News” from dancemn.org, an artist-driven/artist-supporting organization of 9×22 Dance/Lab and Springboard for the Arts. Take a look at the current issue here. Sign up for your free subscription here.

On the national arts front, Rocco Landesman has announced that he plans to step down as chair of the National Endowment for the Arts at the end of the calendar year. A Tony-winning Broadway producer, Landesman was appointed to the post by President Obama in 2009. His legacy will likely be viewed as mixed. On the one hand, he created the Our Town and ArtPlace programs that benefited local communities including ours; earlier this year, the Minnesota Museum of Art received a $150,000 Our Town grant, and several Twin Cities organizations including the Chicago Avenue Arts District and Public Art Saint Paul received ArtPlace grants. On the other, he ruffled feathers when he declared during a 2011 theater conference that the U.S. has too many theaters, and the NEA Jazz Masters program almost died during his tenure. Jazz would have been absorbed into a proposed American Artists of the Year program, a messy pile of pretty much everything arts. The US House Appropriations Committee subsequently nixed the American Artists and kept the Jazz Masters. Landesman was last in the Twin Cities in June, when he spoke at a party for McKnight artists.

Earlier this month, we spoke briefly with Sheila Smith, executive director of Minnesota Citizens for the Arts, about the Minnesota election and what the results might signify for the arts in our state. More news on that from a recent MCA newsletter: new Senate Majority Leader Tom Bakk and House Speaker Paul Thissen are both well-known arts supporters. In the House, arts-friendly Chair Dean Urdahl has been replaced by arts-friendly Phyllis Kahn. Senator Dick Cohen of St. Paul, a man MCA calls “our most enduring arts friend,” has been elected to head the Senate Finance Committee. Memberships of committees that oversee arts funding are still TBA. One third of the Legislature will be new, and MCA is gearing up to do some educating on the importance of arts funding. They might bring along copies of Kevin Duchschere’s article from Sunday’s Strib about how supporting the arts benefits communities. Duchschere focuses specifically on St. Paul and its thriving Lowertown.

Tonight at Once Upon a Crime: a reception and signing, with refreshments, for Mary Lou Kirwin (a.k.a. Mary Logue) and her new book, “Killer Librarian.” Champion of the mystery section at a small-town Minnesota library, Karen Nash is about to embark on a dream trip to London when her boyfriend dumps her. Library science meets the art of murder in the land of Agatha Christie, Dorothy Sayers and Elizabeth Peters. 7 p.m., free.

Tonight at Macalester: a screening of the new public television documentary “University Avenue: One street, a thousand dreams.” Peter B. Myers’ film explores the colorful history of this major thoroughfare from the 1880s to the present day. Penumbra Theatre’s Lou Bellamy narrates. The 60-min. film will be broadcast on tpt 2 sometime in the future. 7 p.m., free. John B. Davis Lecture Hall, Ruth Stricker Dayton Campus Center, 1600 Grand Ave., St. Paul. Buzz about orchestra lockouts is heating up