Part 3 in a series

When the St. Paul Chamber Orchestra musicians’ contract ended in September, the orchestra kept “talking and playing,” until the musicians were locked out by management in late October. Alicia McQuerrey, 36, an SPCO flutist since 2001, describes what it’s been like for her and her young daughter:

October 22 was our lockout date. I’m definitely scared about the financial end of things. I bought a house on the east side of St. Paul in April 2005, and I’m a single parent of a 15-month-old daughter. Her name is Lola. I had Lola using a donor and in vitro because I was getting older and have been single for years now. I’m the only one taking care of her.

With the lockout, I have a lot more time with Lola. When we were working, she was at a wonderful day-care center in downtown St. Paul, and she had just gotten settled in. I had to pull her out to save the money. I love being with her all day, but was sad to take her away from her friends and teachers.

Before the lockout, I told my mom, “I wish I could be with Lola more.” I should have clarified: “I’d like to be with Lola more, but still have a job.” I didn’t go in-depth enough with that wish.

Not playing with other people is hard. All of us are still practicing like we would by ourselves, but it’s a really odd transition, going from such in-depth interaction with other great musicians to what I would almost call seclusion. I miss my colleagues like family members. We’re together almost every day for many weeks of the year, doing work so personal that you really are bonded together. Wonderful subs can come in and play with us, but it’s not the same. With even one person different in our group, we all feel it. 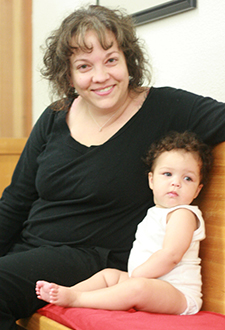 Most of the time we have Saturday mornings off, but there are several weekends of the year when we do either family concerts or Xplorchestra events for younger children, to introduce them to the families of instruments and talk about how they work. Then we have a concert at 8 p.m. Saturday night. We have 16 Sunday-afternoon concerts each year, and those are at 2 o’clock. So we’re performing or rehearsing, or both, six days a week.

I took a loan from my retirement fund in case the lockout happened. We collect unemployment, which has been a great help. Once unemployment stops after 26 weeks, I can probably go three or four months. With our training being so specific, it doesn’t translate very easily into other fields.

Lucky for me, I have a busy 15-month-old, so I don’t have a lot of time to sit around and dwell. But when she’s sleeping, I think, “What are we going to do? Where can I go to play flute? What other jobs would I be qualified for?” I’ve played flute since I was 7. I’ve known since I was 13 that I wanted to be a professional flute player. What can I do that would still allow me to be a flute player and make enough to support my family?

Sunday: Voting amendment defeat: ‘When they announced it, I was like, Yes! Justice prevails’

SPCO musicians locked out: ‘We want to stay here, and we want to play’