The departure of a classical musician from one orchestra for another wouldn’t normally be big news except in small circles. But these aren’t normal times, and when the musician has been locked out from his regular job since Oct. 21, the announcement that he has taken a new position carries special weight.

Late Wednesday afternoon, the musicians of the SPCO sent out a press release saying that principal second violinist Kyu-Young Kim had won a position with the New York Philharmonic in its most recent audition held Saturday, Feb. 16.

“While I am thrilled at this opportunity to play with one of the world’s great orchestras,” Kim said, “I am saddened to be leaving the SPCO under these circumstances. In the space of four months, the lockouts of both orchestras have changed the Twin Cities from a destination metropolis for musicians to a place that many of us are actively trying to leave.”

Carol Mason Smith, chair of the Musicians Negotiations Committee, added, “We’ve said repeatedly to management that we will not be able to recruit or retain the talent that this orchestra needs to remain world class, and this is just a textbook example of that.”

Kim’s leaving is a double whammy for the Twin Cities musical landscape, since he is also a member of the chamber group Accordo. It could be a triple whammy if Kim’s wife, Pitnarry Shin, leaves her position as a cellist with the Minnesota Orchestra.

Kim was associate concertmaster of the SPCO from 2000-05; Shin played with the Minnesota Orchestra from 2001-06. They returned to the Twin Cities in the fall of 2011. “The last thing we wanted to do was displace our family again so soon after moving here, but this is the reality of the lockouts,” Kim said in the press release.

On a more savory note, the James Beard Foundation has found a lot to like in Twin Cities restaurants, bars and chefs. The nine-page list of semifinalists for the 2013 James Beard Awards includes 14 from Minneapolis and one from St. Paul. Butcher & the Boar is on the list of Best New Restaurants; La Belle Vie’s Tim McKee is an Outstanding Chef; Lucia’s is an Outstanding Restaurant; Tilia’s Steven Brown is a Best Chef: Midwest; Tim McKee is a Best Chef: Mid-Atlantic; and here’s where we start to think — this is the appetizer list, but when do we get to the main dish, the actual winners? Not until after the soup course, the March 18 announcement of the nominees. Then we wait until May for the awards. This dragged-out meal is a bit like the brunch we had Sunday at a restaurant we won’t name.

Weren’t we just talking about St. Paul artist Ta-coumba T. Aiken? Yes, in connection with his Guinness-Record-setting Lite Brite mural at St. Paul’s Union Depot. It seems St. Paul is Ta-coumba’s town. On Thursday, Feb. 28, tpt’s “MN Original” and the Minnesota Humanities Center will host “An Evening with Ta-coumba T. Aiken: Celebrating Our Similarities and Differences.” You’ll leave with a piece of art you created during the event, in community and in conversation with Aiken. You’ll also receive a DVD copy of “MN Original” episode #220 featuring Aiken and the educator guides created to go along with it. Open to the public; $10 fee; register here. The Minnesota Humanities Center is at 987 E. Ivy Ave. in St. Paul.

Artists: Northern Spark 2013 has issued an Open Call for Projects. You’re invited to propose a project in any medium that is sited and performed in public space, at Union Depot, or at a venue within Northern Spark’s footprint in St. Paul’s Lowertown. Think mobile/pop-up, participatory, accessible, crowded, nighttime. Application deadline: midnight March 4. FMI. The American Swedish Institute plans to feature part of its collection of Swedish glass (the largest in North America) in the all-night festival and has issued an Open Call for an artist or group to serve as installer, presenting the glass in a new, exciting and immersive way. Application deadline: March 15. FMI. All projects have stipends attached. 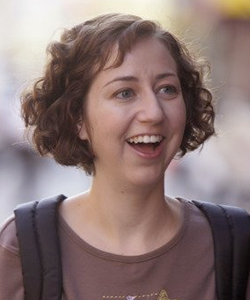 Jane Austen fans, rejoice. The Guthrie will close its 50th season with “Pride and Prejudice.”  This is the 200th anniversary of the novel’s publication, and no matter how many versions you’ve seen (films, plays, “Masterpiece Theatre” miniseries), you know you’ll want to hear those delicious words spoken out loud. The comedy “Born Yesterday,” originally announced as the season finale, has been bumped to 2013-14.  July 12-Aug. 31.

Following up on the success of “Aida” at the Pantages, Hennepin Theatre Trust and Theater Latté Da will collaborate again on “Cabaret” in January 2014. This will be their second production for Broadway Re-Imagined, a new partnership that builds on the two organizations’ success with “All Is Calm: The Christmas Truce of 1914,” which has become a Twin Cities holiday tradition. Like “Aida,” “Cabaret” will star Twin Cities talent.

Because of popular demand and because it’s still so freaking cold, the Ice Castle at the Mall of America (more than 40 feet tall, covering two acres) will remain open until the weather closes it down. (The original end date was Feb. 20.) So far, more than 75,000 people have visited this successful attraction in MOA’s north parking lot. This weekend’s entertainment includes fire dancers and ice princesses. Eleven couples were married there simultaneously on Valentine’s Day (“We do!”). The Minnesota Opera recently held a photo shoot in its frozen corridors for “Hamlet,” which opens March 2. We hear that stars Brian Mulligan (the Prince of Denmark) and Marie-Eve Munger (the doomed Ophelia) were very good sports and the photos prove it. FMI and tickets. 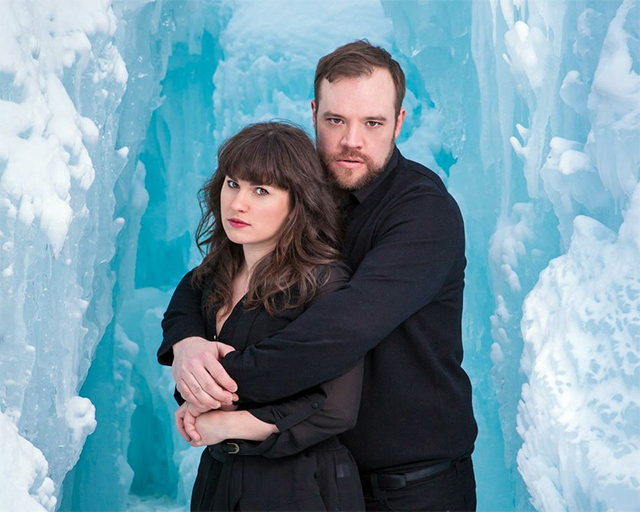 Where to go, what to see

• Saturday (Feb. 23): Altered Esthetics, a nonprofit community-based art gallery and arts advocacy organization, hosts a performance by a quartet of locked-out Minnesota Orchestra musicians led by assistant concertmaster Stephanie Arado. If you want, bring a picnic basket and chew with your mouth closed while you listen. The music starts at 4:30. Suggested donation: $10 per person. The money is a direct financial contribution to the musicians, to be used for concert productions, educational and service-oriented projects, and an emergency relief fund.
• Sunday (Feb. 24): Free! “Portrait of Billie Holiday.” The Twin Cities Seven and vocalist Charmin Michelle highlight the legendary singer’s life and music. Presented by the First Unitarian Society of Minneapolis as part of Black History Month. 2 p.m., 900 Mount Curve Ave., Minneapolis. 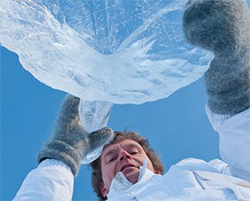 • Monday (Feb. 25): “Ice Music.” This is the coolest concert of the season, and we’re not just lobbing a lame pun. Norwegian musician Terje Isungset constructs all of his instruments from ice. He goes far beyond the percussion instruments and hanging chimes you might expect, creating horns, harps, didgeridoos, even a guitar. Watch. He plans to harvest ice from our city lakes to make his instruments. If you go, bring a scarf; this will not be a good night for the Cedar to crank the heat. Doors at 7, show at 7:30. FMI and tickets.

• Monday (Feb. 25): “Sister Rosetta Tharpe: The Godmother of Rock & Roll.” You can stay home and watch this on your tee-vee. PBS’ “American Masters” opens its 27th season with the story of the African-American singer and guitar virtuoso who brought the passion of gospel music into rock and inspired some of its biggest stars including Chuck Berry, Elvis, and Little Richard. We’re a bit cranky that this premieres nationwide on Friday but we won’t see it until Monday. Why is that?

• Monday and Tuesday (Feb. 25-26): “Breaking Ice.” Pillsbury House Theatre’s Breaking Ice company is seldom seen by the public; it performs for institutions, businesses and nonprofits, helping them confront topics related to diversity and communication that can be difficult to discuss. But while “Buzzer” (a Pillsbury House co-production) is at the Guthrie, “Breaking Ice” is doing a very short run on its own main stage. This production explores how the Minneapolis neighborhoods of Powderhorn, Central, Bancroft and Bryant are responding to neighborhood development and evolution, revitalization and gentrification. Who wins, who loses? Who is misunderstood? Can people who share the same ZIP code but little else learn to get along? We went to opening night and found it serious, funny and powerfully thought-provoking. If you go, stay for the discussion that follows. You’ll look at your own neighborhood with new eyes. FMI and tickets (pay-what-you-can). Free child care available.

Artscape is published Tuesdays and Fridays, but our Facebook page never sleeps. You can like us here.

SPCO musician’s departure a sad sign of the times; but happy food news