’Tis the season for season announcements. On Wednesday, Northrop unveiled its 2013-14 Northrop MOVES dance season at a party in the offices of its architect, HGA. First came a report on the status of the renovation/revitalization, begun in February 2011 and scheduled for completion in Spring 2014. In a nutshell, the new Northrop will have three times as much public space as before, three balconies instead of one, better sightlines, better sound, more bathrooms (here the audience cheered), a better space for the pipe organ (but no budget yet to restore it), a second lecture/performance space (170 seats), and an architecturally sensitive addition that deepens the stage and allows for crossover. Eighty percent of the seats will be within 100 feet of the stage, up from 20 percent in the old configuration. Happily, the proscenium arch is still there, with the damaged parts under repair; sadly, the great chandelier is in storage and waiting for a new home.

Ten Thousand Things Theater will celebrate its 20th anniversary with three new productions. Artistic director Michelle Hensley will direct Shakespeare’s “A Midsummer Night’s Dream” (Oct. 10 – Nov. 3) and a new play by Kira Obolensky (May 9, 2014 – June 1), title to be announced, about a mysterious peddler selling visions of the future and past. (Thanks to a major grant from the Andrew W. Mellon Foundation, Obolensky is on staff at TTT for the next three years.) Guest director Lear deBessonet will team with Peter Vitale for Meredith Wilson’s “The Music Man” (Feb. 13 – March 9). That’s our preliminary pick of the season because we can’t imagine what TTT will do with it, and we’re deeply intrigued. In a press release, Hensley promises to “[mix] things up in terms of gender and race and class, so that everyone can be included – on stage and in the audience.” Tickets go on sale in September. Under normal circumstances, the Minnesota Orchestra would have announced its 2013-14 season earlier this year, and we’d be telling you the SPCO’s season around now. Last night, the musicians of the Minnesota Orchestra played another nearly sold-out concert on its own, at O’Shaughnessy, under Stanislaw Skrowaczewski’s baton, but the 2012-13 season is a goner. The SPCO expects to resume the remainder of its 2012-13 season in early May.

We hope Louise Erdrich has a big fireplace mantel. Having just won a Minnesota Book Award for “The Round House” (and earlier, in November, the National Book Award), she’s up next for a Carnegie Medal for Excellence in Fiction. Her competition for the $5,000 prize: Junot Diaz (“This Is How You Lose Her”) and Richard Ford (“Canada”). The winners will be announced at the American Library Association’s conference on June 30.

Community Supported Art (CSA) goes on sale at 10 a.m. next Friday, May 3. Buy a share and sometime this summer you’ll receive two boxes of locally produced artwork: a print by Elisabeth Cunningham, a photograph by Horacio Devoto, something ceramic by Ginny Sims, and who knows what by visual artists Mary Bergs, Anne George, Katie Hargrave and Haley Prochnow. No telling what theater artists Jason Overby and Telsche Thiessen will prepare for you, or music and visual arts collaborative Take Acre (Rich Barlow, Jaron Childs, Charles Gillett, Davu Seru). Member shares are $300 and only 50 are available. A reservation form will go live at this link on May 3 at 10.

The Arts Board needs volunteers to review grant applications and give advice on funding recommendations for its Arts Learning, Folk and Traditional Arts, and Minnesota Festival Support programs. Artists, arts educators and administrators, teaching artists, and festival organizers are encouraged to participate. Panels meet in St. Paul; lodging is provided for panelists from Greater Minnesota. FMI.

We’ve heard that the Old Log might be on the block, and now it appears that a sale is imminent. Writing for the Strib, Graydon Royce mentions Twin Cities software executive Greg Frankenfield as a likely buyer and Excelsior developer Jon Monson as an interested party. Will the state’s oldest professional theater survive or be razed?

Tonight at Studio Z: Cherry Spoon Collective. Music fans with their ears to the ground have been hearing about a new group called Cherry Spoon Collective since sometime in 2011. There’s been one performance so far – at the Amsterdam in March last year – but this will be their official debut. One way to describe Cherry Spoon is as a multi-instrumental, cross-generational, poly-genre group of improvising musicians and composers, inclusive and morphable. Another way: musicians who can play pretty much anything. Another way: creators, seekers, collaborators, crossers-over. Project leaders are Michelle Kinney, Nick Gaudette, and Patrick O’Keefe; musicians include Laura Harada, Jacqueline Ultan, Chris Thomson, George Cartwright and Geoff Senn, among others. The band will hold an informal discussion between sets. 7 p.m. and 9 p.m., free. Studio Z is in the heart of Lowertown, and this is Art Crawl weekend, so you can do it all. Photo by Jim Nihart
Music fans with their ears to the ground have been hearing about a new group called Cherry Spoon Collective since sometime in 2011.

Tonight at the University of St. Thomas: poet Leontia Flynn of Belfast, Northern Ireland, reads from her work. Flynn is the winner of the annual Lawrence O’Shaughnessy Award for Poetry, named for the former St. Thomas English professor, former member of the Board of Trustees and recently retired head of the I.A. O’Shaughnessy Foundation. The $5000 prize honors Irish poets. 7:30 p.m. in the auditorium of the O’Shaughnessy Educational Center on the St. Paul campus, 2115 Summit Ave. Free and open to the public.

Tonight and tomorrow at the Ted Mann: VocalEssence performs “Paul Bunyan,” an operetta by Benjamin Britten with libretto by W.H. Auden. FMI and tickets. See the MinnPost interview with Don Shelby (the voice of Paul Bunyan) and conductor Philip Brunelle. 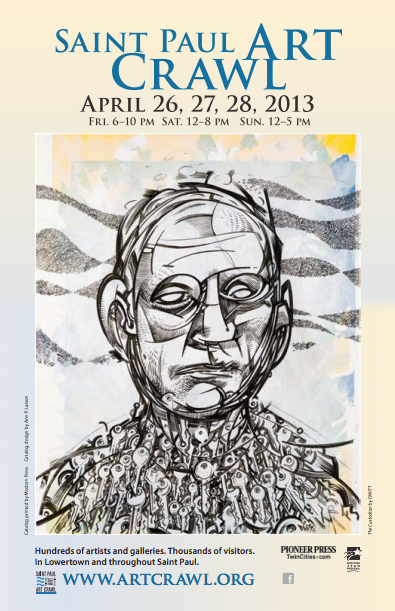 Tonight through Sunday: Saint Paul Art Crawl. The weather has promised to cooperate with this annual springtime ramble through hundreds of artists’ studios and galleries in Lowertown and throughout St. Paul. Here’s everything you need to know.

Tonight through Sunday at the Minneapolis Photo Center: “This Is Our Work.” The first public arts exhibition by Veterans in the Arts, formed in 2010 to encourage and support our military veterans, many with compromising health issues, to explore the arts. Nineteen veterans have come together to share their recent work as artists with fellow veterans and the public. Some of the work has war as its subject; some represents what is close to the artists’ hearts. Opening reception 8 p.m. Friday. Gallery hours 11 a.m. – 5 p.m. Saturday, 11 a.m. – 3 p.m. Sunday.

Saturday and Sunday at Macalester: Macalester Choirs Present Orff’s “Carmina Burana.” “Oh Fortune, fickle as the moon, constantly changing!” As many times as you hear it (OK, as many times as some of us hear it), the bawdy, blustery scenic cantata never gets old. Free, but seating is limited. 8 p.m. Saturday, 3 p.m. Sunday in the Mairs Concert Hall, Janet Wallace Fine Arts Center, 1600 Grand Ave., St. Paul.

Sunday in Minneapolis: A Mid Century Affair History Crawl. Architectural historian Jane Kine Hession leads an afternoon outing devoted to the decor, architecture and lifestyle associated with Midcentury Modernism. Starts and ends at the Saarinen-designed Christ Church Lutheran, with stops at Miller Upholstering, Forage Modern Workshop, and a nearby midcentury home. 1 p.m. – 5 p.m. FMI and registration ($60-$50). Can’t make it this Sunday? The tour repeats May 5.