On Thursday, SPCO management reached agreement with the American Federation of Musicians (AFM) on media issues and formally submitted its proposal to the musicians’ negotiating committee, which can now take it to the musicians for a ratifying vote. If enough musicians can make it home in time to vote by 5 p.m. Monday, it’s possible the SPCO lockout will end as soon as Tuesday and concerts will resume May 9.

Meanwhile, the Minnesota Orchestra is making us crazy. What exactly is the point of management’s recent decision to hire a New York-based consulting firm to conduct its own independent financial review? Weren’t the locked-out musicians the ones who called for the review? Wasn’t the plan to hold a joint review? Didn’t everyone agree to that in January? Sort of, but then things fell apart … again. The two sides couldn’t agree on the scope and terms. Regardless of who does the review, and whether it’s joint or not, shocking revelations of financial chicanery seem unlikely. But a review commissioned and paid for by management is labor-dispute theater.

Meanwhile #2, management has canceled concerts through May 12, leaving only two programs from the 2012-13 season: Gilbert Varga conducting Mozart, Haydn and Mendelssohn (May 16-18) and Vänskä conducting Dvorák and Sibelius (May 30-June 2). Meanwhile #3, Stanislaw Skrowaczewski will return next Thursday, April 25, to lead the musicians of the Minnesota Orchestra in works by Mozart and Bruckner at the O’Shaughnessy. Principal clarinetist Burt Hara will be the featured artist. FMI and tickets. Meanwhile #4, the musicians have accepted an invitation from management to address the full board of directors next Friday, April 26.

In case you missed the Rock the Garden line-up announcement, this year’s bands are Metric, Silversun Pickups, Bob Mould Band, Low, and Dan Deacon. Tickets go on sale to Walker and MPR members today at 11 a.m., if you’re reading this after 11:05, you’re probably too late. If you were otherwise occupied during Thursday’s Basilica Block Party reveal (stuck in traffic, for example, or shoveling snow), the 19 bands for 2013 include Grace Potter & the Nocturnals, Matchbox 20, Goo Goo Dolls, Sharon Jones & the Dap-Kings, and Matt Nathanson, plus Cloud Cult, Actual Wolf, Cactus Blossoms and Bomba de Luz. Thanks to Martin Williams Advertising, the Block Party has been rebranded with a new logo and a smart new phrase (and hashtag), “Praise the Loud.”

Today is Virtual Arts Advocacy Day. Speak up for the arts online. Go here anytime between now and 5 p.m., choose one or more issues, and email your legislators. It’s quick, it’s easy, and you’ll feel better after. The legislature is now creating the bills that will fund the arts. Last week, a House Committee proposed that only 41 percent of the Arts Legacy Fund go to the Minnesota State Arts Board/Regional Arts Councils system, down from 47 percent in 2009 (and the 50 percent advocated by Minnesota Citizens for the Arts). Go here if this is a concern for you.

Saturday is Record Store Day. Get up early, grab a donut and coffee, don your boots and parka, head for your favorite indie record stores and bring home some vinyl. New from Minneapolis-based Noiseland: “American Buffalo, Volume 2,” with Haley Bonar, Fathom Lane, A. Wolf & Her Claws, Solid Gold, the Pines, and more. From Legacy (Sony): Miles Davis’s “Round About Midnight” in mono on a 12″ LP. Yum.

Matisse is coming! Specifically, “Matisse: Masterworks from the Baltimore Museum of Art” will open at the Minneapolis Institute of Arts in February 2014. The paintings, sculptures, and works on paper, drawn entirely from the Baltimore museum’s permanent collection, will span six decades of the artist’s career. It should be another blockbuster. Criminally deprived of the daffodils, crocuses and Northern bluebells we usually see this time of year, we could all do with a profusion of flowers. Thank goodness for Art in Bloom. This is the 30th year of the popular annual event at MIA, a four-day festival of floral arrangements and fine art. More than 150 floral artists will participate. Last weekend at the 60 Artists on 50th art show at Burroughs School in Minneapolis, the fine young potter Jason Trebs sold a handsome vase to a floral artist who will use it in the show. Thursday, April 25 – Sunday, April 28. Free and open to the public. FMI.

The U.S. Senate may not understand the need to reduce gun violence, but many Twin Cities theater people do. On Monday, May 6, several will gather at the Varsity for a benefit and fundraiser to boost public awareness about gun violence. Directed by Joshua Campbell, “To Life!” will feature performances by Regina Marie Williams, Tod Peterson, Ann Michaels, Thomasina Petrus, Julius Collins III, Kasono Mwanza and more in songs from musical theater, short plays, scenes, and monologues reflecting on gun violence. Also expected: local politicians and Sami Rahamim, whose father was killed at Accent Signage. Proceeds benefit Protect Minnesota. Doors at 6:30 p.m., show at 7. VIP tickets $100, general admission $25. Tickets here.

“Turandot” is everything an opera should be: spectacular, thrilling, visually and musically gorgeous. In the Minnesota Opera’s lavish production of Puccini’s great opera (the one with “Nessun Dorma”), the stage is blood-red and pulsing with motion when the curtain first rises, and it gets wilder, with sword-wielding executioners, flag-wearing dancers, elaborate costumes (we learned during intermission that they represent three Chinese dynasties), and a large chorus. By the time we meet the princess Turandot, she has already had 30 men executed for presuming to seek her hand. She has a valid if antiquated reason for her chronic misanthropy, but eventually love conquers even her icy heart. Two alternating casts play the main roles; we saw Christie Hageman as Liu, Scott Piper as Calaf, and Helen Todd as Turandot, all in full, glorious voice. An inadvertently funny line from Wednesday night’s performance: “April does not bring flowers/and the snow does not melt.” Tell us about it. On Thursday, a few tickets remained for Sunday afternoon’s final performance. Tonight and Saturday are sold out. Way to end your 50th anniversary season, Minnesota Opera. Ring by George Sawyer, part of the ACC show

Tonight through Sunday at the Saint Paul RiverCentre: the 27th annual American Craft Council (ACC) Show. Featuring more than 230 fine craft artists – creators of one-of-a-kind jewelry, ceramics, wearables, furniture, accessories, works in glass, musical instruments and more – this high-end juried show attracts thousands of collectors and enthusiasts. The ACC, a national organization, holds just four shows each year: in Baltimore, Atlanta, San Francisco, and St. Paul. How did St. Paul make the list? Credit Sam Grabarski, who headed the Minnesota State Arts Board from 1984-96. He and his board talked the ACC into moving its Dallas show to Minnesota, where it has remained since 1987. Friday 10 a.m. – 8 p.m., Saturday 10 a.m. – 6 p.m., Sunday 11 a.m. – 5 p.m. Tickets here.

Tonight through Sunday at the Lab Theater: “C.” A musical in the making. Book and lyrics by Bradley Greenwald, music by Robert Elhai, directed by Peter Rothstein, starring Greenwald as Cyrano. If you’re going to take a chance on something new, do it in good company. Part of Theater Latte Da’s “Next: New Musicals in the Making” series, these are public readings of a work-in-progress, not a fully-realized production. 7:30 p.m., 700 North 1st St. Minneapolis. $14. Tickets here. 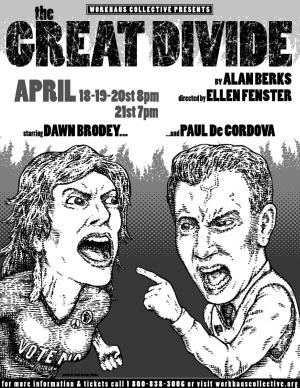 Tonight through Sunday at the Playwrights’ Center: “The Great Divide.” It’s Red vs. Blue close to home in Alan Berks’ new political play. When a middle-aged Republican tries to unseat the popular Democratic incumbent in Minnesota’s 8th Congressional District, he agrees to an interview with a liberal Twin Cities blog, hoping to attract sympathy and donations from the national Tea Party movement. Presented by Workhaus Collective, directed by Ellen Fenster, this is a workshop production – another first look at a brand-new thing. Berks’ adaptation of Pirandello’s “Six Characters in Search of an Author” recently played the Gremlin to glowing reviews. 8 p.m. Friday and Saturday (post-show discussion Saturday), 7 p.m. Sunday. FMI and tickets (pay-what-you-like).

Saturday and Sunday at the MIA: Minneapolis Print & Drawing Fair. Now in its 20th year, this annual event brings collectors and the curious to brows a fantastic show of works by people like Rembrandt, Picasso, and today’s emerging artists, all available for purchase. 11 a.m. – 5 p.m. Free admission.

Saturday and Sunday at the Capri Theater: “Etta … Tell Mama!” Thomasina Petrus pays tribute to Etta James. Many of us will remember Petrus as Billie Holiday in “Lady Day at Emerson’s Bar & Grill.” This time she’ll channel the singer of such hits as “At Last,” “Tell Mama,” and the searing love song “I’d Rather Go Blind.” The thought of Petrus letting loose on that one makes my heart beat faster. 7 p.m. Saturday, 3 p.m. Sunday. Tickets here.

Sunday at the Landmark Center, Weyerhaeuser Auditorium: “The Spirit of ’Trane.” The jazz trio Red Planet – Dean Magraw on guitar, Jay Epstein on drums, Chris Bates on bass – explores the music of John Coltrane as only they can. Trust us on this. 4 p.m., $15.

Sunday at Central Lutheran Church: organist Gunnar Idenstam. Not that there’s anything wrong with church music, but isn’t it great to hear something else on a big pipe organ? (We’re thinking fond thoughts about John Zorn’s recent midnight performance at St. Mark’s Cathedral.) On Sunday, Swedish organist Idenstam sits down at Central’s mighty Casavant organ for a set of Swedish folk music (including a wedding march by ABBA’s Benny Andersson), Bach’s Toccata and Fugue in D minor, Ravel’s “Bolero,” and more. A reception following will include a conversation between Idenstam and “Pipedreams” host Michael Barone. 4 p.m. FMI and tickets.

Monday at Birchbark Books: on Earth Day, Jim Lenfestey reads from his latest collection of poems, “Earth in Anger.” He asks us to think hard about planet Earth, climate change and species destruction. Heid Erdrich will introduce him. 7 p.m., free. Future readings of “Earth in Anger”: May 7 at River Falls Public Library, May 22 at Subtext Bookstore, June 2 at Plymouth Congregational Church.