Which of three finalists in the Forever Saint Paul Challenge deserves a $1 million-dollar grant to make the city an even better place to live? That’s up to you and other members of the public. Tracy Sides would like to transform a vacant building at the Bruce Vento Nature Sanctuary into an urban oasis – a local food hub and nature-themed event center. Jack Ray wants to help young people learn to work in a variety of media by establishing the Saint Paul Center for Creative Arts. Craig Blakely’s plan: the Saint Paul Art Train, a series of incubator spaces made from old passenger train cars. Voting is open now and ends Sept. 2. The winner receives a $1,000 prize; the grant money actually goes to the organization of his or her choice to implement the idea, but the winner may stay involved in the project’s creation.

It’s not too late to RSVP for the Orchestrate Excellence forum, happening tonight at 6:30 p.m. at Westminster Presbyterian Church in downtown Minneapolis. (Everyone is welcome, but RSVPs are helpful so the hosts can plan accordingly.) Keynote speaker Alan Fletcher has thrown out the first two questions he would like attendees to consider: “Does Minnesota want a world-class orchestra, and why?” And “What will you, as a community member, do to support a world-class orchestra, and how?” The forum will stream live on the internet via The UpTake. An icon for the forum should appear on the home page by 6:20 p.m. Click the “Live Coverage” tab to listen.

The Musicians of the Minnesota Orchestra have announced another free concert, to be held the day after their Lake Harriet concert. On Monday, Sept. 16, principal trumpet Manny Laureano will conduct “Magic of the Symphony,” a community concert featuring music by Beethoven and Tchaikovsky that will teach audience members how a classical symphony is structured. The concert kicks off the second year of El Sistema Minneapolis, whose mission is to provide “a complete classical music education, free of charge or at low cost, without discrimination for any student that wishes to study but is limited in financial means.” Begun in Venezuela, El Sistema is credited with transforming thousands of lives; Gustavo Dudamel, the charismatic maestro of the L.A. Philharmonic, is among its graduates. The concert (6:30 p.m.) follows a carnival (4 p.m.) benefiting El Sistema Minneapolis. At the North Community YMCA Youth and Teen Enrichment Center, 1711 West Broadway, Minneapolis.

Meanwhile, Minnesota Orchestra recording sessions scheduled for September have been postponed, the Strib’s Graydon Royce reported Monday afternoon. The orchestra was due to record two Sibelius symphonies and a Beethoven piano concerto for the Swedish label Bis starting Sept. 16, a follow-up to last year’s Grammy-nominated Sibelius disc. According to MPR’s Euan Kerr, Bis officials no longer believe the orchestra is “in good-enough shape” to proceed at the present time.

Music makes sick kids feel better, including kids battling serious illnesses like cancer. “We’ve seen that bringing pianos and music into hospitals and even into the hospital rooms of these kids who are sick gives hope to people,” says Newell Hill, founder and executive director of Keys 4/4 Kids, a nonprofit that donates pianos to low-income families, churches, schools and community centers. A benefit Friday at SEVEN supports Keys 4/4 Kids’ latest effort, the Ellen Project, which plans to donate 88 pianos to 88 hospitals in Minnesota and around the country. (Another Keys 4/4 Kids project is Pianos on Parade, if you’ve been wondering where those stray painted pianos are coming from.) The black-and-white-themed cocktail party and dinner will feature food by SEVEN and music by Minnesota pianist Don Irwin. Friday, Aug. 23, 6 p.m. – 10:30 p.m. Tickets here ($88, for the number of keys on a piano, unless it’s a Bösendorfer.) Watch the video and you’ll be reaching for your checkbook.

Last Saturday, the day after what would have been Jeanne Arland Peterson’s 92nd birthday, the Peterson Family announced the Jeanne Arland Peterson Scholarship in Jazz Studies at the University of Minnesota School of Music. Recipients will be full- or part-time UMN students, majoring in music and focusing their studies on jazz. When Peterson passed away in late June, musicians and admirers near and far made memorial gifts and contributions in her honor. These are now part of the scholarship fund, to be administered by the U of M Foundation.

Tomorrow night (Wednesday) at the Minnesota Zoo, the stage at Weesner Family Amphitheater will be named the “Sue McLean Stage” in honor of the much-loved concert promoter who died in May at age 62. A ceremony will be held at 6:30 p.m. for the family and Zoo officials; a brief public dedication of the stage will take place just before the start of the Lyle Lovett concert at 7:30. (Those of you watching “The Bridge” on FX are getting glimpses of Lovett in his role as the menacing but gentlemanly attorney Flagman.)

There will finally be a real Minnesotan on “Top Chef.” The Pi Press reports that Sara Johannes, executive chef at Shoyu on the G concourse at MSP International Airport, is one of 18 contestants on the show’s 11th season, which starts Wednesday, Oct. 2 on Bravo. Too bad you can only eat at Shoyu if you’re traveling. 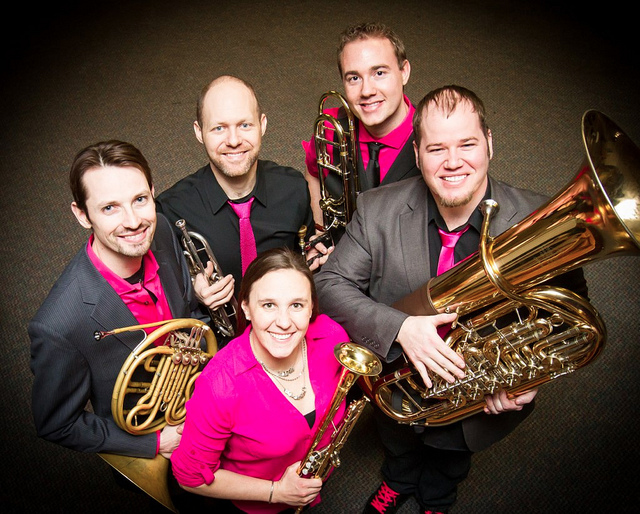 The Copper Street Brass Quintet will be performing Sept. 7 at the Concrete and Grass Lowertown Music Festival.

The line-up for this year’s Concrete and Grass Lowertown Music Festival, scheduled for Thursday-Saturday, Sept. 5-7 in Mears Park, is enchantingly eclectic. Thursday: The SPCO and Moore by Four. Friday: Alison Scott, Marimba Africa and Lucy Michelle featuring Chan Poling and John Munson (of the New Standards). Saturday: Copper Street Brass Quintet, Minnesota Opera, The Sphericals and Halloween, Alaska. It’s good to see so much classical music in a free outdoor festival in the Twin Cities. FMI.

Liquid Music’s second season begins Sept. 22 with performances by singer-songwriter Zola Jesus and former SPCO Artistic Partner Stephen Prutsman with a string quartet of SPCO musicians, plus percussion and cello duo Ian Ding and Ashley Bathgate of Bang on a Can All-Stars. Take a look at the highlights reel, featuring moments from last year’s season and peeks at this year. Liquid Music concerts were among our favorite events of 2012-13. 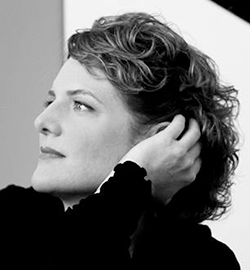 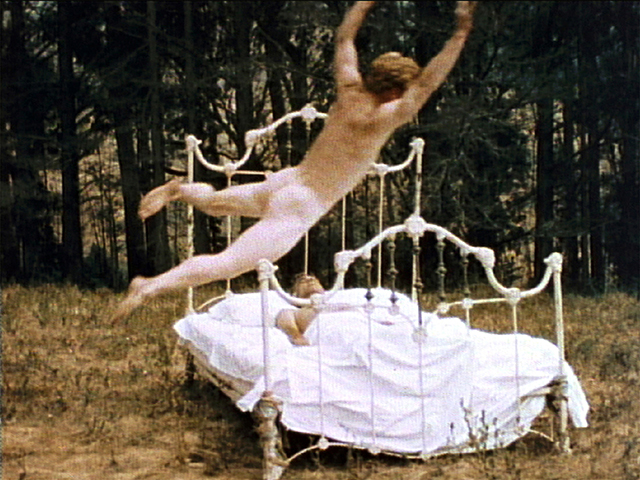 Thursday at the Walker Cinema: “Big Joy: The Adventures of James Broughton.” Broughton once said, “I believe in ecstasy for everyone.” A poet and experimental filmmaker who helped create the indie film scene, and a defining artistic voice of the sexual revolution of the 1960s and ’70s, Broughton is documented and celebrated in an award-winning film by Stephen Silha, who will be present to introduce it. Minneapolis native Silha is founder of  Journalism That Matters and son of Otto Silha, president and publisher of the Minneapolis Star and Tribune in the 1970s. 7:30 p.m. Preceded by a new print of Broughton’s legendary “The Bed.” Free tickets in the Bazinet Lobby starting at 6. Poetry event/workshop (with Rain Taxi Review of Books) in the Garden Café at 6. FMI.

Thursday at the Minneapolis Institute of Arts: “Identity Ink” show of art by youth at risk. For the past 8 weeks, 100 young people from several social-service agencies have been working with Free Arts Minnesota, MIA, and local artist Natasha Pestich to create personal narratives on identity and create screen-printed clothing. Come see what they’ve done. 6 p.m. – 9, with a panel discussion at 6:30 featuring kids from the program. Free. FMI. 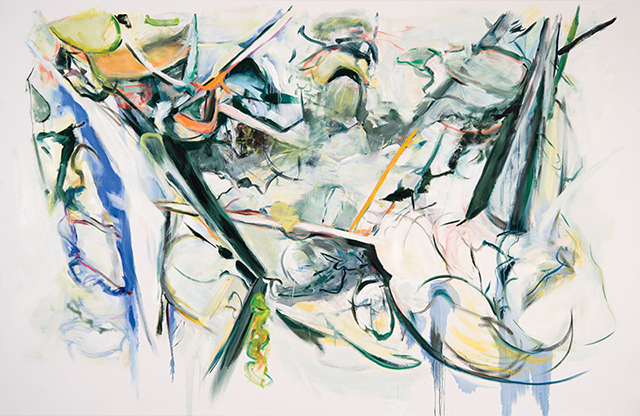 Thursday at the Vine Arts Center in the Ivy Arts Building: “Substance of Life” opening reception. Large-format paintings by Jil Evans, Betsy Ruth Byers, Patrick Kemal Pryor and Jodi Reeb, all artists who love the physicality of paint, big spaces and color. They’ll tell you about their paintings at a reception that also includes an artist talk. 6:30 p.m. – 8:30, artist talk at 7. 2637 27th Ave. S., Minneapolis. Free.

Friday at the Aster Café’s River Room: Tom Lieberman “Common Denominator” CD release. Lieberman has led a wide swath of a life: as singer-songwriter with Rio Nido (with Prudence Johnson and Tim Sparks) and Lieberman, Fogel and Bey (with Arne Fogel and the late Turhan Bey), producer of the hit film “Sweet Land,” creative director of the company that brought us “Sesame Street Live,” puppeteer, and the list goes on. No wonder it took him forever to make a CD of his own songs. It’s timeless, tuneful, and totally charming. We’re reminded of Mose Allison, Ben Sidran, and Dave Frishberg – guys who can write and communicate a lyric – plus he can sing. He’s funny, witty and serious; he swings and teases and leaves you teary. At this writing, just a few seats remain, but standing room is available. $15 gets you in, plus you leave with a CD. Doors at 7 p.m., show at 8. 125 Mainstreet SE, Minneapolis. Call 612-379-3138. FMI.