As of last week, St. Paul has two fabulous new works of public art, both on permanent display at Union Depot. Minneapolis artists Amy Baur and Brian Boldon completed installation of “Trainscape,” a 146-foot panoramic scene of printed ceramic tiles and glass prisms in the carriageway on the lower level. Upstairs in the Great Hall Atrium, Philadelphia artist Ray King hung thousands of bits of glass to create “Twin Waves” of light and shadow.

“Trainscape” and “Twin Waves” join the previously installed “Side Track” kinetic sculpture by Connecticut artist Tim Prentice, which hangs in the new Kellogg Entry. The “Ode to Minnesota” collage-and-resin table by Josie Lewis, and the musical ping-pong table on wheels by Andrea MacGuffie, Noah Keesecker and Peter Haakon Thompson, are both in the Waiting Room. Still to come: a series of six historical and multicultural murals by Georgia artist Ralph Gilbert, an interactive multi-media project by Steve Dietz from the Twin Cities-based Northern Lights.mn, and works by Michael Bahl, Kyle Fokken and Aldo Moroni.

We’re jumping up and down about this whole public-art-in-Union-Depot thing. We’re impressed that when the Ramsey County Regional Railroad Authority (RCRRA) began the $243 million Union Depot renovation project, they included $1.25 million for public art, a serious chunk of change. When asked why, Josh Collins, the Depot’s public art administrator, avoided high-flying language and simply said, “It makes it special.” He’s right.

Walk into the Depot from Fourth Street, look up and around, and get lost in King’s glittering suspended sculpture and the shadows it casts on the walls. (You can also see it from the outside, a gift to passersby.) Arrive by car, taxi or van, look to the left, and ride through St. Paul history with Baur and Boldon’s massive work of color, motion, and imagery. (It begins with the words “To trains” and ends with “Watch your step.”) At night, the prisms gather and reflect light from passing vehicles. Without “Trainscape,” the Depot’s carriageway is just another concrete corridor. 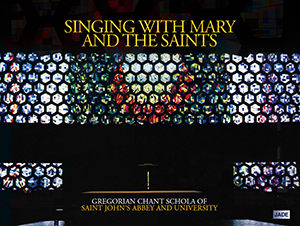 Many of us will remember “Chant,” the album of Gregorian chant performed by the Benedictine Monks of Santo Domingo de Silos, a monastery in Spain. Released in 1994, it reached No. 3 on the Billboard 200 chart and sold 6 million copies around the world. Under the direction of Fr. Anthony Ruff, OSB, the Gregorian Chant Schola of Saint John’s Abbey has made its own album of chants for the liturgical year. Recorded on location at the Emmaus Chapel on the campus of St. John’s University in Collegeville, “Singing with Mary and the Saints” is luminously beautiful and out today. If you want, you can download it from iTunes, but you won’t get the booklet and extensive liner notes, with translations of all the chants. Listen to “Beatus Iste Sanctus (Blessed This Saint)” on SoundCloud.

We spoke briefly by phone with Father Ruff on Monday.

MinnPost: Why did you decide to record an album of chant?

Fr. Ruff: Because I’m a monk. We do Latin chant in the monastery, and it’s something we teach our students, for those who want it. We wanted to share some of our worship life.

MP: Was “Singing with Mary and the Saints” inspired even a little by the success of the earlier “Chant” album?

Fr. Ruff: I’m thinking humility. I’m not planning on getting rich. If we break even, that’ll be just fine.

MP: Are you planning any special events around the CD release?

Fr. Ruff: We hadn’t thought we were, but hearing you ask is getting us thinking maybe we should have.

People are welcome to come and worship with us. Call ahead [320-363-2085] and ask whether the chant choir is singing. We’re singing this Sunday morning at mass, at 10:30. It’s the big anniversary of the dedication of the Abbey church.

Congratulations to Twin Cities Public Television, the most-viewed public television station in the nation in 2012-13, according to the latest Nielsen ratings. This is something TPT will be sure to mention during its next pledge drive, as it should. It’s a big deal to beat out Baltimore, Portland, New York, and even Boston, home of the formidable WGBH. If only someone from TPT would have a stern talking-to with Julian Fellowes, who writes “Downton Abbey.”

Thanks to our revised state social studies standards, which designate Minnesota state history and government as the main focus of sixth-grade social studies curriculum, the Minnesota Historical Society is giving sixth-graders a pass. Not a hall pass, but free admission to any MHS historic site or museum during the entire 2013-14 academic year. All Minnesota sixth graders are eligible. Learn more and request a pass here.

Coming up on Nov. 20: Richard Moe, former chief of staff for Vice President Walter Mondale, will keynote the second Paul and Joan Nagel Lecture at the U. Moe will discuss his latest book, “Roosevelt’s Second Act: The Election of 1940 and the Politics of War,” which focuses on a critical point in American political history: Roosevelt’s decision whether to seek a third term. Vice President Mondale will introduce him. A dessert reception and author signing will follow. 7:30 p.m. in the Cowles Auditorium at the Humphrey School of Public Affairs. Free and open to the public. UPDATE: Reservations requested. Reserve here through Nov. 15.

Not that we think it will do much good — the board and management of the Minnesota Orchestra seem largely oblivious to public opinion — but things are heating up again around the labor dispute and the lockout, now 22 days into its second year. (Whenever we want to know how long it’s been, we check principal trumpet Manny Laureano’s latest Facebook posting.)

The Star Tribune reported last week that Rep. Alice Hausman, DFL-St. Paul, is questioning whether the MOA is in violation of the law concerning use of the recently renovated hall. We helped pay for the renovation, now where are our concerts? Some people are feeling peevish about MOA President Michael Henson’s big fat $200,000 bonus. As Doug Grow noted Monday, the MOA’s efforts to downplay Henson’s pay aren’t cutting it. (And when the MOA points out that six of the nine highest-paid MOA employees are musicians, they neglect to mention that four of those six are now gone — resigned, retired or working elsewhere.)

Meanwhile, Save Our Symphony Minnesota has prepared a helpful list of sympathetic political leaders, with contact information. And the musicians have compiled their own list of 11 “Musician Counter Proposals You May Have Missed.”

Today (Tuesday, Oct. 22): Cerulean Fire at Hamline’s Sundin Music Hall. Violinist Margaret Humphrey and harpsichordist Asako Hirabayashi, formerly of Ladyslipper, have formed a new ensemble that debuts today. One of their goals is to break down boundaries between classical and non-classical music, and today’s program is a good start: previews of Hirabayashi’s new opera “Snow Witch,” Renaissance songs, and Charlie Daniels’ “Devil Went Down to Georgia,” all themed around love and death. With lutenist Philip Rukavina and soprano Momoko Tanno. 7:30 p.m., $18 adult/$8 student. Call 651-523-2459 or show up. TIP: If you’re at or around the St. Paul Athletic Club today, you can see a free concert at noon. 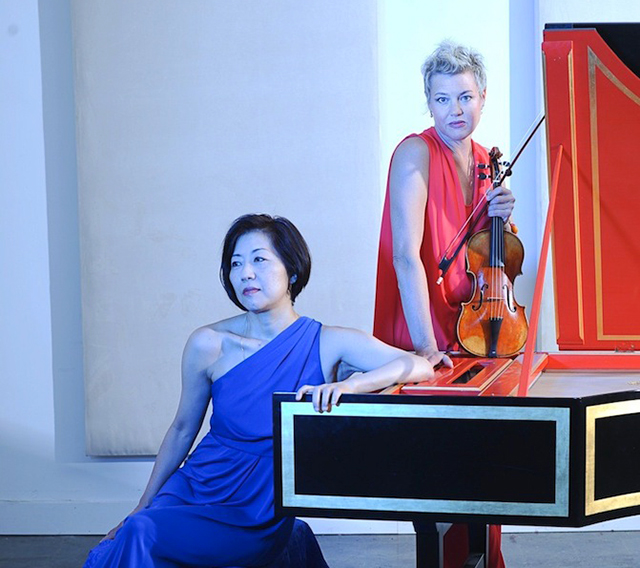 Wednesday: Composer Conversation at the Amsterdam with soprano Dawn Upshaw and composer Shawn Jaeger. This weekend marks the world premiere of Jaeger’s “The Cold Pane” for soprano and chamber ensemble. Commissioned by the SPCO, the new work sets five poems by Wendell Berry to music. Jaeger describes “The Cold Pane” as “about the opposition between the natural, external world and the human, internal world of emotions, and how those two worlds can be at odds. It’s also about life, death, grief, and the seasons.” His instrumentation references that of a bluegrass band. Classical MPR’s Emily Reese will lead the conversation. 7 p.m. Free, but reservations are required. The concerts are 8 p.m. Saturday at the Ordway, 2 p.m. Sunday at the Ted Mann. FMI and tickets.

Wednesday: “Time/Travel” fashion show at Union Depot. We apologize for listing this incorrectly last week. On the bright side, we get to list it twice. The waiting room at the newly renovated transportation hub seems ideal for events like this one: a runway show inspired by the past and future of travel. See original clothing designs by top local designers, with elaborate lighting and visuals; enjoy musical street performers and complimentary hors d’oeuvres passed by costumed train attendants. Cash bar. 7 – 8:30 p.m. General admission $12, VIP seating (great views plus a swag bag) $28. FMI. Tickets. All aboard?

Wednesday: “The Value of Abstraction” panel discussion at Kolman & Pryor Gallery in the Northrup King Building. Almost any arts experience benefits from a little prior knowledge. You don’t have to be an expert to enjoy a performance or an exhibition, but even a bit of background can mitigate the “huh?” factor. In conjunction with its new exhibit, “30 x 30,” Kolman & Pryor has invited Camille LeFevre (arts journalist and new managing editor of The Line), Mary Abbey (the Star Tribune’s art critic), Christina Chang (curator of engagement at the Minnesota Museum of American Art) and Andy Sturdevant (writer, artist, arts administrator and MinnPost columnist) to ask and answer questions about abstract art. 7 – 9 p.m. Free. TIP: Attend the panel, look around at “30 x 30,” then plan to catch “Painter Painter” at the Walker before it closes Oct. 27. 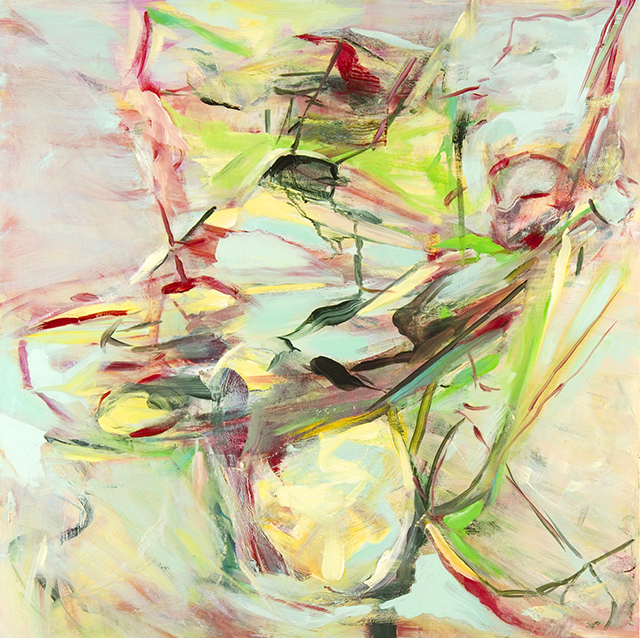 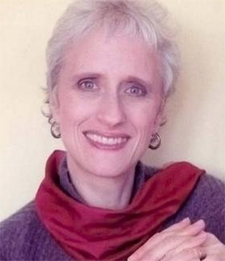 Thursday: Sara Paretsky at Once Upon a Crime. Does the name V.I. Warshawski ring a bell? Then you’re already a fan of mystery writer Sara Paretsky and her tough, stubborn, Johnny-Walker-drinking, opera-singing woman detective. Paretsky was one of the first authors to feature a female gumshoe. In 2011, she was named Grand Master by the Mystery Writers of America. At Once Upon a Crime, the big little independent mystery bookstore on West 26th Street in Minneapolis, she’ll read from and sign her latest, “Critical Mass.” 7 p.m. Free.

Thursday: One Minneapolis One Read panel discussion and exhibit opening reception at Mill City Museum. This year’s One Minneapolis One Read selection is “A Choice of Weapons,” the autobiography of prominent African American photographer Gordon Parks, who spent his teenage years in St. Paul. Mill City is hosting a collection of photos by Parks, on loan from the Gordon Parks Foundation, alongside photographs created by Minneapolis high school students who worked with acclaimed New York photographer Jamel Shabazz earlier this month at Juxtaposition Arts. View the photos and take part in a community conversation. 7 p.m. Free, but please RSVP by email to oneread@minneapolismn.gov or call 612-673-2509.

Thursday: And the Professors “Postmortem” album release at the Cedar. Even if you watch our local music scene in the most casual way, you can’t help but notice how fluid and collaborative it is. Members of one band get together with members of other bands and before you know it, there’s another band. And the Professors may be the season’s most interesting gumbo. Take members of the Honeydogs, Brother Ali, Chastity Brown, Heiruspecs, and Dessa’s band, then top it off with singers from the Minnesota Opera, and this is what you get: first-person chamber pop with a message. Thursday’s band is Adam Levy, Joey Van Phillips, Aby Wolf, deVon Gray, Bethany Larson and those opera singers. Here’s “Something Burning.” Doors at 7 p.m., music at 7:30.  (Farewell Continental and Ben Rosenbush & The Brighten will open.) $10 advance/$12 day of show. FMI and tickets. CORRECTION: And the Professors includes members of the Minnesota Opera Orchestra, not singers from the Minnesota Opera. Specifically, a string quartet.