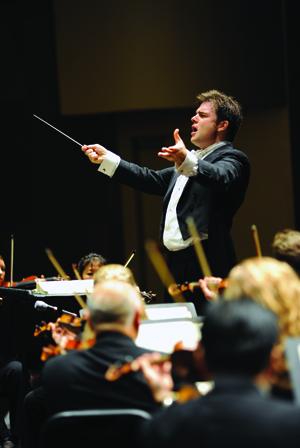 Christie was named the Opera’s first-ever music director in 2012, so we in the Twin Cities know him mainly as the man who most recently led Verdi’s “Macbeth,” and before then the world premiere of Kevin Puts’ Pulitzer Prize-winning “Silent Night,” among others – nine operas to date. He’s already on board for the new commissions “The Shining,” which will have its world premiere in May 2016, and “The Manchurian Candidate,” opening in March 2015. Christie likes conducting new operas. “I enjoy working with the composers,” he told MinnPost yesterday. “It’s an enchanting experience. It reminds me over and over how malleable music is, how hard composers work to express themselves on paper. Working with new composers reconnects us to the human part of music-making. It’s not just dots on a page.”

At 39, Christie also has an impressive 16-years-and-counting symphonic career, serving as music director of the Phoenix Symphony and the Brooklyn Philharmonic, as chief conductor for the Queensland Orchestra in Australia, and making guest appearances leading orchestras throughout Europe and around the world. The Rachmaninoff, the Stravinsky and the Ravel are all works he knows well and has conducted many times. “This is a fun program for me. Recently, I did two complete cycles of Rachmaninoff, with the Phoenix Symphony and the Colorado Music Festival. I’ve conducted ‘Boléro’ half a dozen times, and the ‘Firebird’ suite many times. I’ve also played the ‘Firebird’ as a trumpet player, and it’s a piece I really enjoy. I had an amazing opportunity at the Zurich Opera to conduct all of Stravinsky’s ballets as ballets. So every time I open the ‘Firebird’ score, I see someone dancing.”

This won’t be Christie’s first time conducting the Minnesota Orchestra. “Fifteen years ago, when I was just getting started, I did a Young People’s concert for them. They bused in legions of children and it was really fun.” This will, however, be his first appearance as conductor in the main season.

When did he get the call? “Very shortly before the musicians and management settled. It came together very quickly.” Was he surprised? “I was very excited and humbled that they would have me on as part of this series, at the opening. I never asked ‘Why me?’ I would like to think, having done nine operas with the Minnesota Opera, that people know what I can do.”

Leading the Minnesota Orchestra’s subscription openers is a big deal, especially this year, when it looked for a time as if there wouldn’t be a season and the newly renovated Hall would stay dark. The subscription series is the Orchestra’s bread-and-butter. It’s what keeps audiences coming back week after week.

Christie sees this as more than a one-time thing. To him, it’s an opportunity to build bridges between organizations like the Minnesota Opera and the Minnesota Orchestra. “There’s a growing sense of collaboration around the country,” he says. “I’ve seen it in so many other cities. Especially where there are organizations that have expertise others don’t necessarily have. [For example,] I wouldn’t expect the orchestra to be experts in costume-making.” And yet, the orchestra presents a semi-staged opera each year as part of Sommerfest. This year, it’s Johann Strauss’ “Die Fledermaus.” Hmmm.

“I would like to think we can look confidently at each other across the table and say, ‘We can amplify the experience for our community by harnessing each other’s expertise,’” Christie says. “There’s great power to that. Coming out of the recession forces us to be aware that communities are looking for a holistic resurgence. It’s no longer one group or another getting all of the attention, or all of the energy it takes to regain the sense of stability we had pre-recession. People here are just as interested in attending Theatre Latté Da or the Children’s Theatre or going to the Minneapolis Institute of Arts as they are in coming to an orchestra performance. They need it all to be there for their quality of life. I’m very hopeful that this is the start of our two organizations naturally looking at each other as collaborators.”

This week, as Christie prepares to lead the subscription concerts at Orchestra Hall, “I’ll have time to talk with orchestra management about projects we’re going to be doing, singers we’re bringing to town. I don’t feel we have absolutely proprietary ownership of people we bring in.” That’s a different tune than the one we heard in 2005, when the Schubert Club announced an upcoming recital by soprano Deborah Voigt and the Minnesota Orchestra forced a cancellation, citing a previously booked May 2006 appearance with an exclusivity clause. “I would like to be able to look at each other and see opportunities, rather than competing,” Christie says. “That’s much more healthy, and it’s how I operate.” Christie has already spoken with Bob Neu, the Minnesota Orchestra’s general manager. “He’s very anxious and eager to know more about what we’re doing and look at our resources.

“I think we’re all interested to see what the orchestra wants to do going ahead, moving into the future. If they’re as open with us as we are with them, we can see opportunities. Minnesota Opera is going into the experience of this week of concerts, and the excitement of that, with open arms. We’re saying, ‘We’re thrilled you’re back. Now let’s see what we can do together.’

“Having me conduct these concerts represents a clear desire among arts organizations to be seen working together, trying to formulate a good working relationship. It’s something that probably wouldn’t have been possible until quite recently. I can say from 20 years of conducting professionally that it is much better to collaborate than to be in a silo.”

Tonight at the Dakota: Jana Nyberg Group with the Benje Daneman Quartet. On her latest full-length album, “Winter Song,” powerhouse jazz and pop singer Jana Nyberg sings about snow in a way that almost makes us like it. Nyberg and her band with trumpeter (and Nyberg’s husband) Adam Meckler will bring heat and high energy to the Dakota’s stage for tonight’s Foodie Night (meaning no cover for music, and select $10 bottles of wine). Opening: visiting trumpeter Benje Daneman, who has toured with Doc Severinsen, recorded a Grammy-nominated album with the HMI Big Band, and been a finalist in the National Trumpet Competition. Daneman’s band will play the first set, Nyberg’s the next, and the evening will end with Meckler and Daneman together. Two trumpets are twice the fun of one. 7 p.m., 1010 Nicollet Mall. P.S. Daneman’s drummer is Chicagoan Christian Euman, who filled in for Kendrick Scott in Kurt Elling’s quintet last week when Scott couldn’t get out of New York City. Euman was terrific in the hot seat then and we’re expecting no less from him tonight. 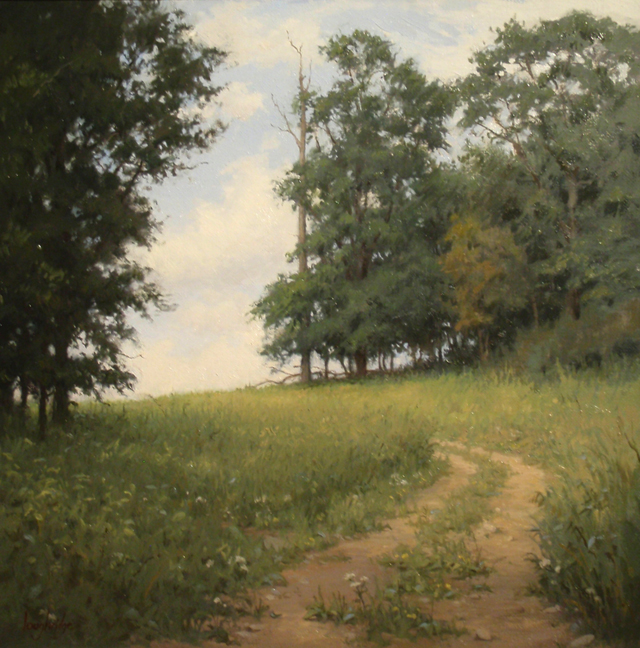 Used with permission of the artist
“Meadow Road” by Stuart T. Loughridge

Wednesday at the Minneapolis Club: Artist’s reception for New and Recent Work by Stuart T. Loughridge. We first met the soft-spoken Loughridge at the Artists’ Quarter, where he sketched and painted jazz musicians who performed there and the people who came to hear them. His subjects also include landscapes and still lifes, his media oils, ink, intaglio and watercolor. 5-8 p.m., free and open to the public. Loughridge’s works remain on display through Feb. 28.

Wednesday at the American Swedish Institute: Ed Bok Lee. The award-winning poet spent January in residence at the ASI’s Wallenberg Library and Archives, researching diary entries, poems and letters written by Swedish immigrants. He’ll recap his residency and share new work – poems based on the typographic appearance, form, and sounds of the materials, since the texts have never been translated into English and Bok Lee doesn’t speak Swedish. He calls them “meta-translations.” The evening will include a conversation beween Bok Lee, ASI’s librarian and archivist Cassie Warholm-Wohlenhaus, and Coffee House Press publisher Chris Fischbach. Bok Lee is one of several writers Coffee House Press has placed in some of the Twin Cities’ most interesting libraries. 6:30 p.m. Free and open to the public. 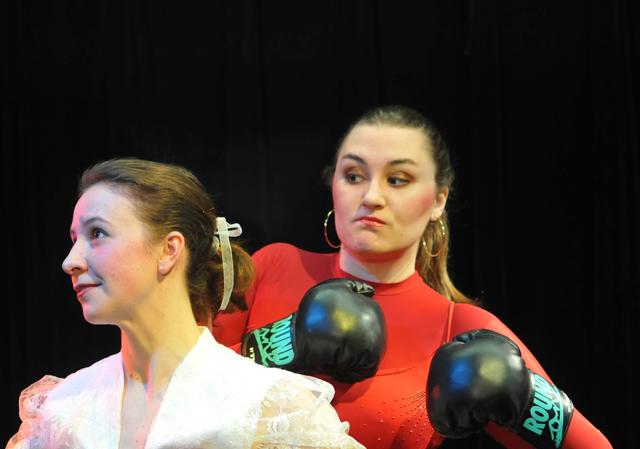 Thursday at the Amsterdam: “Tonya & Nancy: The Opera.” Hard to believe it’s the 20th anniversary of America’s most colorful ice-skating scandal. Created by composer Abigail Al-Doory Cross and writer Elizabeth Searle, this opera premiered in 2006 at the American Repertory Theatre in Boston, where it was hailed as “a real knee slapper.” The evening includes a viewing of the Ladies’ Long Program in Sochi, with trivia and prizes. Presented by Mixed Precipitation, directed by Scotty Reynolds. Doors at 6 p.m., show at 7. FMI and tickets ($8/$10).

Thursday at Magers & Quinn: Grant Hart Presents 100 Years of William S. Burroughs. Twin Cities artist Hart had a ten-year friendship with Burroughs, the godfather of the Beats and one of the 20th century’s most notorious free thinkers. At what’s being called a “special salon,” Hart will talk about Burroughs and read from some of his favorite writings. Hart’s collection of Burroughs memorabilia is on display at the bookstore through the end of February. Burroughs would have turned 100 on Feb. 5. 7 p.m. Free and open to the public.

Thursday at the St. Anthony Main Theatre: The Fifth Annual Minnesota Cuban Film Festival begins with “Ciudad en Rojo” (City in Red). It’s the late 1950s and the city of Santiago de Cuba is afire with resistance to dictator Fulgencio Batista. This year’s festival focuses on women and Afro-Cubans in Cuban cinema; “Ciudad en Rojo” was directed by Rebeca Chávez. 7 p.m., $8.50. FMI and tickets. The festival continues on Thursdays through March 27.