Minnesota Opera has announced its 2014-2015 season, an alluring blend of classic and new, comedy and drama, favorites and premieres. The big news is the world premiere of “The Manchurian Candidate,” the second opera by composer Kevin Puts and librettist Mark Campbell, whose “Silent Night” won the Pulitzer Prize. The great soprano Brenda Harris, last seen as Lady Macbeth, will sing the role of Eleanor, the ruthless, manipulative mother of brainwashed soldier Raymond Shaw. If you love the TV series “Homeland” (the first few seasons, at least), put this on your list. Other highlights include brand-new Minnesota Opera productions of Bizet’s “Carmen” and Engelbert Humperdinck’s fairy-tale opera, “Hansel and Gretel.”

Here’s the line-up: “La fanciulla del West” in September, “Hansel and Gretel” in November, Donizetti’s “The Elixir of Love” in January, “The Manchurian Candidate” in March, “Carmen” in April-May. All productions are at the Ordway, and all are new to Minnesota audiences, so even if you’ve seen it before, you haven’t. Season tickets are on sale now by phone (612-333-6669) or online. Single tickets go on sale in July.

Laurie Hertzel connects the dots between this year’s L.A. Times Books Prize finalists and the Minnesota authors and publishers who made the first cut. They include Wayzata writer Joyce Sidman for “What the Heart Knows: Chants, Charms and Blessings,” U of M grad Ethan Rutherford for “The Peripatetic Coffin and Other Stories,” Graywolf Press, publisher of Percival Everett’s “Percival Everett by Virgil Russell” and Susan Steinberg’s “Spectacle: Stories,” and Coffee House Press, publisher of Ron Padgett’s “Collected Poems.”

Closer to home, tickets are on sale now for the annual Minnesota Book Awards Gala. Last year it was at the Hilton in Minneapolis, and in 2012 at the Crowne Plaza in St. Paul. This year, it bounces back to St. Paul and the newly restored Union Depot, a grand place for a grand event. John Moe, host of MPR’s “Wits,” will emcee, with music by the jazz trio The Willie August Project. It all happens on Saturday, April 5. Tickets here. 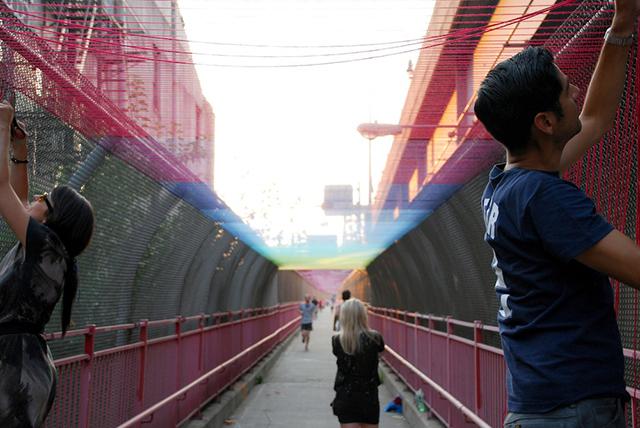 Courtesy of HOTTEA and Northern Spark
HOTTEA, right, works on a site-specific yarn installation on the pedestrian walkway of the Williamsburg Bridge in New York.

Northern Spark 2014 is heating up. Last year, the dusk-to-dawn event took place in St. Paul’s Lowertown, the year before in Minneapolis, and its ambitious inaugural year (2011) happened in both cities. This year, the festival returns to Minneapolis on the night of June 14. Thanks to the Green Line, which is scheduled to open the same day (watch the seconds tick down on the website), St. Paulites will be able to take the train. More than 100 artists have already been commissioned, including HOTTEA, Kate Casanova/Daniel Dean/Ben Moren, and the winner of this year’s Creative City Challenge (whoever that turns out to be). More than 50,000 people are expected to attend events at more than 35 venues. The Walker, the Weisman, Open Book, the Midtown Greenway and others will stay open all night. So will the food trucks. Out-of-towners, this is plenty of notice for you to plan ahead.

We enjoyed reading City Pages’ “50 things to do in the Twin Cities before you die,” and we think you will, too. Of course it includes several arts and culture selections. Our favorites: “See a play. Any play!” (#28) and “Explain Scott Seekins to someone” (#27). Explore Minnesota might want to link to this.

When a young person dies tragically and senselessly — murdered, let’s say, even tortured and murdered — that’s what we remember. Not only is a life lost that might have been; a life lived is forgotten, buried under gruesome details: a brutal beating, a savage lynching, a shot in the head, a mutilated and swollen body found in a river. 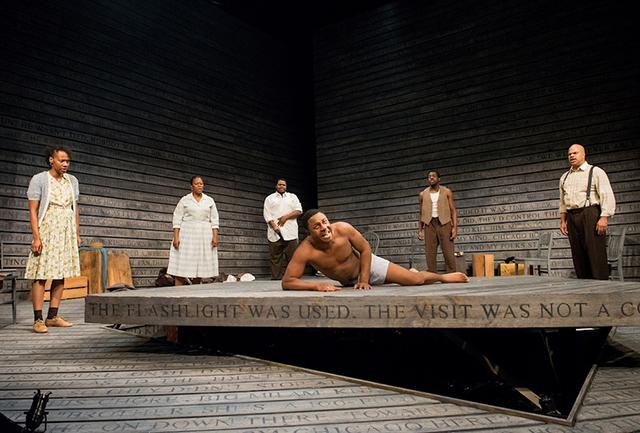 Not so in “The Ballad of Emmett Till,” an award-winning play by Ifa Bayeza now at the Penumbra. Although we know what’s going to happen, and that awareness hangs over the play like a sword none of us will escape, this is largely a celebration of Emmett Till’s life up until the night he was kidnapped from his uncle’s home. Just 14 when he travels from Chicago to Mississippi to visit family, he’s smart. Quick. Funny and lively. Curious, ambitious, garrulous. Proud of his new suit, his Panama hat, and his unscuffed white shoes. His nickname is Bobo. He has a stutter, which he covers up by whistling, which gets him killed. We love watching him, seeing his infectious smile. We want to shout, “Run! Go back to Chicago. Don’t whistle!”

The powerful play is beautifully written by Bayeza, tightly directed by Talvin Wilks and impeccably acted by a small but stellar cast: Greta Oglesby, T. Mychael Rambo, Sha’ Cage, H. Adam Harriss, Mikell Sapp and Darrick Mosley. Mosley has the least experience and the largest role; he’s Till. Sapp recently moved to the Twin Cities and made his Penumbra debut in “SPUNK!” Harris, Cage, Rambo and Oglesby are well-known to Twin Cities audiences. While Mosley plays just the one character, everyone else takes on three or four, shifting names, genders, even races. Changes in scene and time are indicated by words projected on the wall; there is no intermission. The movement of the characters on stage is like watching a dance. The language, the timing and the flow carry you toward the moment when the lights appear in the night, shining through the slatted back walls of the stage, and the shouting begins.

Penumbra decided to stage “The Ballad of Emmett Till” in response to the Trayvon Martin shooting. What do most of us know about 17-year-old Trayvon? That he was wearing a hoodie when he walked through a white neighborhood at night. And, more recently, 17-year-old Jordan Davis? That he played rap music too loud. After “Emmett Till,” you’ll know a great deal more about the young man whose murder (and open-casket funeral) galvanized the civil rights movement. It’s not easy to watch, but it’s not as hard as you think it will be. And strange as it feels to write this, you’ll be glad you saw it, especially as you gain some distance. We can now think about it without wanting to curl into a ball.

This is Penumbra’s first play under co-artistic directors Lou Bellamy and his daughter, Sarah Bellamy, who will take over when her father officially retires in 2017. It’s a thunderclap. It’s Penumbra being Penumbra, frank and unflinching, and a reminder of this theatre’s significance within our community and beyond. Bring Kleenex. And if you wonder about the words on the stage and the walls – visible only briefly when the lights hit them just right, never in their entirety, like a visual whisper – they’re from the chilling and boastful confessions of J.W. Milam and Roy Bryant, Till’s acquitted killers, which were published in Look magazine on Jan. 24, 1956. “The Ballad of Emmett Till” continues through March 2. FMI and tickets ($40).

Friday at the Crowne Plaza St. Paul: Winter Wine Fest. Vintners in France, Italy and California have it easy. It takes real courage and a generous pour of craziness to open a winery in Minnesota. And yet, we have the Alexis Bailly Vineyards, the Cannon River Winery, the Falconer Vineyard, Four Daughters Vineyard and Winery, St. Croix Vineyards, Villa Bellezza Winery and Vineyards, and many more. Go figure. How good are they? See and taste for yourself at this year’s Winter Wine Fest, featuring tastings and local food pairings. 7-10 p.m. Tickets here ($50).

Saturday at the Bloomington Center for the Arts: “The Envelope, Please.” As we count down the days to the Oscars on March 2, Twin Cities singers Arne Fogel and Maud Hixson are putting the final touches on their own night of Oscar winners and nominees: songs like “Call Me Irresponsible” (from “Papa’s Delicate Condition”), “The Days of Wine and Roses,” and “Charade” (which lost to “Call Me Irresponsible”). Sorry, no “Happy” from “Despicable Me 2”; Fogel and Hixson are about the classics. Rick Carlson serves as music director and tickles the keys. 7:30 p.m. Tickets ($24-$16) at 952-563-8575 or online. 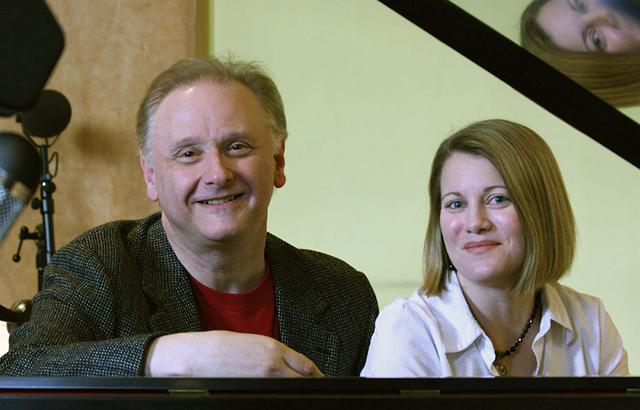 Sunday at Orchestra Hall: Happy 90th, Maestro Stan! This really is one of those once-in-a-lifetime events you might be genuinely sorry to miss. Not only did Stanislaw Skrowaczewski lead the Minnesota Orchestra from 1960 to 1979, not only was the original Orchestra Hall built on his watch, but he stepped up to lead the Musicians of the Minnesota Orchestra during the lockout, and he was the first to do so. (Now it seems like ages ago, but it was Skrowaczewski who conducted the opening night concert the musicians held for themselves at the Convention Center on Oct. 18, 2012.) At his birthday bash, he’ll lead the world premiere of his newest composition for cellist Lynn Harrell and chamber ensemble. Gunther Schuller will conduct a new work he wrote in honor of the Maestro’s birthday. The program also includes world-premiere compositions by John Harbison, Paul Schoenfield and Steven Stucky, plus works by Bruckner and Bach. Minneapolis Mayor Betsy Hodges will speak. Joe Dowling will narrate. And everyone will join in to sing “Happy Birthday.” It’ll be fun — and the Maestro deserves it. 4 p.m. Tickets by phone (651-450-0527) or online.

Thursday, Feb. 27-Saturday, March 1 at the Walker: luciana achugar, “Otro Teatro.” achugar isn’t for everyone. For some, she’s too dark, too sensual, too primal and disquieting. For others, she’s a revelation. Performed with collaborators including Zenon Dance (achugar and Zenon have worked together before), this Walker commission and world premiere is being described as “a trip into a post-apocalyptic world … brimming with rage and desire.” In other words, not your everyday dance performance. Contains nudity. FMI and tickets.

Thursday, March 6-Sunday, March 9: The Sixth Annual Italian Film Festival. A curated set of contemporary Italian feature films presented by the Italian Cultural Center of St. Paul. Highlights include a documentary about the realities of Venice’s declining population and a humorous film about a lifelong friendship with Federico Fellini. Although these films won important awards in Europe, they will have very limited showings in the U.S.; many will have their Midwest premieres here. Stay for the post-film discussions. Preview night (Thursday) is at the Minneapolis Institute of Arts; the rest of the festival is at the Film Society’s St. Anthony Main Theatre. FMI and tickets.