While other theaters announce a season, Park Square has alerted us to the imminent arrival of a thundering herd of plays. With its 200-seat Andy Boss Thrust Stage due to open in September, Park Square’s ambitious 2014-15 plans include 19 projects on two stages.

Sadly, Andy Boss, a longtime supporter of the arts for whom the new thrust stage was named, died last week.

Coming soon, something completely different. In their first-ever collaboration, Augsburg College and the University of Minnesota will stage a site-specific production of Ibsen’s “Peer Gynt” at the U’s Landscape Arboretum in April. Provided the snow is gone by then (sorry, bad joke … or is it?), performers and playgoers will travel a quarter mile on a voyage that includes oversized birds and trolls, original music and simultaneous scenes. The 90-minute play, condensed from poet Robert Bly’s three-hour script, features a student cast of nearly 40 and is being co-directed by Augsburg’s Darcey Engen and the U’s Luverne Seifert. Seven performances, April 10-13. FMI and tickets. 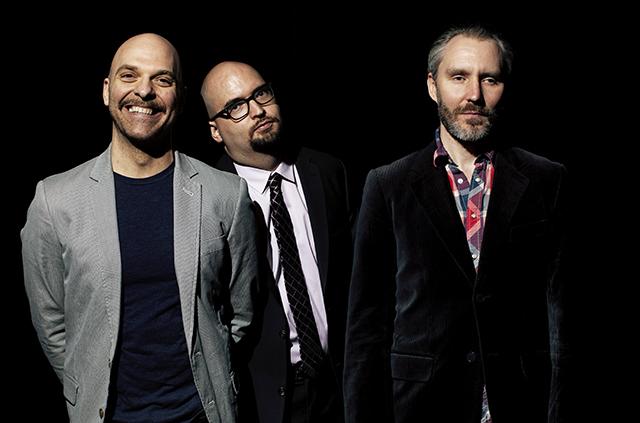 Courtesy of The Bad Plus/Cameron Wittig
The Bad Plus: Dave King, Ethan Iverson and Reid Anderson

Are you dying to hear the new recording of Stravinsky’s “The Rite of Spring” by The Bad Plus? Due out March 25 on Sony Masterworks, it’s a remarkable distillation (from large orchestra down to three very hard-working musicians) and a unique interpretation; it’s still Stravinsky but also The Bad Plus, a trio with its own sound, point of view, history and dynamic. Some of us heard TBP perform the Rite live at the Loring Theatre (formerly the Music Box, now the Music Box again) in 2011 and the Dakota this past Christmas. The recording brings you closer to Reid Anderson’s seductive introduction, the smashing finale, elaborated with a joyous quote from the group’s own composition “Physical Cities,” and every note in between, pristine and crystalline. This week, you can listen for free at NPR.

You know you want to, and now you can: Nominate your favorite cat video(s) for the Walker’s 2014 Internet Cat Video Festival. After a year at the Fair, this year’s fest returns to the Walker’s big lawn as a free community event on Thursday, Aug. 14.

Now playing at the Lab, Theater Latté Da’s “Our Town” is a hand on your heart. Unless you enter the theater steeled against Thornton Wilder’s small-town characters and universal truths (and if that’s the case, why go?), you will be touched by director Peter Rothstein’s tender staging of this American masterpiece. Everything works together to make the magic happen: the diverse cast, led by Wendy Lehr as stage manager; the ultra-simple sets, a few pieces of furniture covered in silvery paint; Trevor Bowen’s street-clothes costumes; the long, mostly bare stage; and Marcus Dilliard’s lighting, which includes dozens of small pendant lamps that rise and fall, sometimes becoming lights over imaginary kitchen tables, sometimes rain, sometimes a sky full of stars. Rothstein and music director Denise Prosek have added live music – not to the play itself, but to the 15 minutes or so before it begins and during both intermissions. A sepia-toned soundtrack of American popular songs (“Beautiful Dreamer,” “Grandfather’s Clock,” “Aura Lee”), the music ties the three acts together and holds us close to the play until it ends. Also added: occasional sound effects. A cast member seated next to us clucked like a chicken; another stirred a spoon in a cup, and a trumpet stood in for a horse’s neigh. If you go to the theater to be entertained, to be moved, and to be left with plenty to think about afterwards, “Our Town” satisfies. Especially if the last time you saw it was in high school, you’ll be surprised by how much it has to tell you about life, death, love, and paying attention. Through April 6. FMI and tickets ($35-$45). 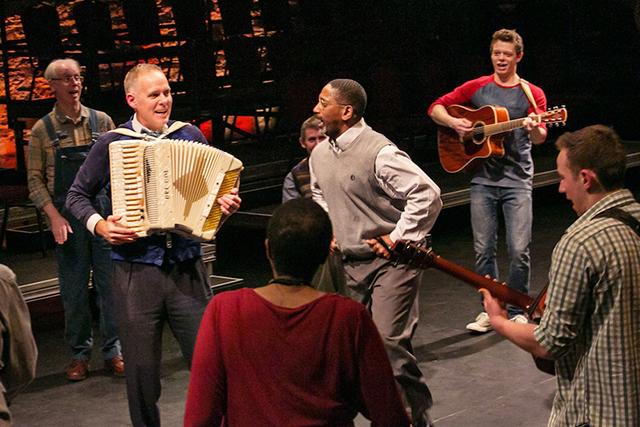 A little over a mile away, a completely different play opened Friday at the Guthrie: Shakespeare’s mighty “Othello.” Marion McClinton directs a traditional, no-funny-business telling of the tragedy that begins in pique and ends in murder. As Othello, Peter Macon has the physical size, gravitas, and mahogany voice the title role demands. Although a virtuous woman seldom makes a very interesting character, Tracey Maloney imbues Desdemona with radiant grace. As Iago, Peter Yoakum is a menacing, tightly wound spring, manipulating others to suit his own needs, which are never quite clear. What does he think will happen once he topples Othello? He is not going to get that promotion. Marjorie Bradley Kellogg’s set is spacious and stony, sound designer Scott W. Edwards adds ominous booms in all the right places, and Esosa’s costumes are sweeping and grand. (BTW, Esosa is short for Emilio Sosa, whom some of us will remember from “Project Runway.”) Something we didn’t expect: that Regina Marie Williams as Iago’s wife, Emilia, would almost steal the play. Her scene near the end, when she realizes what her husband has done and gives him what for, is a comet across the sky. “Othello” is almost three hours long, including one intermission, and the first part drags a bit. It’s also sometimes hard to understand. Still, we rarely get to see this big play live, and here it is, through April 20. FMI and tickets ($29-$71).

The current Cantus concert program, “Dvorák: Going Home,” is part music, part storytelling, and sublime. The nine full-time musicians sing like angels and make it all look easy, whether they’re performing in English, Russian or Czech. Between songs by Dvorák, Brahms (“May Night”), Wagner (“Pilgrims’ Chorus”), Tchaikovsky, Janácek, George Gershwin and Aaron Copland, they take turns reading aloud from letters written to and by Dvorák, who came to America in 1891 to serve as artistic director for the National Conservatory of Music in New York. In 1893, he visited the Twin Cities, spent an hour “in amazement” at Minnehaha Falls, and wrote a melody on his shirt cuff. Also on the program: African American spirituals and the world premiere of “Eventide,” a new work by Byron Adams based on a poem by Henry Wadsworth Longfellow. Adams was in the audience on Thursday and must have been pleased to hear Longfellow’s words come true: “Such songs have power to quiet/The restless pulse of care/And come like the benediction/That follows after prayer.” Cantus is an a cappella ensemble, but for part of this program, former Carleton College faculty member Kenneth Huber plays piano. Huber is a sensitive and lyrical accompanist; we especially enjoyed his work on “Three Male Choruses” in the second half. The concert has a killer closer: Dvorák’s “Goin’ Home” featuring soloist Shahzore Shah. Bring a hankie. Only two more chances remain to see this program: Thursday, March 20, at 11 a.m. at Colonial Church of Edina, and Sunday, March 23, at 3 p.m. at Saint Bartholomew Catholic Church in Wayzata. Tickets here ($25/$10).

Artscape is taking a break and will return next Friday, March 28.

Tomorrow (Wednesday, March 19), for musicians and interested others: “The Do’s and Don’ts of DIY Booking.” A workshop featuring a panel of bookers, artists and agents including Nate Kranz (First Ave, 7th Street Entry), Sage Dahlen (the Cedar), Michael McGregor (Hello! Booking), Dana Thompson (Aster), and songwriter Martin Devaney. All ages, pay what you can. Kindly RSVP to ellen@mnmusiccoalition.org / 651-347-1MMC (1662). A program of the Minnesota Music Coalition.

Photo by Dan Norman
Director Peter C. Brosius with Dean Holt as Scarecrow and Brandon Brooks as the servant, Jack.

Thursday at the Children’s Theatre: “The Scarecrow and His Servant.” We haven’t seen this yet, but we’re hearing very good things about it. Adapted by Jeffrey Hatcher from the novel by Philip Pullman (author of the “Dark Materials” trilogy), directed by Peter Brosius, it’s a physical comedy featuring Dean Holt on stilts with a turnip for a head. Holt is the Scarecrow, who comes to life when struck by lightning; his “Servant,” Jack (Brandon Brooks), is a young orphan boy. They set out together on a picaresque journey through the Italian countryside. This is a world premiere for CTC. FMI and tickets. Through April 6.

Friday and Saturday at the SPCO Center: Timo Andres: “Work Songs.” The latest installment in the SPCO’s inventive, in-the-moment, ridiculously inexpensive “Liquid Music” series features composer Andres and friends including Gabriel Kahane, Ted Hearne, Nathan Koci and Becca Stevens in a program of vocal chamber music. We like what area singer-songwriter/Honeydogs frontman Adam Levy said about this: “Old school classical, folk, contemporary classical, and singer-songwriter worlds co-exist well with this posse.” Series curator Kate Nordstrum considers this “a clear highlight” of the season, and she’s not just saying’. Here are Kahane and Andres playing some four-handed Bach. 8 p.m. FMI and tickets ($10!!!). On Thursday, everyone will gather at the Amsterdam for a Composer Conversation with Classical MPR. 7 p.m. Free, but reservations are required.

Friday through Sunday: A John Rutter Jubilee. Celebrating the dean of British choral composers, the 100-voice VocalEssence Chorus and the 32-voice Ensemble Singers will perform two concerts at Central Lutheran Church on Friday, March 21 at 8 p.m. and Sunday, March 23 at 4 p.m. FMI and tickets ($20-$40). Rutter was originally scheduled to conduct but has curtailed international travel under doctor’s orders as he recovers from a short-term illness. If you can, arrive an hour early to either performance for a Concert Conversation with conductor Phillip Brunelle and MPR’s John Birge. On Saturday morning, March 22, Brunelle will lead a John Rutter Community Sing at Hennepin Ave. United Methodist Church. Come. Sing. Forget the wretched, interminable winter as you bask in the warm and sunny glow of Rutter’s music. FMI and tickets ($25; includes sheet music). Rutter will talk about each piece through prerecorded audio intros.

Opens Saturday at the Bedlam Lowertown: “You.” Minneapolis-based choreographer Morgan Thorson’s latest work explores the social dynamics between dancers in an ensemble – the things they learn about each other, the tricks they practice so they can move together – and the connections between performer and viewer. The dance slowly composes itself. Created especially for Bedlam’s new space across from Union Depot. 8 p.m. Saturday. Through March 28. FMI and tickets ($12, $18, and pay-what-you-can).