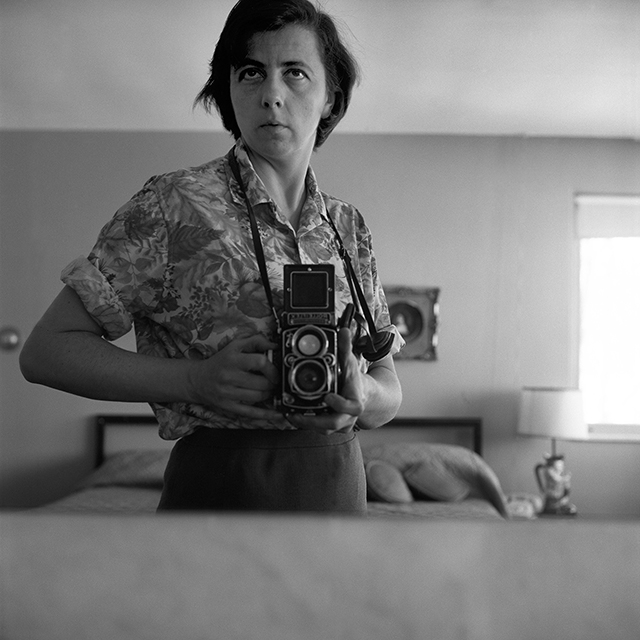 If you missed the much-ballyhooed Vivian Maier photography exhibition at the Mpls Photo Center, which closed March 1, don’t despair. Maier’s work now has a permanent home at the Photo Center in its very own gallery, opening March 14. The Photo Center will have its own collection of 55 prints and many new prints that have never before been exhibited.

The Maier show’s backstory is as intriguing as the photos, mostly black-and-white images of Chicago streets and neighborhoods taken during the 1950s to 1970s. Born in New York in 1926 to a French mother and absent Austrian father, Maier grew up in France, returned to the States at 25, and spent much of her life working as a nanny in Chicago, where she wandered the streets with a slow, boxy medium-format Rolleiflex camera at her waist. Self-taught, eccentric and elusive, she rented storage lockers for her possessions, which included more than 100,000 negatives and thousands of rolls of undeveloped film. Later in life, when Maier could no longer pay the rent on the lockers, their contents went up for auction, and a young real-estate agent looking for vintage photos bought a box. You can read more of Maier’s story when the Minneapolis gallery’s website goes live later this month.

The Minneapolis Theater Garage will have a new 150-seat home at the corner of Lyndale and Franklin, if a proposal for a six-story residential/commercial/parking garage/rooftop park development wins city approval. The Theatre Garage, currently a 136-seat venue, has hosted companies that include the Walking Shadow Theatre Company, Torch Theater, Freshwater Theatre and 20% Theatre. The proposed name of the proposed development is the Theatre Garage and Marquee Apartments. Read more about it and see plans and renderings here. 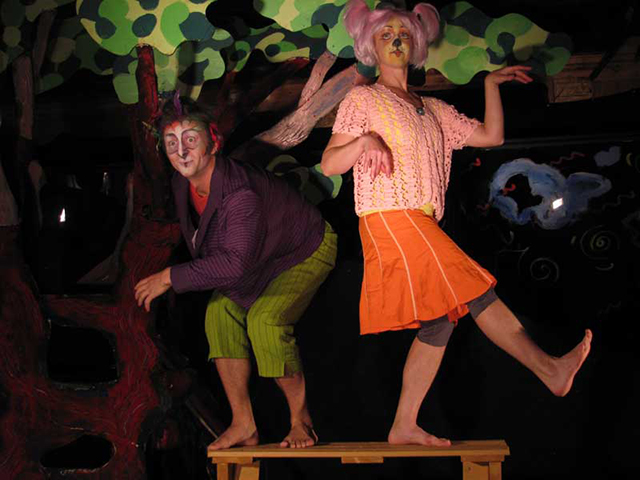 On the topic of theaters and garages, Off-Leash Area is seeking hosts for their Fifth Annual Neighborhood Garage Tour. If you live in the suburbs of Minneapolis and St. Paul; if you enjoy the performing arts; if you have a large garage, barn or similar space; and if you want to do something terrific for your friends, family, neighbors and community, give this a thought. (Notice that’s only four “ifs” and not one of them asks you to open your wallet.) Off-Leash Area’s new family-friendly production, “Stripe & Spot (Learn to) Get Along,” takes place between August and October, touring neighborhoods through the metro area. The company describes it as “a humorous and ridiculous parable about human resourcefulness, greed, and finally cooperation.” There’s a shipwreck, a battle, a rotating stage, original choreography and music, vaudevillian dance numbers and silent-film melodrama. Silly fun with a message and good times for all. Visit the website FMI and/or call 612-724-7372. Founded in Minneapolis in 1999, Off-Leash Area is an Ivey and Sage Award-winning contemporary dance and theatre company. The Theatre Garage Tour is supported by Legacy funds.

St. Paul’s Park Square Theatre has thrown open its doors to Girl Friday Productions, Sandbox Theatre and Theatre Pro Rata. Starting in spring 2015 and continuing through the next three years, Sandbox and Pro Rata will produce one show each season on Park Square’s new Andy Boss Thrust Stage and Girl Friday will produce every other year. “This partnership is more than just a seasonal rental,” Park Square’s artistic director Richard Cook said in a statement. The companies will function as an informal joint mentorship, producing work alongside each other and building audiences together. “I wanted the Boss Stage to offer today’s young producers what I wished for in my early days here — the change to develop faster and more efficiently with practical peer learning instead of just working by trial and error … I want this theatre to become a truly 21st century organization, and that can only happen as the next generation of theatre makers and theatre goers grow up here together.” Cook’s hope is that when these initial partnerships end, Park Square will work with a new group. This sounds like a win-win all around.

And let’s not forget that a $1 million grant from the Knight Foundation, announced earlier this year, will subsidize productions by emerging and mid-range performing arts groups at the Ordway’s new Concert Hall when it opens in spring 2015. Giving small, cash-strapped organizations chances to strut their stuff in state-of-the-art venues makes everyone look good.

We were away for a few days, crossing our fingers that when we returned the Minnesota Orchestra board, which met last Friday, would have made some decisions about former music director Osmo Vänskä and current president and CEO Michael Henson. According to the musicians and many members of the public, Vänskä should return and Henson should leave. Vänskä has said that “for any healing to begin at the orchestra, Michael Henson must go,” implying that the two would not play well together. Newly elected board chair Gordon Sprenger has publicly praised Henson’s “very, very good, outstanding leadership.”

In a statement made after Friday’s meeting, Sprenger said that “the board came to very strong agreement on leadership and a positive direction for the organization. However, we have more work to do before we are able to make a detailed public statement. We will share further news as soon as we are able.” The New York Times called this “a perplexing turn of events.” In stronger words, Drew McManus wrote in his Adaptistration blog, “It is difficult to imagine a clearer sign that the dysfunction within the Minnesota Orchestra Association’s board is far from over and the reported divisiveness, not to mention resulting inaction … is about as dire of an omen one could imagine at this point.” We’re avoiding the D-words, but we can’t help but wonder how “very strong agreement” means “we’ll get back to you later.”

Last week we learned that Minnesota Orchestra associate conductor Courtney Lewis has been named assistant conductor for the New York Philharmonic. He’ll take his new post effective in September, after his current contract with the MOA ends. Lewis became the Minnesota Orchestra’s associate conductor in Sept. 2010, after serving as assistant conductor for a year. You can catch him at several Young People’s, Friends & Family and Sommerfest concerts in the 2014 season; in June, he’ll return to the classical subscription series to conduct Mahler’s Fifth. A rising star in the classical music world, Lewis, still just 29, made his major American orchestral debut in 2008 with the St. Louis Symphony. So now the Minnesota Orchestra will also presumably be looking for an associate conductor.

Tuesday at the Walker: Lance Wyman. The legendary New York designer begins the Walker’s Insights 2014 Design Lecture Series, a must for anyone interested in graphic design, branding, identity, memory, culture and why our world looks the way it does. Wyman combines the art of branding and the science of way-finding design to create massive systems for cities, airports, expos, transit systems, zoos, and museums — like the Mexico Olympics, the Washington, D.C., Metro map, and the original moose logo and way-finding signage for our own Minnesota Zoo. 7 p.m. in the Walker Cinema ($24-$10). Call 612-365-7600. The series continues with London’s Sara De Bondt (March 11), Los Angeles’ Martine Syms (March 18) and Stockholm’s Henrk Nygren (March 25). 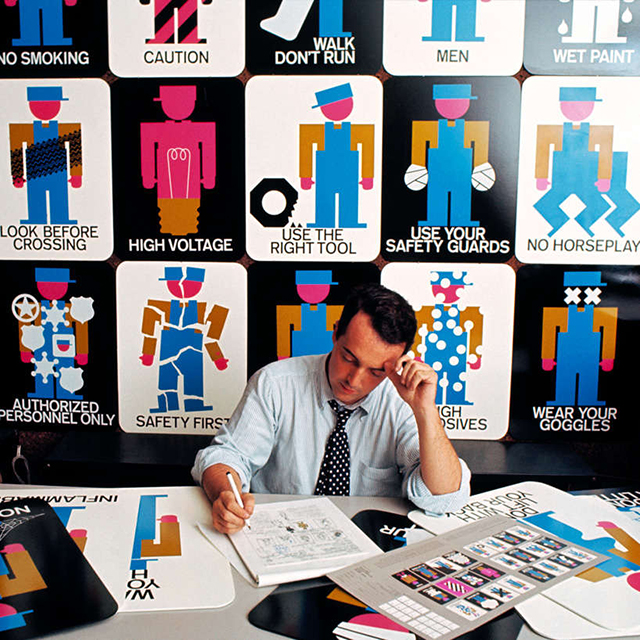 Wednesday at SubText: “Abraham Lincoln in the Kitchen: A Culinary View of Lincoln’s Life and Times.” What type of barbecue could be served to thousands at political rallies in the days before paper plates and napkins? What gingerbread recipe could have been Lincoln’s favorite? What did Honest Abe pay for groceries? If you believe that we are what we eat, you’ll enjoy hearing author Rae Katherine Eighmey present her “culinary biography” of our 16th president. Eighmey is an authority on 19th and early 20th century Midwestern cookery. 7 p.m. Free and open to the public.

Thursday at Orchestra Hall: Andrew Litton and Stephen Hough. Very high awesomeness potential here as the musicians of the Minnesota Orchestra are joined by Litton, its effervescent Sommerfest conductor, and the certifiably brilliant Hough, a concert pianist, composer, author, blogger and MacArthur Genius Grant winner. (As if that weren’t enough, The Economist named him one of 20 Living Polymaths.) We saw Hough play for the Schubert Club in November 2012 and that became one of our favorite concerts of the year. The program begins with Rachmaninoff’s “The Rock,” after which Hough takes the bench for Rachmaninoff’s “Rhapsody on a Theme of Paganini” and Prokofiev’s Symphony No. 4. 11 a.m. Also Friday and Saturday at 8 p.m. FMI and tickets ($22-$55). Litton’s prediction: “Passion, virtuosity, and a thrill-ride of daredevil music-making!”

Thursday at Roosevelt Library in Minneapolis: First Pages for Adults: Writing Your Life. Justin Bieber published his autobiography at age 16, so what are you waiting for? In all seriousness, we know a lot of grown-ups who often speak of wanting to write about their lives. Whether your plan is to preserve memories for your children or someday publish a book, you have to start somewhere, and this 90-minute class may be just the kick in the pants you need. 6:30-8 p.m., free. Register online or call 612-543-6700. This is one of many writing classes being offered at area libraries, presented in collaboration with the writing experts at the Loft and funded with Legacy money. See the whole list starting here.

Thursday at SubText: Congressman Keith Ellison discusses and signs “My Country, ’tis of Thee.” The first memoir by the first Muslim elected to Congress includes family anecdotes, his “melting-pot” ancestry, personal recollections, his conversion to Islam, his belief in the separation of church and state, and his dream of an America undivided by petty hatred and bigotry and kept strong by unity. 7 p.m. Free and open to the public.