Northrop threw a party on Friday night, and it was one for the state history books. For the Grand Reopening of the venerable auditorium on the U of M campus, black tie was optional, and people dressed up – in Minnesota, with snow still on the ground. After three years of demolition and construction, the big house sparkled and gleamed, tempting curious crowds down its wide halls and up its curving staircases, through the new lobby and into more brand-new spaces: an art gallery, a small theater tucked behind the main auditorium, lounges, crossover bridges with dramatic views.

The spectacular new hall drew gasps as people entered to take their roomy seats for the evening’s performance of “Giselle” by the American Ballet Theatre. A romantic story of unfulfilled love, broken hearts, and tormented spirits, accompanied by live orchestra in the new pit below the stage, the classical ballet was the ideal inaugural event, serious and stately. (One comment: Maybe because of the new and vastly improved acoustics, the stage seemed a bit noisy. Especially during the second act, the dancers sounded like a herd of ponies. Very small ponies, dressed in gauzy white, wafting back and forth on tippy-toe.) Remember the boxy and immense old Northrop? The new Northrop is curvy and almost cozy for a space that still seats 2,700. 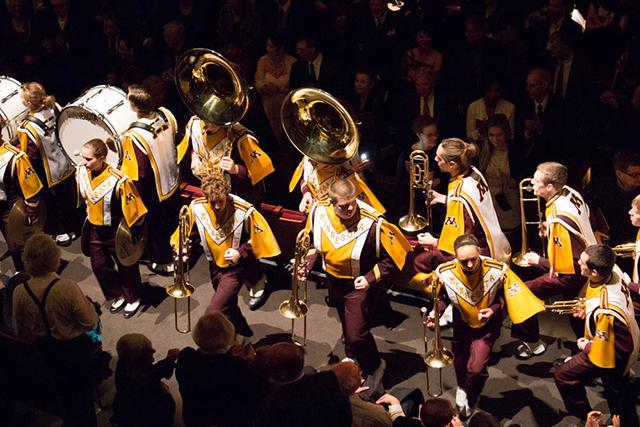 Photo by John Whiting
When the ballet was over, a whistle sounded and in came Goldy Gopher and the U of M Marching Band.

When the ballet was over, the bows taken, the curtain lowered and the lights raised, a whistle sounded and in came Goldy Gopher and the U of M Marching Band. A delightful surprise for which the crowd went wild. The dancing continued at an after-party in the lobby with music by Davina and the Vagabonds. Coming up at Northrop: dozens of events including films, lectures, performances and discussions. Many are free. Announced Monday: the iconic rock band The Moody Blues will play there Aug. 26. Tickets go on sale to the public Saturday and to Northrop’s Facebook friends on Friday. Time to click that Like button.

The Minnesota Book Awards threw a party on Saturday night: its 26th annual celebration of readers and writers. Held at another restored and polished historic space, Union Depot in St. Paul, the gala drew a crowd of 960 – so many that if you were seated along the edges, you had to watch on a big screen, because the people at the podium were the size of crickets.

Also among the night’s winners were Melanie Hoffert for “Prairie Silence” (memoir and creative nonfiction), Minnesota Museum of American Art executive director Kristin Makholm for “Modern Spirit: The Art of George Morrison” (Minnesota category), Ethan Rutherford for “The Peripatetic Coffin and Other Stories” (novel/short story), Matt Rasmussen for “Black Aperture” (poetry), and Carrie Mesrobian for “Sex & Violence” (young people’s literature). Rasmussen acknowledged an early mentor who scolded, “Why don’t you write a poem with some personal investment for once?” Rutherford vowed to name his new baby (due any moment) “Minnesota Book Award.” Mesrobian called her editor at Lerner “a real peach.” And John Moe, the “Wits” host who served as emcee, kept things moving and the mood light.

Mark Vinz received the previously announced Kay Sexton Award for his lifelong contributions to Minnesota’s literary community; he humbly said, “Pretty neat for a kid who grew up in Dinkytown.” Other winners announced prior to the gala picked up their awards: Catherine Phil MacCarthy of Dublin, recipient of the 2014 Lawrence O’Shaughnessy Award for Irish Poetry; Carleton professor Fred Hagstrom, who was honored with this year’s Book Artist Award; and Gwen Westerman and Bruce White for “Mni Sota Makoce: The Land of the Dakota,” winners of the Hognander Minnesota History Award.

Not to rush summer – our fear as Minnesotans is that winter, finally receding (we hope), will give way to spring, which will last 24 hours before the temperatures rise, the humidity soars, and the mosquitoes hatch – but we now know the first shows booked for this year’s Music in the Zoo series, a beloved seasonal ritual for many. Shows we really like: The Monkees (June 2), Aaron Neville (June 19), Rufus Wainwright solo (June 24), banjo genius Béla Fleck with the Brooklyn Rider String Quartet (July 3), Lyle Lovett and His Large Band (Aug. 3), Trombone Shorty & Orleans Avenue (Aug. 6). Tickets on sale Saturday, April 26, at the Electric Fetus in Minneapolis, the series website, and etix. Tickets range (so far) from $20-$70.

The State Fair has announced three new grandstand acts: country superstar Tim McGraw on Wednesday, Aug. 27, DigiFest Minnesota on Sunday, Aug. 24, and “A Prairie Home Companion” with Garrison Keillor on Friday, Aug. 29. Tickets go on sale this Saturday, April 12, at 10 a.m., 11 a.m., and 12 noon, respectively. You may be asking, “What the heck is DigiFest”? We looked it up so you don’t have to. It’s a pop concert of YouTube stars featuring Fifth Harmony (five girls) and Cimorelli (six sisters), both with their own YouTube channels. And now you know.

The Minnesota Dance Theatre has a new board of directors. MDT had been boardless since Jan. 28, when its board at the time abruptly resigned en masse. The company was midway through a series of performances at the Lab Theater when the board issued a statement saying that it was “no longer able to serve the needs of the organization going forward.” MDT has also hired former dancer Elizabeth Simonson as its new director of development and communications. The 2014-15 season will be announced in May.

Violinist Cliff Brunzell has died. Many Twin Cities fine dining and music fans will remember the Golden Strings, who played at the Flame Room in the downtown Minneapolis Radisson in the 1960s and ’70s. Brunzell formed the group and led it for more than 18 years. He also played with the Minneapolis Symphony and, later in life, jazz. We last heard him play in 2012, at a memorial tribute to fellow symphony member Elliott Fine. Visitation is Thursday from 4 – 7 p.m. at Washburn-McReavy in Edina. The service is Friday at 11 a.m. at Lutheran Church of the Good Shepherd in Minneapolis.

Tonight and tomorrow at the Walker: “Intuitive Expression: A Brad Mehldau Celebration.”  Two nights, two different sides of the great jazz pianist. Tuesday features a US exclusive 2014 engagement of Mehldau’s collaboration with Nickel Creek mandolinist and singer Chris Thile. On Wednesday, Mehldau returns with his trio, one of the best working anywhere in the world today. With Larry Grenadier on bass, Jeff Ballard on drums. 8 p.m. both nights. FMI. Limited seating and standing room ($30-$38); call the box office at 612-375-7600.

Wednesday at the American Swedish Institute: “A Night of Social Wonder: Artists Finding Solutions to Seemingly Insoluble Problems.” The second in an occasional series of public conversations about the arts that began last October. This time the panel includes Matthew Shalin, a paper artist and designer who is working with scientists at the University of Michigan to solve energy harvesting issues; John Davis of the Lanesboro Art Center; Noel Raymond of the Pillsbury House + Theatre; and Janet Koplos, journalist and art critic. The American Craft Council is co-presenter; the Current’s Mark Wheat moderates. We went to the first one and liked it. Tickets ($10-$12) online or call 612-871-4907.

Wednesday at Northrop: An Evening with David Mitchell. The author of “Cloud Atlas,” “Black Swan Green,” “The Thousand Autumns of Jacob de Zoet,” and “Ghostwritten” will give the Esther Freier Endowed Lecture in Literature. Hear a great author speak and see the new performance hall. 7:30 p.m. A book signing and reception follow in the lobby. Free and open to the public. FMI. 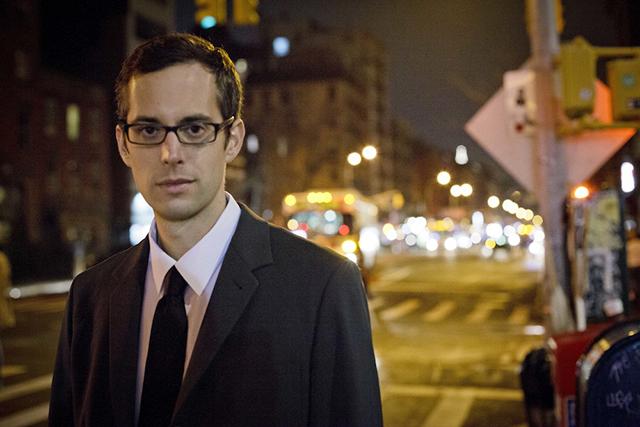 Photo by Johanna O’Toole
Wednesday and Thursday at the Landmark Center: Matt Slocum

Wednesday and Thursday at the Landmark Center: Matt Slocum. Born in St. Paul, raised in western Wisconsin, New York-based drummer Slocum has earned raves and respect for his thoughtful, intelligent playing and compositions. His latest CD, “Black Elk’s Dream,” was inspired by the book “Black Elk Speaks” and tells the story in melody, mood, and flowing mixed meters. It’s beautiful – in our experience, well worth repeated close listens. On Wednesday, Slocum will play two sets, the first with his former drum instructor Phil Hey and Hey’s quartet (dual drums!), the second with his own trio featuring Sam Yahel on keys, Massimo Biolcati on bass. Thursday will be a triple-header: an opening set by pianist Bryan Nichols, then Slocum’s trio, then Dave Karr’s quartet with Chris Lomheim and Hey. FMI and tickets ($10-$18).

Thursday at the Westminster Town Hall Forum: Reza Aslan: In Search of Jesus. The latest book by the Iranian-American religious scholar and author, “Zealot: The Life and Times of Jesus of Nazareth,” zoomed to No. 1 on the New York Times bestseller list, thanks in part to a now notorious interview by Fox News. The Westminster audience will be way more knowledgeable and civil. Doors at 11 a.m., program at noon at Westminster Presbyterian Church in Minneapolis. Free and open to the public.

Our Film Festival picks for the week

Wednesday at the new Best Buy Theatre in Northrop Auditorium: “Wicker Kittens.” Have you ever worked a jigsaw puzzle? Who hasn’t? This film about competitive jigsaw puzzlers was made in Minnesota during the St. Paul Winter Carnival, where the top teams in the game gather each year. Who knew? Filmmaker Amy C. Elliott will be in attendance. 5:45 p.m. Also Tuesday, April 8 at the St.. Anthony Main Theater, 7 p.m.

Northrop’s Grand Reopening: one for the history books