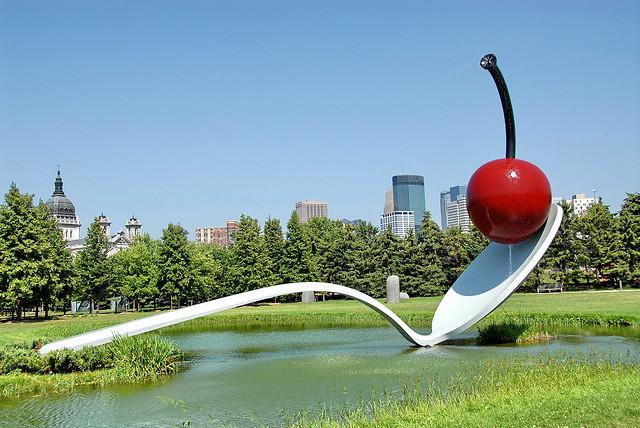 The arts advocacy and watchdog organization Minnesota Citizens for the Arts reports that our “strange and very brief” legislative session was a winner for the arts. Nine arts projects were funded in the state bonding bill, instead of the usual one or two. Winners include the Minneapolis Sculpture Garden ($8.5 million), Duluth’s NorShor Theater ($6.9 million), Chatfield Center for the Arts ($5.3 million), the Palace Theater in St. Paul ($5 million) and the Ordway ($4 million). In addition to these arts-specific projects, the St. Paul Children’s Museum received $14 million, and money will go to rehabbing the Rochester Civic Center, which is used by some nonprofit arts organizations. MCA notes that “the success of this many arts projects is due to arts advocate Rep. Alice Hausman, chair of the bonding committee, who made several speeches about her belief that the arts revitalize downtowns in every corner of the state.” Now all we need is the governor’s signature.

In another acknowledgment that the arts matter, the White House announced Tuesday that 35 schools across the country — including four in Minnesota — will participate in the expanded Turnaround Arts program, which brings arts education into low-performing schools. The Perpich Center for Arts Education will manage the program, and the four participating Minnesota schools will be named this summer. Celebrities Sarah Jessica Parker, Citizen Cope (songwriter/performer Clarence Greenwood) and actor/singer Doc Shaw will “adopt” and visit the schools. A program of the President’s Committee on the Arts and the Humanities — funded nationally by the U.S. Department of Education, the NEA, the Ford Foundation, and other private foundations and companies, and in Minnesota by the Legislature and the Minnesota State Arts Board — Turnaround Arts brings arts and music teachers, teaching artists, art supplies and musical instruments into schools and supports arts integration into core subject areas such as reading, math and science. Sen. Richard Cohen, DFL-St. Paul, who has served on the President’s Committee since 2009, said in a statement: “We have extensive research suggesting the correlation between arts education and academic achievement … . It is significant and can truly turn around a school’s trajectory. It’s very rewarding to know that four Minnesota schools are going to benefit from this program.” We could say something here about how the arts have been systematically stripped from our schools over the past several years, but we won’t.

There’s regular mini-golf, and – only in Minnesota, as far as we know – there’s Artist-Designed Mini Golf. Just north of the Walker’s Open Field and west of the Minneapolis Sculpture Garden, 18 holes are open now through Sept. 1. Forget the windmills and tiki heads; this is the Walker, where Astroturf is a medium and putting is a means of enlightenment. One hole references Marcel Duchamp; another “merges multiple meanings of transcendence” with colorful, glittery fiberglass rocks. (If you’re wondering, sculptor Aaron Dysart’s “Rock! Garden.” predates Jim Hodges’ stainless-steel-clad boulders in the Open Field). There’s a giant gumball machine, a mirrored, tilting maze that takes skill and muscle to navigate, a cemetery, a curling sheet, a pool table, a foosball hole with garden gnome strikers, a hole that maps the summer sky, a hole that employs Heisenberg’s Uncertainty Principle, a gopher hole and a snake in the grass. “Holey Lighted,” a canopy of pierced and folded steel created by Jeffrey Pauling and Tyler Whitehead, calls into question the nature of nature — so convincingly that a robin has built a nest in it. Look up to see her sitting on her eggs, and later, baby birds. Open every day except June 20-22. Thursday-Saturday 10 a.m.-10 p.m., Sunday-Wednesday 10 a.m.-8 p.m. Nine holes, $12-$9; all 18, $15-$13.50. Kids 6 and under free with a paid adult. Every ticket includes free gallery admission. FMI.

Each year a limited number of art lovers have the opportunity to buy original art by Minnesota artists at a bargain. Inspired by the Community Supported Agriculture model of investing in local food, Community Supported Art (CSA) commissions artists to create an edition of 50 pieces of art, which are then sold to 50 shareholders. The art is distributed at pickup events that double as meet-and-greets. Shares for this year’s big box of surprises and treats go on sale Wednesday, May 28, at 10 a.m. for $350. All of the artists have participated in previous seasons. They include painters Jennifer Davis and Alex Kuno, fabric artist Nou Ka Yang, sculptors Aaron Dysart (the same Aaron Dysart with a hole in Artist-Designed Mini Golf) and Karl Unnasch, the writer/painter collaboration John Jodzio and Laura Andrews, printmaker Amu Rice, multimedia artist Kao Lee Thao, and ceramicist Ginny Sims. The pickup party will be held at Bedlam Lowertown on Aug. 28. 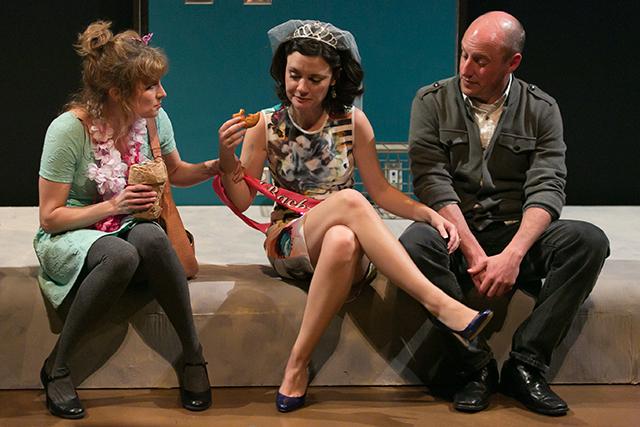 While some theater companies are great ships — the Guthrie, for example, or the Goodman in Chicago — Dark & Stormy is a cigarette boat: sleek, speedy and sexy. Without a permanent home, it moves from place to place, seeking and exploiting unconventional venues: the Miller Bag Building, a vacant office at the Traffic Zone Center for Visual Art, and, at the moment, a party room in an apartment building on the Green Line, where it’s presenting the regional premiere of Adam Bock’s play “Drunken City.” Using the simplest of sets — a raised platform that serves as stage, seating and city sidewalk — the cast of six tells a 75-minute story of modern love. No intermission. Arrive late and you’re out of luck.

Marnie (Sara Marsh), Linda (Tracy Maloney) and Melissa (Adelin Phelps) are three young BFFs on the cusp of change: they’re all engaged to be married. Three weeks later, one engagement (Melissa’s) has already fizzled, but they’re out together for a final bachelorette blowout in Marnie’s honor. And they’re all toasted. Drunken, in the city, and on the loose; we’ve seen women just like them whooping it up in Uptown. Her inhibitions lowered, the bride-to-be locks lips with Frank (Kris L. Nelson), a chance encounter, whose wingman, Eddie (Paul de Cordova), is a tap-dancing dentist. And then there’s Bob (Benjamin McGovern), the gay baker, summoned by Melissa to bring Marnie to her senses. It’s not the Great American Play — if it were, it would be a lot longer — but it feels real, and serious enough, and it sharply illuminates how tricky love can be, and how easy it is to fool ourselves into thinking we’ve found it.

“Drunken City” is Dark & Stormy’s second play by Bock (third, if you count a staged reading last year of “The Thugs” at the Casket Arts Building), and Marsh et al. have mastered the playwright’s idiosyncratic language style: sentence fragments, lack of punctuation, repeated words. It’s a talky play — almost all talk, with kissing and a few punches on the arm. When it’s over, if you say something to the person seated next to you, you may find yourself speaking quickly, in bits and shards. Reasons to go: fine acting by the talented, experienced cast, a company signature; Bill McCallum’s seamless, lively staging; Mary Shabatura’s lighting and sound; and because it’s worth following Dark & Stormy, literally and figuratively. What’s next? Where? We’re eager to know. This is a company with a lot of creativity, energy and passion; it’s exciting to share a space with them, whatever that space might be. Through June 7. FMI and tickets ($15-$25).

Our picks for the holiday weekend plus

Note: Artscape is taking Tuesday off and will return May 30.

Opens tonight (Friday, May 23) at the Edina Theater: “The German Doctor.” Last June, Minnesotans were shocked to learn of an alleged former Nazi commander living in our midst. The Argentines were more welcoming, at least under Juan Perón, who encouraged Nazis to seek refuge in his country after World War II. As many as 5,000 did, including Adolf Eichmann, architect of the Holocaust, and Dr. Josef Mengele, Auschwitz’s Angel of Death. Based on a novel by Lucía Puenzo, who also wrote and directed the film, “The German Doctor” lets us know early on that the doctor in question is Mengele. It’s horror enough that he’s portrayed as a handsome, courteous charmer by Spanish actor Alex Brendemühl, but the real chill kicks in when the doctor ingratiates himself with an unsuspecting Argentinean family. The father is wary, but the daughter is smitten with the elegant stranger, and the mother — pregnant with twins, a Mengele specialty — puts herself in his care. The tension builds against a backdrop of glorious Patagonian scenery (Bariloche, at the foot of the Andes); what’s most menacing is the matter-of-factness with which the story unfolds. “The German Doctor” won 10 Argentinean Academy Awards and was Argentina’s official submission for Best Foreign Language Film consideration at the Oscars. FMI. Here’s the trailer. 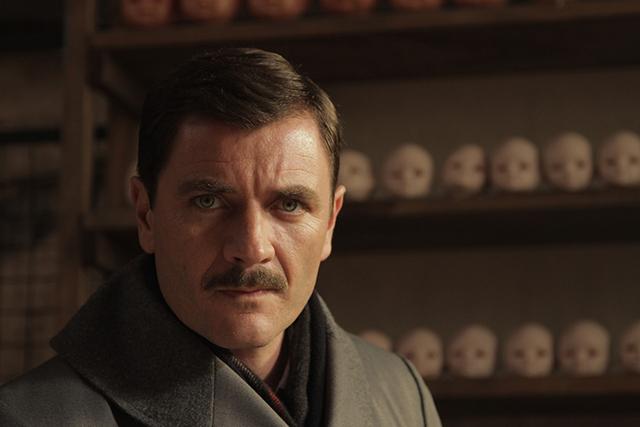 Opens tonight at the Film Society’s St. Anthony Main Theatre: “Only Lovers Left Alive.” A modern-day vampire love story, set in Detroit and Tangier, written and directed by Jim Jarmusch, starring Tilda Swinton. What else needs to be said? Here’s the trailer. FMI and tickets.

Saturday at the Minneapolis Pioneers and Soldiers Memorial Cemetery: Cinema in the Cemetery. A screening of Buster Keaton’s film “The General” accompanied by a live score by local music group Dreamland Faces. Proceeds support the Friends of the Cemetery’s efforts to restore the steel picket and limestone pier fence that borders the cemetery along Lake Street and Cedar. Gates open at 7 p.m., show at approximately 8:30. Arrive early to explore the historic cemetery and take part in a smartphone history hunt. 2925 Cedar Ave., Minneapolis. Bring blankets and lawn chairs, no coolers or pets; the Taco Taxi food truck will be there. Tickets $8 in advance, $10 at the gate (cash only) for ages 12 and up; admission is free for kids under 12.

Sunday at Orchestra Hall: Gala Benefit Concert Featuring the Preucil Family Players. The Suzuki Association of the Americas is holding its 16th annual conference in Minneapolis this week. William Preucil Jr., concertmaster of the Cleveland Orchestra, and Walter Preucil, acting principal cellist of the Chicago Lyric Opera Orchestra, and ensembles of varying sizes will play works by Dvorak, Paganini, Strauss and others. Proceeds benefit the SAA’s scholarship fund. Doors at 6:45, concert at 7:45. Tickets at the door ($25 adult, $10 child, families $60). The Minnesota Orchestra does not perform on this program.

Wednesday (May 28) through June 1 in Duluth: The Duluth Superior Film Festival. Every screening is free, but a private reception with Patty Duke on Friday, May 30, is not. (That will cost you $50, but it’s Patty Duke!) The festival opens with “Expedition to the End of the World,” a journey by three-masted schooner to the rapidly melting massifs of northeast Greenland, and ends with “You’ll Like My Mother,” a 1972 thriller starring Patty Duke, to be screened outdoors on the lawn of the Glensheen Mansion. In between, films about craft beer, compassion, cats, cults, coming of age, a pilgrimage in Nepal, polar exploration and more, plus the world premiere of a new video by favorite Duluth sons Trampled by Turtles. All free. Donations gratefully accepted. FMI.

Thursday (May 29) at the Dakota: Bill Charlap Trio. One of our most accomplished and elegant jazz pianists, Charlap has performed and recorded with Tony Bennett, Barbra Streisand and Wynton Marsalis, to drop a few names. He’s bringing his exceptional trio — Peter Washington on bass, Kenny Washington on drums — to the Dakota for one night and two performances. 7 p.m. and 9 p.m. FMI and tickets ($20-$30).

Legislators did well by the arts; Turnaround Arts coming to four Minnesota schools