A billboard of a clothesline stretched above the frozen Mississippi. What’s it all about?  In the words of photographer Alec Soth, who agreed to have his image reproduced on a billboard – a first for the artist – it represents “the way in which the creative spirit can flourish anywhere. I like to think of this clothesline as a symbolic starting line for a new wave of creativity in St. Paul.” Perched on top of the Pirtek building across from the Dubliner Pub in the University and Raymond Ave. area on the Green Line, the billboard calls attention to St. Paul’s Creative Enterprise Zone, an area where many artists and other creatives work. Businesses and nonprofits based there include Minnesota Citizens for the Arts, Minnesota Women’s Press, Tu Dance, Forecast Public Art, the Line, First & First, and Independent Filmmaker Project MN, plus singers, potters, writers and chocolatiers. The billboard will stay up until June 30. BTW, it shows only part of Soth’s original photograph, titled “Peter’s Houseboat, Winona, Minnesota 2002.” Here’s the whole thing.

After reading on Facebook that principal viola Tom Turner will be returning to the Minnesota Orchestra after a leave of absence, we asked the orchestra who else would be coming back. “We had eight musicians request leaves during the lockout,” spokesperson Gwen Pappas replied. “Most are planning to return.” Specifically, in addition to Turner, we’ll see violist Ken Freed, clarinetist David Pharris, trumpeter Robert Dorer, principal horn Michael Gast, and bass clarinetist Tim Zavadil. Violinist Peter McGuire is still on leave and hasn’t yet notified the orchestra of his intent. Burt Hara resigned to join the Los Angeles Philharmonic.

We love it, yeah, yeah, yeah. “Ladies and Gentlemen … The Beatles!” opened this week at the Mall of America, and if you have any interest in the greatest band of all time (well, they were), go. Presented by the Grammy Museum and a group of fans and collectors calling themselves Fab Four Exhibits, housed in the brand-new Midwest Music Museum next door to the radically relocated, not-yet-open 400 Bar, it begins with a real surprise that turns out to be very touching: about 30 black-and-white photographs by the boys’ American tour manager, Bob Bonis. Taken from his unique on-stage position at their one and only Minnesota concert on Aug. 21, 1965, at Met Stadium, these photos show the Beatles as you’ve never seen them before, even if you’ve seen a zillion photos. Pick one, squint a little, ignore the people around you, imagine loud screaming and you’ll travel back in time almost 50 years to a place very close to where you’re standing; the MOA stands on the site of the old Met. The rest of the exhibit includes hundreds of artifacts: the Nehru jacket Paul wore at Shea Stadium, Ringo’s original drum head from the Ed Sullivan Show, John’s tiny granny glasses, handwritten set lists, Beatles bubble-bath bottles, record cases, posters, magazines, games, album covers, and – especially fascinating – original contracts and documents. We learned that the top ticket price at the Beatles’ Hollywood Bowl concert on August 22, 1964, was $7. Which, as it happens, is the top (adult) ticket price to see the exhibit, which closes Sept. 7. FMI and tickets. 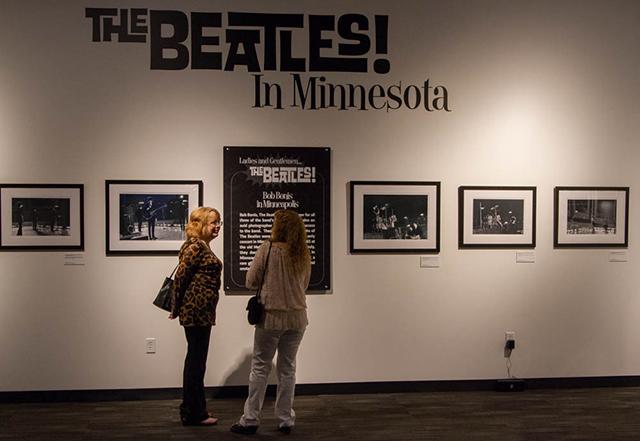 Photo by John Whiting
“Ladies and Gentlemen … The Beatles!” opened this week at the Mall of America.

It costs nothing to visit the astonishing urban walking gallery taking shape in downtown Minneapolis. “Made Here,” a joint effort among several partners including Hennepin Theatre Trust, Walker Art Center, Artspace and the City of Minneapolis, plans to fill 40 storefront windows with work by more than 50 artists and collaborations by the end of June. It will be the largest storefront window initiative in the country. Windows are being created by visual artists and organizations including Art Institutes International, the U of M’s College of Design, Dunwoody, UMD’s School of Fine Arts, architectural firms and other Minnesota-based companies. Art will be displayed along Hennepin and Lasalle, in City Center, on North 1st Ave. and North 4th St. On Friday, July 11 at 7 p.m., a “Made Here” launch celebration will be held in downtown Minneapolis. We’ll let you know more about that when we can. Meanwhile, here’s to the visionaries who came up with the idea of turning empty storefronts and spaces into galleries, and to the sponsors and funders who gave the cash to make it happen. FMI.

Cruciverbalists, this is for you: On Sunday, June 22, from noon until 5 p.m., the Friends of the Saint Paul Public Library will host the third annual Minnesota Crossword Tournament. Compete as an amateur, expert or team (up to four players) to solve original crosswords created and edited for the tournament by local pros whose work has been published in the New York Times. The winner of the expert category will receive admission to the 2015 American Crossword Puzzle Tournament (ACPT) in Stamford, Connecticut (March 25-27) directed by Will Shortz, who needs no introduction to crossword fans. You can also register as a spectator, which sounds about as interesting as watching paint dry, except “Wordplay” was a really fun movie and maybe it will be something like that. At Landmark Center in St. Paul. FMI and tickets. 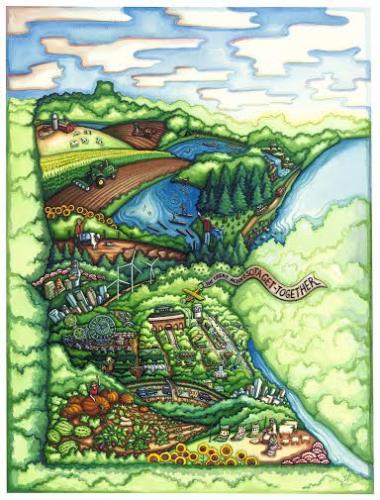 Fields and forests, cities and lakes, campers and beekeepers crowd together in St. Paul artist Emily Taylor’s original watercolor, chosen as this year’s official Minnesota State Fair commemorative art. Taylor lives just blocks from the fairgrounds, and her lifelong affection for the Great Minnesota Get-Together shows in her painting. Posters and signed prints are on sale now; proceeds support the Minnesota State Fair Foundation’s mission to preserve and improve State Fair buildings, grounds and educational experiences. Taylor’s art is the 11th in a series of annual artwork created exclusively for the Fair. Past artists include Mary GrandPré, Nancy Carlson, Leo Stans and Marie Olofsdotter. Here’s a gallery of past artwork.

For artists: FLOW Northside Arts Crawl is seeking proposals from members of the Northside Community for public art installations in North Minneapolis during the summer months of 2014 – some for the Arts Crawl (July 25-26), some for the Penn Ave. Community Works project. Tip: Projects budgeted under $1,000 are more likely to be chosen. Deadline: June 16. FMI. The 2014 Minnesota Film, Video, and Digital Production Grant Program (formerly the Minnesota Film and Video Program), funded by the Jerome Foundation, is accepting applications now. The program will award grants to emerging film, video and digital makers in the disciplines of experimental narrative, documentary, and animation. Budgets of any size are allowed; all budgets will be given the same consideration. Deadline: Sept. 26. Go here FMI including times and locations of information meetings.

All summer long, through Labor Day (Sept. 1), active duty military personnel and their families get in free to the Walker Art Center. The Walker is taking part in the Blue Star Museums program, a collaboration among the National Endowment for the Arts, Blue Star Families, the Department of Defense, and more than 2,000 museums across America. Other participating museums in Minnesota include the Glensheen Estate in Duluth; the Bell, Weisman, Hennepin History Museum, Minneapolis Institute of Arts, and American Swedish Institute in Minneapolis; Rochester Art Center; the Minnesota Children’s Museum in St. Paul; and the Stearns History Museum in St. Cloud. Here’s a complete list.

On sale Sunday, June 8: single tickets to “The Book of Mormon,” returning to the Orpheum Aug. 20-Sept. 7. The outrageous, irreverent nine-time Tony winner broke records during its first two-week run here in 2013. Drive downtown after church and get in line; Sunday’s ticket sales are in-person only at the State Theatre Box Office, 805 Hennepin Ave., from noon until 5 p.m. Online sales start Monday at 10 a.m. FMI.

Friday and Saturday at Icehouse in Minneapolis: Dave King Trucking Company. The band is on tour, meaning New York-based saxophonist Chris Speed is with them. (He can’t always make it when the rest of the band plays; drummer King, guitarist Erik Fratzke, bassist Adam Linz and saxophonist Brandon Wozniak all live here.) This is smart, energetic, joyous music that will almost certainly be punctuated by King’s tall tales. 11 p.m. both nights, doors at 10:30. FMI and tickets ($10 advance, $12 at the door).

Friday through Sunday at 50th and France: the 48th Annual Edina Art Fair. It’s the first big art fair of the year and the second largest in Minnesota (after Uptown), featuring 300 juried artists from Minnesota, the U.S. and Canada, food, entertainment, a Kids’ Zone, and more. Friday and Saturday 10 a.m. – 7 p.m; Sunday 10 a.m. – 5 p.m. Tip: Ride a bike (there’s a free bike corral in the US Bank parking lot off of West 50th) or park at Southdale and take the free shuttle. This is always a busy intersection, but the closing of Xerxes and now part of Penn have made it even worse. FMI. Free.

Saturday and Sunday at the Jin Hu Restaurant in New York Mills: David Henry Hwang’s  Obie Award-winning play “FOB” (Fresh Off the Boat ). Mu Performing Arts is taking this show on the road – to four Chinese restaurants across Minnesota. Director Randy Reyes explains, “The idea … came to me after visiting various small towns in greater Minnesota. Though there was very little diversity in restaurant choices, there was always a Chinese restaurant with Chinese owners. Then I started to wonder how these Chinese restaurant owners and their families ended up in these Minnesota towns and how many people in these towns know their stories.” From New York Mills, the play travels to the New Great Wall in North Mankato (June 14-15), Golden China in Red Wing (June 21-22) and Kingdom Buffet in Rochester (June 28-29). All performances are at 2 p.m. FMI and tickets ($5), which include a Chinese buffet meal. 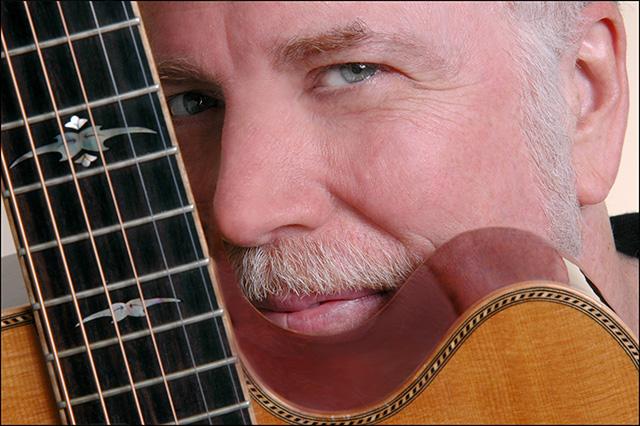 Saturday at Central Square in Glenwood and Sunday at Crossings at Carnegie in Zumbrota: John McCutcheon in Concert. Born in Wausau, Wisconsin, a graduate of St. John’s University in Collegeville, folksinger-songwriter McCutcheon plays a dozen different traditional instruments including the hammered dulcimer. He’s made 36 recordings and earned six Grammy nominations. Pete Seeger and Johnny Cash held him in high esteem. McCutcheon’s latest album, “22 Days,” is an homage to his friend Vedran Smailovic, who publicly played a classical music piece every day for 22 straight days in Sarajevo during the war in the Balkans. 7:30 in Glenwood; FMI and tickets ($15). 7 p.m. in Zumbrota; FMI and tickets ($25-$28).

Sunday along Lyndale Ave. in Minneapolis from 22nd St. to 42nd St.: Lyn-Lake Street Festival. Part of Open Streets Minneapolis 2014. Open streets means closed to traffic, open to walkers, bikers and bladers. It’s the only time all year you’ll be able to saunter 20 blocks down the center of Lyndale as if you owned it. Food, music, activities, contests, performances, demonstrations, and more. 10 a.m. – 4 p.m. FMI (click the icons on the interactive map).

Monday and Tuesday at the Trylon: “Burt’s Buzz.” Many of us swear by Burt’s Bees cremes and butters, soaps and balms. Few of us know that the former honey-selling hippie was forced out by his former partner decades ago. Jody Shapiro’s documentary has been making the rounds of film festivals and lands at the cozy Trylon on Monday for two nights. Screenings at 7 and 8:45 p.m. FMI and tickets ($8).