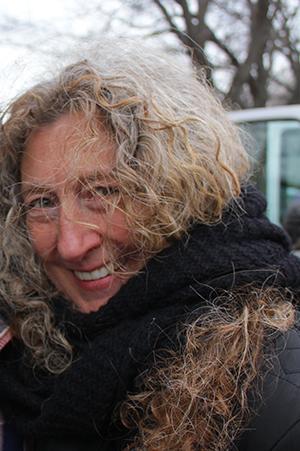 Courtesy of Heart of the Beast Theater
Sandy Spieler

Sandy Spieler, director of In the Heart of the Beast Puppet and Mask Theater since 1976, has been named the 2014 McKnight Distinguished Artist, a prestigious honor that includes a $50,000 cash award. The annual award recognizes individual Minnesota artists who have made significant contributions to the quality of our state’s cultural life. Past recipients include Wendy Lehr, Warren MacKenzie, Robert Bly, Dale Warland, Lou Bellamy, Ranee Ramaswamy and Stanislaw Skrowaczewski. Check back Monday for a Q&A with Spieler about HOBT, the annual May Day Celebration and any stories we can uncover about turning an X-rated theater into a community hub.

The Minnesota Orchestra continues to get its ducks in a row. Sarah Hicks has signed back on to lead the “Live at Orchestra Hall” concert series through 2016-17. This is the MOA’s nonclassical series, a wide net that includes popular music, jazz, Broadway classics, movie scores and world music; it will be announced in July. “I have been fortunate to hold my dream job with the Minnesota Orchestra,” Hicks said in a statement, “and I have many ideas for where we’ll go next.” Hicks has been with the Orchestra since 2006, when she joined as assistant conductor; in 2009, she was named principal conductor of pops and presentations, succeeding Doc Severinsen. Music Director Osmo Vänskä praised Hicks for her “very creative programming as the head of this series. I have always said that we must take care of all the genres of music we offer, and I believe Sarah will continue to lead this series and these audiences in positive new directions.” Hicks will also conduct the chatty, informal and informative “Inside the Classics” concert series, which we’re glad to hear will return in spring 2015. As before, Minnesota Orchestra violist Sam Bergman will co-host. 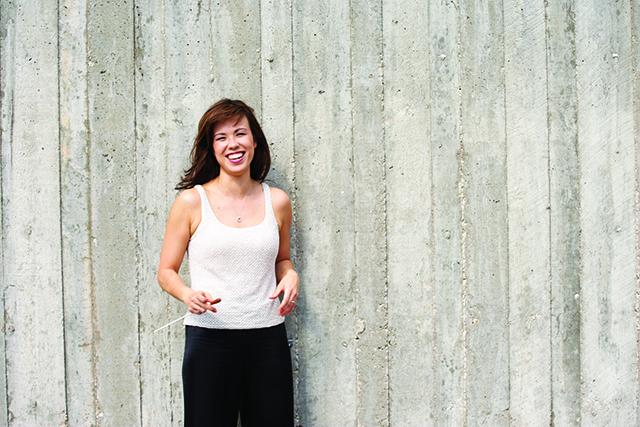 Courtesy of the Minnesota Orchestra
Sarah Hicks has signed back on to lead the “Live at Orchestra Hall” concert series through 2016-17.

Minnesota Opera has commissioned another new opera, “Dinner at Eight,” as part of its New Works Initiative (NWI). Based on the play by George S. Kaufman and Edna Ferber, it will premiere at the Ordway in 2016-17. Grammy and Pulitzer winner William Bolcom will write the music, Mark Campbell the libretto for this Depression-era comedy of manners that promises “marital infidelity, financial ruin, social opportunism, a fatal disease and a suicide,” Campbell said rather gleefully in a statement. Campbell is the Opera’s go-to guy for commissions; “Dinner at Eight” follows “Silent Night,” which had its world premiere at the Ordway in 2011 and for which composer Kevin Puts won the Pulitzer, and also “The Manchurian Candidate” and “The Shining,” both forthcoming. Meanwhile, the opera reports that its NWI fundraising campaign has been completed a year ahead of schedule.

How much does it cost to put your name (or someone else’s) on a theater seat? That depends on where it is. At the Orpheum, which will soon replace the 100-year-old seats on its main floor with new ones, you’ll pay $2,500, $1,000 or $500 for the name in two places: on a seat plate on the arm and a plaque in the lobby. A Christmas gift for Mom? Start here, and if you have a particular seat in mind, you might want to boogie.

The Schubert Club and Kate Nordstrum Projects have announced the next season of Accordo, the superb chamber ensemble made up of SPCO and Minnesota Orchestra principal string players. This is Accordo’s sixth year, and its fourth at Christ Church Lutheran, a National Historic Landmark in the Longfellow neighborhood. The new season includes works by Haydn, Dvorak, Beethoven, Elgar, Brahms, Mozart, Honegger and Lerdahl. Last year in October, Accordo tried something new – an evening at the Amsterdam Bar & Hall in downtown St. Paul, billed as a special event, featuring parts of the more formal concert it had performed the night before. This year they’re going to the Amsterdam three times. So it’s no longer a special event; it’s part of the season.

Barry Kempton, the Schubert Club’s artistic and executive director, took us inside the decision. “We tried something new, learned a bunch of things, and got an enthusiastic audience, so we thought – let’s do it some more,” he told MinnPost on Wednesday. Kempton is all for presenting classical music in unconventional venues; his Schubert Club Mix series launches its second season at Aria in Minneapolis in October. “The [Amsterdam] concept, a little like going into Aria, is about presenting great music and some of the community’s strongest musicians in a different environment. People get to see the musicians and hear the music in a different ambience. Maybe it will attract a different segment of music lovers, maybe it won’t, but whoever’s there will have a different kind of experience.” At the same time, “the musicians are challenging themselves to find different ways to present their art form.” In fact, the idea for the Amsterdam mini-series came from the musicians. “They are their own artistic leadership team,” Kempton said. “They decide their programs and what they want to do.” Subscriptions to Accordo are on sale now; for the first time, seating at Christ Church Lutheran is assigned. Subscribers may also buy tickets to the Amsterdam performances. Single tickets for all concerts go on sale to the general public Aug. 4.

The Film Society is screening or will soon screen three films on artists and their lives. “Finding Vivian Maier,” about the picture-taking nanny now considered among the 20th century’s greatest photographers, has been extended through Thursday, June 26. (Don’t forget that the Minneapolis Photo Center now has a permanent exhibition of photographs by Maier.) “20,000 Days on Earth,” a fictional day in the life of musician and cultural icon Nick Cave (featuring the real Nick Cave), shows for one night only: Sunday, June 22. “Ai Weiwei: The Fake Case,” about the Chinese dissident ArtReview named the most powerful artist in the world, moves into the St. Anthony Main Theater from June 27-July 1. Click the links for trailers and everything you need to know. 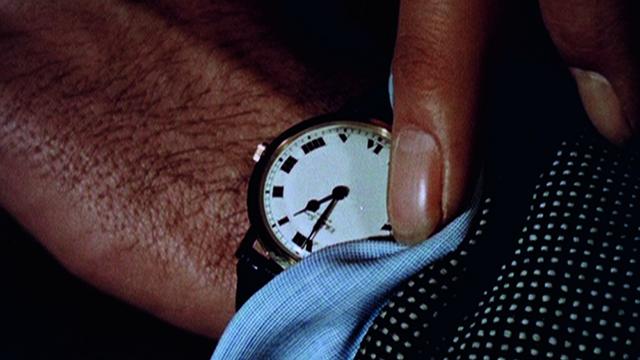 We’re already planning our summer so we’re sure to catch every minute of “The Clock,” the addictive 24-hour film by Christian Marclay now at the Walker. Working with a team of researchers, Marclay compiled some 12,000 clips from the history of film – old and new, color and black-and-white, English and other languages – that show time passing: on wristwatches, clock towers, alarm clocks, mantel clocks, grandfather clocks, animated clocks, clocks in train stations. He edited them into a narrative that shouldn’t work but does. A character in one clip looks to the left; a character in the next clip looks to the right, and in your mind, their eyes meet. The sound is seamless, so there’s no choppiness or jagged segues. The film unfolds in real time; when a watch or clock on screen says noon, that’s what time it is where you are. Walk outside and you almost expect to see a giant clock in the sky, because the whole world seems purposeful and synchronized. You may never look at film the same way again, or at time.

We’ve seen daytime bits of “The Clock,” and middle-of-the-night bits (at Northern Spark), and it doesn’t matter which bits you see first or last. Walk into the Burnet Gallery, find a seat on one of the sofas, and the film will pull you in. If you’re nearby and the museum is open, stop in for 15 minutes or an hour or two. (If you’re a member, you can breeze in as often as you like without paying admission.) The film runs continuously during regular hours. Entry is first-come, first-served; you might end up standing instead of sitting. Three more all-night screenings are planned: July 10-11 (11 a.m. Thursday – 5 p.m. Friday), Aug. 8-9 (same hours, Friday-Saturday), and Aug. 23-24 (Saturday-Sunday). On Sunday, June 29 and Saturday, Aug. 23, members can come at 9 a.m., before the Walker opens to the public. At the all-night screenings only, a punch clock will help you keep track of the parts you see. We wish they’d make it available during regular hours, too.

Tonight and Saturday at the Ted Mann Concert Hall: “The Big Gay Sing.” The Twin Cities Gay Men’s Chorus welcomes special guest Miss Richfield 1981 to their annual Pride concert, performed (for the first time) a weekend early. Music includes “Everybody Rejoice” from “The Wiz,” “Don’t Stop Believin’,” Queen’s “We Will Rock You” and “It’s Raining Men.” In other words, a party. 8 p.m. both nights. FMI and tickets ($25-$53).

Saturday at the Uppercut Boxing Gym: Posters and Pints. An art show, beer tasting and fundraiser spotlights the Northeast Minneapolis Arts and Brewery district and benefits Art Buddies. Limited-edition beer-themed posters are $30 each. Craft brewers in the house will include 612Brew, Dangerous Man and Steel Toe. Ticketed 21+ event; FMI and tickets ($20).

Saturday at the Third Place Gallery: “Chinese-ness.” Photographer Wing Young Huie recently returned from his first trip to Guangzhou, China, his first trip to his family’s ancestral village and his first time photographing in China. “Chinese-ness” uses documentary and conceptual strategies to explore ideas of Chinese identity in Minnesota, China and throughout the U.S. 7-9 p.m. Artist talk at 8 p.m.

Saturday at Studio Z: “Improvisation Encounter with Jin Hi Kim.” With McKnight Visiting Composer Jin Hi Kim on komungo (Korean zither) and forward-thinking Twin Cities musicians Pat O’Keefe and Nathan Hanson on winds, Scott Miller and Steve Goldstein on electronics, and Dean Granros on guitar, this evening of free improvisation could be anything at all. And the new Green Line runs right past the door of Studio Z’s building in St. Paul’s Lowertown. 7:30 p.m. FMI and tickets ($10).

Saturday and Sunday at the Goldstein Museum of Design’s Gallery 241: “Signed by Vera: Scarves by an Iconic Designer.” Vera Neumann’s bold, bright scarves on surplus parachute silk (affordable and available during WWII, when linen wasn’t), each bearing her signature, were snapped up by fashionable women and collectors. The Goldstein’s show spans her 40-year career with choice examples from its collection of around 550 Vera Neumann scarves, most donated by David Anger and James Broberg of Edina in 2010. All started as paintings before being adapted for screen printing, and they line the walls like paintings. In McNeal Hall on the U’s St. Paul campus. Free. Weekend hours are 1:30 – 4:30 p.m. Also Tuesday through Friday, 10 a.m. – 5 p.m. Ends June 29.