The Playwrights’ Center has announced its 2014-15 McKnight Theater Artists, defined as “artists other than playwrights whose work demonstrated exceptional artistic merit.” Austene Van is an actor, director and choreographer whose numerous credits include “Spunk” at the Penumbra and “Amen Corner,” a Penumbra production at the Guthrie; the title role in “Aida” at the Pantages with Theater Latté Da; “A Street Car Named Desire” with Ten Thousand Things; “To Kill a Mockingbird” at Park Square; and “Six Degrees of Separation” (as director) at Theatre in the Round. A Twin Cities actor for over 30 years, Sally Wingert has appeared in more than 80 productions at the Guthrie including “Other Desert Cities,” “Tribes,” and “Pride and Prejudice.” Most recently, she was Fraulein Schneider in Theater Latté Da’s “Cabaret” and played the title role in Dark & Stormy’s “The Receptionist.” Mathew LeFebvre is a costume designer whose work has been seen locally in more than 20 productions at the Guthrie and 15 at Penumbra, as well as Mixed Blood and Jeune Lune. Fellows receive $25,000 plus $7,000 more to create new theatrical work. 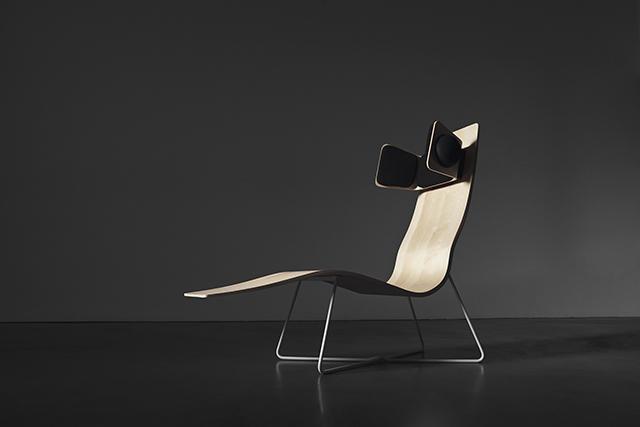 In case you haven’t noticed, everything in the Twin Cities is coming up Finnish. At the Minneapolis Institute, “Finland: Designed Environments” examines contemporary Finnish design and how it shapes and colors nearly every aspect of Finnish existence, from city streets to cultural life, fashion to food. Through Aug. 17. (The catalog for this show is a thoroughly modern e-book.) The Textile Center is hosting “Dreams & Memories: Contemporary Tapestries by Aino Kajaniemi,” Finland’s 2010 Textile Artist of the Year, making her U.S. debut. Unlike the heavy, formal works the word “tapestry” usually evokes, Kajaniemi’s textiles are more like sketches or drawings. Through Aug. 16. Also at the Textile Center: “Warming the Room: Finnish-American Rug Weaving,” featuring work by Finnish-American artists Wynne Mattila and Nedra Granquist. Through July 12. 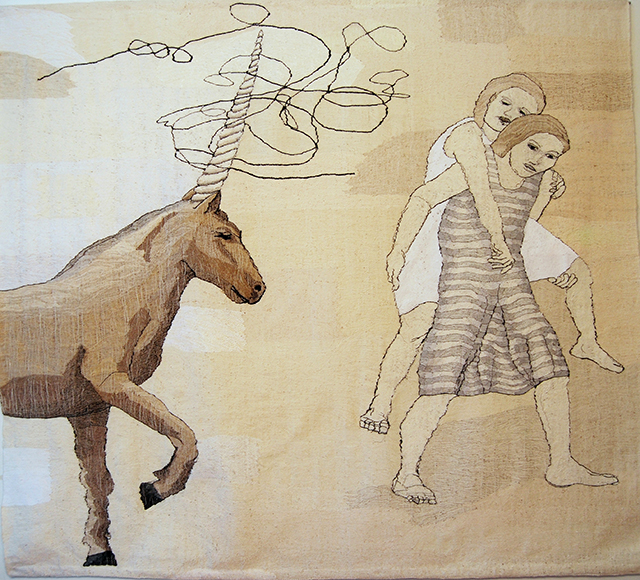 At the American Swedish Institute, “The Living Tradition of Ryijy – Finnish Rugs and Their Makers” spans the 300-year history and evolution of the intricate, hand-knotted piled rugs that began as bed covers and foot warmers and became art. Through Nov. 2. From Aug. 6-17, Finnish textile artist and ryijy maker Siiri Korhonen will serve as ASI Artist-in-Residence, offering on-site demonstrations. Meanwhile, ASI will offer its first “Introduction to Finnish” course in 10 years. The registration deadline is July 2. Why so much Finnish art, why now? Because FinnFest USA, the annual national festival of all things Finnish-American, comes to Minneapolis in August, celebrating the little-known fact that Minnesota is home to the largest percentage of Finnish-related persons in the U.S. Hold on to those blue-and-white flags you waved at the “Finnish It” concerts at Orchestra Hall.

The Rose Ensemble has revealed its 2014-15 season of four concert programs with stories to tell. In October, the group travels throughout Minnesota with “The Roots of Bluegrass,” an evening filled with hymns, Appalachian songs, shape-note singing and Shaker spirituals. Dec. 18-20: “Bow Down, Good Cherry Tree: A Garden of Medieval Music for the Nativity.” Feb. 26-28, 2015: “The Requiem Mass of Pedro de Escobar,” a historical musical recreation of a Renaissance mass. April 29-May 3: “The Hutchinson Family Singers: Antislavery Reform in 19th-century America.” A fully staged and costumed production commemorating the 150th anniversary of the Civil War’s end. FMI and tickets. P.S. We learned last week that the Rose Ensemble will perform its first-ever concert with the Minnesota Orchestra on Sunday, Dec. 14. “Navidad en Cuba: Christmas in Havana Cathedral” will include a Christmas Mass from 18th-century Cuba and works from the Mexican Baroque. The what? Apparently some very fine Baroque music was written in the New World between 1600 and 1800. Go here to learn more about that from Minnesota Orchestra watcher and blogger Scott Chamberlain, who’s “absolutely giddy” about the upcoming orchestra season. 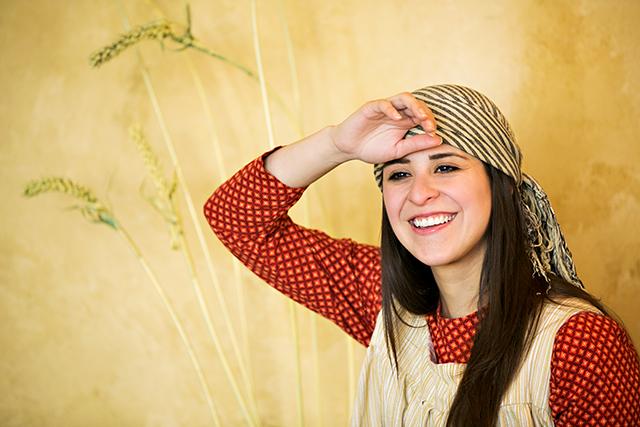 Memory, nostalgia and place – the wide-open Nebraska prairie and its “complete dome of heaven” – crowd the small stage in Illusion Theater’s production of “My Ántonia.” Adapted from Willa Cather’s novel by Allison Moore, now at the compact black-box Lab Theater at the St. Paul Conservatory for Performing Artists, it unspools enough of the novel’s story that we don’t feel cheated by its length, a mere 90 minutes (with no intermission). The year is around 1915, and Jim Burden, the main character, is a grown man looking back on his childhood, especially his friendship with Ántonia Shimerda, the daughter of a Bohemian immigrant family who came to the Midwest hoping for a better life. Although Jim has found success – he went to university, finished at Harvard and became a prosperous New York City lawyer – he still yearns for the land and people he left behind. This is not a story in which much happens; the two big things are a tragic event offstage and a turn in Ántonia’s life that could have ruined it but didn’t, and both are smoothed by time. Yet it makes us long for a childhood most of us never had, of running through fields and watching storms roll in.

The role of Jim Burden is played by two actors, Dan Hopman as wistful, elegiac adult Jim and Zach Keenan as eager, gangly young Jim, but only one plays Ántonia throughout, first as a 14-year-old girl and later as a matriarch. Andrea San Miguel, seen most recently in Theater Latté Da’s “Our Town,” is a candle flame on stage, compelling attention whenever she appears. She brings so much energy, exuberance, and sheer strength to her character that it’s no wonder Jim is smitten from the start. We are, too, and we care what happens to her, and we’re relieved when things turn out well. Fresh from a performance at the Willa Cather Spring Conference in Nebraska, “My Ántonia” runs through June 28. FMI and tickets ($15-$30).

It’s amazing how many people came out for Northern Spark on Saturday night, despite the storms, which apparently included a tornado-making phenom called “gravity waves.” We stood outside the Convention Center having serious doubts about the clouds, then went in for the opening party, which drew fewer people than it should have for thundering music by taiko drummers Mu Daiko and the all-female hip-hop group GRRRL PRTY, interspersed with brief speeches by Minneapolis Mayor Betsy Hodges and Northern Spark founder Steve Dietz. Yet the mood was festive and the crowds grew at Orchestra Hall, where the Minnesota Orchestra performed Kevin Puts’ “Symphony No. 4: From Mission San Juan” to live visual projections and people saved seats with bicycle helmets. Later, at the Walker, a long line formed to get into Christopher Marclay’s film “The Clock,” which Alec Soth showed up to see; the “Hopper Drawing” exhibition drew a throng worthy of an opening night; and artists sketched from a Hopperesque tableau with live models. People wheeled skinny bikes through the halls, a man wore moth wings, and a tall young woman in bright yellow rain overalls strode by. We had to cut our evening short – we had a dog at home in a Thundershirt – but we’re committing to the full night next year. When you’re in the midst of it, with things happening and people all around, the energy is infectious and staying out until dawn seems easy, like something we should do more often. 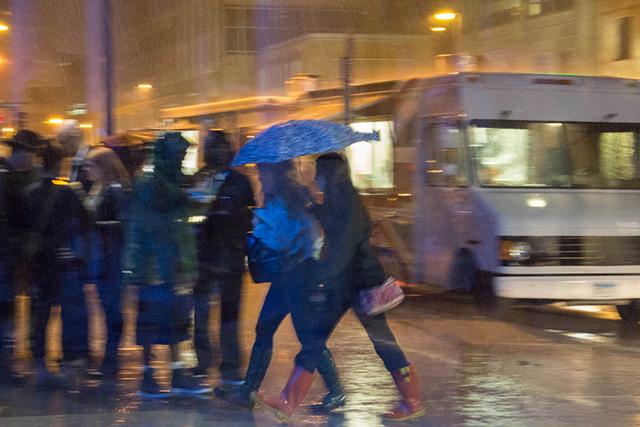 Photo by John Whiting
It’s amazing how many people came out for Northern Spark on Saturday night despite the storms.

If you attended a production at the Chanhassen anytime from 1993 to 2010, and especially if it was your birthday or anniversary, you’ll remember Dick Stanley, the genial and debonair emcee who opened each show from the stage. Stanley, 78, died Thursday night from natural causes. Graydon Royce wrote the obituary for the Star Tribune. A memorial service for Stanley, open to the public, will be held at the Fort Snelling chapel at noon on June 23.

Tonight (June 17) at the Loft: Emily Johnson’s “SHORE: Story.” This is world premiere week for award-winning choreographer Johnson’s latest work, third in a trilogy after “The Thank-you Bar” and “Nicugni.” A multi-day performance installation of dance, story, volunteerism, and feasting, SHORE expands beyond the theater into the world. Tonight’s curated reading features local authors Jayal Chung, Paula Cisewski, Heid Erdrich, Brett Elizabeth Jenkins, R. Vincent Moniz Jr., Marcie Rendon, and Ben Weaver. 7 p.m. Free, but registration is required (or requested, depending on whose website you read). Call 612-624-2345. SHORE continues with dance performances Friday and Saturday at Northrop, a clean-up community action on Saturday, and a feast on Sunday. FMI and tickets/registrations.

Wednesday at the Grand Café: Heid Erdrich: Fork and Forum. After Tuesday’s reading at the Loft, the author of “Original Local: Indigenous Foods, Stories, and Recipes from the Upper Midwest” will be the featured guest at the Grand Café’s dinner series. 6 p.m. Reserve on the website (through Open Table) or call 612-616-4168.

Wednesday at Icehouse: Tim Sparks’ “Chasin’ the Boogie” CD Release. Sparks is a genius and a poet on the acoustic guitar, an award-winning finger-picker who can turn six strings into an orchestra. (We’re not kidding around. Sparks can play the “Nutcracker” Suite on solo guitar, and Stravinsky’s “Dance Russe,” and Shostakovich’s Prelude No. 8, and who knows what else.) His 10th CD includes original compositions and Sparks’ own arrangements of classics like “Blackbird,” “Mr. Bojangles” and “Both Sides Now.” 7 p.m. FMI and tickets ($10 music only, $42 dinner and show).

Wednesday at the Dakota: Ginger Baker’s Jazz Confusion. Here’s a case where you don’t want to request the table right next to the drummer. It’s best to put some distance between yourself and Baker, who once broke a filmmaker’s nose with his cane. (The film is aptly titled “Beware of Mr. Baker.”) The former member of Cream and Blind Faith can be cranky and ill-tempered, but he can also play the drums like no one else on the planet. And he prefers being called a jazz drummer. Baker recently signed with the respected jazz label Motema; their first CD together, “Why?” was released in May. His touring quartet includes bassist Alec Dankworth, saxophonist Pee Wee Ellis and percussionist Abas Dodoo. 7 p.m. FMI and tickets ($42-$50).

Wednesday at the Trylon: The Defenders: Andy Sturdevant. The Defenders series features films whose titles are kept secret until the night-of, chosen by notable Twin Cities personalities. We can’t imagine what writer/artist/author (“Potluck Supper with Meeting to Follow”)/MinnPost columnist (“The Stroll”)/moderator (“Salon Saloon”) Sturdevant has chosen, but you won’t be bored. 7 p.m. FMI and tickets ($8).

Thursday at the Minneapolis Institute of Arts: Artist and writer Eric Hanson. His illustrations and writing have appeared in Vanity Fair, Harper’s, the New York Times, Rolling Stone, McSweeney’s and the Atlantic. As part of Coffee House’s inventive “In the Stacks” program, he’s spent part of his summer as artist-in-residence inside MIA’s Research and Reference Library. What treasures did he find, and what did they inspire him to do? Find out starting at 7 p.m. in the MIA’s Friends Community Room. Free and open to the public, this event is part of the museum’s Third Thursday series. FMI.

Thursday at the Chanhassen’s Fireside Stage: “Gary Rue’s Only Love Can Break a Heart: The Music of Gene Pitney.” Rue was Pitney’s music director from 1986-2006; he was also band leader for the Coasters, the Platters, the Marvelettes and the Shirelles. He’ll revisit Pitney’s hits including “The Man Who Shot Liberty Valance” and “Town Without Pity,” winner of the first Golden Globe for best original song. 8 p.m. Tickets here ($40) or call 952-934-1525.