As resistance to gay marriage crumbles state by state – on Wednesday, a federal judge struck down Indiana’s ban, and the whole issue appears headed for the U.S. Supreme Court – the 42nd Annual Pride Festival is under way in the Twin Cities. One highlight will surely be the first-ever at-the-festival legal weddings performed in Loring Park. Others include Sunday’s big, colorful, raucous parade (11 a.m., on Hennepin between 3rd St. and Spruce Place); an all-weekend festival in Loring Park with vendors, food, drink and now nuptials (Saturday 10 a.m. – 10 p.m., Sunday 10 a.m. – 6 p.m.); an Out in Gospel concert at St. Mark’s Episcopal with Pippi Ardennia, W.J. Moussa Foster and Jevetta Steele (7:30 p.m. Friday, free); Pride in Concert with pop singer Betty Who, gay country star Steve Grant, and Motown’s Thelma Houston (5 p.m. Sunday, tickets here); and the Queertopia Cabaret at Intermedia Arts (7:30 Friday and Saturday, tickets here). If you can, catch a wedding. It’s been less than a year since gay marriage was legalized in Minnesota.

Sommerfest artistic director Andrew Litton is the latest major player to re-up with the Minnesota Orchestra. Last week he signed a new contract through 2017. The genial Litton – conductor, pianist, Grammy-winning recording artist and bon vivant – has led Sommerfest since 2003. This year’s Sommerfest is July 5-26, and it’s the sparkling summer entertainment we’ve come to expect, including a “Salute to America” (music by Bernstein, Gershwin, Copland and more); “A Night in Vienna” (music by Strauss and Chopin); Litton’s own tribute to the great jazz pianist Oscar Peterson, in which he’ll perform selections from his new solo piano CD by that name; Courtney Lewis’ final appearance as Minnesota Orchestra’s associate conductor (Tchaikovsky, Mozart, Rachmaninoff); an evening of Broadway theater music; and a complete semi-staged performance of “Die Fledermaus.” Explore the whole Sommerfest here. 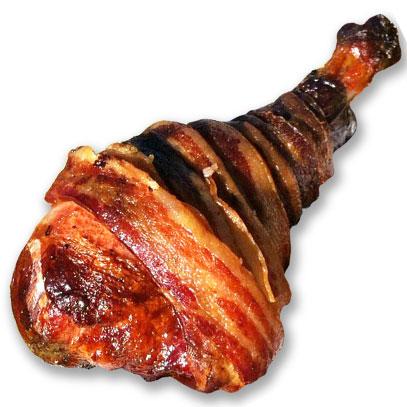 We love the build-up to each year’s Minnesota State Fair. The news of the grandstand acts, three by three or one by one as the calendar fills in. (Most recently: country superstar Toby Keith, Aug. 21, on sale now.) The unveiling of the Commemorative Art. The big list of free entertainment. And especially the announcement of the new fair foods. Because the State Fair is the one time a year when we let ourselves eat really crazy things, usually deep-fried, on-a-stick, or wrapped with bacon, preferably all three. This year does not disappoint. The 28 new foods for 2014 include (fanfare, please) Bacon-Wrapped Turkey Leg (a roasted turkey leg wrapped in a layer of bacon) at Texas Steak Out, Beer Gelato (blended with local craft bear) at Mancini’s Al Fresco, Chocolate Dessert Salami (chocolate, butter, almonds and walnuts rolled into a salami shape, dusted with powdered sugar, served on crackers) at Sausage Sisters, Deep-Fried Breakfast On-a-Stick (pure genius: cheeses, sausage, egg and Canadian bacon wrapped in pancakes, dipped in batter, and deep-fried) at the Sandwich Shop, North Shore Pasta (walleye mac & cheese with corn, red peppers, smoked Gouda sauce and Parmesan parsley bread crumbs) at Giggles’ Campfire Grill, and Pretzel Curds (cheddar cheese curds deep-fried in a batter of crushed pretzels) at O’Gara’s. One year, long ago, we went to the Fair as vegetarians on a diet. Dumb.

Enjoy Pamela Espeland’s arts coverage? Support it by donating to the 2014 Artscape Challenge.

If you’ve wondered what’s up with the old Artists’ Quarter space in St. Paul since owner Kenny Horst shut the doors Jan. 1, the Dakota has leased the space and will host a soft open this weekend during Jazz Fest. The club in the basement of the Hamm Building, downstairs from Great Waters and Meritage, will be open Friday and Saturday nights from 9 p.m. until after midnight. Suggested donation: $5 (proceeds go to Jazz Fest). The bar will be tended.

You know you want to weigh in on the biggest, fuzziest People’s Choice competition of the year. Go here to vote for the Golden Kitty Award for best cat video in the Walker’s Internet Cat Video Festival. Because this is our job, we watched all five finalists and have a few opinions to offer. “8 Signs of Addiction”: Best soundtrack. “An Engineer’s Guide to Cats 2.0”: Long-ish but hilarious. “Gotcha! (??????!)”: Cute, but not trophy-worthy. “Jedi Kittens Strike Back”: Best technical achievement for video shot in a college dorm. “Milo Wanted Attention”: Whatever. This year’s CatVidFest will be Thursday, Aug. 14 on Walker’s Open Field. 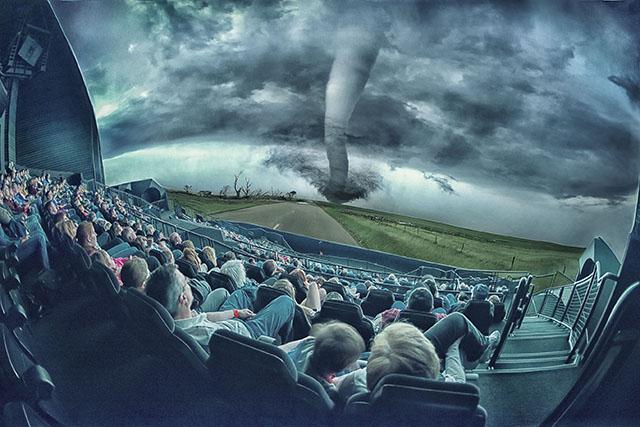 Starting in September, the Science Museum of Minnesota will convert its Omnitheater from film to IMAX’s next-generational digital laser projection system. Sometime in 2015, they’ll start beta-testing the new technology, presumably on live audiences. What to expect: better contrast, brightness, clarity and color, more colors and deeper blacks. When the conversion is complete, the Omnitheater will be the world’s first IMAX laser dome theater. The theater will close from Sept. 2 to Oct. 3, when an upper projection booth will be expanded. Carpeting will be replaced and seats renovated in 2015.

TPT last week announced plans for the renovation of its 25-year-old facility in St. Paul. With the successful completion of a four-year, $37-million funding campaign, our local public television entity will make an $18 million investment in its Lowertown HQ. Among other improvements, the main entrance will be moved to street level, opening up the lobby to serve as a community space for public events, concerts and performances. TPT isn’t just about TV anymore; it is actively and effectively using the web to reach out to older Americans (Next Avenue), serve families and children (Sparticl, PBS Kids on TPT), and attract 20- and 30-somethings (Rewire). Money from the campaign will also fund these initiatives. 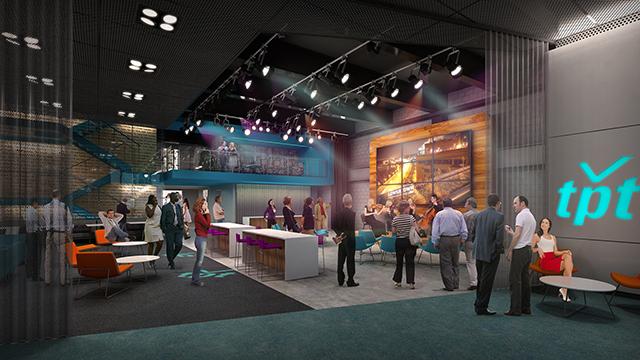 Courtesy of TPT
A rendering of the new addition to the TPT space on street level.

Joy of joys, the Film Society’s St. Anthony Main Theatre has new seats. Not quite the leather La-Z-Boys you’ll find at Marcus Theatres in Oakdale (and Rosemount, plus the AMC Coon Rapids, in case you want to go), but a huge improvement nonetheless. But while the Marcus and AMC have super-cushy seats, they don’t have “Return to Homs,” the Sundance Grand Jury Prize winner now playing at the St. Anthony Main, or “Venus in Fur” (opens Monday), the film version based on the Tony-winning play that was such a big hit at the Jungle last year.

Three substantial 2014 ArtPlace America grants have been awarded to Minnesota arts organizations. Springboard for the Arts receives $100,000 for Imagine Fergus Falls, a program of on-site artist residencies and an annual festival on the campus of the former Fergus Falls State Hospital, a 1,000-acre mental institution that has been vacant for nine years and will undergo development starting this fall. Juxtaposition Arts will use its $500,000 grant to give college students service-learning opportunities and prepare North Minneapolis youth to enter the work force. Pangea World Theater’s $120,500 will go toward partnering with the Lake Street Council, area artists, and Latino and Somali businesses to install multimedia interventions along Lake Street, bridging and bonding communities.

The St. Paul Art Collective (Saint Paul Art Crawls, Lowertown Fridays) and Osseo’s Yellow Tree Theatre are the winners of this year’s Arts Achievement Award from the Metropolitan Regional Arts Council. MRAC recognizes two organizations each year that exemplify its mission of increasing access to the arts. Both groups will be recognized at MRAC’s annual meeting on July 22 at the Minneapolis Photo Center; each will receive a $5,000 cash award.

With Harriet Island underwater, Taste of Minnesota is heading west – all the way to Waconia and the Carver County Fairgrounds. “We talked to so many different places and so many different people,” festival owner Linda Maddox told WCCO. Some food vendors will probably drop out, but the bands – Soul Asylum, Starship, Tina and the B-Sides, and Badfinger – will play on. July 3-6, 11 a.m. – 3 p.m. daily (free), 3 p.m. – 11 p.m. ($10 admission).

In case you haven’t seen it, here’s the posting for Joe Dowling’s job at the Guthrie. Know anyone? Dowling will step down June 30, 2015, after 20 years as artistic director.

Today (Friday, June 27) in the auditorium at McNally Smith: A clinic by Branford Marsalis, Grammy-winning saxophonist and tonight’s Jazz Fest headliner. The eldest Marsalis brother, Branford always has something interesting and provocative to say. 2 p.m. Free and open to the public.

Today and tomorrow at the Minnesota State Fairgrounds: the Twin Cities Antiquarian & Rare Book Fair. More than 50 booksellers have brought antiquarian, fine and rare books covering many subjects and genres. Ken Sanders, legendary Salt Lake City bookseller, enemy of book thieves and author of “The Man Who Loved Books Too Much” will speak tonight at 6 p.m. On Saturday at 10:30 a.m., Andy Sturdevant, author of “Potluck Supper with Meeting to Follow” and writer of MinnPost’s “The Stroll,” will read from rare children’s books from the Minnesota Historical Society’s collections, along with celebrity baker Danny Klecko. In the Progress Center. Friday 3-8 p.m., Saturday 10 a.m. – 4 p.m. $7 Friday (includes Saturday admission), $5 Saturday. Kids 12 and under get in free; high school and college students get in free on Saturday with school ID. FMI.

Tonight in St. Paul: River City Revue: Working River Walking Tour. Under normal circumstances, this walking tour – a blend of art, science, history and adventure – would be a pretty terrific event, with live music from Ben Weaver, video screenings by Works Progress Studio, stories, and guests including a park ranger and historian, authors and a choir. With the river officially at “major” flood stage and Shepard Road closed to car traffic – but not to foot traffic – Andy Sturdevant promises “a thrillingly deserted post-apocalyptic quality to everything.” Starts at the Mississippi River Visitor Center at the Science Museum. 7-9 p.m. FMI and tickets ($10/$8).

Tonight through Sunday: “Love’s Labours Lost.” This early comedy by William Shakespeare is set in a park, so why not see it in a park? Earlier this year, the Classical Actors Ensemble delighted audiences with the Bard’s “Romeo and Juliet” and Thomas Middleton’s “A Chaste Maid in Cheapside,” performed in repertory. We hear they’re every bit as delightful in “Love’s Labour’s Lost,” plus it’s free. (Donations are appreciated.) 7 p.m. Friday at Hillcrest Knoll Park in St. Paul, 7 p.m. Saturday at Lake of the Isles Park in Minneapolis, 2 p.m. Sunday at Highland Park in St. Paul. Through July 13. See the rest of the schedule here.

Tonight through Sunday at Orchestra Hall: “Carmina Burana,” Stravinsky’s Symphony of Psalms and Heitzeg’s “Now We Start the Great Round.” The Minnesota Orchestra ends its first subscription season post-lockout with Yan Pascal Tortelier at the podium and rafters-raising music on the program. Some of us will remember that “The Great Round” was commissioned for the Season Finale concerts that closed Orchestra Hall in July 2012 before the renovations began. St. Paul-based composer Heitzeg’s celebratory work has now been revised. With soloists Audrey Luna, Scott Ramsay and Stephen Powell and the Minnesota Chorale. Tonight at 8 p.m., Saturday at 8 p.m., Sunday at 2 p.m. FMI and tickets ($22-$84). 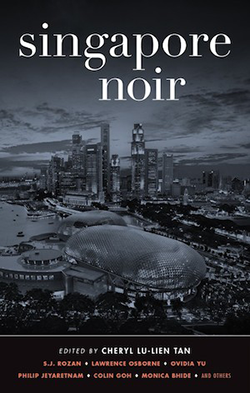 Saturday at Valley Bookseller in Stillwater: Pauline Knaeble Williams and Judith Yates Borger. Williams grew up in North Minneapolis and now lives in New Jersey; Borger is a former Pioneer Press reporter who lives in Minneapolis. Both have written books perfect for the porch or beach. Williams’ “Finding Hollis” is a mystery with relationships at its core. Set in Minneapolis, “Who Bombed the Train” is Borger’s third book about Twin Cities newspaper reporter Skeeter Hughes. 1 p.m. Note: the Stillwater Lift Bridge spanning the St. Croix is closed due to flooding.