Imagine you’re a 16-year-old who lives in Lino Lakes and dreams of a career in classical music. The Minnesota Orchestra musicians are your heroes. But they’re locked out by management and their music director has threatened to quit. What do you do? a) Instagram a pouty selfie, b) tweet about how sad and mad you are, or c) start a student-run organization to express solidarity with the musicians, write letters to orchestra board members and elected officials, form a youth orchestra, perform at rallies and march in parades?

On May 2, 2013, students Emily Green and Grant Luhmann co-founded YMM (Young Musicians of Minnesota) “because we were tired of idly sitting by and seeing our Minnesota Orchestra musicians without jobs and without their passion, which was making music,” Green says. “We wanted to stand up and show how the lockout was not only affecting the musicians, but it was affecting the young students of Minnesota as well – the young musicians.” They started a Facebook page that drew more than 300 likes in a few hours. (Luhmann is now at Indiana University, leaving Green in charge.)

Early on, video journalist Matt Peiken heard about YMM and profiled them for his classical music website MNuet.com. They met outside Ferguson Hall at the U of M, where about 65 young musicians, most wearing green “Support Minnesota Orchestra Musicians” T-shirts, had gathered for a letter-writing event. They talked about what the Minnesota Orchestra meant to them and why they wanted the lockout to end. (Peiken closed MNuet.com when he moved to Cincinnati; the video is available on YouTube.)

The students also wrote an open letter to the musicians, saying, in part: “It is my hope that our letters to you help you understand just how much you mean to us, and just how hard we will fight to bring you back to the stage and receive fair compensation for the wonders you create … And at your next concert, we will applaud the loudest, for we, the students, will be silent no more. We are the Young Musicians of Minnesota, and we stand with you. Stay strong.”

The musicians were deeply touched by the letter. Laureano remembers, “That they cared enough to actually stand up for us, at a time when we needed support from the general public, was very gratifying … I really admired these kids for being able to organize as they did, as quickly as they did, with the kind of guts they showed.” YMM came up in the musicians’ meetings during the lockout. “We were talking about how important the struggle we were facing was,” says Laureano. “I said, ‘This is not just about us … We are heroes to these kids, and we have to stay united.’”

“Their heroes were under fire, and they felt the fire, too,” says Ken Huber of Orchestrate Excellence (OX), one of two grassroots citizens’ groups that formed during the lockout. “They became very engaged in a way that is kind of unprecedented. When they saw what was happening to the musicians, they thought, ‘This could happen to me.’”

In August of 2013, when OX brought Aspen Music festival CEO Alan Fletcher to town to talk about the lockout, members of YMM performed outside Westminster Presbyterian Church as people arrived. A few weeks earlier, YMM members had played a flash mob concert on Nicollet Mall outside the headquarters of US Bank, whose CEO, Richard Davis, was leading the orchestra’s contract negotiations. Davis did not appear, but the kids made the evening news. 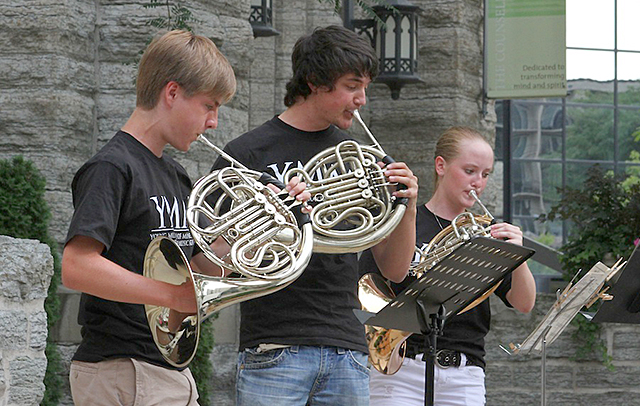 MinnPost photo by John WhitingMembers of Young Musicians of Minnesota playing outside Westminster prior to Aspen CEO Alan Fletcher’s forum for Orchestrate Excellence.

By then, YMM was also involved with Save Our Symphony Minnesota (SOSMN), the other, more vociferous grassroots citizens’ group. They had gotten in on the ground floor of SOSMN, attending organizational meetings in July. “They participated fully,” says Mariellen Jacobson, SOSMN’s chair. “I was impressed by their intelligence and their perspective on how important [the lockout] was to them personally, because it affected their teachers and their own aspirations. I was impressed by their energy and their follow-through. They weren’t like kids attending an adult meeting. They were full collaborators with us from the beginning.”

Wearing their green T-shirts, YMM joined SOSMN at two rallies in September outside Orchestra Hall, one in protest of a private party management was holding for patrons, the other opposing the Symphony Ball and Crash the Ball events. They made signs; they played music. “They were so good at taking responsibility,” Jacobson says. “They didn’t need us to hold their hands. We didn’t have to worry about them showing up or not showing up. They just delivered.” At the Ball rally, Emily Green gave a speech before a crowd of 300.

Meanwhile, YMM had formed a summer youth symphony of 46 students and played two free concerts at Breck and MacPhail to honor and support the locked-out musicians. Conducted by YMM member and recent U of M graduate Aaron Hirsch, they were joined onstage by Minnesota Orchestra musicians Laureano, bassist Robert Anderson, violinists Pamela Arnstein, Deborah Serafini and Michael Sutton, violist Thomas Turner, and cellists Sachiva Isomura and Pitnarry Shin. During the State Fair, YMM spent a weekend with the musicians at the Labor Pavilion, forming chamber ensembles and giving nine performances over two days. On Monday – Labor Day – they walked the parade together. When the musicians gave a free concert at Lake Harriet in mid-September, YMM sold merchandise, greeted audience members, and gathered names for the musicians’ email newsletters.

On Oct. 1, Osmo Vänskä resigned. Green remembers that as YMM’s darkest day. “I know a lot of students who were at school when they heard the announcement,” she says, “and a lot of them went home or they went into the bathroom and cried. I was in a practice room at my school when I found out. I just sat there and looked at my music and said, ‘What do we do next? Where do we go?’ ” They rallied in time to perform at We Day on Oct. 7, a giant festival for socially active youth at Xcel Center. On Dec. 21, they gave another free concert, performing side-by-side with musicians including Laureano, principal cello Tony Ross and assistant principal viola Rebecca Albers.

Did Green ever consider giving up? “Not really. There were really hard times when I thought, ‘Is this all worth it?’ But I knew that YMM giving up would convey to the community that we had no hope for the lockout, and through the whole thing, I did have hope that a resolution would be found.”

On Jan. 14, after more than 15 months, the lockout finally ended. The musicians approved a new contract and agreed to return to work on Feb. 1. YMM did what any agile, resilient 21st-century organization would do: They shifted their focus from expressing solidarity with the musicians to promoting classical music among other young musicians. But they made it known they wanted Vänskä to return as music director. At one of February’s “homecoming” concerts at Orchestra Hall, they wore blue-and-white in support of SOSMN’s “Finnish It!” campaign and unfurled a giant banner from the balcony.

Green took that opportunity to speak with outgoing Minnesota Orchestra CEO Michael Henson. “I was in the lobby talking to a couple of the musicians, and I saw Michael Henson across the lobby, and he was talking to some people, and I was like, ‘Hey, I should go introduce myself because he’s maybe heard of me.’ So I walked up to him and tapped on his shoulder lightly, and he spun around and I said, ‘Can I introduce myself?’

“He nodded his head and I told him I was Emily Green, the co-founder of YMM, and I said that the Minnesota Orchestra lockout inspired YMM to form and he inspired YMM to form as well, and without the lockout we wouldn’t have YMM today, and I’m really glad that the Minnesota Orchestra is back and they sounded wonderful. Then I said, ‘I’ve been watching you closely, because I hope one day to have a job just like you, if not your job.’”

What did Henson say in return? “Not a lot … He kind of nodded his head, and I think he said something like, ‘The orchestra sounded great tonight, I’m glad you could come to the concert,’ and then I said good-bye and left.”

This summer, YMM held a music festival, free to advanced music students looking for a performance opportunity. Now with 72 students, up from last summer’s 46, the youth orchestra rehearsed for four hours on Sundays, with members coming from as far away as Rochester and Owatonna. They’ll perform their summer finale concert this Friday, with music by Wagner, Glazunov and Tchaikovsky.

A bigger orchestra needs a bigger stage and room for a larger audience than either Breck or MacPhail can hold, so YMM has rented the Ted Mann Concert Hall, where the musicians of the Minnesota Orchestra performed during the lockout. Renting the Ted Mann costs between $4,000 and $4,500. YMM launched a Kickstarter campaign that has so far raised $4,905. The concert is at 7 p.m. and free. The Minnesota Orchestra musicians are now on vacation and many are out of town, but bassist Anderson, violist Sifei Cheng, and violinists Serafini and Jean Marker De Vere have said they will come and play.

We may see more of YMM when the Minnesota Orchestra returns this fall. Although much of this is still in the exploratory stages, conversations are under way about how to develop a stronger relationship between YMM and the MOA. More performances in the lobby before concerts? More opportunities for young musicians to play with professional musicians? More resources for students?

“People are saying that classical music is a dying art and that young students aren’t interested in it anymore,” Green says. “YMM makes it a clear fact that it is not a dying art because YMM continues to grow every day. And classical music, if you ask me, is thriving more than ever.”