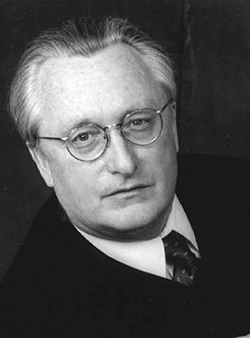 Bain Boehlke, who founded Minneapolis’ Jungle Theater 25 years ago in a storefront at the corner of Lake and Lyndale, will retire in 2015, the Jungle has announced. He’ll be leaving a Twin Cities institution that has its own home (around the corner from the storefront), a passionate following, a national reputation for excellence and a healthy bottom line. The Jungle’s siting in Lyn-Lake has been called “a flagship example of the transformative power of the performing arts.”

Boehlke’s departure will be noticed, and not only in the lobby after performances. In 24 seasons he has directed, designed and/or appeared in most of the Jungle’s 110-plus productions. When he started the theater at age 50, he brought years of experience at the Children’s Theater Company, where he was associate artistic director and a leading actor, and his touring company Theatre on the Road. Boehlke received the 2011 Ivey Awards Lifetime Achievement Award, was named Distinguished Artist of the Year in 2009 by the McKnight Foundation, and in 2001 received the McKnight Fellowship for Theater Arts.

“As we get ready to mark our 25th Anniversary Season, it seemed like a good time to take leave,” Boehlke said in a statement. “I’m so proud of the Jungle … I have every confidence that the Jungle’s future is secure.” He will step down from his duties as artistic director but plans to stay connected to the theater. His last official day is June 30, 2015. Maybe he and Joe Dowling will meet for a drink. That’s Dowling’s final day as the Guthrie’s chief.

Talk of the Stacks, a program of the Friends of the Hennepin County Library, has revealed its fall lineup. Aug. 11: New York Times bestselling author J.A. Jance reads from “Remains of Innocence,” her new Joanna Brady thriller. Sept. 10: Minnesota author Lorna Landvik launches her new novel, “Best to Laugh,” about a Minnesota comedian trying to make it big in Hollywood. Oct. 11: Psychologist and linguist Steve Pinker presents his latest, “The Sense of Style: The Thinking Person’s Guide to Writing in the 21st Century.” Oct. 30: Food & Wine editor-in-chief Dana Cowin discusses her new cookbook, “Mastering My Mistakes in the Kitchen,” with Andrew Zimmern. Nov. 18: poet Michael Bazzett, winner of Milkweed Editions’ 2014 Lindquist & Vennum Prize for Poetry, shares his winning collection, “You Must Remember This.” All events are at 7 p.m. at Minneapolis Central Library, free and open to the public. FMI. MinnPost is a Talk of the Stacks supporter.

For artists: Applications are now being accepted for the 2014/15 Jerome Foundation Fellowships for Emerging Artists. The amount of this fellowship for visual artists – in the early stages of their careers, who have not yet attained professional acknowledgment commensurate with the quality of their work, and who can present their work in a gallery context – has been raised to $12,000 each for the new fellowship year. Deadline: noon on Friday, Sept. 19. Online application site here. Note the free information sessions on Aug. 5, 11 and 20.

Thursday at Common Good Books: Susan Barbieri discusses “Candyland in the Twin Cities: Popcorn, Toffee, Brittle, and Bark.” We’re all kids in a candy store when we step into Candyland, the St. Paul landmark (now with sugared branches in Minneapolis and Stillwater). St. Paul writer and journalist Susan M. Barbieri tells the sweet tale of the former Flavo Corn and its homemade treats. A pound of the white-chocolate pretzels, please. 7 p.m. Free.

Friday at the Wellstone Center in St. Paul: Charles Eisenstein. How can small, individual acts of courage and kindness change our culture’s story of separation? In his new book, “The More Beautiful World Our Hearts Know Is Possible,” the popular teacher, speaker, author, and “de-growth” activist invites us to explore a new understanding of self, life and world. His public talk begins at 6:30 p.m. There’s a catered community dinner with music and movement beforehand. FMI and tickets. ($20 talk).

Saturday in Tangletown in Minneapolis: the annual Tangletown Gardens Art & Garden Tour. Gorgeous gardens, art from Gallery 360 and the Grand Hand and light refreshments from Wise Acre. The tenth annual tour showcases gardens large and small, elegant and quirky. With art integrated into the natural settings, each space becomes an outdoor gallery. The artists and gardeners are on site to answer questions and discuss their work. Proceeds help fund public art, charities, and garden projects throughout the Twin Cities. 9 a.m. – 4 p.m. Tickets at Tangletown Gardens, the Grand Hand, Solo Vino or Gallery 360 ($25 in advance, $30 day-of). Tour map at Tangletown Gardens on Saturday after 9 a.m.

Saturday at Orchestra Hall in Minneapolis: “Die Fledermaus.” Sommerfest ends with the most famous of all Viennese operettas, a bubbly concoction of champagne, humor, temptation and revenge. Johann Strauss Jr.’s great entertainment is given a semi-staged performance by the Minnesota Orchestra with Andrew Litton at the podium and soloists Barbara Shirvis, Philip Cutlip, Sarah Lawrence, Robb Asklof, and Christina Baldwin as Prince Orlofsky. 7:30 p.m. FMI and tickets ($30–$100).

Scary movies are scary, but scary live theater is scarier. Something happens when the lights go out and there are real people on stage … or maybe they’re not on stage. Maybe they’re moving in your direction. Tickets and passes are on sale now to Twin Cities Horror Festival III at the Southern ($13 individual tickets, multi-show passes $45 and $65). Monstoberfest moves into HUGE Theater every weekend in September and October. “Creature Feature: The Improvised Monster Movie” returns, as does “Star Trek: The Next Improvisation.” Tickets available Aug. 20 at the website or the box office.