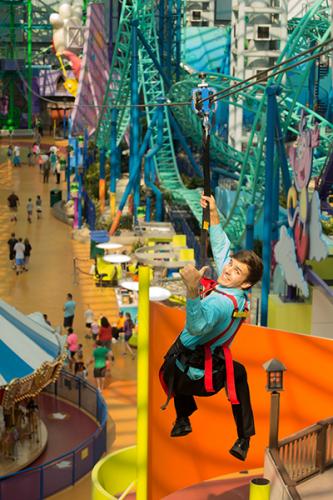 The Mall of America. What’s it really like? To some of us, it’s as familiar as our own backyard, if bigger. To others, it’s that mysterious leviathan in Bloomington. (Almost 5 million square feet? Seriously?) Ever on the lookout for ways to spread the word, MOA’s marketing department has hit a home run with its new YouTube series “The Intern.”

Apple Valley native Jacob Voss stars as a suit-and-tie-wearing, briefcase-toting, fresh-faced and eager young intern who loves working at the Mall and will do whatever it takes: dive into a shark tank, climb a crane, count costumes, ride the new zip line, learn to speak Klingon. “It worked out insanely perfect because he is our actual intern,” says public relations manager Sarah Schmidt. “He’s just a fun-loving, goofy guy who’s up for anything.”

Dan Jasper, VP of communications, remembers interviewing Voss over Skype for the intern position. “The hilarious thing was, he was in a suit and tie and had a briefcase sitting next to him. He’s an I’ll-do-anything-to-get-the-job person, which is what you love in an intern.” When a member of the marketing department came up with the video series idea, Jasper brought Voss in for a meeting. “Afterward, all three of us went – oh my God! That’s exactly who we want.”

The videos have a Fringe feel. They’re tongue-in-cheek and over-the-top. (No, interns don’t really dive into shark tanks.) Along the way, you learn that the MOA has an aquarium, a “Star Trek” exhibit, a store that makes giant cookies, a big amusement park, a construction site (it’s expanding) and a security department with dogs. “We have such a wide demographic,” Schmidt says. “Our guests range anywhere from 2 to 92. We’re showing people what we have here in a new way.” Each video is a little over two minutes long. Plans are to film another six episodes in the fall. By then, Voss will have returned to school at Loyola University in Chicago. MOA should bring him back, briefcase and all.

The North American Festival of Wales is the largest Welsh cultural festival in the nation. After a 15-year absence, it’s returning to the Twin Cities on Labor Day weekend (Aug. 28–31), and attendees will come from around the world. Not surprisingly, NAFOW is rich in the arts: music, film, a Reader’s Theatre-style performance of Dylan Thomas’ “Under Milk Wood,” a singing and recitation competition, a tour of the holy wells of Wales in poetry and photographs. For most events and activities, you’ll need a festival pass ($20–$65, free for under 18), but some are open to the public without a pass. Anyone may attend the opening ceremony Thursday featuring the Apollo Male Chorus, and the opening concert by the Welsh-American acoustic project Tramor ($25; $10 under 18), the Grand Concert on Saturday by the internationally renowned, “honed and toned” Welsh male choir Only Men Aloud ($40; $10 under 18), and Sunday’s worship service (in English and Welsh) at Westminster Presbyterian. FMI, program and registration.

Want cheaper tickets to “The Book of Mormon”? A limited number will be available for $25 each in a pre-show lottery before each performance. Show up at the Orpheum 2½ hours prior to the show, enter the lottery, and stick around for the random drawing of names. One entry per person, up to two tickets, valid ID, cash only. Subject to availability but worth a try. The show runs Aug. 20 to Sept. 14. FMI.

Opens tonight (Thursday, Aug. 7) at the Ordway: “Broadway Songbook: The First 100 Years of Broadway.” If you love musicals, don’t miss this chance to hear songs from “Annie Get Your Gun,” “Fiddler on the Roof,” “The Music Man,” “Show Boat,” “Oklahoma!,” “Gypsy” and more great shows. Directed by James Rocco, who interjects stories about the composers and their music, it’s performed by an ensemble of Twin Cities artists including Dieter Bierbrauer, Jennifer Eckes, Aja Parham and Erin Schwab. 7:30 p.m. tonight, Friday, Saturday and Sunday nights; matinees at 2 p.m. Saturday and Sunday. Best available seats are Friday, Saturday, and Sunday night. FMI and tickets ($37). Starting in October, this show hits the road, with performances in Austin, Red Wing, Dawson, Detroit Lakes and St. Cloud.

Friday at the American Swedish Institute: Finnish textile artist Siiri Korhonen begins her artist-in-residency in the Turnblad Mansion. A teaching artist at the University of Helsinki and Aalto University, she’ll demonstrate the process of ryijy rug making, sharing her love of the craft and her insights on color, composition and design. Today and Saturday from noon until 4 p.m. Also Wednesday, Aug. 13 from 4 to 8 p.m., and again next Friday and Sunday from noon until 4. Museum admission required. At 10:30 a.m. on Saturday, Aug. 16, Korhonen will lead a 45-minute walking tour of the exhibition “The Living Tradition of Ryijy – Finnish Rugs and Their Makers.” $5 plus museum admission. Call right now (612-871-4907) to reserve the tour if you want to go; it’s already half sold out.

Saturday at the Mall of America: Greyhound Centennial Tour. Did you know the Greyhound Bus Company got its start in Hibbing? We didn’t, until we read Joe Kimball’s piece on the 100th Anniversary exhibit. For just one day, visitors can tour a bus converted into a mobile museum and four fully-restored classic coaches. In the North Lot and the Southeast Court, 10 a.m. – 9:30 p.m. Free.

Saturday at the Nicollet: What Would Monk Do? Some of us remember that brief, shining moment not too long ago when the coffee shop at Nicollet and Franklin featured live jazz. Under new ownership, they’re trying again, and they’re starting with this excellent quartet that specializes in music by Thelonious Monk both familiar and obscure. With Steve Kenny on trumpet, Peter Schimke on keys, Brian Courage on bass and former AQ owner Kenny Horst on drums. WWMD was a favorite at the AQ. 8 p.m. FMI. No cover, but don’t be surprised to see a tip jar.

Imagine a dinner-party picnic on a summer evening at a mysterious and verdant location somewhere in the Twin Cities. Everyone is dressed in white; everyone has brought something to share. Tables and chairs are provided. How romantic is that? After a successful first year on Boom Island in St. Paul (500 people attended), the PopUp Dinner returns on Saturday, Aug. 16, this time in Minneapolis. Tickets are $35; 10 percent will go to the Minneapolis Parks Foundation. A 21+ event. FMI. Email popup.twincities@gmail.com to receive a link.