Peter Rothstein is living the dream. He has two plays opening this weekend, Shakespeare’s “Romeo and Juliet” at Open Book and Terrence McNally’s “Master Class,” a fictionalized account of the time soprano Maria Callas spent coaching students at Juilliard, at MacPhail Center for Music. He’s directing the Shakespeare for Ten Thousand Things and the McNally for his own Theater Latté Da. This is his fourth time working for TTT, his first Shakespeare, and his second go at “Master Class,” which he directed for Park Square Theater in 2001.

We started off talking about “Romeo and Juliet.” TTT, if you haven’t yet seen the work of Michelle Helmsley’s innovative company, starts each run in prisons, shelters and other nontraditional spaces before moving into Open Book for public performances. It’s theater in a suitcase, flexible and spare.

MinnPost: Besides the challenges of minimal sets, no lighting, no sound, no backstage, being semi-itinerant and performing in prisons, what is unique about directing for Ten Thousand Things?

Peter Rothstein: Every director should have this challenge on a regular basis, because it’s easy to let those other things distract us. It really gets down to story, and how you use actors to tell a story. That’s thrilling as much as it’s challenging.

One thing that’s so great about Ten Thousand Things is they prioritize actors and pay actors well. When you’re dealing essentially with text and actors, they have to carry 90 percent of the story. Actors want to do the work. It’s satisfying work. So while you’re denied some of the other things, you have the luxury of working with the best actors in the city. I have seven Equity actors in this show. That doesn’t happen very often for me.

MP: Do you find the stripped-down nature of these productions limiting or liberating?

PR: Always liberating. That’s how I grew up. I was directing Broadway musicals on a dime from my early days. Whenever I teach directing, I always say, “Your limitations are your greatest source of creativity.” You end up making choices based on what-ifs. If I can’t have this, then what if this?

In the case of “Romeo and Juliet,” I knew I wanted one of [the leads] to be an actor of color. The Nurse and the Friar are sympathetic characters, the voices of conscience in the play, and I didn’t want them both to be white actors. How do I [treat] family units in a color-blind casting approach? And how do I take a play with 40 characters and tell it with eight actors? Limitations end up exercising your point of view, your theatrical notions and impulses.

MP: This is your first Shakespeare. What was the hardest part?

PR: Probably – and this is often the case – the fear before jumping in. Once I jumped in, I felt quite at ease. First, I needed to tackle the cutting, since I knew we weren’t going to do the whole play.

MP: You did the cutting? 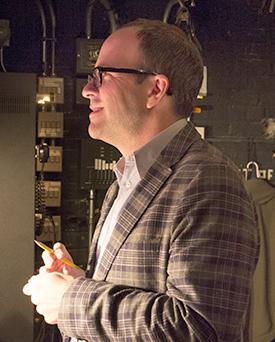 PR: I did all the cutting, and I ended up loving that process. You have to learn a play really well in order to cut it. You have to learn what every word means and track all of the storytelling pieces. It was kind of a full-time job for about two months.

My associate director, Carla Noack, has done a lot of Shakespeare, and I emailed her the first act after I finished the cutting and said, “Have I cut anything sacred or committed blasphemy?” She said, “For some people, cutting a word would be sacrilege, so you have to liberate yourself from that.”

To be honest, I didn’t know enough to know what was sacred and what wasn’t. So for me, it was a matter of what’s the story I need to tell? And how am I going to tell it? How do I distill this story down to its essence?

I honor iambic pentameter across the board. I never lost any rhyme structures. I didn’t lose any antithetical structures that [Shakespeare] built a lot of his language upon – when he takes words that are opposites and builds on them. I really didn’t change a word, and I didn’t rearrange text at all. [But] I bet I cut 35 percent of the play.

MP: What else makes this production different?

PR: The look of it is quite contemporary, because the story transcends time and the language is so boring to people. I wanted contemporary costumes and props so those things would create recognition, not more distance.

So, for example, when the set designer said, “Really, can it not just be a basic bottle? Does it need to be a bottle of Jack Daniels?” I said, “Yes, it has to be a bottle of Jack Daniels.” That wasn’t about being anachronistic for the sake of being clever, but to make the experience more immediate. Because Shakespeare’s theater was anachronistic. He put all of his characters in the dress of the day, even though many of his plays were set in times past.

We thought about a telephone at one point. But if they did have phones, Friar Laurence could have just called Romeo on the phone and we would have a happy ending.

MP: Let’s talk about “Master Class.” Why set it at MacPhail, in Antonello Hall?

PR: A great part of being an itinerant company is I get to say what play I want to do and choose the ideal space or neighborhood for that play … [Antonello] is the right venue for this show, and the acoustics are gorgeous.

The original master classes weren’t in a theater, they were in a recital hall. … The play will begin for people when they walk down the sidewalk into the building, because there will be kids walking up with their cellos and their violin cases.

MP: You’ve directed this play before. What made you want to do it again?

PR: I read it again, and I saw and heard things that didn’t resonate with me as deeply when I was in my early 30s, but they do now. A lot of this play is about a singer at the end of her career. When a voice is their instrument, their livelihood, their art, and they don’t have a voice anymore, what’s left? What is their legacy? For Callas, singing was a live art form. She wasn’t known for having a beautiful voice. She was known for her incredible interpretation and her acting. So her CDs are only a fraction of what she gave to the art form.

So much about this play is about legacy. When you don’t have children, what do you leave behind in the world?

MP: Are you having those thoughts yourself?

MP: So this play feels more personal to you now than it did before.

MP: Are you approaching it differently?

PR: I am. And it’s interesting to talk about this against “Romeo and Juliet” when they’re so wildly different. My work with Ten Thousand Things has given me confidence in what I need or don’t need to create a piece of theater. So there will be only two light cues in “Master Class.” There’s no scenery, no bells and whistles. It’ll be house lights up, house lights down.

The Park Square production, while relatively simple, had a few bells and whistles and scenic tricks. This one will be much more stripped down, much more exposed. It’s going to be a pretty poignant telling.

MP: What is it like having two plays going at once?

PR: In this business, you’re just so lucky to work. The riches of it are a real luxury, but the work is most satisfying when you can completely immerse yourself and lose yourself in the given world of a play. Now I get to do that in two plays. But you have to be careful. I knew “Master Class” intimately, and I needed to make sure I had “Romeo and Juliet” on its feet before I could start to think about “Master Class.” … I haven’t done this in a long time, and I wouldn’t recommend it unless it’s work you really know.