The new Concert Hall at the Ordway will open to the public on March 1, 2015, with an open house followed in rapid succession by an eclectic line-up of performances: the SPCO, the Schubert Club, Ananya Dance, Cantus, Haley Bonar, Sounds of Blackness, a Liquid Music concert by Helado Negro, a Schubert Club scholarship competition winners’ recital and more.

At the moment, less than five short months away, the $42-million project is a pounding, banging, screaming, sparks-flying construction site.

Late last week, I donned a hard hat and a yellow safety vest for a tour led by Andrew Luft, the Ordway’s production director and construction project manager; Greg Hedin, project manager for McGough Construction; and Rebecca Krull Kraling of HGA, whose design principal, Tim Carl, is the lead architect. (You can also see Carl’s elegant, intelligent work in the new Northrop, the addition to the American Swedish Institute, and the Janet Wallace Fine Arts Center.) Much of what we saw will be covered up when the hall is finished: layers and underlayers, conduits, wiring and infrastructure that will make the hall state-of-the-art, multimedia-ready and “future-proof,” able to accept whatever new technology comes along in the next several years.

The Concert Hall has been designed for what Luft calls “a new version of silence.” The 22″ wall between the hall and West 5th Street and the double-slab system on the roof will keep the street noise out. Inside, there will be no loose chairs, no blowers, motors or fans. Lights will be lifted to catwalks or lowered to the floor on cables when bulbs need changing.

The roof has been raised 30 feet to accommodate an audience of 1,097 in the space formerly occupied by the McKnight Theatre, which was built for 306. The original footprint has been extended just 10 feet to the north and 20 feet to the east – not much for a space that will hold more than three times the people. Ordway president and CEO Patricia Mitchell calls it “Bento-box construction.” We’ve been inside the McKnight, and even though the new space is still filled with scaffolding, it feels big. And, from the highest balcony, high. Yet also intimate, as a hall designed primarily for chamber music should feel. Every seat in the house will be within 90 feet of the stage.

All great buildings have their stories. Midway through the tour, Luft told us one about the Concert Hall, calling it “a little ‘Twilight Zone’ woo-woo synchronicity.” Ben Thompson, a St. Paul native, is the architect who designed the 1985 Ordway. In Luft’s words:

“Ben Thompson’s original vision of the Ordway was a music theater and a 1,000-seat concert hall with a glass curtain wall that wrapped around to 5th Street. It didn’t happen. They ran out of money, which precipitated the McKnight and the music theater. Back in 2007, Tim Carl, the design architect for this project from HGA, was asked to do a sketch of what he would do to modernize the Ordway and put in a concert hall. He drew a sketch of a curtain wall that wrapped around 5th Street and a 1,000-seat concert hall. He didn’t know that was Ben Thompson’s vision until a couple of months after the sketch was submitted and approved. So there’s a little bit of coming full circle with this project, which is sort of neat.” 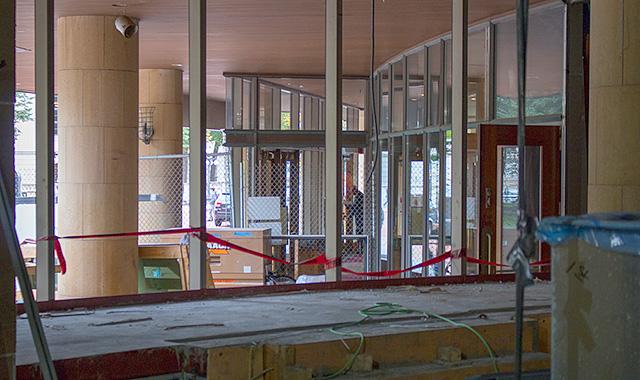 MinnPost photo by John Whiting
Inside the first floor of the Concert Hall, looking toward the Ordway’s main entrance. 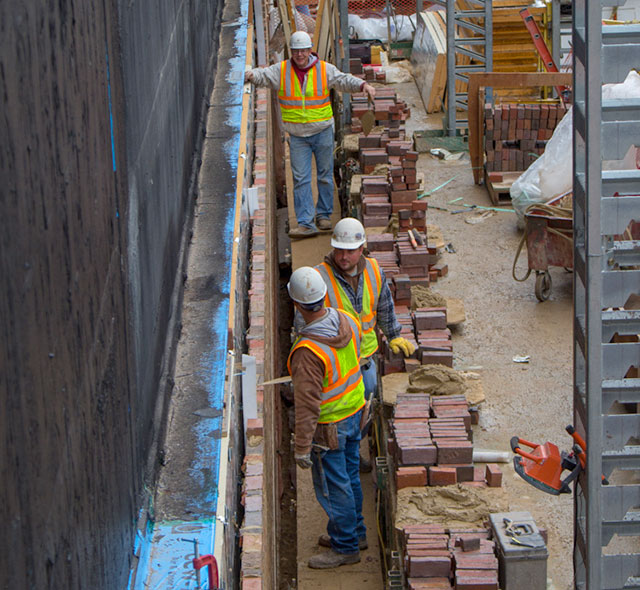 MinnPost photo by John Whiting
Bricklayers install the specially-made waterstruck bricks on the Concert Hall’s exterior. The bricks were manufactured by two companies to match the colors of the original building. One company made one color, the other made the rest. The bricks were combined, sorted, put on pallets and sent to St. Paul, arriving pre-mixed and ready to use. 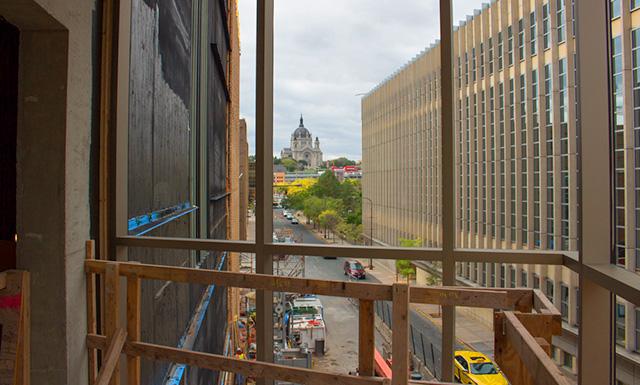 MinnPost photo by John Whiting
The view from inside the third floor glass curtain wall (still waiting for its glass panels) toward St. Paul’s Cathedral. 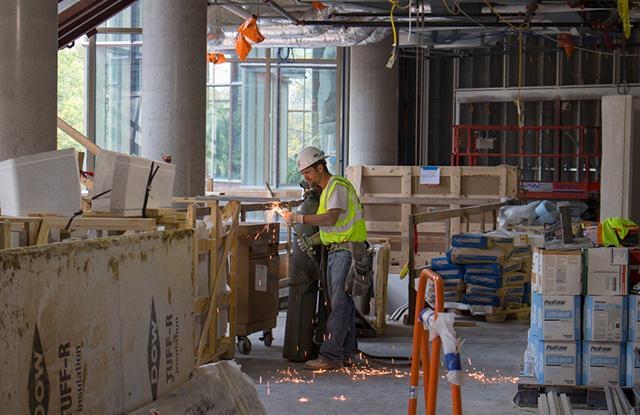 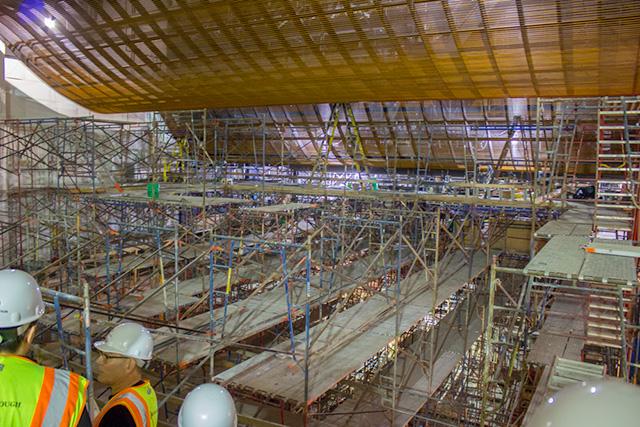 MinnPost photo by John Whiting
Inside the Concert Hall, with its undulating ceiling, looking toward the stage. Made by the Aaron Carlson Corporation in Minneapolis, the ceiling is crafted from 15 miles of mahogany-stained oak dowels. 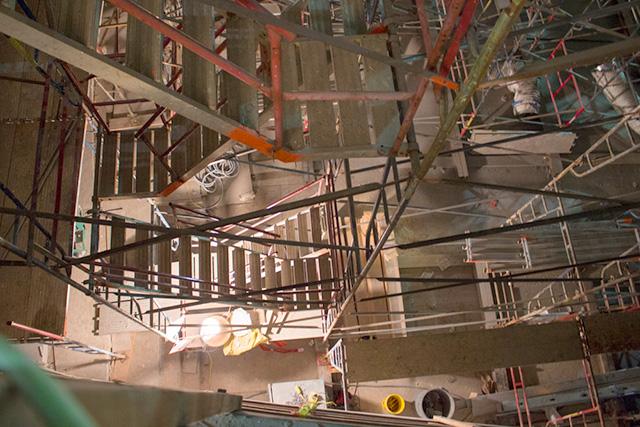 MinnPost photo by John Whiting
Looking down from the third level of the second balcony. 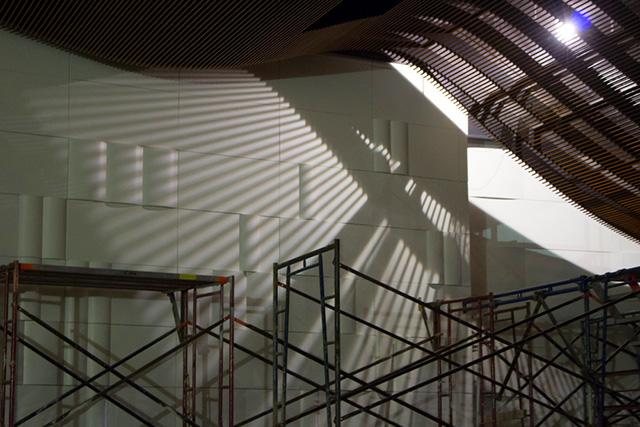 MinnPost photo by John Whiting
The dowel ceiling floats beside the contoured wall panels. Each panel weighs 200 pounds, and there are 10 different shapes, all of which are rotated, making 20 different shapes. Acoustician Paul Scarbrough of Akustiks decided how and where to place each shape to create the desired reverb within the hall.

Go here for more photos of the Concert Hall under construction.

In progress: Checking out the new Ordway Concert Hall