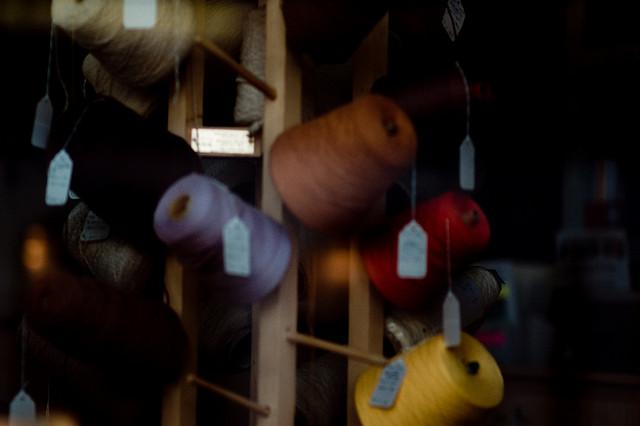 CC/Flickr/smcgee
Reichert is “looking forward to diving into the world of fiber arts.”

Karl Reichert has been named executive director of the Textile Center. For the past eight years, he has served as director of the Capri Theater in North Minneapolis, where he’s done a bang-up job. During his tenure, the Capri has gone from an underutilized movie house to a popular performing arts venue in a culturally diverse, economically challenged part of the city, and a destination for fans of Dennis Spears, Debbie Duncan, Greta Oglesby, Sanford Moore, Regina Marie Williams, Charmin Michelle and other artists who have performed there. The Saint Paul Chamber Orchestra gives free concerts at the Capri each year. Moore by Four will take the stage Nov. 1 and 2; get tickets here ($25).

Pre-Capri, Reichert was a marketing and PR consultant for the arts, fundraising director for R.T. Rybak’s 2001 mayoral campaign, and director of public affairs at the Minnesota Orchestral Association. He will be the Textile Center’s third executive director in 20 years. For the first 18 years, it was led by Margaret Miller, one of the original founders. After she stepped down in 2012, St. Paul interior decorator Tim Fleming was tapped for the post. When he left after 18 months, Nancy J. Lee was named interim director and the Center began a national search.

Margaret Anderson Kelliher, chair of the search committee, said in a statement, “We are grateful to find an exceptional new leader who has a track record with leading roles in arts organizations, experience building great programing and a record of making strong connections to individuals, funders and other arts leaders across Minnesota.” Reichert is “looking forward to diving into the world of fiber arts.” He’ll assume his new post on Nov. 17. We’re excited to see what he’ll do there.

Two Graywolf books are among the finalists for the 2014 National Book Awards in poetry: Fanny Howe’s “Second Childhood” and Claudia Rankine’s “Citizen: An American Lyric.” Graywolf poet Mary Szybist took the 2013 award for her collection “Incarnadine.” Also on the shortlist: the graphic memoir “Can’t We Talk About Something More Pleasant?” by New Yorker cartoonist Roz Chast. This makes Chast the first cartoonist to be a nonfiction finalist. Here’s the list of all the finalists in all four categories.

Due to popular demand, and after a series of rave reviews, Theater Latté Da has added another week to the run of its hit play “Master Class” at MacPhail’s Antonello Hall. If you’ve been dragging your heels or couldn’t score tickets, here’s that second chance we all say we never get. Go online or call 612-339-3003.

The Minnesota Opera is facing a $173,000 deficit for fiscal year 2014 on a budget of $9.8 million, according to a news release issued Wednesday. This is the second year in a row the opera has posted a deficit, after $169,600 in 2013. The most recent deficit follows a season that saw a 14-year-high in subscription sales, annual contributions growing by more than $250,000 over the previous year, and a “Magic Flute” that sold more seats than any production in the opera’s history. President and general director Kevin Ramach said in the release that the opera has already begun making changes to eliminate future deficits and return to balanced budgets. Productions scheduled for the 2014–15 season include Pulitzer Prize winner Kevin Puts’ world premiere of “The Manchurian Candidate” and Bizet’s “Carmen.”

Picks for the weekend and early next week

Today and Saturday at the Weinstein Gallery: “Vera Lutter: Venice.” Unique camera obscura images of a luminous, ghostly, black-and-white Venice – gondolas, churches, palazzos, piazzas. Exposed directly onto photographic paper over long periods of time (hours to weeks), they’re incredibly detailed and deeply strange. One of the world’s most horribly crowded tourist destinations, Venice seems somehow empty of people, until you realize that no one stood still long enough to register on Lutter’s images. And then you start seeing, or think you’re seeing, spectres and shadows. 12–5 p.m. Friday and Saturday. Closes Oct. 24.

Opens tonight at the Film Society’s St. Anthony Main Theatre: “Fishing Without Nets.” Shot in East Africa and featuring Kenyan actors of Somali descent, director Cutter Hodierne’s action thriller is the story of a struggling young Somali fisherman who turns to piracy to support his family. FMI, trailer and tickets ($6–$8.50).

Opens tonight at Intermedia Arts: Theatre Pro Rata’s “1984.” Orwell’s downer wasn’t the original dystopian novel — that was Yevgeny Zamyatin’s “We” — but it’s probably the most famous, or was before “The Hunger Games.” John Middleton is interrogator O’Brien in Michael Gene Sullivan’s stage adaptation, directed by Carin Bratlie. 7:30 p.m. FMI and tickets ($14–$41, sliding scale at the door). Through Oct. 26.

Sunday at the Rondo Library: Cory Doctorow presents “In Real Life.” Written for young adults, illustrated by cartoonist Jen Wang, Doctorow’s first graphic novel looks at adolescence, gaming, poverty, and culture clash. Doctorow is a journalist, activist, and award-winning science fiction writer, a fellow of the Electronic Frontier Foundation and a columnist for many magazines and newspapers. Forbes named him one of the web’s 25 influencers. 2 p.m. Free.

Sunday at Central Lutheran Church: Dominick Argento World Premiere. Under the direction of William Schrickel, the Metropolitan Symphony Orchestra opens its 33rd season with soprano Maria Jette singing the world premiere of Argento’s “Ode to the West Wind.” Argento wrote the piece, a setting of Shelley’s ode, in 1956, when he was still a student at the Eastman School. It was played through once that year in a private concert but never published. So this will be a first. The program also includes Rachmaninov’s “Symphonic Dances.” 4 p.m. Free; donations requested.

Monday at Merriam Park Library: “Who Shares in the Blessings of Liberty? Women and the New American Nation.” First in a series of lectures by Professor Jill Zahniser on women’s history leading up to the suffrage movement. 7 p.m. Free. FMI.

On sale today (Friday, Oct. 17) at 10 a.m.: Lisa Fischer at the Dakota. The real star of the Grammy-winning documentary about back-up singers, “Twenty Feet from Stardom,” Fischer has been touring on her own, knocking audiences dead wherever she goes. She sold out two Dakota shows in September, and we’ve just learned that she’s coming back Dec. 9, 10 and 11 for two shows each night. Don’t sleep on this one. We caught about 15 minutes of one of her summer festival shows, and she’s unlike anyone we’ve ever seen. Call 612-332-5200 or go online. Tickets $40–$60.

Hosted by the U’s College of Continuing Education, Headliners never announces a whole season of speakers ahead of time because their selection depends on the latest news. On Thursday, Nov. 6, the topic will be “Ebola: Rethinking Global Emergency Response,” and the speaker will be Dr. Jeff Bender, a former infectious disease epidemiologist for the Minnesota Department of Health, now professor at the College of Veterinary Medicine and School of Public Health and co-director of the Upper Midwest Agricultural Safety and Health Center. 7 p.m. FMI and registration ($15).